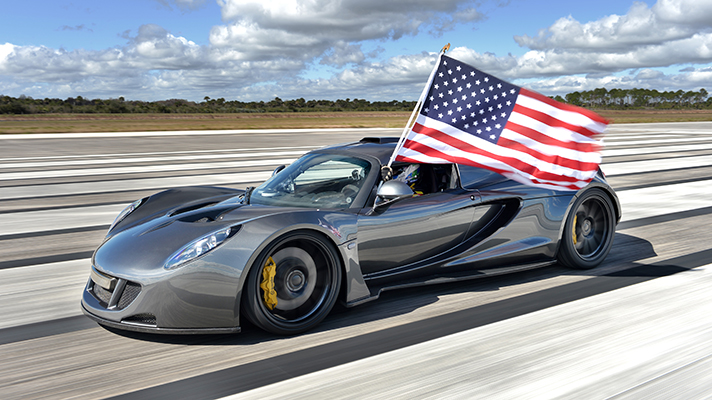 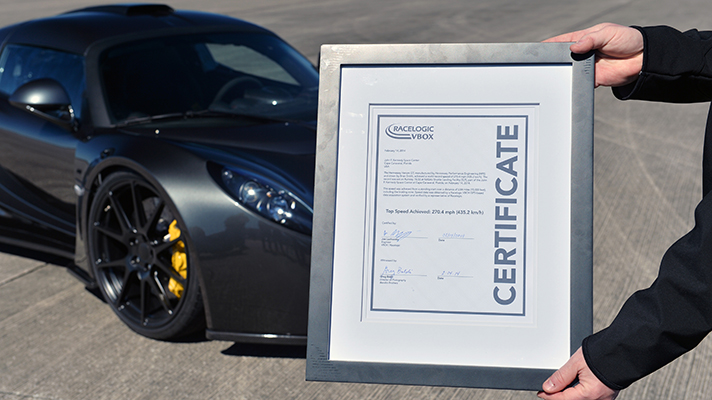 Top Gear can exclusively reveal the Hennessey Venom has hit 270.49mph at the Kennedy Space Center, the highest speed ever recorded by a production car.

The 1,244bhp Venom clocked its record-breaking figure in the hands of test pilot Brian Smith on February 14 on Florida's Space Shuttle landing runway. Its run eclipses the v-max of the Bugatti Veyron Super Sport, which clocked 269.86mph on the Ehra-Lessien test track in 2010.

You can watch footage of the run below, but suffice to say the stats are astonishing. According to the official VBox figures, the Venom - powered by a 7.0-litre twin-turbo GM-sourced V8, remember - accelerated from 20mph to 120mph in just 7.71 seconds, pulling a maximum 1.2g of longitudinal acceleration as it went.

Perhaps even more impressive, the Venom went from 120mph to 220mph in a fraction under ten seconds. That's extraordinary acceleration, even for a car that holds the 0-200mph record. Achieving the final 10mph took just ten seconds, a zone Smith described as just a little sketchy. 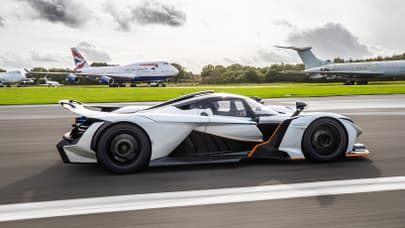 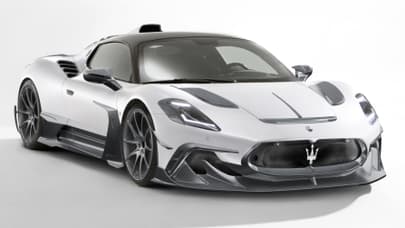 Check out Mansory’s plans for a modified Maserati MC20

"At the very top end, there was a little wandering, but hey, we're going 270mph!" says the former Michelin tyre test engineer. "It was still pulling. If we could run on an eight-mile oval, we could go faster than that..."

But the Venom didn't have an eight-mile oval with play with, rather a runway that is, by the standards of v-max runs, somewhat on the snug side at just 3.22 miles. The Ehra-Lessien straight measures some 5.5 miles, with curved banking at the end. The Space Center's runway ends in ‘grass and a ditch'.

Which meant Smith had to get hard on the brakes after clocking 270mph. The Venom decelerated from its v-max to 70mph in just under 1000 metres, which might sound a long way but, when you consider it was covering over 120 metres every second at its quickest, is a mighty impressive feat.

However. Despite going quicker than the Veyron Super Sport, the Venom can't call itself the fastest production car in the world, at least not in the eyes of Guinness. See, to qualify for a Guinness speed record, a car must make two runs, one in either direction, with the two top speeds averaged out for the official time.

In 2010, the Veyron SuperSport hit 265.96mph on its upwind leg, and 269.86mph on its downwind leg. Neither figure, as you'll notice, is as rapid as the Venom's 270.49mph. So why didn't Hennessey do another run in the opposite direction? Blame the space dudes.

"We wanted to run in both directions, but the NASA guys wouldn't let us. Getting into NASA isn't easy. It was a two-year process," company boss John Hennessey told Top Gear. He confirmed the car would have been mechanically fine for a return run, and that the single run didn't take advantage of any significant wind assistance. "The morning was relatively calm, about a 3mph quarter-crosswind. If we'd run in both directions, the result would have been pretty much the same."

Even if the Venom had run in both directions, Hennessey says it couldn't have qualified for a Guinness record. "For whatever reason, Guinness made a decision that to qualify [for a production car world record], you have to build 30 units," John told us. "We're only making 29 Venom GTs. To date we've built and delivered 11."

Like Smith, Hennessey believes the Venom could have gone even faster on a longer runway. "Looking at the rate of acceleration, we're still pulling around 1mph per second at 270mph," he says. "With another mile to run, I believe the car could do 275. Maybe 280..."

Even so, Hennessey is pleased with the result. "Since the inception of the Venom GT, it's been a dream of ours to build the fastest car. There are lots of different definitions, different metrics, but for us, when people talk about being the fastest, it's about being the absolute fastest. So it was a good day. We achieved the goal. No other road car has broken 270mph..."

Despite the inevitable comparisons, Hennessey doesn't see the Venom GT as a Bugatti Veyron competitor. "They're completely different cars," he says. "We aim not just to be the most powerful, but also the lightest. That thing [the Veyron] is a Bentley GT, a comfortable car."

So what next for the Venom? Hennessey says there are no further v-max runs planned, but that the Venom's next targets are track-based. "We'd like to switch gearing, and look at validating performance numbers on some well-known race circuits around the world."

Including the Top Gear test track? Yes, says Hennessey. "I think we could be the fastest at Dunsfold. We could go into the very low teens [i.e. a lap time somewhere around 1m13s] with Stig in the driving seat. That would be a bigger validation than breaking 270mph..."