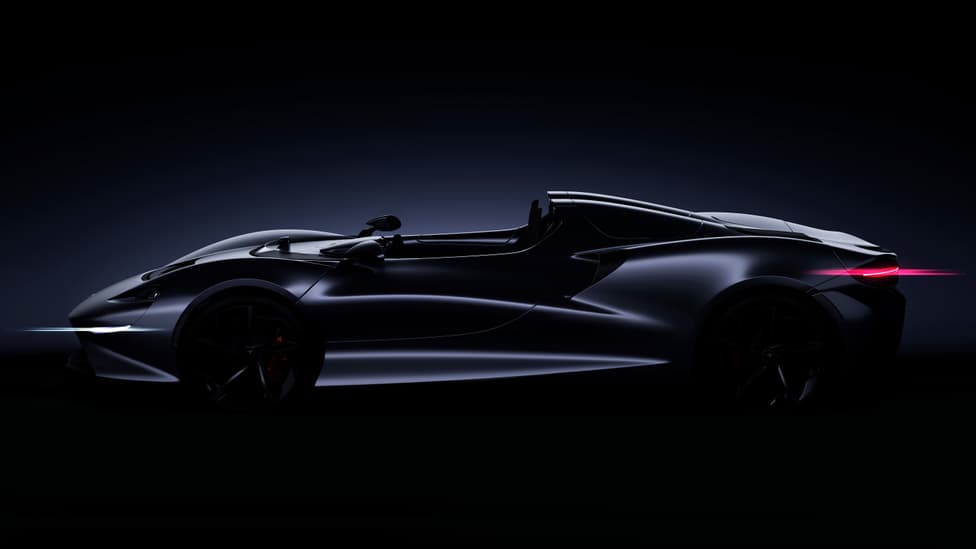 According to McLaren, this hyperthing will take “road-focused driving pleasure to new levels”. Welcome then, to the… well, we don’t know yet. It hasn’t got a name. But it has got a punch.

McLaren tell us this dramatically styled open-cockpit roadster and its dihedral, low profile doors will join the top-tier Ultimate Series line up in about a year and a half, based on similar architecture that underpins the Senna and 720S. And while unique, it’ll still pack a non-hybrid, twin-turbo V8 to save mass and boost the power to weight ratio.

Indeed, while the Senna tips the scales at 1,309kg and has 789bhp on tap, this new roadster will be lighter than that car – indeed, the lightest McLaren ever built – and have as much, if not more, power.

It’ll feature a dual-clutch gearbox, so there’s no manual option, sadly. McLaren boss Mike Flewitt told TG that “it’s incredibly difficult nowadays to engineer a manual back into a mid-engined car with this kind of torque. It would be a nightmare”.

Flewitt, no doubt a little miffed that news of this Ultimate Series Roadster leaked 18 months ahead of schedule, told TG a little more about the project. “If I go back to 2013, when I wrote the business plan, we thought it was going to be about two thirds Sports Series, one third Super Series and then one Ultimate Series car every 10 years. And we kind of got that wrong. But wrong in a nice way.

“The demand for the more exclusive, higher-end vehicles is much stronger than anything else. In a sense it’s almost harder in the more competitive area, like Sport Series, where there’s some serious established competition.

“So for the next Ultimate it was about coming up with a new, exciting concept, not just doing Senna 2.0, Speedtail 2.0. Something different. So we came up with this idea for a car, an open cockpit roadster.

“It’s not a hybrid - we looked at that but it adds a lot of weight. It’s quite minimalist in terms of the screen and roof. It’s not a high downforce car like the Senna.”

While he admitted that it’s possible to take this roadster onto a track, “it’s more of an exciting, unique road car”. There’s no active aero, Flewitt tells us, “but at the front there’s been a lot of work on producing an air curtain to protect the cabin. So it’s using the air not so much for downforce as to build protection. It is also designed to have a deployable screen”.

Is it like the Ferrari Monza, the car it most closely competes against? “Oooh, it’s a lot better looking than that,” Flewitt laughed. “Only joking. But I do think it’s more interesting.”