Which one of these £70k+ track-honed drivers' cars offers the better thrills?

Sorry, Renault. You’ll get no sympathy here. This is not your plucky, underdog hot hatch versus a sports car superpower battle. There will be no ‘moral victory’.

Here’s why. The new Porsche 718 Cayman GT4, with its honed spoilers, racier engine and Porsche badges, costs £75,348. The new Megane RS Trophy R – a five-door hatchback that seats two, powered by a 1.8-litre engine that’s almost 100bhp down on the Porsche – costs £72,140. It’s a mere £3,208 less expensive. This isn’t some fluffy, throwaway experiment. These two are, incredibly, laser-aligned rivals.

“Aha!” you’re thinking. “The Renault only costs seventy grand if it comes with optional Nürburgring Record Pack carbon wheels, ceramic brakes and all the boxes ticked. None will really get specced like that.”

Wrong. This is that Trophy R. Carbon wheels, zero-fade brakes and all (or rather, none) of the trimmings. The most extreme, most expensive hot hatchback ever made. And they’re all sold out. No room for excuses.

Both cars are road legal but live for the track. Oh look, we’re at Portimao. I gravitate to the Cayman first to set the benchmark. It has its own hurdle to overcome: to be, somehow, palpably better than the last Cayman GT4. One of the greatest sports cars of the past decade and beyond. Perhaps the greatest.

Open pillarless door, drop into snug carbon bucket seat, breathe in rich atmosphere of Alcantara. The Porsche feels expensive, ergonomically spot on, and refreshingly small around you. Same as it ever was. Twist the key, left-handed, so the right hand is free to put the lever in gear. A trick learned from Le Mans starts and replicated in every Porsche since.

The ‘hello, old friend’ bubble is punctured by the noise. A smoother, less rattly, more cultured idle than the old car. I don’t think it’s the new 4.0-litre engine to blame so much as those pesky new emission filters. With the sports tailpipe button prodded it’s bassy, but doesn’t burble with promise.

Off we go. The infamously heavy, long-travel clutch has been rationalised – no longer does it take a full leg press and big-toe stretch to dip the pedal. It’s friendly, this GT4. And still refreshingly simple: manual shift, suspension either firm or firmer, no variable steering weight or ambient-lit torque-vectoring cupholders. Engine in the middle, power to the back, a perfect driving position, and two seats. It feels… definitive. Like this is how a sports car should be, period.

Because it feels so ‘right’, I feel confident. I feel like I can attack, say, this hairpin that’s rushing towards the new, more downforce-hungry splitter at 120mph. No problem. Peerless carbon brake pedal feel reigns it in like a fighter jet snagging the wire on a carrier deck. Pour the steering towards the jagged kerbing. Ba-dum-ba-dum, there’s the apex, and now just bury the throttle, because there’s so much traction and such a fantastically linear delivery of 400bhp it’d be rude not to.

Confidence – the GT4 brims with it. I’m flattered. I’m a hero. I’ll stay out for one more lap. It’s so accurate, it’s addictive, and next time round, I’m carrying a few more miles per hour. So this time, after an even earlier jab of the gas, the rear tyres do, momentarily, release their limpet grip on the searing surface. But thanks to the new zeros and ones typed into the refreshed Cayman’s traction control, it’s more than happy to let me play at rescuing a nano-slide while it hangs a comfy safety net below me and keeps everything in check.

There’s no Drift Mode. No yobbo-matic tech here, just extremely German mathematics harmonising a fabulous chassis and a chuckling loon. It’s delightful. I could do this all day. The unflappable GT4 feels like it could too. Temperatures are stable. The brakes and tyres are happy. Porsche does this almost tediously well. Where some track-ready stuff feels a bit fragile and highly strung, this feels ready for a wet’n’windy triple night stint at Le Mans.

I can only gush like this while I’m alone out on the track, because back in the pits some of my colleagues dissent. Ollie Marriage, who has, to be fair driven the new and old GT4 back-to-back, reckons the Mk1 is that bit more raw, requiring the driver to stop giggling and bloody well know what they’re doing. Rowan’s upset because the engine no longer makes noises like several important bolts weren’t fully torqued at the factory, but it might be the heatstroke talking.

I’ll concede the noise isn’t as fruity, but to stop short of torturing a metaphor, this is still one hell of a cocktail. And I can exclusively report it’s now more novice-friendly. See, being talented at driving is so obvious. Being rubbish and seeing if the car can lower its game to meet your utter incompetence is where it’s at.

There is a problem though. The gearing. Yep, the exact problem we had with the old GT4. A car this zingy and responsive should have your gearlever hand in action like a kayaker trying to escape a whirlpool, but this thing’s set up to top 80mph in second. Porsche, you had one job. One! The only thing we asked you to change about the old GT4 was to stop gearing it for 450mph. Instead, we’ve got more power, more downforce, and exactly the same housefly in the cocktail. 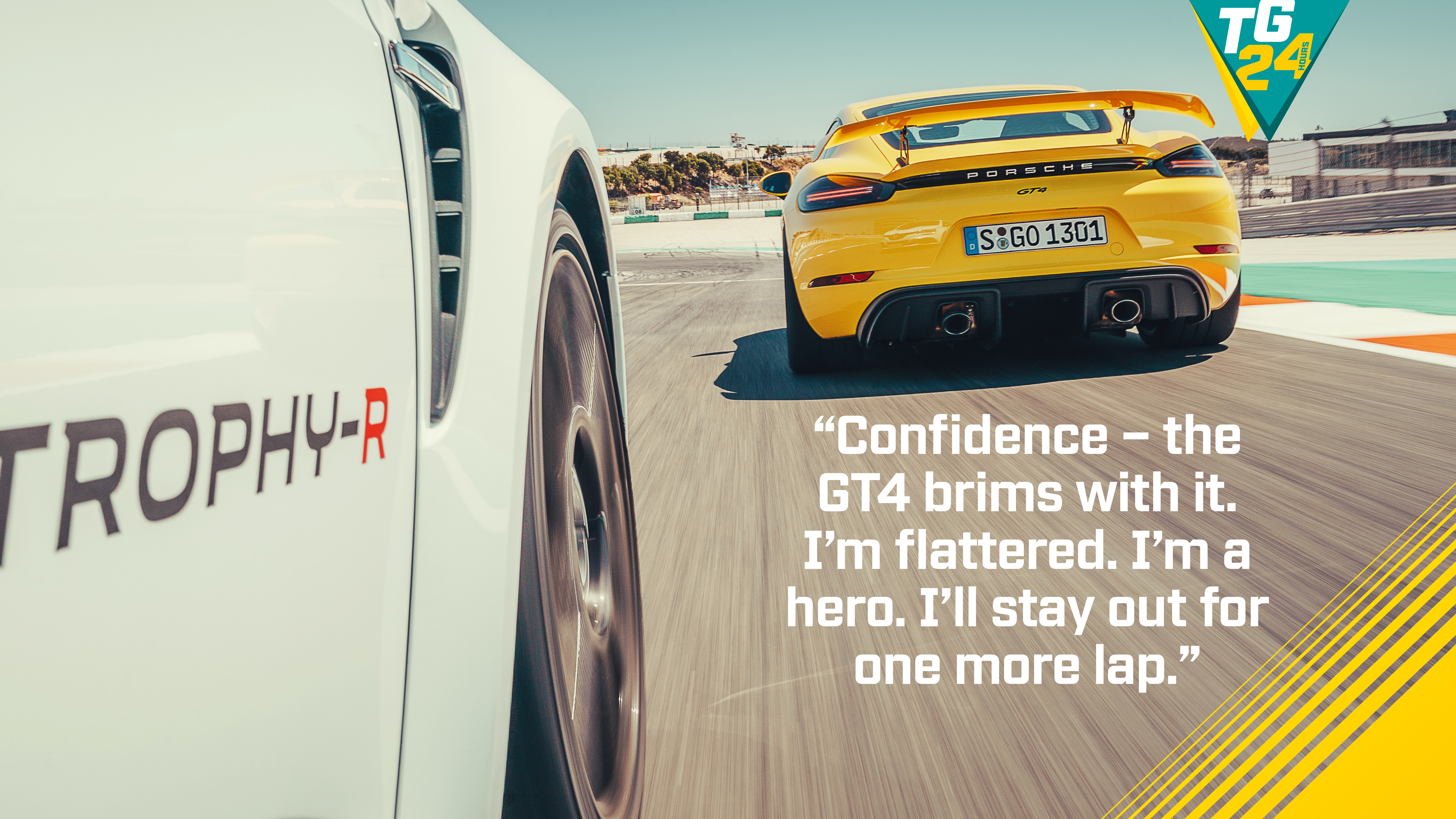 Right, to the Megane. Open a boring French hatchback door, vault a vicious seat bolster, extract uncomfortable six-point harness buckles from within rectum, and breath in an atmosphere of roasting plastic. The Megane doesn’t seat its driver particularly low, the Alcantara wheel doesn’t leap very far out of the ugly dashboard, the instrument graphics look more dated than Minecraft’s and the car’s already beeping because I’ve set off without the three-point seatbelt plugged in, so it reckons I’m unrestrained and in terrible danger. Bing, bing, bing.

Stop, loop the belt around the bucket seat, retrieve harnesses from bum again. And off we go once more.

It doesn’t sound very interesting. Just breathy and raspy, really, like a scuba diver with smoker’s cough. It doesn’t feel shockingly fast, and the gearshift is still stubborn. And then, just as you’re about to decide the Trophy R has ballsed up its chance to make a good first impression, you arrive at a corner.

This car deluges you with information. Immediately you sense the lightness, the stiffness, and then marvel at the exceptional turn-in. Actually, that comes after you’ve had about three stabs at the braking point, because these carbon-ceramic stops are hilariously over-specified for this 1.3-tonne box of fresh air. It practically does an endo when you mash the middle pedal. And through every corner that requires more than a quarter-turn of lock, it’s on three wheels.

It’s a car that bleeds seriousness when you get in, forget about the horrid stickers, bonkers price and the silliness of using a five-door shell to create a two-seater car. Heat-haze dances out of the carbon bonnet. You can see the whole panel flexing and fluttering if you run the inside wheels over the kerbs. The exhaust pings like shrapnel in a gunslinging shootout. You sense the lightness of those wheels through the crystal-clear steering, the limitless reserves of front-end grip and how cleverly the chassis has been set up – to be accurate and trustworthy when you’re learning the circuit, then lively and lairy and light-footed at the rear when you’ve got cocky three laps later. Compared to the old Megane Trophy-R, it’s actually friendlier. But thirty grand friendlier? Hmmm.

Incredibly, the Trophy feels its 100kg mass advantage over the Porsche, despite being less powerful and taller. And Renault, fair play for realising that four-wheel steering was a stupid idea that spoils the normal RS Megane, and binning it here. The car is so, so much better without it. Not to mention 40kg lighter…

This is the conflict of the Megane Trophy-R. You walk towards it with a cocked eyebrow, thinking “there’s literally no way this can be worth seventy-two grand.” Then you drive it, and after you stagger back out to retrieve the fragments of your recently blown mind, you think “Holy heck, that was sensational. Amazing. World-class. But it bloody well should be…”

If the Porsche is hampered by its gearing, the Megane is hobbled by the heat. The limiting factor is its cooling. Dieppe wasn’t able to package a big enough oil-cooler in the engine bay, so after two full-chat laps of Portimao – albeit in near-40 degree Celsius – the warning light’s ablaze and the power’s wound back. Not ideal for a track day machine, that. Not when the Porsche feels tougher than a cockroach smeared in dried Weetabix.

Predictably then, this is the point where despite a surprisingly valiant effort, the Cayman GT4 wins.

And yet, somehow, with my head on the block, this is where the nod goes – just – to the Megane instead. It’s hideously nerdy, unfashionable, uncool and expensive (though not misjudged, as the carbon-wheel’n’braked £72k version has sold out, unlike the more reasonable £50k spec).

But it feels ‘ultimate’. It feels finished, like Renaultsport slaved and sweated until they’d teased every nth of performance out of this car, turning a humdrum hatch into something wonderful.

Whereas the GT4 – well, it’s great, it’s sublime, it’s everything we want a modern car to be and worth every penny, and yet the bizarre gearing still hints it’s been pegged back to make room for a 911. Or, perhaps, a GT4 RS. Watch this space.

Y’know what the crazy thing is? The family hatch is the more extreme machine here. So, for one more lap, I’d choose the Renault. And because it’d be less annoying to live with than a Megane diesel, if I had to drive away in one of these and live in it for a year, the winged, caged, stripped-out Cayman would be the one. How’s that for a moral victory?

Berkeley is back with a brand-new Bandit

Get your Bs in order. The Brit-based builder is back in Biggleswade