Tesla Model S and Merc-AMG E63 vs the stopwatch 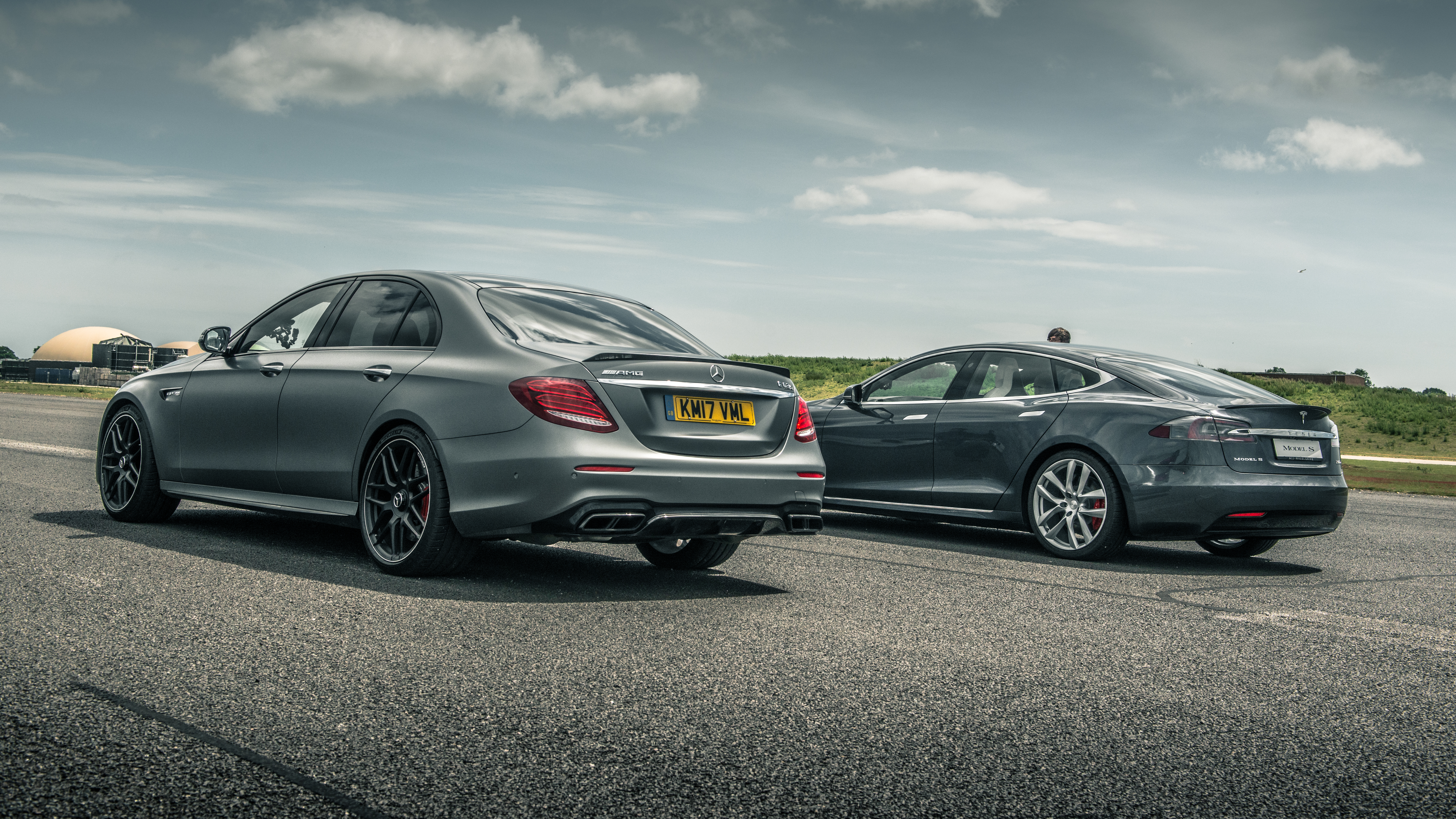 The Mercedes-AMG E63 S is a deeply, deeply fast car. I can’t express that enough. It’s a super saloon with astonishing reactions, phenomenal traction and epic torque from its 4.0-litre twin turbo V8. 604bhp and a vast 626lb ft of torque from 2,500-4,500rpm. That’s colossal, even for a car that weighs almost two tonnes. The figures we got out of it when we first tested it were the fastest we’ve ever had from a saloon – 0-60mph in a gnats under 3.2secs, 100mph in 7.2secs. Even today there aren’t many cars that will keep up. A Porsche 911 Turbo S, Audi R8 V10 Plus and, as we saw recently, the mighty Nissan GT-R are only slightly ahead.

But its rival here would pretty much match or better all of those supercars. The Tesla Model S P100D Ludicrous does a phenomenal job of overcoming its mass (it weighs a quarter of a tonne more than the Merc). Its twin electric motors develop 762bhp and 687lb ft, giving it a power to weight ratio of 339bhp/tonne, against the Merc’s 303bhp/tonne. But there’s more because of course the Tesla doesn’t have a conventional rev band. That power is available everywhere.

Anyway, the end result is that the Tesla – once you get the battery fully charged and pre-heated (Tesla went so far as to send a mobile supercharger along to this test so we could do it with the battery fully topped up), is bloody quick. The acceleration rates are interesting to analyse because the P100D goes through every increment roughly a tenth faster than the E63S. So at 30mph it’s three tenths ahead, at 60 six tenths and so on.

However, it never quite gets a second ahead. At 90mph it’s almost there (5.19secs plays 6.12), but from that point on the Mercedes starts to come back. I mention this in my commentary during the race – looking in the mirror I could tell the Tesla had stretched the gap as far as it would go and the Mercedes was starting to reel it back in. It’s nice to see this sensation reflected in the figures, too. So at all relevant speeds the Tesla is faster – just look at the 30-70mph figure to give you an indication of what it’s like joining a motorway. The Merc makes the leap in 2.68 seconds, but the Tesla is almost exactly half a second faster.

No, it didn’t go as fast as the figures say it should (2.5 to 60mph), which I found a bit frustrating, but then we were on a windy, old airfield rather than a high grip drag strip and we don’t use the one foot rollout allowance that the Americans favour. That’s cheating as far as I’m concerned, because the car’s already moving when the measurement starts. Just wanted to get that off my chest.

And yes, the Tesla’s launch control did play up. With amusing results for everyone watching as my head snapped back. That was less impressive. Gave me neck ache the following day, too – which goes to show just how hard these things go off the line, I guess.