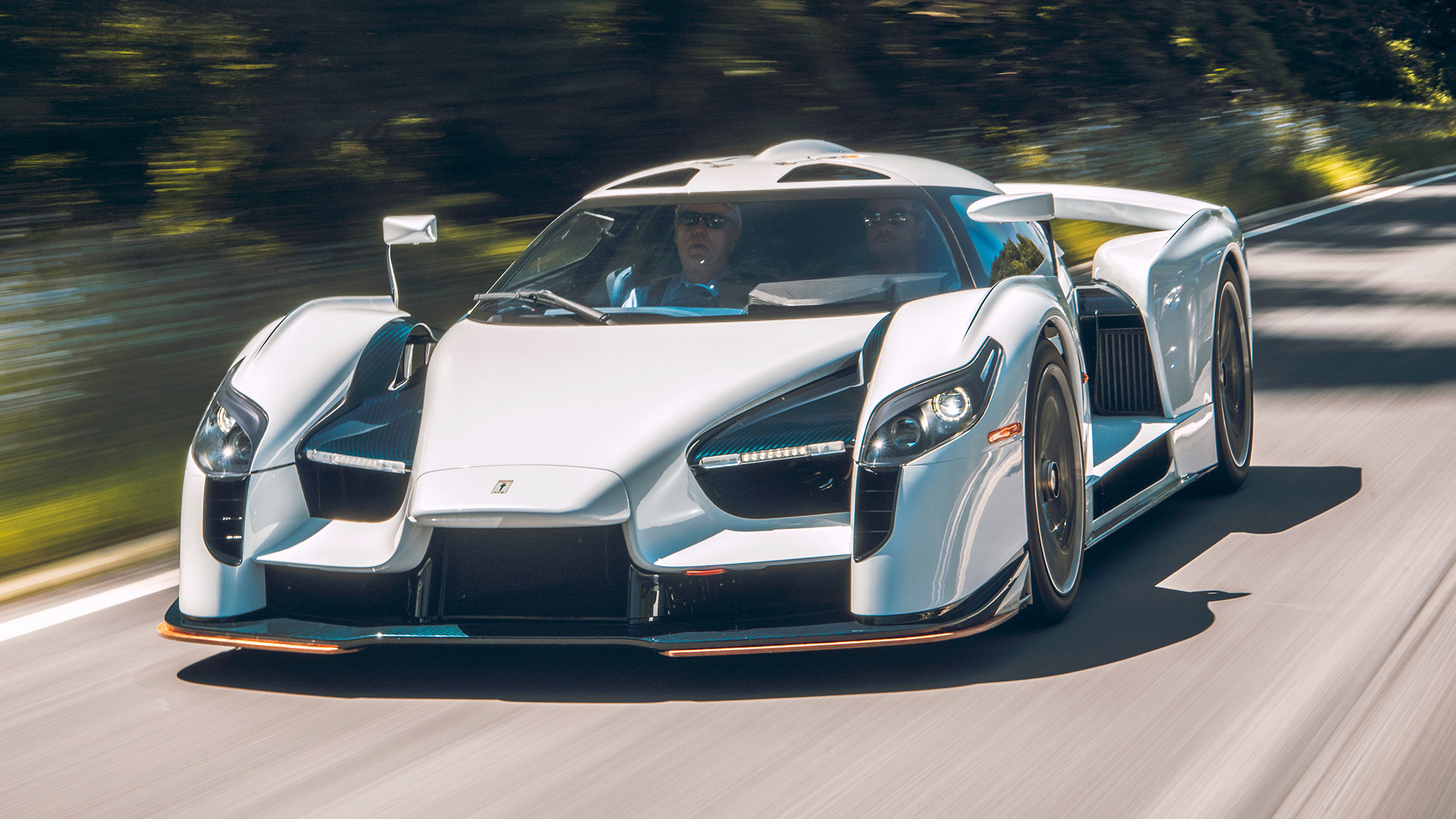 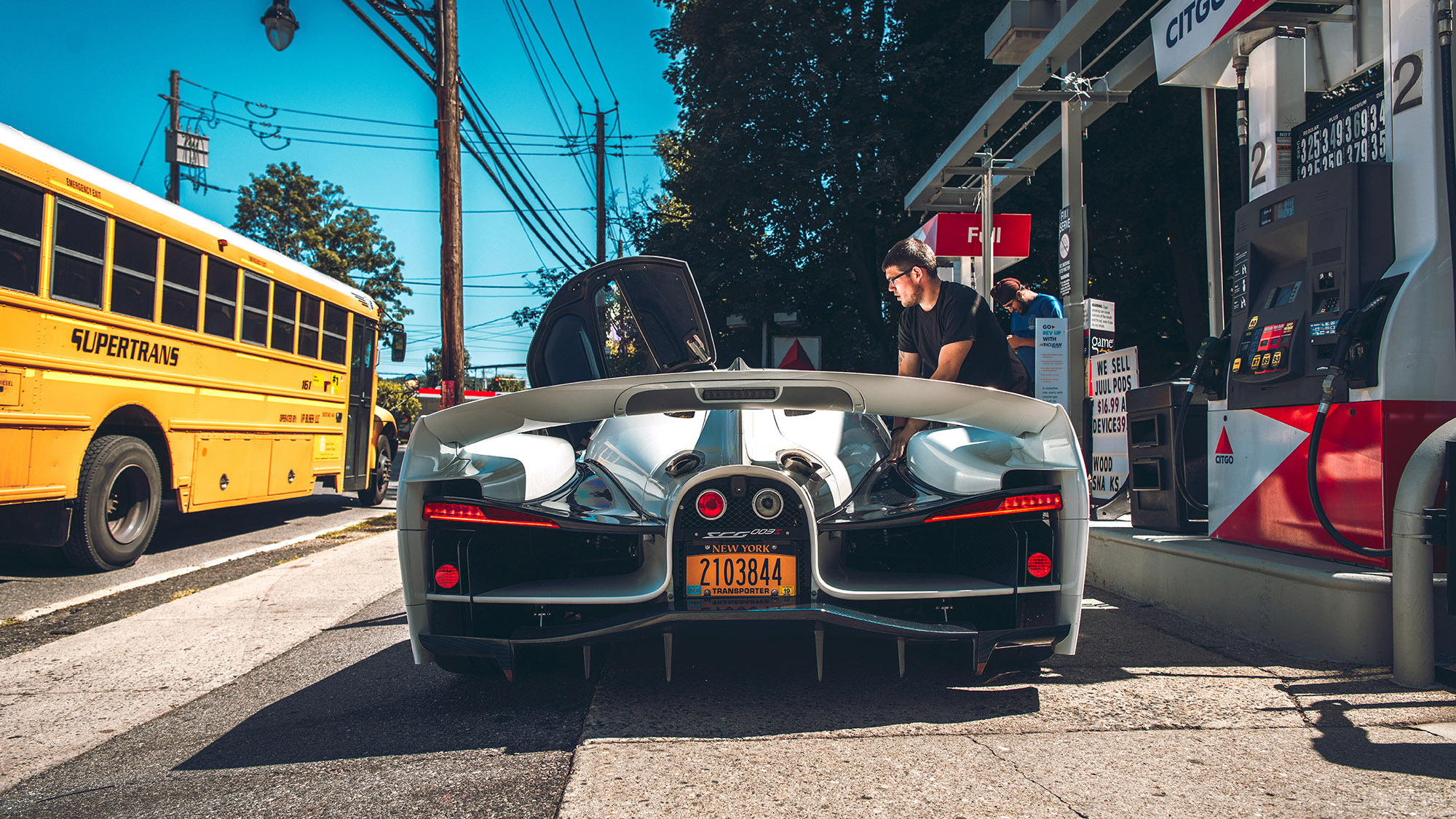 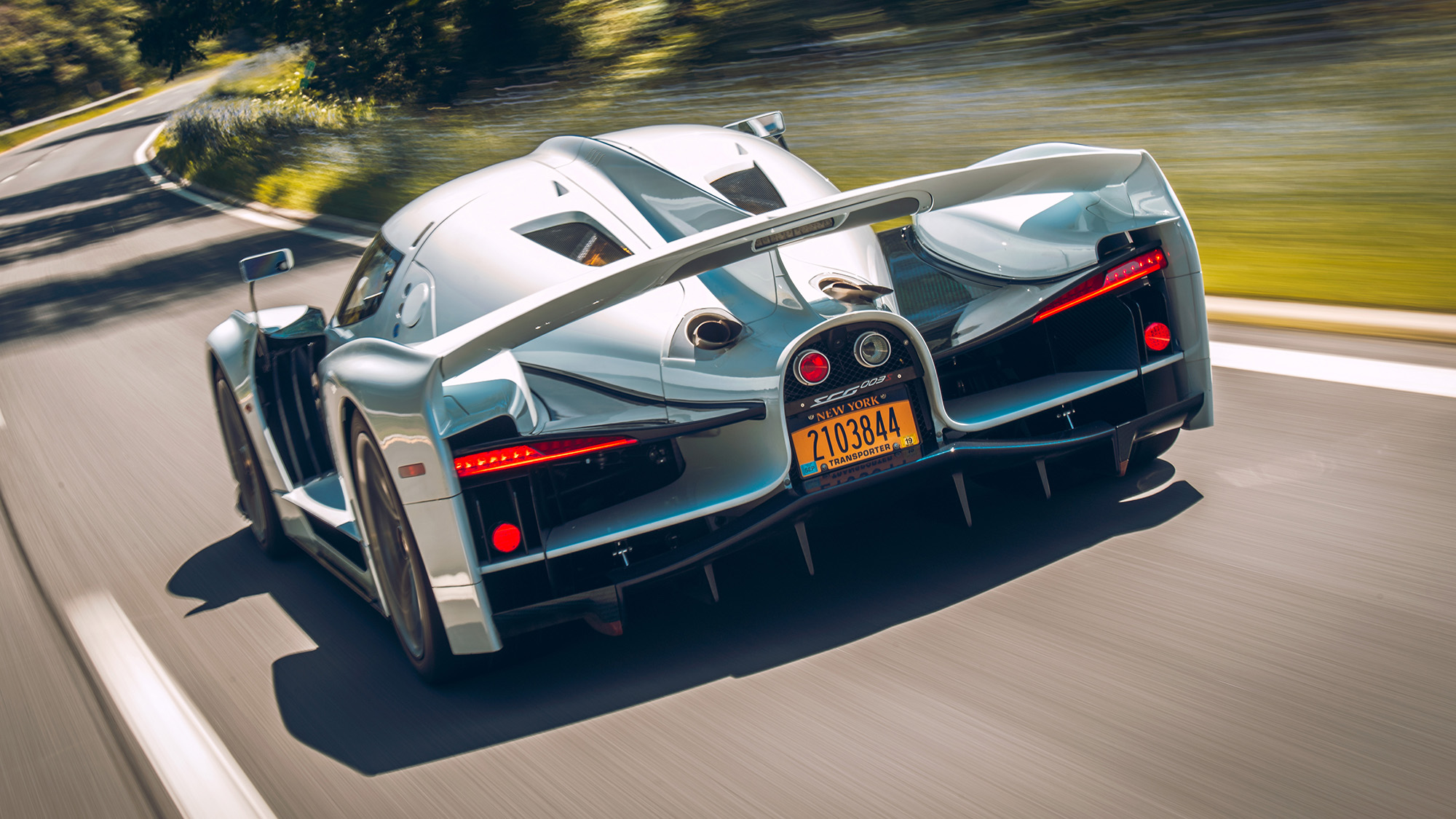 The SCG003S. It’s a new road-legal American hypercar that bears the DNA of a Nürburgring 24-hour endurance racer; a car that wants to play in the battlefield of the limited-run hypercar ateliers like Koenigsegg and Pagani, but demolish the established big boys of McLaren and Ferrari via bludgeoning circuit-crushing performance.

Jim Glickenhaus. The son of one of Wall Street’s hardest-working warriors and a man who has made a load of wedge in films – money he’s subsequently poured into his passion for motoring.

Just how passionate are we talking?

A quick run through his garage, if you permit. The Ford GT40 Mk IV that finished fourth at Le Mans in 1967 (driven by Mark Donohue and some bloke called Bruce McLaren). A stunning one-off, bright yellow duckbilled 1967 Ferrari 206 Dino Competizione (a car long owned by Pininfarina but sold to him at their invitation a few years ago). An ex-Mark Donohue/Roger Penske Can-Am-winning Lola T70 with 65,000 road miles on it.

If that wasn’t enough, there’s the breathtakingly gorgeous Ferrari P3/4 and 412P. And – Jim’s latest acquisition – the Ferrari Modulo.

Better than that, every single one of them is road-registered. And driven hard. If there’s a man who knows about race cars for the road, it’s Jim. He’s been doing it for years. Now he wants to do it for himself, his own way.

Correct. Jim was the mastermind behind 2006’s P4/5 (also by Pininfarina) – an epic one-off reimagining of the Ferrari Enzo – and its racing sibling, the P4/5 Competizione. The Competizione raced at the 2011 Nürburgring 24 hour race, and after a bit of evolution, returned in 2012 to finish 12th.

The SCG003C was its successor – a ground-up racer using all the development knowledge from Jim’s previous years competing at the ‘Ring. It worked, too: in 2015 it qualified on pole position and finished first in its class.

Also correct. It’s predatory, and – if I’m being honest – a bit intimidating. The design team consists of former Pininfarina designer Lowie Vermeersch (he - and a team including Jason Castriota - did the awesome Maserati Birdcage 75th anniversary concept) and Goran Popovic (the man who squiggled the timelessly elegant 360 Modena).

Agreed, the name could do with a bit of a polish, but the rest of it is more than worthy of your attention, for all the usual reasons and some less familiar ones.

This SCG003S (where the ‘S’ stands for Stradale) shares a remarkable amount of DNA with its competition sibling. There’s a carbon fibre monocoque chassis with carbon uprights and LMP2 levels of aerodynamic downforce.

The engine comes via BMW: the company’s 4.4-litre twin-turbo V8 from the M6 racer, producing 750bhp+ and over 590lb ft of torque. Drive is sent to the rear wheels via a seven-speed single clutch gearbox (dual-clutch was too heavy), there are double wishbone pushrods all round with adjustable Bilstein damping, Brembo brakes, and speed.

Yup. Its racing DNA means there are some incredibly innovative solutions to better performance.

So, while racing, the arches must completely cover the wheels and suspension, but only in plan (top-down) view. This allowed Jim to have the wheel wells wide open to force air up the car’s sinuses and around the cockpit to that huge rear wing.

See that spine in the roof? It's there to meet minimum cockpit height requirements while keeping the roofline as low as possible. Same story for the ones on the arches. Amazingly, this is legal within the homologation under SCG’s NHTSA status for low volume manufacturers (which exempts it from things such as airbags and crash testing as long as they don’t produce 325 cars a year).

Similar to LaFerrari. It has a cockpit that’s been pinched in for aerodynamic benefit, yet still remains a lot roomier than a Lotus Elise. Straddling the wide sill, you slither your legs down under a heavily-buttoned carbon fibre bow-tie-shaped wheel. Save for the more open, touring style seats, the interior layout is the same as the N24 race car.

All the important stuff is controlled off the wheel, while everything else is labelled in hi-vis to be as ergonomic as possible. It’s not pretty but it doesn’t half add to the occasion. The carbon butterfly doors are heavy and the mirrors are only there to better aerodynamics (there’s a full camera system instead, just like a race car, that display your surroundings either side of the parallax digital dash).

There are also three dials on the side laid out like the positioning LEDs on the side of an LMP1 car, useful for fuel and oil and so forth. The skid-plates are made out of the same resin-infused, wood-based composite used in F1, and even portholes in the roof which add airiness to the cabin, but, more usefully, so you can peer up and see traffic lights.

Luggage space? Aside from a carbon fibre bag and under leg saddle bag, forget it.

We drove a development car with 10,000 race miles on it. Things like the ABS, gearbox and traction control still need further calibration, but the most amazing thing is that the 003S does not drive like a race car. It actually just feels like a road car. Which, given what it looks like, takes your mind a while to adjust to.

The ‘S’ flows down a road incredibly amenably. It doesn’t stutter or noisily galumph like an N24 racer. It’s soft and manageable. Admittedly, there’s 400kgs worth of sound deadening and softness added to make it more compliant compared to its racing sibling.

With rubber mountings where things are normally rose-jointed it’s not jarring, and the three-way Bilstein dampers are amazing at ironing out New York’s broken parkways. There’s even proper air conditioning and you can have a conversation at speed a lot easier than in a McLaren Senna.

Throwing it down a road, the car has a fluidity to it. It isn’t frenetic or deflected by whatever road environment throws at it, which is comforting. However, bury your right foot in the long-travel pedal and the engine gains a whole new character.

There are three driving modes, and lower in the rev range the car just floats on the torque, but if you commit it wakes up and comes in with a wave of fury. It becomes loud, visceral and things start getting blurry very quickly. It’s addictive. Yet that BMW engine feels more effective as opposed to characterful. With those turbos nestled in the V8 it’s responsive and has loads of torque with a linear delivery, but runs up to the rev line quicker than you’d expect, so you need to be quick with the paddles or you’re bouncing off the limiter.

Only having driven it on the road, we can’t comment on the monster potential of 850kg of downforce, but the mechanical grip from the Cup 2 tyres is impressive. There is a nudge of understeer, but that’s an inherent safety net.

On the road, the carbon ceramic brakes have top-end squidge and lack initial bite (the car had done a big track day before, so they might’ve been glazed) but are powerful and the hydraulic non-assisted rack offers plenty of feedback. It is heavy at slow speed, so a nightmare for manoeuvrability around town.

We’re yet to drive it on track (something we’re planning on doing later this year) but the SCG003S oozes performance and you can smell the hard work and engineering that’s gone into it. The fact its development has come out of the most gruelling race in the world proves it’s no joke, and you can check the race lap times to show it’s properly capable.

Yes, at £1.7 million it’s expensive, but you’ve now got people like Pagani charging £15m for a 20-year old chassis (the Zonda Barchetta), so with Jim playing in those battlefields, it looks like a bargain. Plus, with only two or three being made a year, you’ll have one of the rarest and capable road cars you can track in the world.