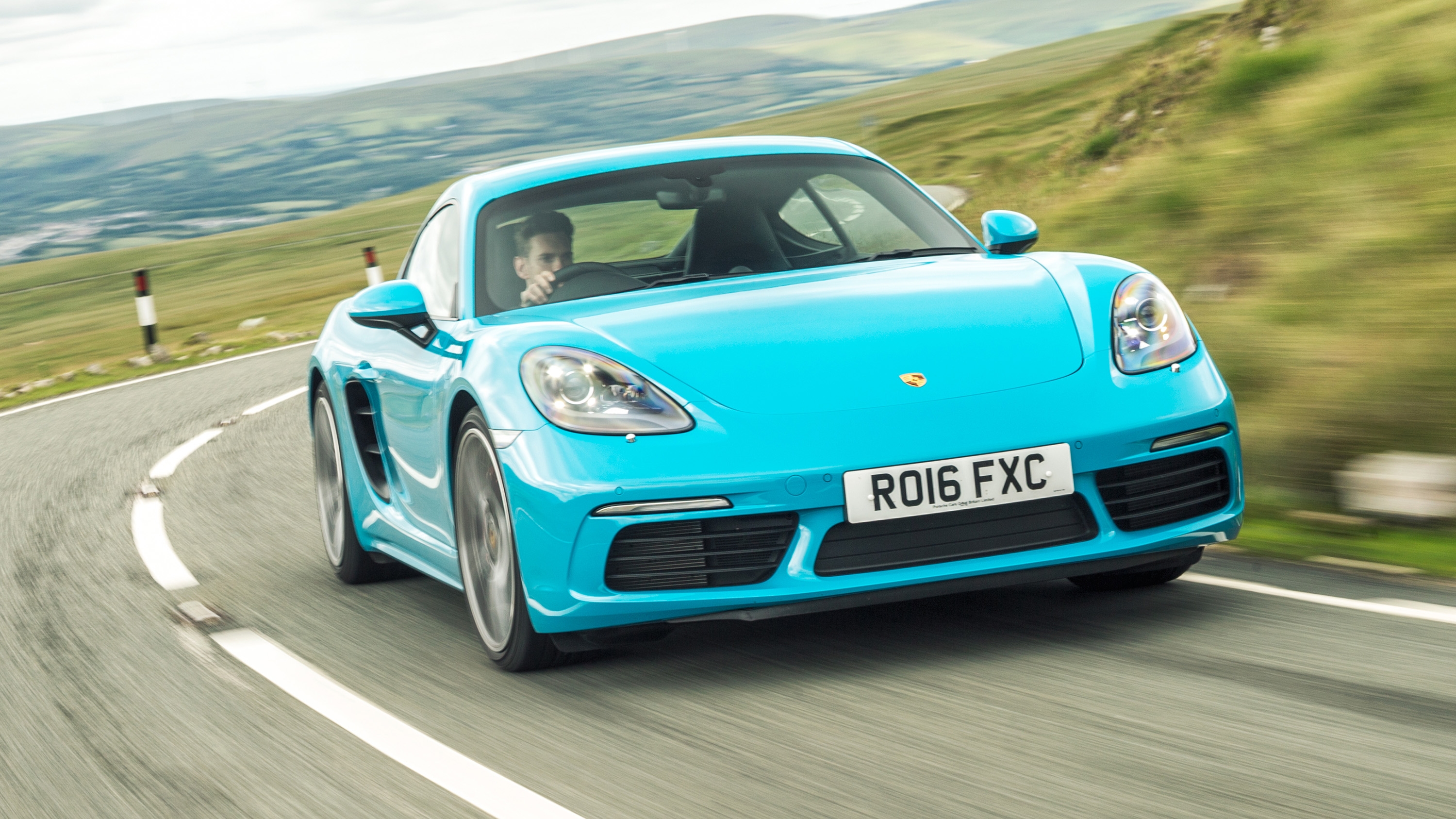 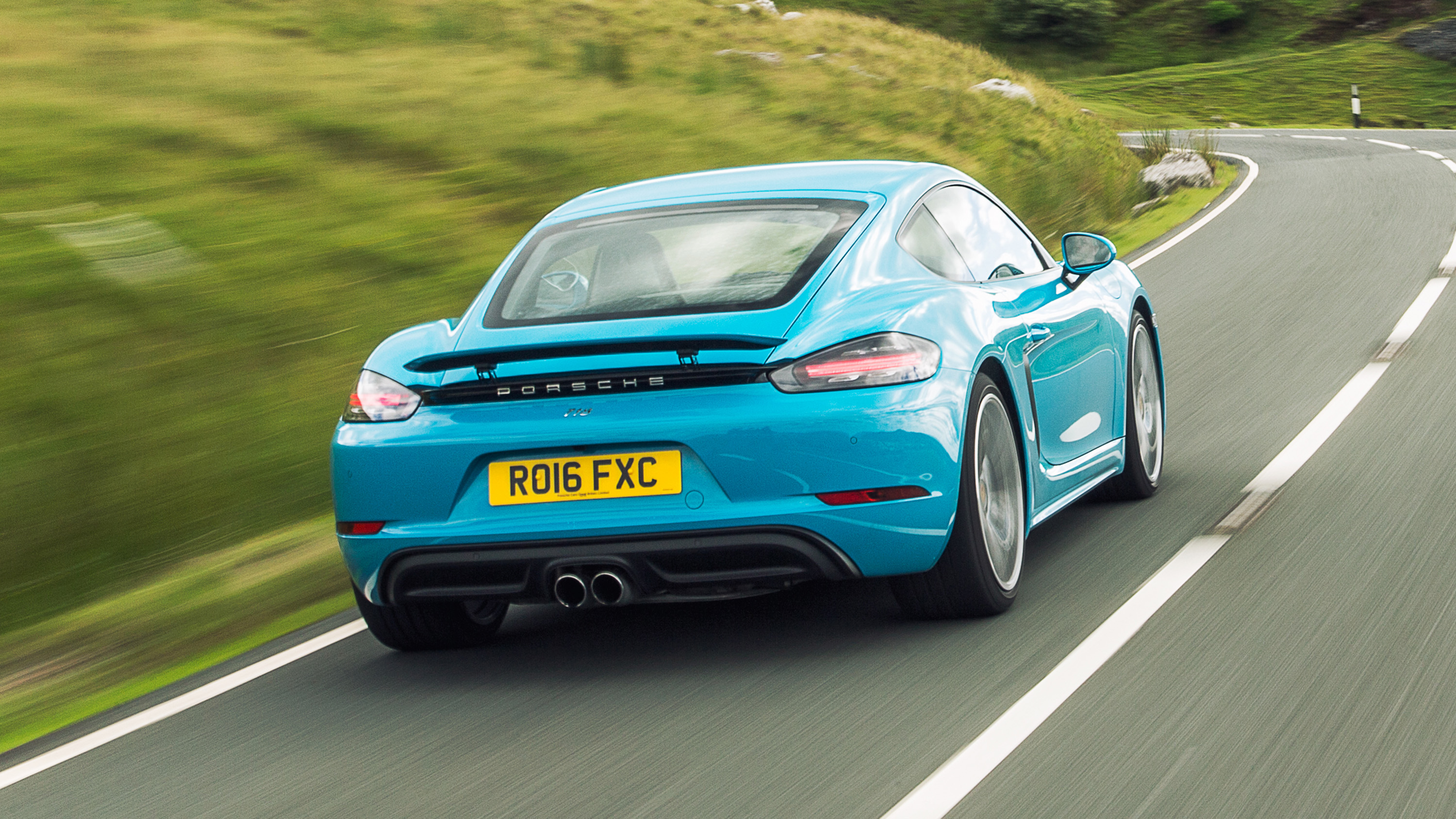 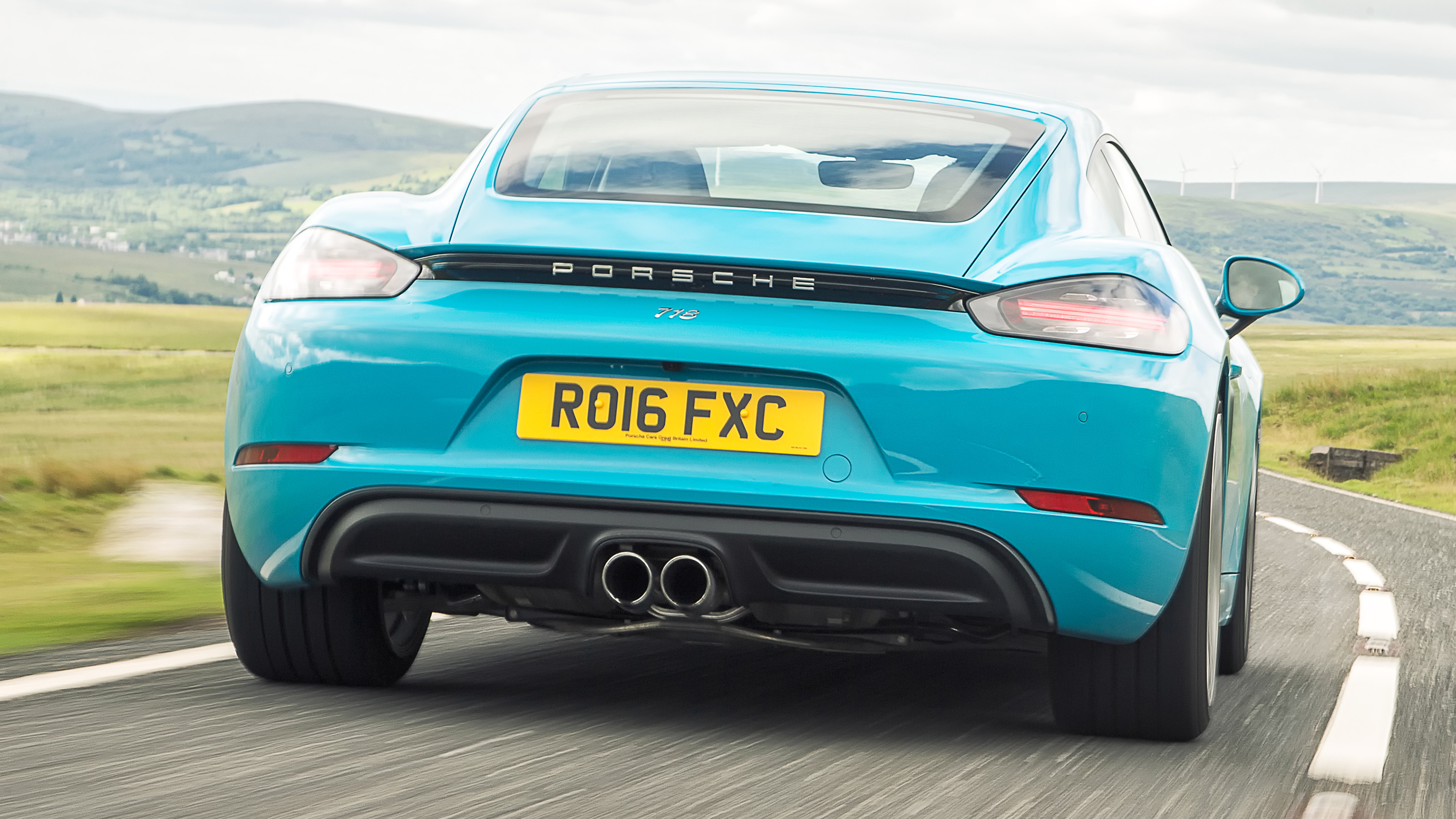 So the four-cylinder Porsche Cayman…

Right, I’m just going to give you the facts on the Porsche 718 Cayman to start with, and move on to opinion further down.

What about other changes?

The springs are stiffer, the dampers have been revised, the electro-mechanical steering is 10 per cent more direct, the rear wheels are half an inch wider and the brakes have been upgraded. The standard Cayman now has the old S’s set-up, and the S gets the same stoppers as the 911 Carrera – same 330/299mm rotor diameters front and rear, but 6mm thicker. Ceramics are an option of course.

Opt for Sport Chrono and you get the mode dial on the steering wheel, and on the S, the PASM suspension option lowers the ride height by 20mm, instead of 10mm.

I’m slightly mystified by the 334-litre load capacity (split 150 front, 184 rear) when the old car quoted a max of 425 litres, but I suspect that’s down to how they’re measured rather than anything more sinister – the old one included the area on top of the engine behind the driver’s head, but I doubt the new one does.

Enough about load space, how is it to drive?

OK, I’ll skate over the interior updates, since those are mostly confined to a new flush-fitting infotainment screen, but it is worth knowing that the Cayman is hard to fault inside. The driving position is low and snug, and the controls are just where you want them and operate with an easy, fluent precision.

It’s easy to see out of, easy to place on the road, it’s compact, well packaged and – provided you get busy with the options – well equipped.  Otherwise, not so much.

Pricing hasn’t increased at all – the standard Cayman is a whisker under £40,000 and the S is £48,834. This car weighed in at £62,068, with a heap of stuff you’d hope would be standard (parking sensors, torque vectoring diff, sports exhaust, sports seats, sat nav – those five options alone adding £4,860). That’s a lot for a car with a four-cylinder turbo motor.

And how is the four-cylinder turbo?

Disappointing. I doubt this will come as any surprise, although nor will the fact that the other dynamic attributes are as polished and brilliant as you’d expect. But I still don’t like having to report that this engine does fundamentally cheapen the Porsche experience. And cheapen is the right word – the Cayman feels less upmarket, less cultured and sophisticated than it did before.

OK, let’s be charitable for moment. It’s more charismatic than most other four-cylinder turbos – the boxer layout does give it an interesting budda-budda-budda engine note, and yes, that is reminiscent of an old camper van. It makes a fair bit of noise, especially with the sport pipe engaged, and for a turbo it picks up well (there’s a real jump at 2,400rpm when the turbo hits). Lag is minimal and acceleration forceful. I don’t doubt it’s faster than the old car.

But the constant feeling you get is that Porsche has almost over-egged the pudding in its quest to make you forget that the Cayman used to have a gorgeous, sonorous, responsive, rasping, wailing, rich, tuneful flat six. It’s like a caricature of a four cylinder, this – almost too noisy, too shouty. And because it behaves like this you’re always reminded that it also sounds, well, cheap.

I also suspect the standard Cayman with its monoscroll turbo might do a better job of letting the motor’s natural character come through – this one, with its variable turbine geometry, pulls in a linear line from 2,400rpm to the 7,500rpm cut-out. It doesn’t even seem to be working hard, it just piles on the speed.

But aside from the engine the rest of the Cayman experience is fully intact?

Yes, but that’s not the whole story. A car’s engine is not just another component. It might be in a city car or an MPV, but not a sports car.

A good engine can make a car, casting favourable light on other, less worthy, components. Take the Honda S2000 – its mega engine made you forget the steering wasn’t much cop. It works the other way too: a lacklustre engine takes the shine off other components.

So when you drive the new Cayman, because the engine isn’t as sharp and zingy, the steering doesn’t feel as bright, the chassis doesn’t seem to have the same appetite for corners as it did before, the brakes come across as less feelsome. It feels just a little more ordinary to drive.

Instead of the car coming to you, urging you on, you now have to go in search of your kicks a bit harder, which means you’re travelling faster but not having such a good time. Not ideal.

But do this, really concentrate on each element, and the Cayman does come to life. You realise the brakes are astonishing, that the chassis is fully loaded with talent and ability. It’s a delight around corners, really adjustable and composed.

I’m still not fully convinced of the steering – the system is borrowed from the 911 Turbo (why that and not the standard 911 I don’t know), but I’m not 100 per cent convinced it gives you all the communication you want.

It rides really well though. It might be stiffer, but even on optional 20-inch wheels wearing broad 235/30  and 265/35 ZR20 Pirelli P Zeros, it rounds the edges off sharp bumps very well indeed. And the gearchange is lovely. Provided you have the manual of course. Go PDK and you’re simply giving yourself another opportunity not to be involved.

So the turbo Cayman feels blunter than the old one?

I suspect all the metrics suggest otherwise, but do you listen to them or do you listen to what your heart, hands and butt tell you? It drives very well this new Cayman, I can’t think of a rival that comes close, but it’s not enough to fully make up for the deficiencies of the engine.

OK, putting that aside, we know it’s faster now, is it more economical, too?

It might be cheaper to tax, but it’s not any more economical. Hard driving had it down at 17.7mpg, resetting the trip computer for a long, steady cruise had it up at 28.9mpg. I don’t think this is any better than we’d have got out of a six cylinder. We found exactly the same when the 911 went turbocharged too – the gains are all on paper.

And while we’re on the subject of economy, please Porsche will you stop saddling your cars with such long gearing? It may drop you a few g/km of CO2, but I don’t need a sports car that’s geared to top 70mph in second and 110mph in third.

Look, it’s a better car than I give it credit for and taken in isolation – and if you weren’t aware of what had gone before – you’d be delighted. The more I drove this one, the more I got used to it, but then I’d think back to driving the naturally aspirated one and, well, that’s the one I still want. I no longer yearn to own a Cayman – that, when all’s said and done, is the difference.