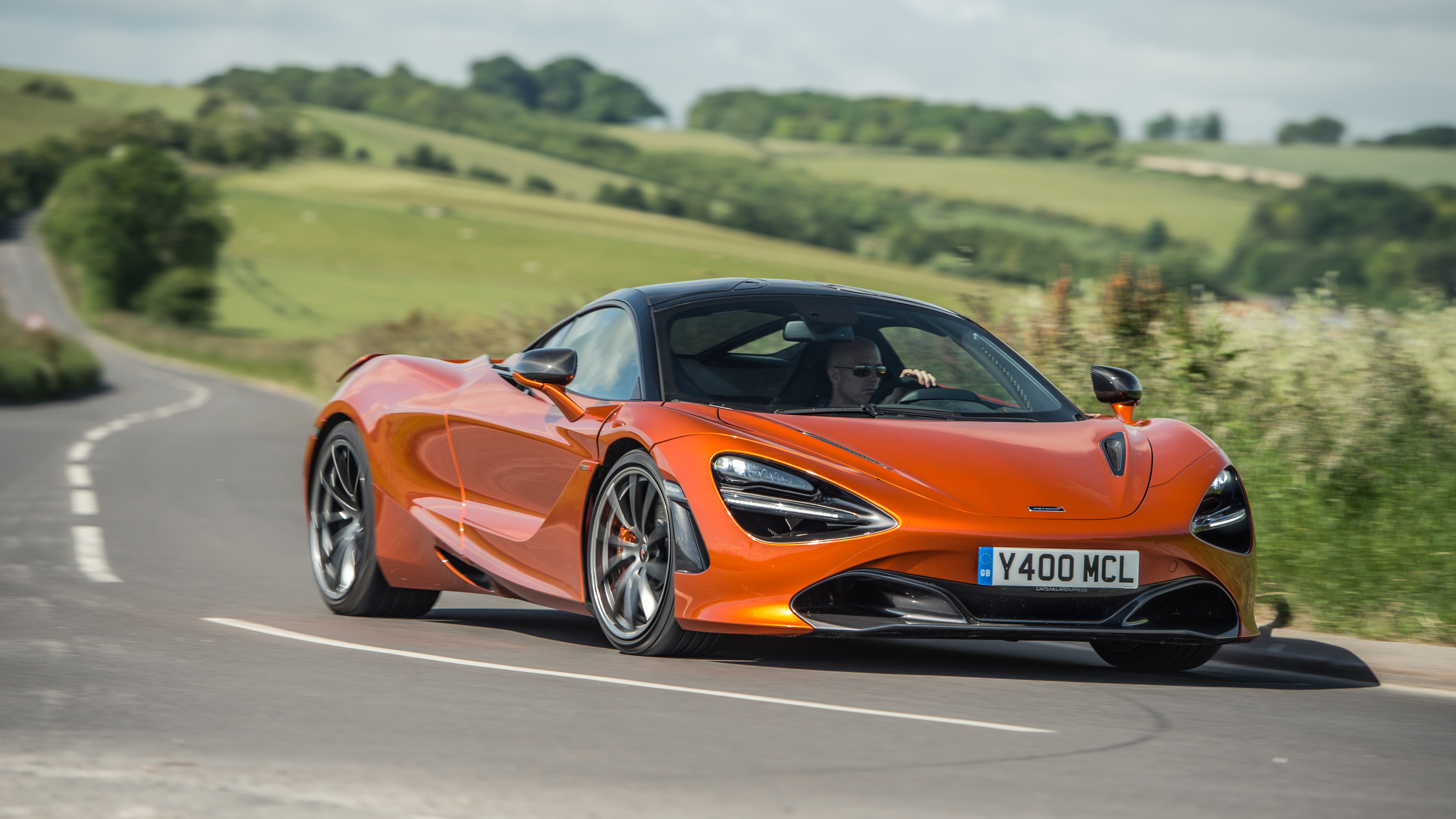 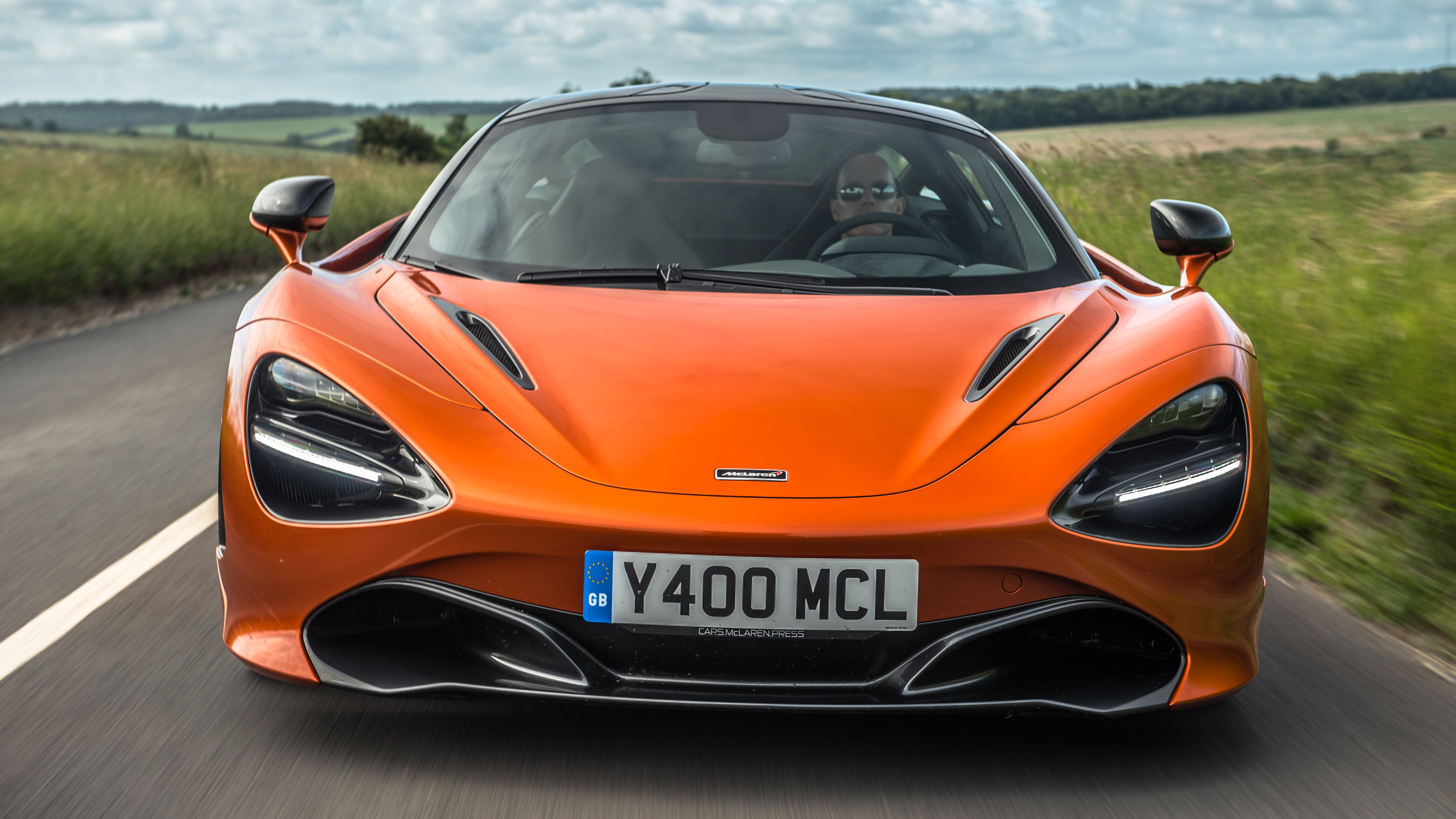 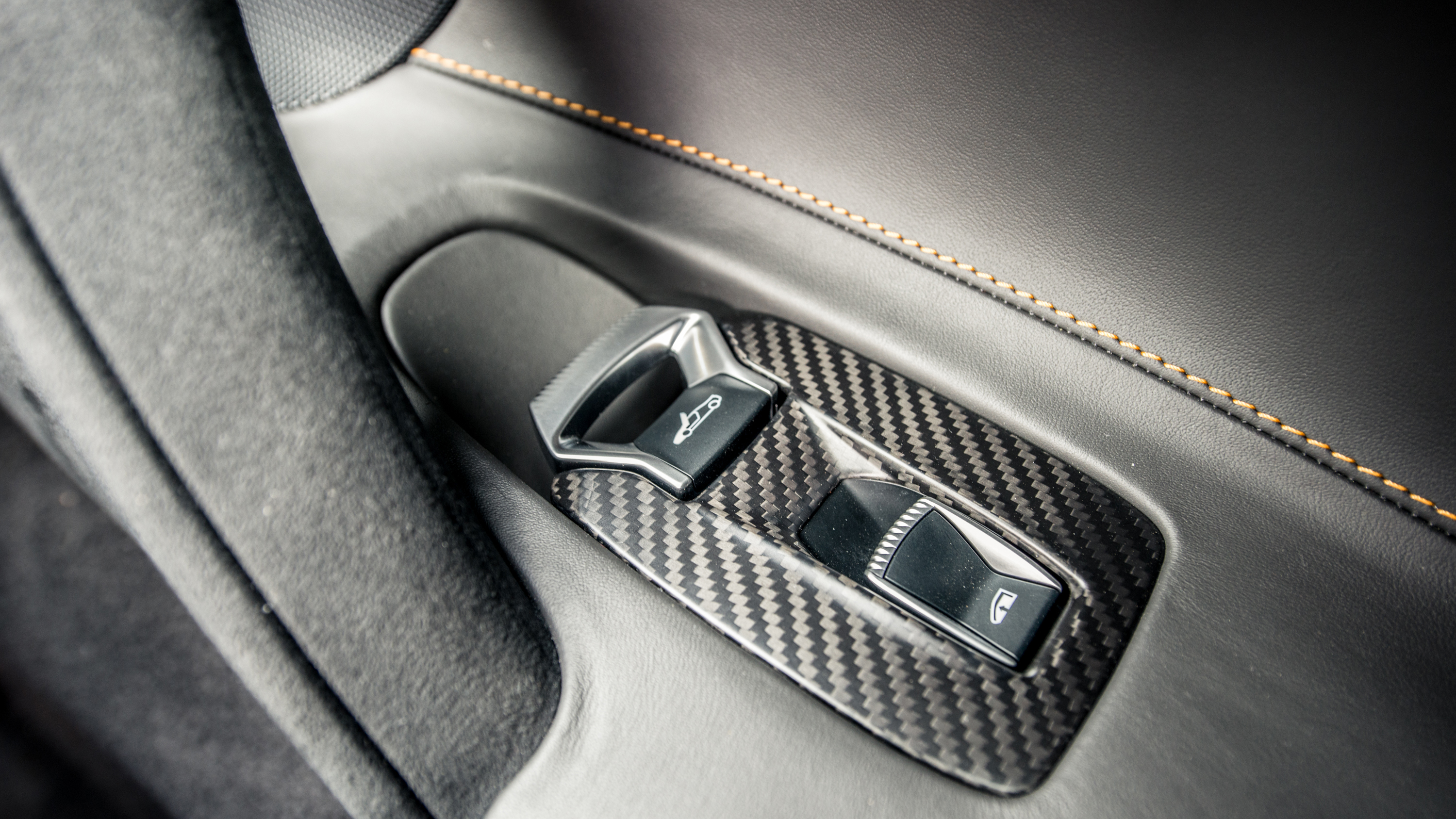 You know all that and more already from our first drive of the car in Italy. But now we’ve got it in the UK: home territory, the chance to find out how it really behaves on B-roads, how easily it copes with city traffic, if it can handle daily life without being a complete pain in the arse.

What’s the answer then?

Steady on, one step at a time. So, these pictures all show it in the countryside because that’s the best place to do pictures, but we had the car for the best part of a week and it spent a lot of that slogging in and out of London and schlepping along motorways.

City driving first. I don’t think there’s another supercar manufacturer that understands that people might want to drive their car every day anything like as well as McLaren. From the moment you get in you’re aware of an ergonomic friendliness, the 720S basically gives you a warm, welcoming handshake.

I’d rather just grip the steering wheel if it’s all the same with you...

Stop being facetious. So here’s what sets the 720S apart. The front scuttle is low so you can see forwards and downwards easily, look back over your shoulder and marvel at the amount of glass. It’s above your head, too. Not only does this let a lot of light in, but you can see out.

This car was left hand drive and I barely noticed. Getting out of awkward junctions is a doddle when you can look back over your shoulder and see everything. The turning circle is reasonable and it gets itself over speedbumps without having to employ the nose lift. That’s because the front overhang is short and the splitter doesn’t scrape the tarmac.

There’s more. I’m a lucky sod and my daily driver at the moment is an Aston Martin DB11. At every roundabout I have to crane my head around the chunky blind spot created by the overlapping A-pillar and wing mirror. Here they’re well separated so don’t get in the way.

But managing 710bhp in town must be tricky?

Here’s the real genius – the calibration of the engine and gearbox is sublime. Absolutely sublime. The 720S moves calmly around. It never lurches or snaps forward, but instead your throttle inputs are exactly translated into easy movements. The gearbox oozes through the lower ratios. There really is no sense that you’re battling against an unwilling partner, something truculent and disruptive. The Audi R8 I ran last year was notably trickier to see out of and had a laggier throttle.

You have to put so little effort in to make the car operate well. Of course you’re sat at axle height to a bus and feel on display thanks to all that glass (the heat generated in the cabin if you leave it parked in the sun is remarkable, so shout out for the powerful climate control), but the only real drawback I noticed was the carbon ceramic brakes needed too much pressure before binding.

But they were better once you were out of town, right?

They were. In fact they were awesomely powerful and reassuring, but I do like a bit more top end bite. Not to Audi levels, you understand, but Porsche gets this spot on. That said, it’s worth pointing out that this car was fresh from the international launch where it had been heavily used on track...

You didn’t take it on track, though?

Only to extract some performance/acceleration times out of it. They were so alarming I’m going to put them in a separate story. Keep an eye out for that.

Just to return to town manners briefly, I wanted to add that it even has a good turning circle and doesn’t feel too wide – although this is principally because the passenger cockpit is relatively narrow (but not claustrophobic) so you tend to forget there’s a fair amount of width beyond the side windows.

It’s worth mentioning the 720S measures 4,543mm long and 1,930mm wide. That’s only 5cm longer than a Porsche 911 (albeit over 10cm wider), and both a little shorter and narrower than a Ferrari 488. I’ll mention the latter again later. Motorway manners next...

Kind of. But not without faults. The ride comfort is excellent – the 720S is taut but beautifully damped so it moves in sync with the road surface and never jars. However, there is tyre noise. It’s exacerbated because it’s reflected and bounced around the cabin by all the glass. Is this an issue? Well yes for one main reason – the stereo’s sound quality isn’t quite good enough to overcome the background buzz.

There’s also the question of the seats. This car was fitted with the £5,120 Carbon Fibre Racing Seat – Regular. I’m assuming this means they do them in wider fittings. I hope so. Larger members of the team found they could barely wedge themselves in. They’re deep, fixed back and aggressive, and lock you in position so rigidly it’s difficult to even wriggle on a long journey.

Personally I really like them because they cup and hold you so well, but be warned that although you’ll slide down into them easily enough, the extraction process tends to be more laboured. And this despite the doors encroaching into the roofline.

The doors are very cool and spring up easily but they’re heavy to pull down – it’s just as well there’s an electric motor to latch them properly. And it just about managed 25mpg on a long haul, but overall it was more like 19mpg. But that’s what the R8 did and it had over 100bhp less to play with. 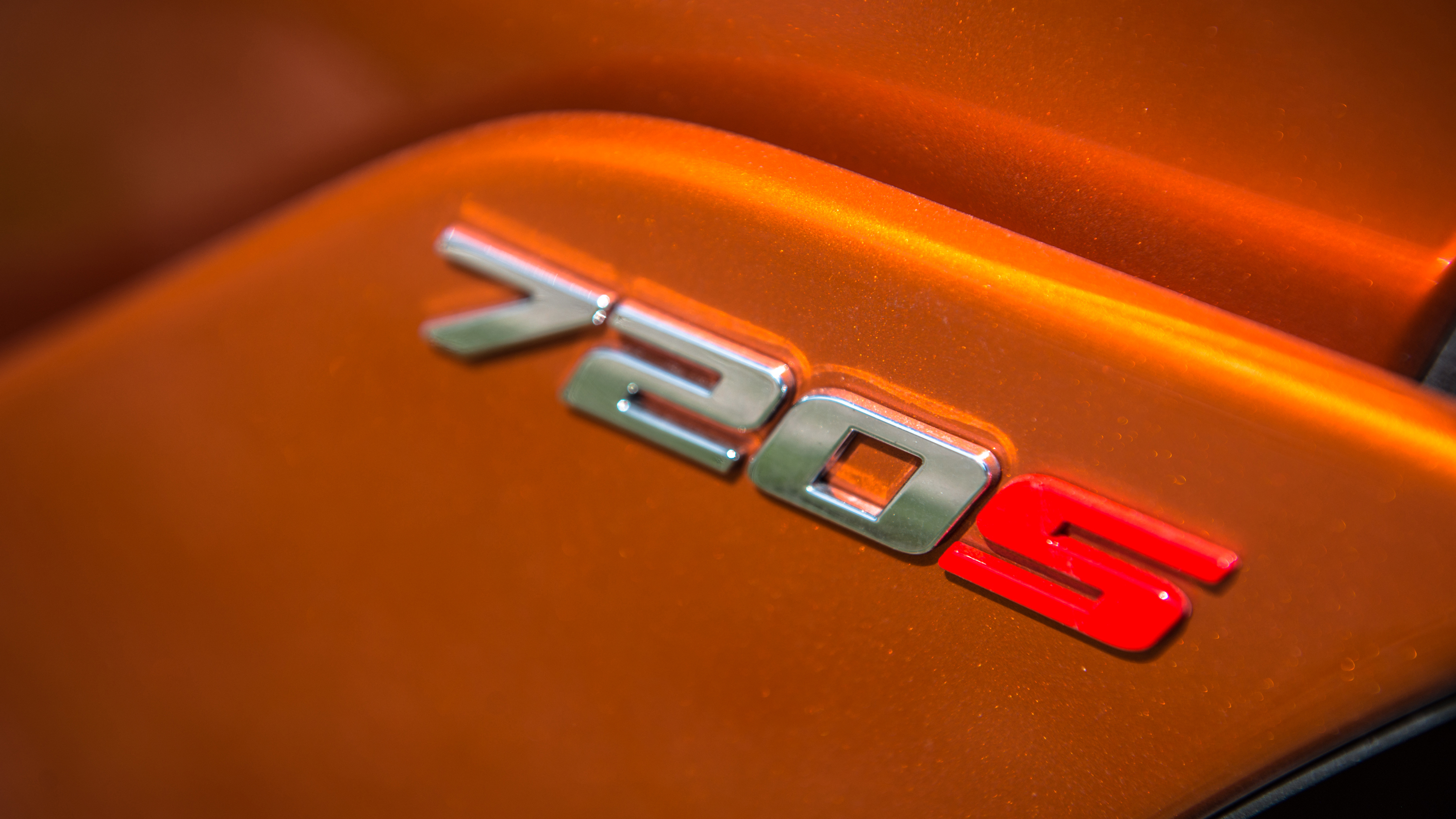 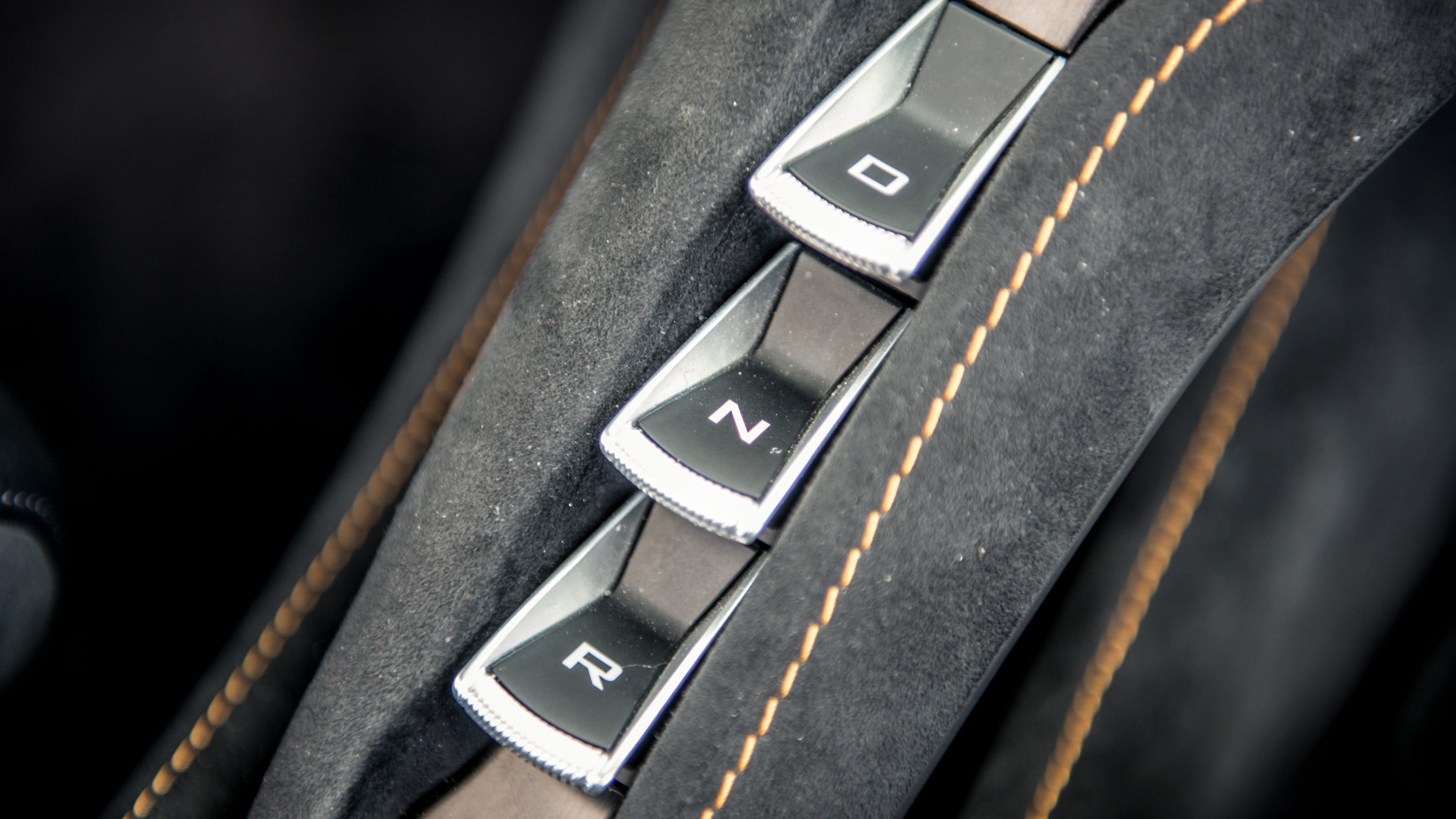 Anything else strike you about the practicality?

The front boot is a generous 150 litres (as you’ll be able to see in a forthcoming film we made, a five man tent slotted in a treat), the back deck is 210 litres and that, on separate occasions, held both a set of golf clubs and a mountain bike wheel (the rest of the bike was suckered on the roof…). So it’ll cope with luggage for a weekend away without much effort at all. You might lose some rear visibility and since the rear glass doesn’t open things have to be posted in, but that’s it.

There’s no stowage in the doors for obvious reasons, so McLaren has tried hard to liberate as much as it can on the centre console. As long as your wallet is slim, your phone not a Plus and you drink compact coffees, you’ll be fine. Think like a McLaren engineer: it’s all about stripping stuff out.

It doesn’t weigh much, does it?

It doesn’t – just 1,283kg dry, and McLaren say that with all the fluids and 90 per cent fuel it’s still only 1419kg. That’s commendably light and gives the 720S a power to weight ratio of exactly 500bhp/tonne. The same as a Bugatti Veyron.

Before I harp on about what this means for performance and driving, what most impresses me about this is that the weight target has been hit despite McLaren clearly having taken the 720S down a more luxurious path. The 720S isn’t brutally pared back, in fact it’s the first McLaren that has a sense of theatricality and artistry. Consider the flippable dash display, the brightwork on the buttons, the electric motors that clamp the doors closed. There’s more varnish here than we’ve seen on any other McLaren and I really like that. It’s a less clinical car as a result, wants to dazzle with more than just its speed. This is a lighter hearted, more exuberant McLaren than we’ve seen before.

It is, it really is. It helps to alter your expectations of the car, so you’re not just looking for your next fix of speed, but are happier to just relax and cast your eyes around the cabin.

Those are the numbers. The Italian car is the more visceral experience – its engine is snappier, its steering is faster, its noise is more invasive. I haven’t driven them back to back, but I believe it’s a more occupying, rawly exciting car to drive.

With the McLaren it’s the purity that strikes you – how smoothly and accurately the steering operates, how terrific the body control is, how effectively the suspension works. It’s witchcraft on the move. But it’s a car you have to go in pursuit of, one that follows your mood, it’s less insistent than the Ferrari. It’s like comparing a standard photograph to an over-sharpened one. The latter appears brighter, but only because it’s been enhanced.

No, I don’t think so, it’s more that you struggle to keep pace with the 488’s energy.

There is no right/wrong answer here, no good/bad . There’s just the question of what you prefer, what suits the type of driving you do. In the 488 everything’s on high alert, there are hair-trigger responses and your heart rate is almost always raised. The 720S follows your mood, it’s more placid and tolerant, but this only serves to reveal its duality of character. Because when you do go for it, the thing will rip the breath from your lungs.

The speed is savage. The turbos are close to being instantly responsive, but it’s the sense of exponential pressure that’s so staggering, of this lightweight projectile being forced down the road with wild abandon. The only thing that stops this being deeply scary is the utter rigidity of control that the chassis has, the outrageous grip and the confidence you have in the whole package not to let you down.

Twist the Powertrain and Handling knobs to ‘T’ for Track, select manual gears, maybe slacken the ESP if you’re on a very bumpy road and the amount of feel and tactility the 720S exhibits is dazzling. It’s locked down, hard, sharp and ferocious. It has higher limits than you do. It’s braver than you are. You’ll be breathing harder at the end of a good road, that’s for sure. Probably having a stern word with yourself, too.

Now, after driving the 720S some of my colleagues said that it was only when going fast that it felt exciting, but for me that’s not the case. I loved the magnificent steering all the time, I loved the way the suspension dealt with all roads, not just open, sunlit, twisty ones. I’d agree that it’s not quite as demented and rewarding as McLaren’s own 675LT, but neither is it meant to be – something in that vein will be along in due course (760LT? 775LT?).

So what’s the conclusion here?

Above all the 720S feels special. Special to sit in thanks to the glass house and the cabin’s added sense of theatre, special to just potter about in because of how well honed and tolerant the suspension and drivetrain are, special to be around because of the way it looks and the intelligence of its overall design (aero has never been so well integrated), and special to drive hard because of its sheer speed, control and determination.

Not the most nervy and exciting, nor the most visually stunning perhaps, but a car that’s been brilliantly conceived, designed, engineered and executed. Well done McLaren, because what we have here is the most complete supercar on sale today.