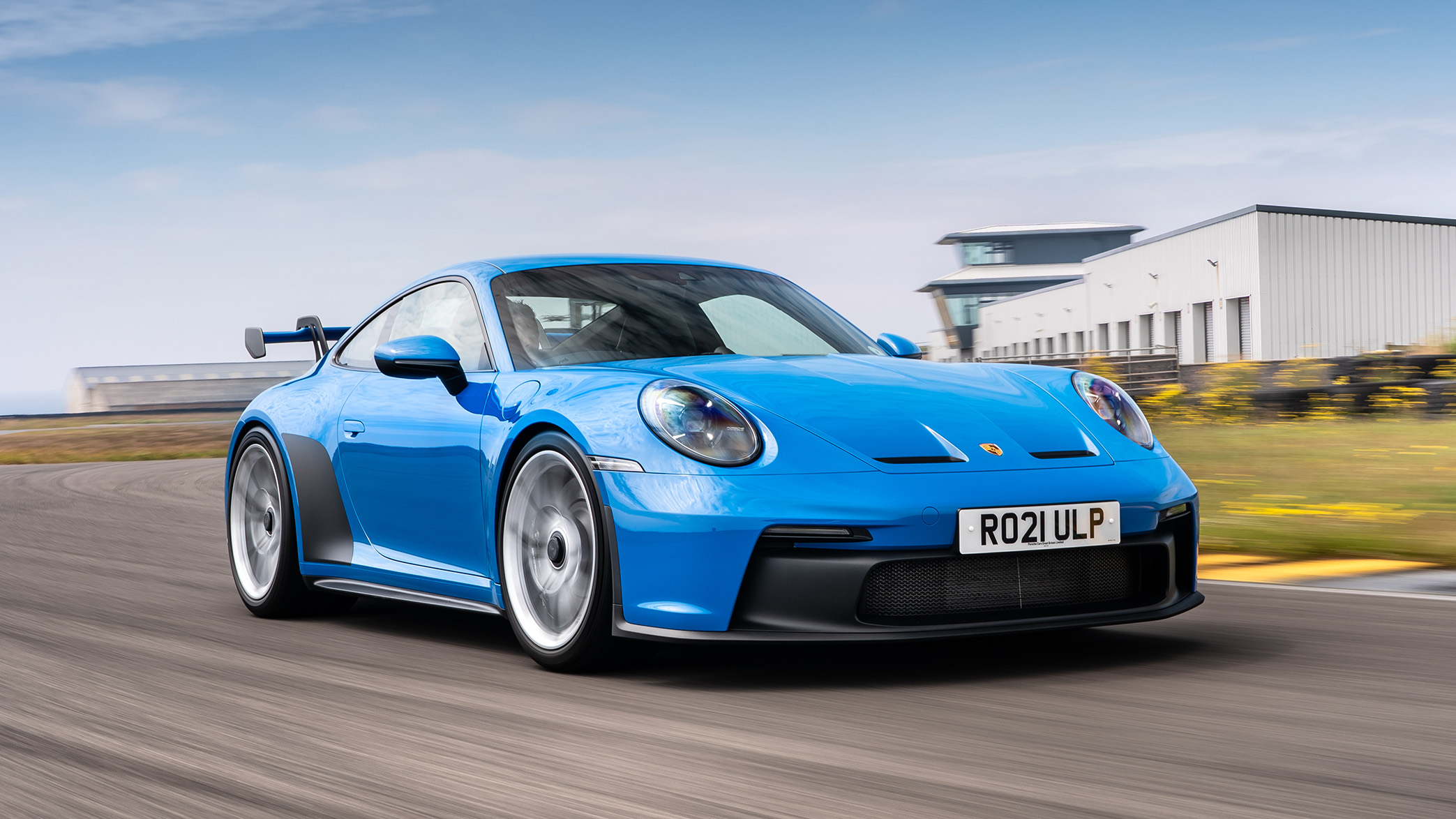 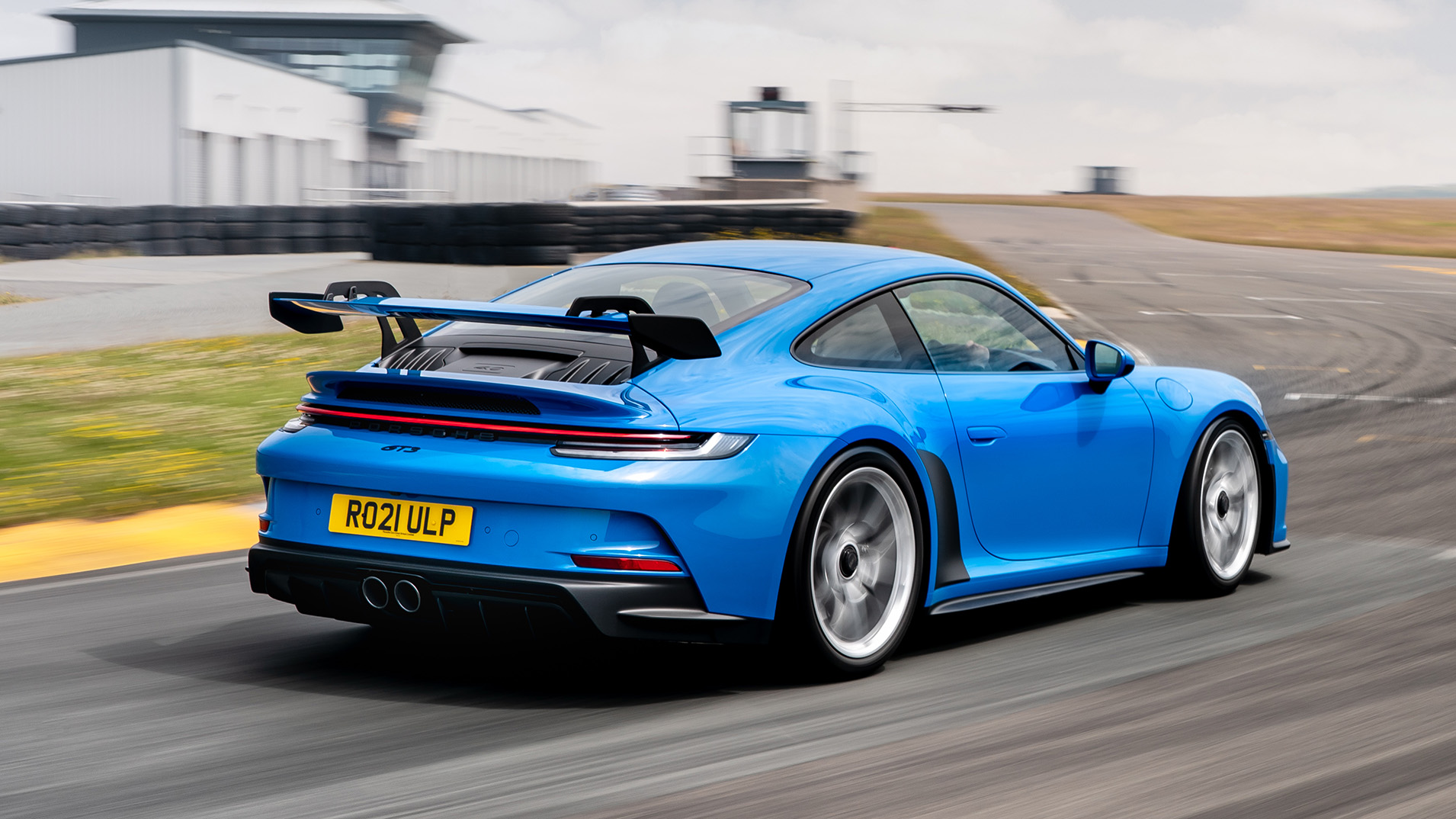 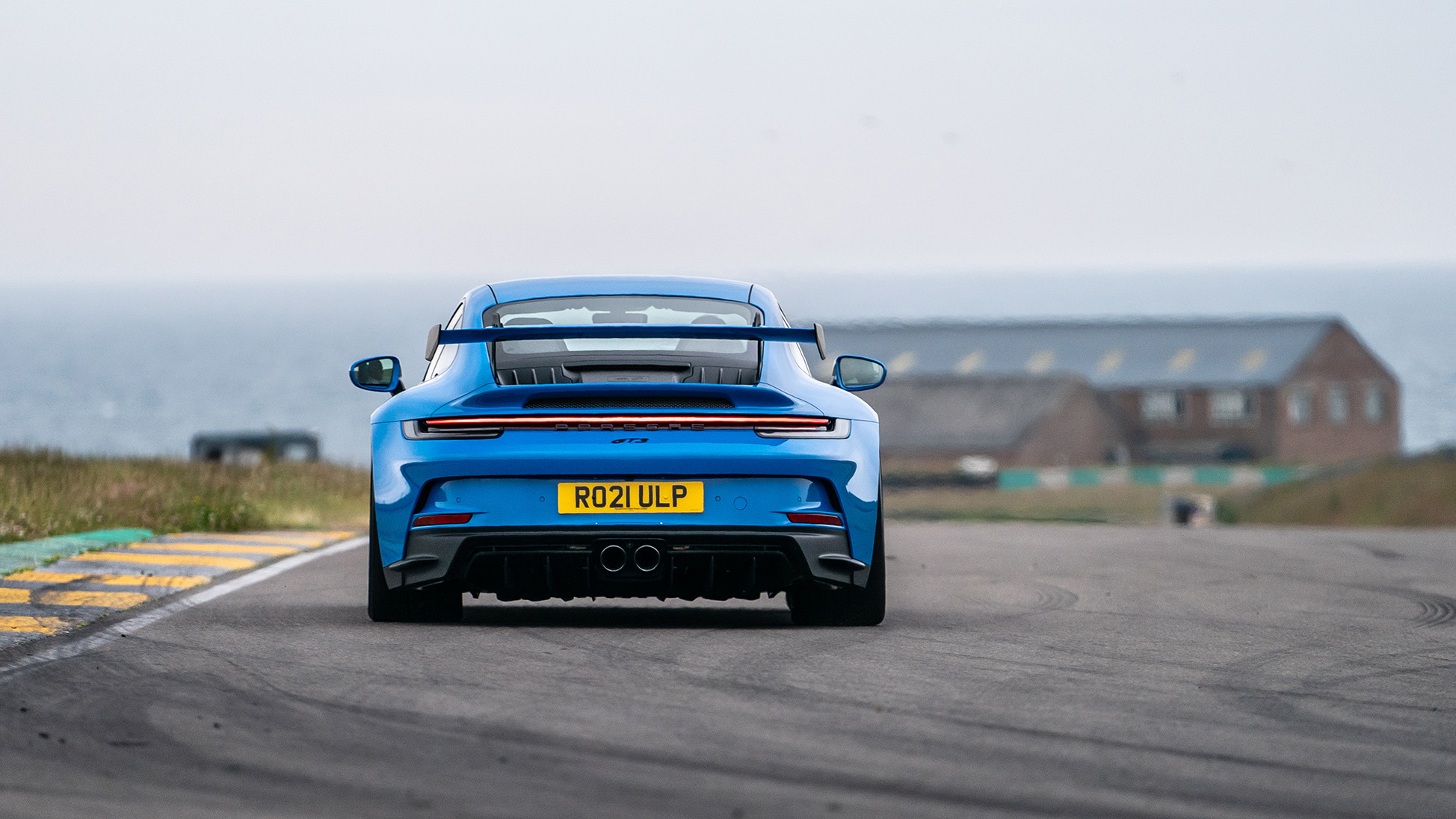 For the 992-gen GT3, Porsche is playing mix-and-match. This time, you can have the wingless GT3 Touring with a manual gearbox, or a paddleshifter.

Or, the classic winged GT3 can trade in its seven-speed PDK transmission for a six-speed manual at no charge.

Welcome to a GT3 the way they always used to be. All the aero trimmings, but still depending on a fleshy lump of water, cells and hair to prod a pedal and waggle a lever in sync to make it move.

But the GT3 is so bespoke and purposeful now. You’d never confuse it for a 911 Carrera with the optional aero kit. It drips with menace, and tells everyone that unless you’re Lord Mayor of Talentville, you’re the weak link in the package. Best be on your game.

Which bits of the spec are changed for the GT3 manual?

Not the engine. What an engine. A mesmerising 4.0-litre naturally aspirated flat-six that revs to 9,000rpm – if you’re brave enough to leave the change that late – and develops 503bhp and 347lb ft on its yowling journey to pure eargasm. It doesn’t get better than this.

You only get six forward speeds, instead of seven in the twin-clutch automatic, or indeed the seven gears a Carrera S manual offers. Porsche’s GT skunkworks reckons the joy of six is optimal, and the change quality is that bit sweeter when there’s no overdrive bolted to the right of fifth. They’re right, you know.

What does shifting my own gears do for the performance?

Porsche claims a well-driven GT3 manual will arrive at 62mph 3.9 seconds after leaving nought. Half a second slower than a launch-control equipped GT3 PDK.

It’s not until the flappy-paddled 911 tops out at 198 miles an hour that the stick-shift gets the last laugh. Because that’ll do 199mph.

Fair to say they won’t be using a manual for setting lap records then?

This is where our readers who like cars to be fast and fast alone will leave us. Cheerio, thanks for popping in.

If you’re still reading, I guess you’re the sort of person who gets off on more than just spreadsheet data.

Wait, is there a single statistic where the manual GT3 is scientifically better than the automatic?

Just one: weight. Pick the manual and your 1,418kg GT3 weighs in a cool 17kg lighter than the one with only two pedals in the footwell. That weight is ever-so-slightly better balanced over the two axles as well, but even driving the two back-to-back, you’d never tell. 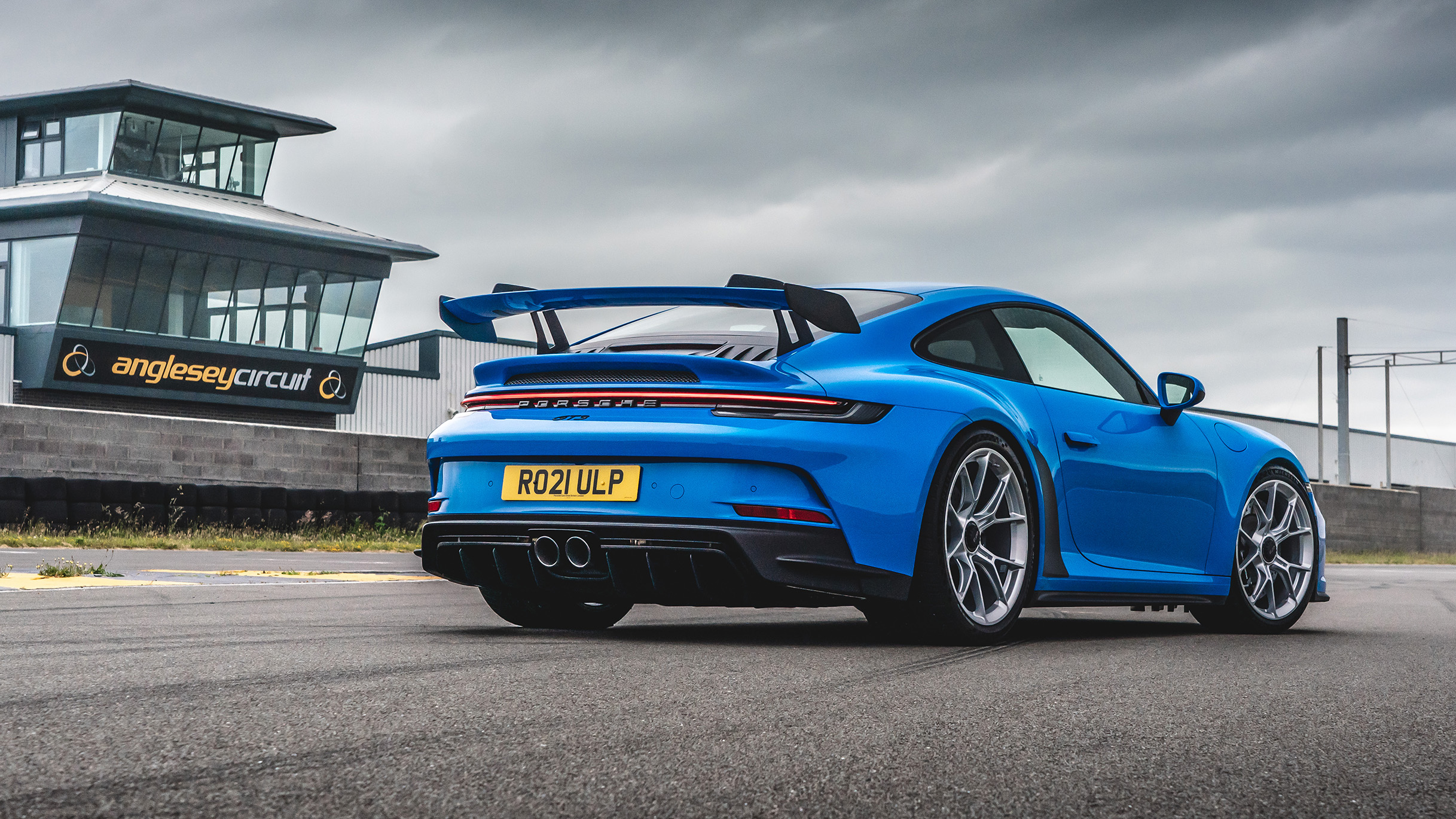 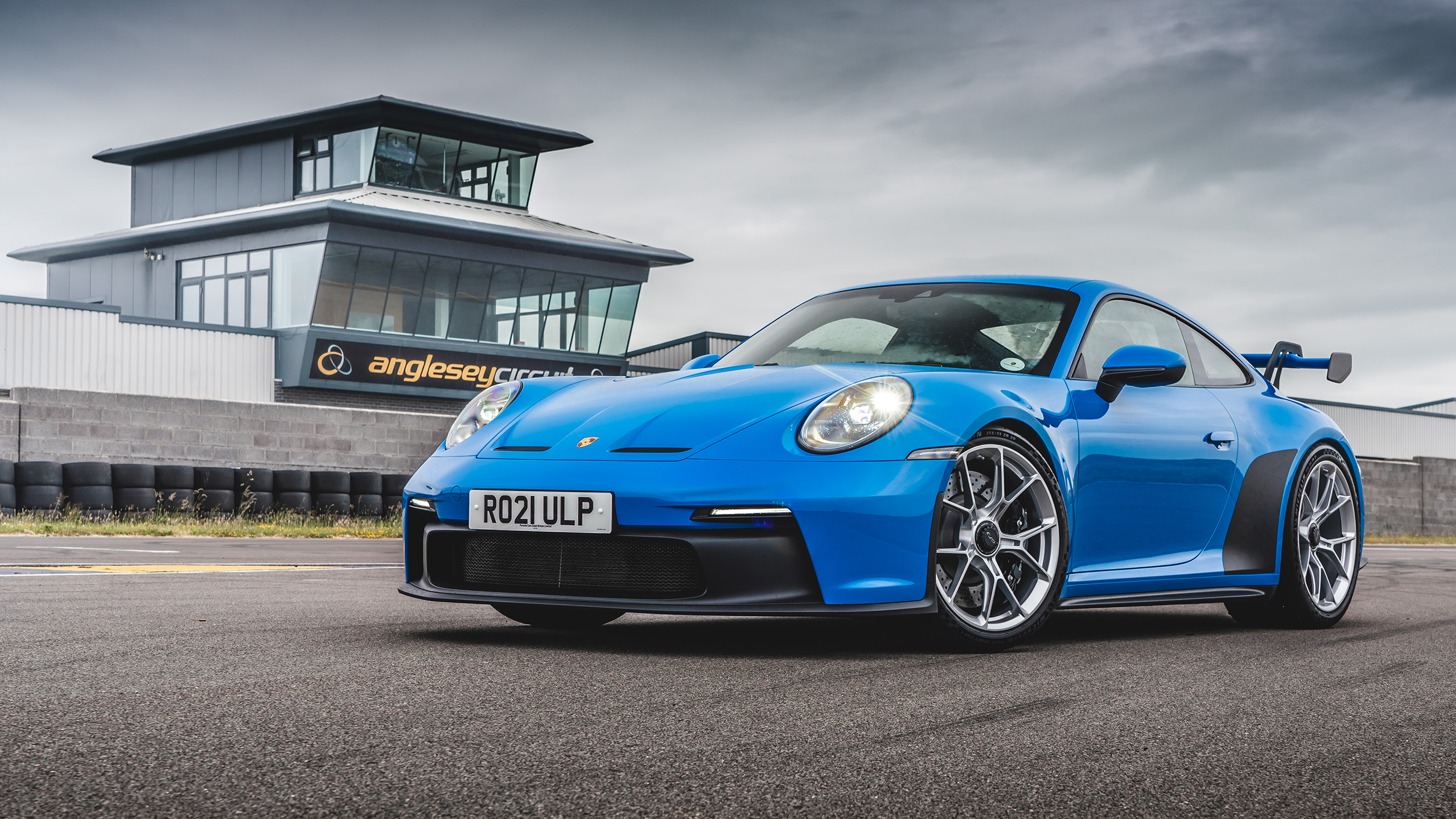 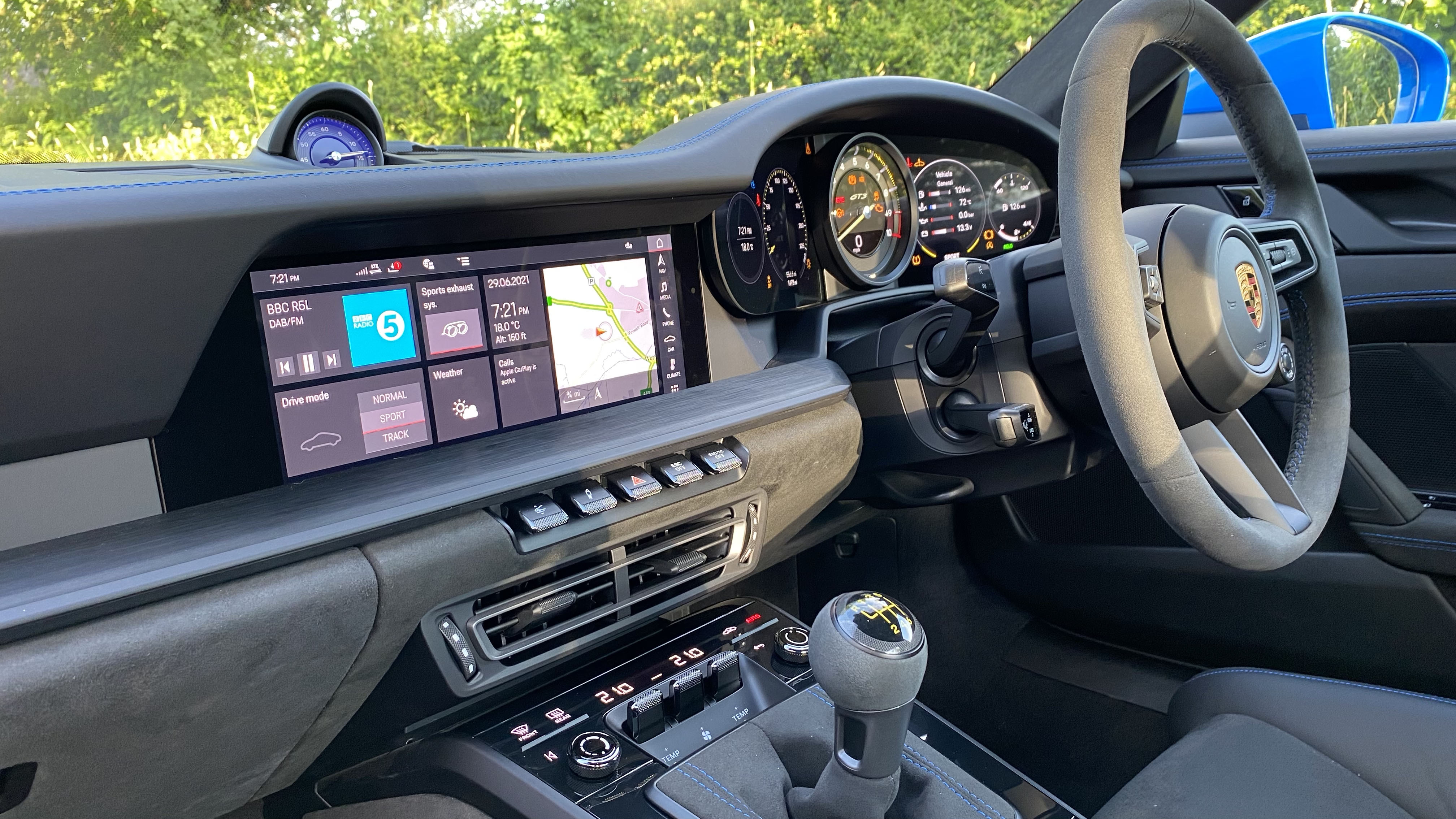 Is the GT3 very stripped out these days?

It doesn’t look or feel like it. But Porsche goes to eye-wateringly geeky lengths to keep the GT3’s weight respectable as the car gets ever bigger, techier, and they bolt more wing to its bottom.

This GT3’s got a carbon bonnet, thinner glass and even the moulding that covers the void where the rear seats would’ve lived has shed grammes. If you tick the box for the manual, you can at least argue you’re being faithful to what the engineers would have wanted.

Enough philosophy. Spare no nerdy detail: what’s it actually like?

Absorbing, but an acquired taste. The manual won’t be for everyone. It’s not simply a case of ‘I like cars and I take my driving seriously, so I’ll have three pedals, please'.

First things first: the gearchange itself is sublime: less stiff than older GT3s, with a precise mechanical sensation as you slot between the cogs and sense the teeth meshing.

The gearlever itself is perfect. No gimmicks, no trinkets. Just a round top with a glossy finish, encased in suede. Spot on. And this manic engine is such a savage that the usual Porsche moan of over-long gearing just didn’t register here.

The clutch isn’t hard work either. I always found the Cayman GT4’s legendary manual slightly blighted by a l-o-n-g travel, fairly heavy clutch. The GT3’s is lighter and you don’t need a telescopic leg to operate it. And even if you flap about the world on hideous freak feet like me, there’s space for a size 12 to rest comfortably alongside the clutch once you’re cruising.

Meanwhile, the car performs throttle blips for you in Sport and Track mode, but if you prefer to heel and toe yourself, the computer senses you’re giving the throttle a tickle and backs off.

You’ll remember the big news for this GT3 isn’t really the wing or the engine: it’s the front suspension, which is a double wishbone set-up for the first time, with considerably firmer spring rates.

Porsche’s brought this onto a street-legal 911 for the first time – despite being a smidge heavier and a pain to package –  because there are benefits to be mined in how much of the front tyres remain in contact with the road when you’re really going for it.

The effects are spellbinding. There’s no weight over the front wheels remember, but the faith you can put in the front axle to bite, hook up and scythe through a turn is utterly silly.

The pay-off is the steering feels busier now – even a little hyperactive depending on the road surface. It reminded me of a Lotus, constantly fizzing with enthusiasm and tugging at your hand like an excitable toddler. ‘Wow, feel this! Did you notice that? Cor, a surface change. Yay, cambers!’

This is steering by ADHD. For an electrically assisted set-up the sheer quantity of feedback is outstanding.

Except, this means the wheel requires management. Not in Germany, I imagine, and certainly not on most racetracks. But on British A and B-roads, and even some motorways, the GT3 needs babysitting.

And that can make deliberately removing your hand from the wriggling steering wheel to juggle gears… fraught. Each to their own. I found it an addictively rewarding experience. I love that, for all its technical nous and bleeding edge development, the new GT3 demands you bloody well concentrate.

I think we can agree we’re now at the point where this is no ‘better’ with this sort of first-world problem. It’s a spectacular car, which offers a choice of two excellent methods of changing gear.

Which you choose to buy – or fantasise over – will come down to preference, not the flaws or boons of either.

I’m not a bleeding heart manual fetishist. I can quite see how plenty of people will prefer the PDK because it makes the nine-grand redline easier to exploit, and chops lumps off a lap time.

Let’s not forget that the ‘GT3’ initials refer to a set of racing regs. This car has a motorsport engine and its aero is borrowed from Porsche’s wildly successful competition cars. And they have paddles, because paddles are faster.

So you could argue an old-fashioned stick’n’pedal in here is as inappropriate as a thatched roof on the Burj Khalifa. With the swan-neck wing mounts, that wholesale front suspension overhaul and all those macro weight savings incrementally upping the GT3’s game, the manual ‘box sticks out as more of an anachronism than ever.

Choose. You must choose. The internet doesn’t allow agreeing to disagree.

The answer, then, is to have a PDK GT3 as the daily hack and a manual GT3 Touring for the weekend.

But if I only had exactly £127,820 to spend on one… make mine a manual. Put in the effort, risk the mistakes, enjoy the rewards. It’s what driving for the heck of driving is all about.