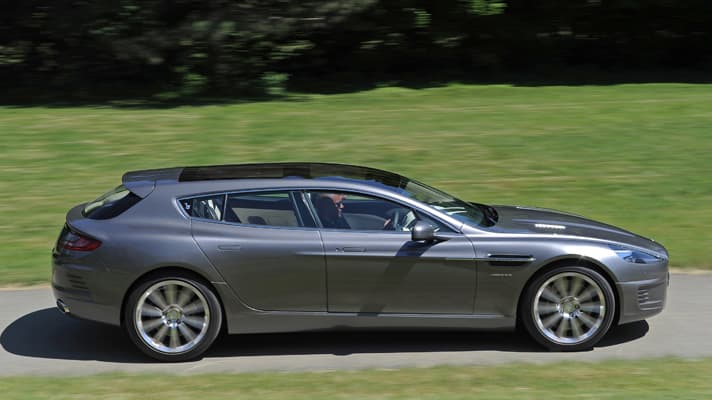 You don't need to waste your words convincing me. Just shut up and take my money already.

So soon? But I haven't even shoehorned in any exuberant motoring clichés like ‘soul' and ‘passion' and ‘heritage' and ‘ruddy hell it's gorgeous'. Indulge me, O' impatient reader.

Fine. Be quick. What is it?

It's an Aston Martin Rapide, re-imagined by legendary Italian coachbuilder Bertone as a shooting brake, in honour of Aston's 100th anniversary. A present to an old friend, if you will.

I've seen this before, haven't I?

Correct. We got a digital glimpse of this five-door beaut in February, and then in the flesh on the Bertone stand at the Geneva Motor Show in March. As you can imagine, it garnered quite a positive reaction. Bertone's chief designer - a Brit stationed in Italy - Adrian Griffiths told TG.com that there were "a number of people" interested in purchasing it. Even Aston chief Dr Bez, says Adrian, noted in his Geneva speech that, "on the Bertone stand, you will see another iteration of Aston Martin". Praise doesn't come much higher than that.

Whose idea was it?

Ah, at first the identity of the collector who had commissioned Bertone to produce this one-off was kept under tight Italian wraps, but seeing as his name is emboldened on the plaque inside the cabin, well, it's a bit pointless. Barry Weir, classic car rally maestro and Aston connoisseur, approached Bertone in the summer of 2012 with an idea. Thankfully, it was a good one. Says Adrian: "We're very lucky that a client came up to us and wanted this specific iteration. If it was something else that we felt didn't do justice to either Bertone or Aston Martin, or was fundamentally the wrong point to start from, it would have been a hard call."

Go on then, tell me about the build.

It took around three and a half months, including a ‘style freeze' at the tail end of last year, because of course, Aston itself was busy updating the Rapide too. Marek Reichmann - Aston designer and himself no stranger to sketching out gorgeous shapes (see the One-77) - was shown Bertone's original grille idea, but told the guys to wait and use the new one. "That was a really cool thing to do," enthuses Adrian.

First came the renderings, the drawings and the photographic imagery, shown to Aston - who gave the green light - after which a ‘Frankenstein' full-scale model was built out of plaster. The proportions of this were hand manoeuvred into the correct position, the model was scanned, and reverse moulds were created. Then, Bertone's crack team of engineers beat in the panels by hand. They used aluminium, sheet metal, carbon fibre, and of course, glass for that roof. Inside, the structure remains the same, other than some natty detailing with the wood and leather, and of course, the sliding boot cover (manual for now, electric in development).

The roof is a revelation. It opens up the cabin and makes it feel enormous. They're currently looking at making this glass ‘dimmable'. American Mike Robinson, Bertone's design director, told us: "We're working on making the roof have zones that you can turn down visually. Rather than have a roller blind in a 1930s style, we wanted a dimmer. This is the digital age, remember."

It's a lovely looking thing, superbly finished on the outside, with genuine headroom inside. Mike Robinson laughed that even his 6ft 5in frame had room to spare in the back. A certain economy with the truth is evident there, as actual legroom is the same as the Rapide, and still a bit tight. But this was never going to change, because, as Adrian tells us, even though there was a request to improve rear space, they just couldn't change everything as it would affect the stance and architecture of the car. "We had to make sure the integrity of the original build by Aston Martin was kept intact," he says.

So, what about underneath?

Bertone hasn't even sniffed at the drivetrain. In the words of the Italians, ‘we just tailor the suit'. So nothing changes chassis-wise. It's the last-generation Aston Rapide, which means a 6.0-litre V12 with 476bhp, and a 0-62mph time of around 5.3 seconds. We say around, because the whole thing weighs pretty much the same as a regular Rapide - around 1990kg - so performance should remain the same.

The Rapide has always been a lovely car to glide around in, and the Jet 2+2 is no different. The steering feels spot on, the damping is excellent and everything feels resolved. OK, this being a concept car/one-off means you get quite a few more squeaks, rattles and groans because of the new rear, but other than that, it's the same car. And of course, TG isn't about to start wailing around like a lunatic in somebody else's priceless, one-off collector's piece.

Naturally, Bertone won't tell us the exact price of the Jet 2+2, but rumours suggest it's worth somewhere in the region of £1.1m.

Woah. Ok, now can you shut up and take my money?

Exactly what part of ‘one-off' are you unfamiliar with? Bertone won't be drawn on the Jet 2+2's future, but, be patient... while the Italians won't be drawn on a proper confirmation, we're told ‘discussions are ongoing' regarding a small production run of these shooting brake Rapides. And that, dear readers, is a good thing.

We'll have more from the Bertone museum shortly on TG.com, so stay tuned...