£120,900 when new
Read why you can trust our independent reviews 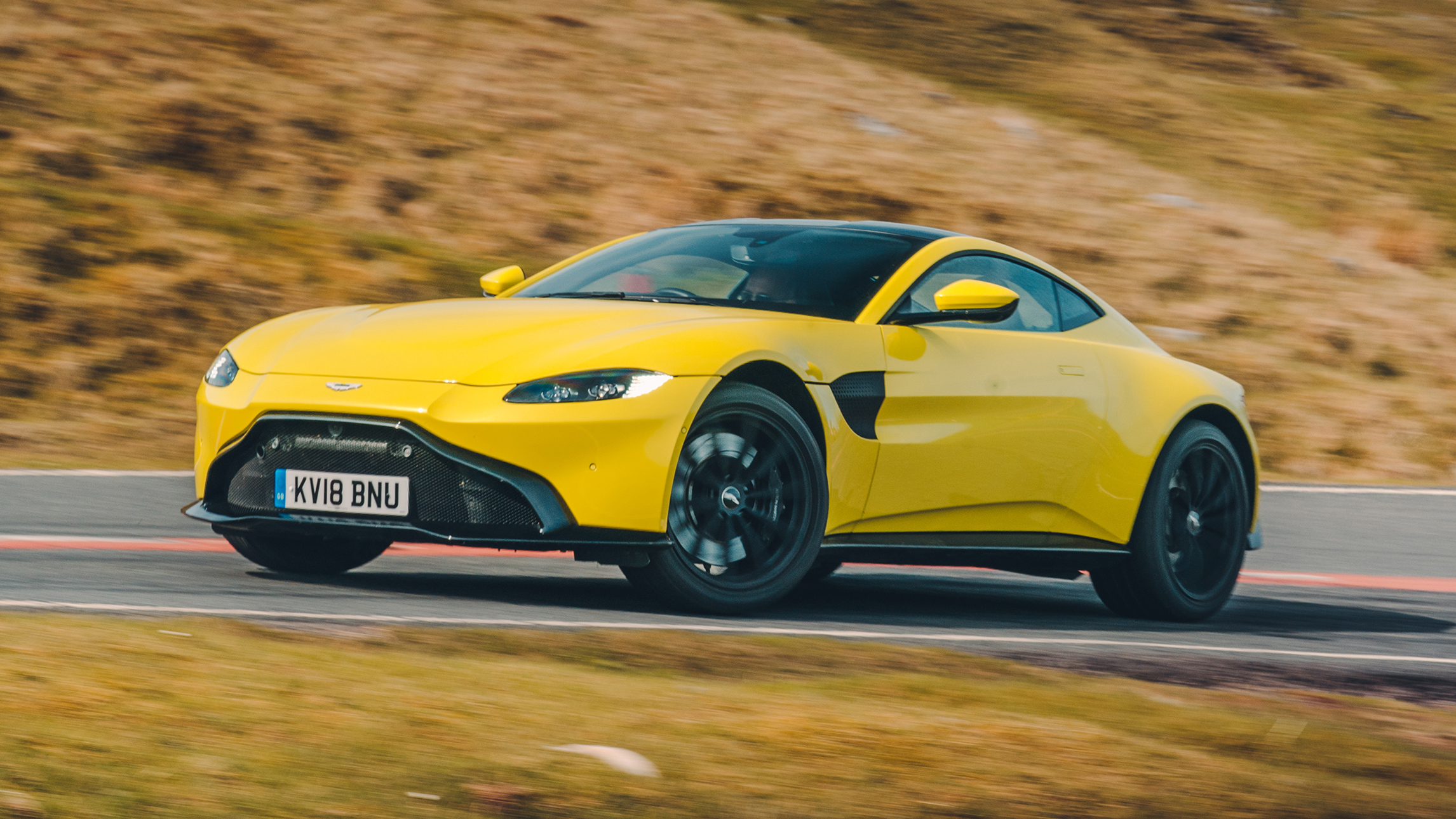 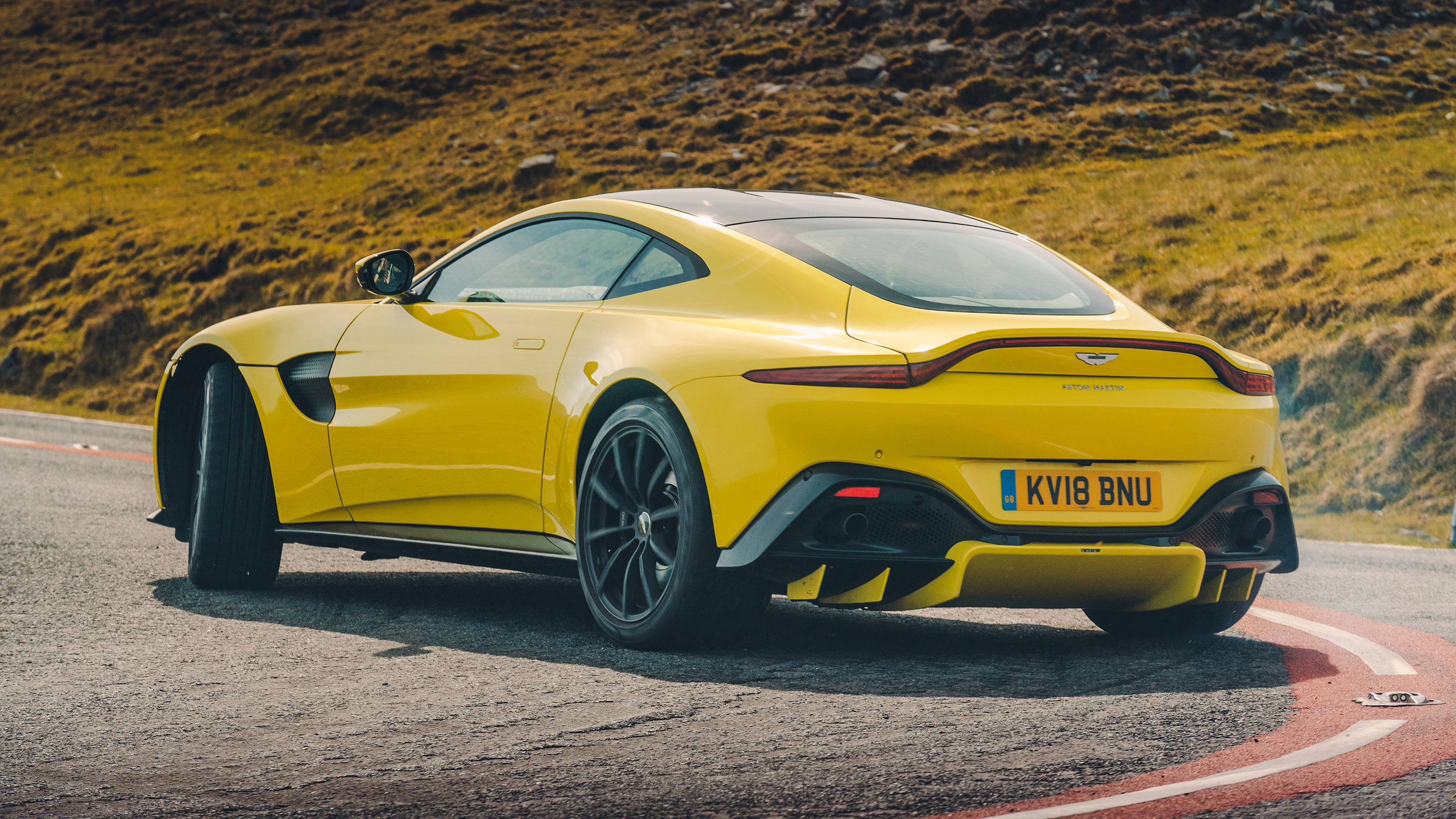 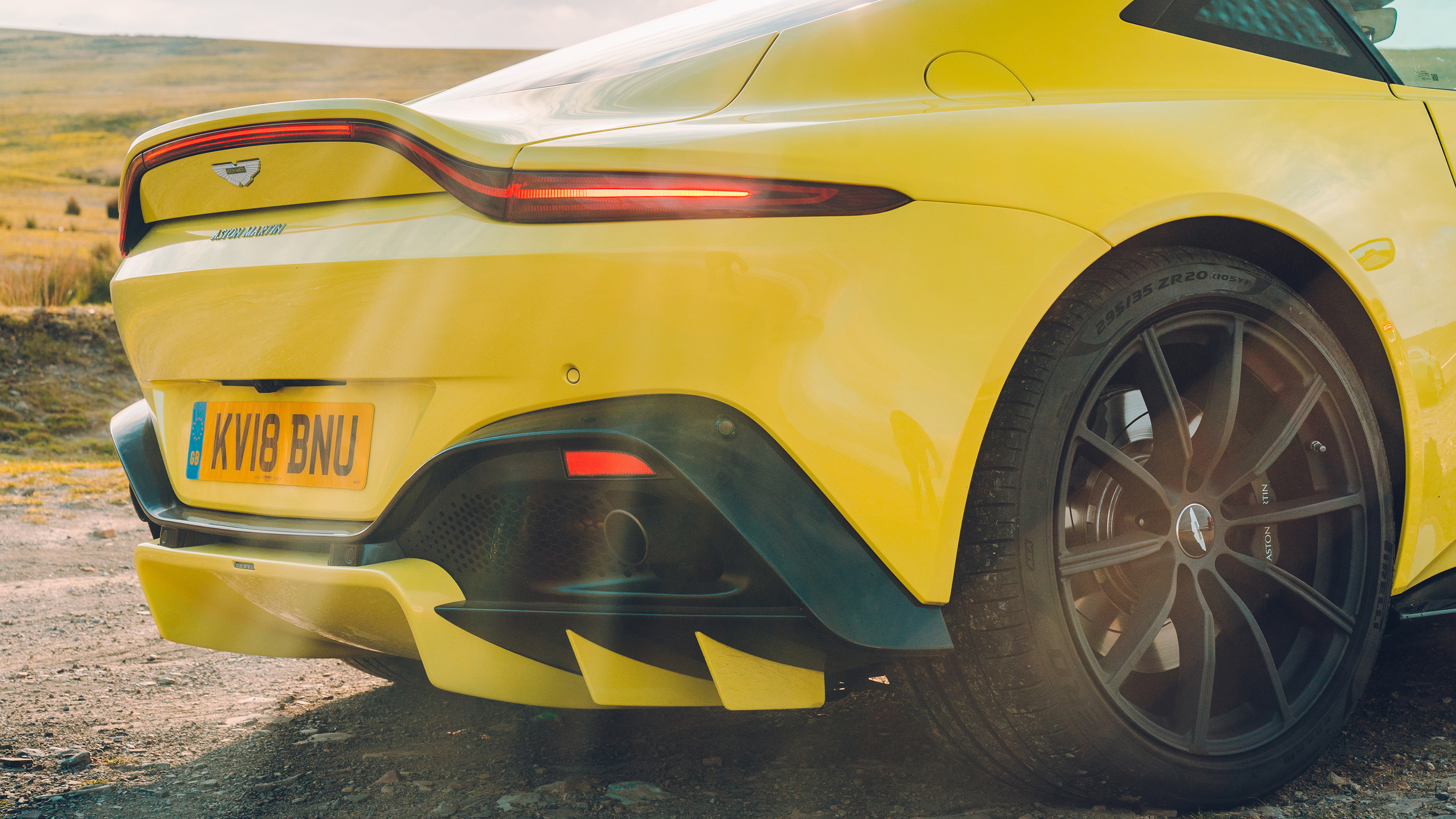 Highlighter yellow? Must be a new Vantage…

Yep, it’s the new Aston Martin Vantage, driven in the UK for the very first time. We’d be copping out if we didn’t test the most lurid colour option, right?

If you need a reminder, this Vantage is completely new, but one key component is familiar. Namely its engine, which is a 4.0-litre twin-turbo V8 like you’ll find in all manner of Mercedes-AMG products.

Here it’s mated to an eight-speed automatic gearbox and produces 503bhp and 505lb ft, enough for a fairly supercar-like 3.5sec 0-62mph time and a 195mph top speed. This is Aston Martin’s cheapest car, don’t forget, yet it out-accelerates the DB11 with ease.

I guess it’s smaller, though?

It’s a full 28cm shorter than the DB11, not to mention 260kg lighter. While it looks all wide and squat, though, it feels surprisingly (and wonderfully) narrow when you’re on the move. Which is increasingly rare in the performance car universe.

All told, it’s an incredibly punchy piece of design up close. It looks so taut and well honed. The Stabilo colour scheme risks overshadowing what’s a fantastic piece of car design, even if the Vantage isn’t as outright pretty as it used to be. For once, a restrained grey or silver might be best for showing off how good your car looks.

Enough gawping. How does it drive?

As you might expect from its greater power-to-weight ratio, the Vantage is an immediately sportier thing than a DB11. It seems quite feisty on first acquaintance, the front end reacting abruptly to your steering inputs and the throttle feeling sharp and positive. It feels poised for action, and you might need a few moments for you to smooth things out. But once you do, it’s a doddle to drive.

It’s a sports car, not a GT, so the ride is pretty firm whichever suspension mode you’re in, but the body control is ace. So while you might feel the patter of a badly surfaced road beneath your bum, the car won’t be knocked off course by it. The Vantage feels nimble and brilliantly balanced, building your confidence – and egging you on – to drive it quicker and quicker.

Which with this engine, is hardly a chore. It’s one of the very best new-age turbos out there – yes, there’s some lag, but only if you really go looking for it. It rips towards its redline with anger and, on a dry day, the tyres are mightily good at transferring all the torque to the road without issue. The way the rear wheels hook up as you get on the throttle at corner exit, propelling you forward on a wave of V8 gargle, is a constant joy. 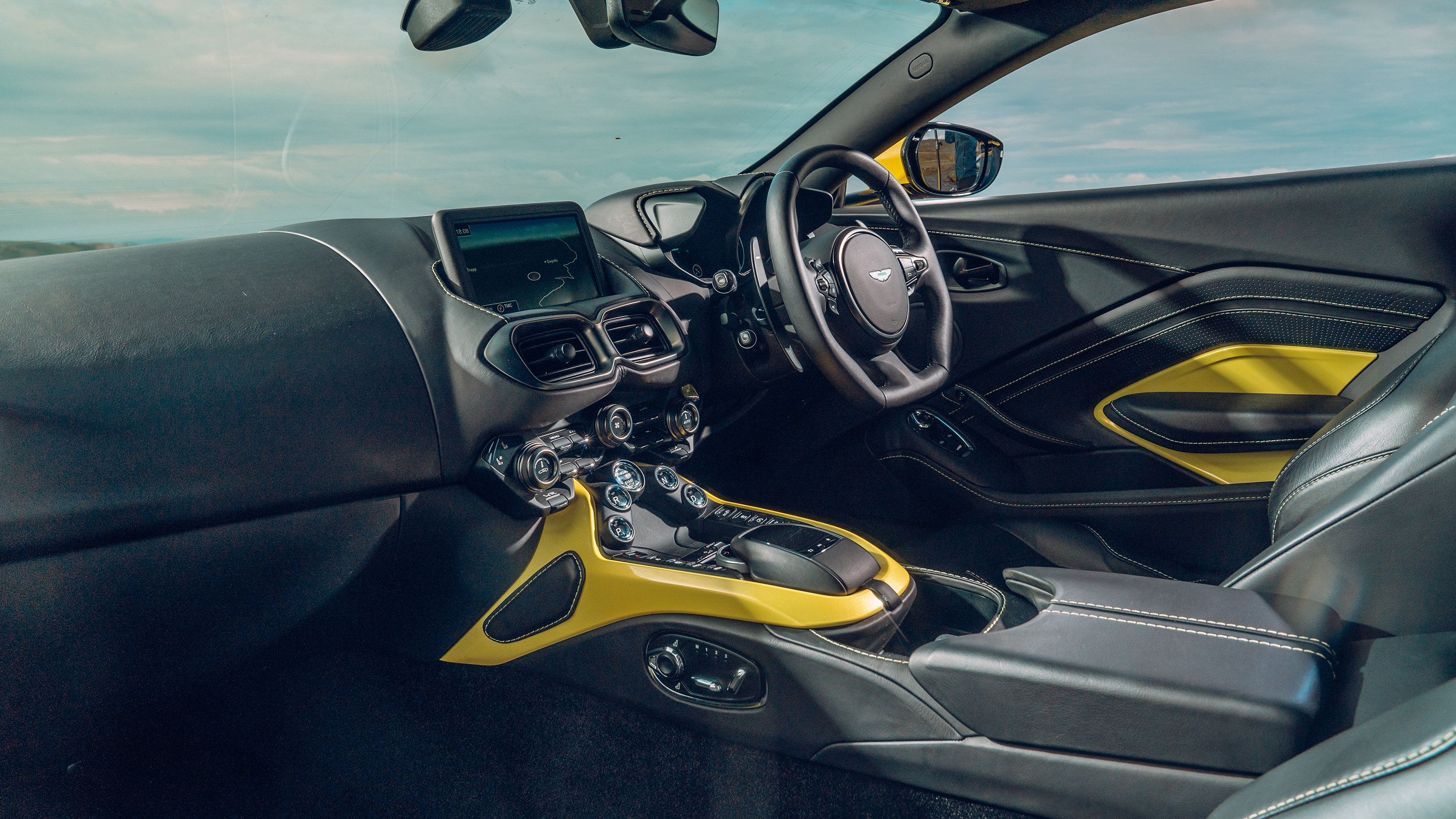 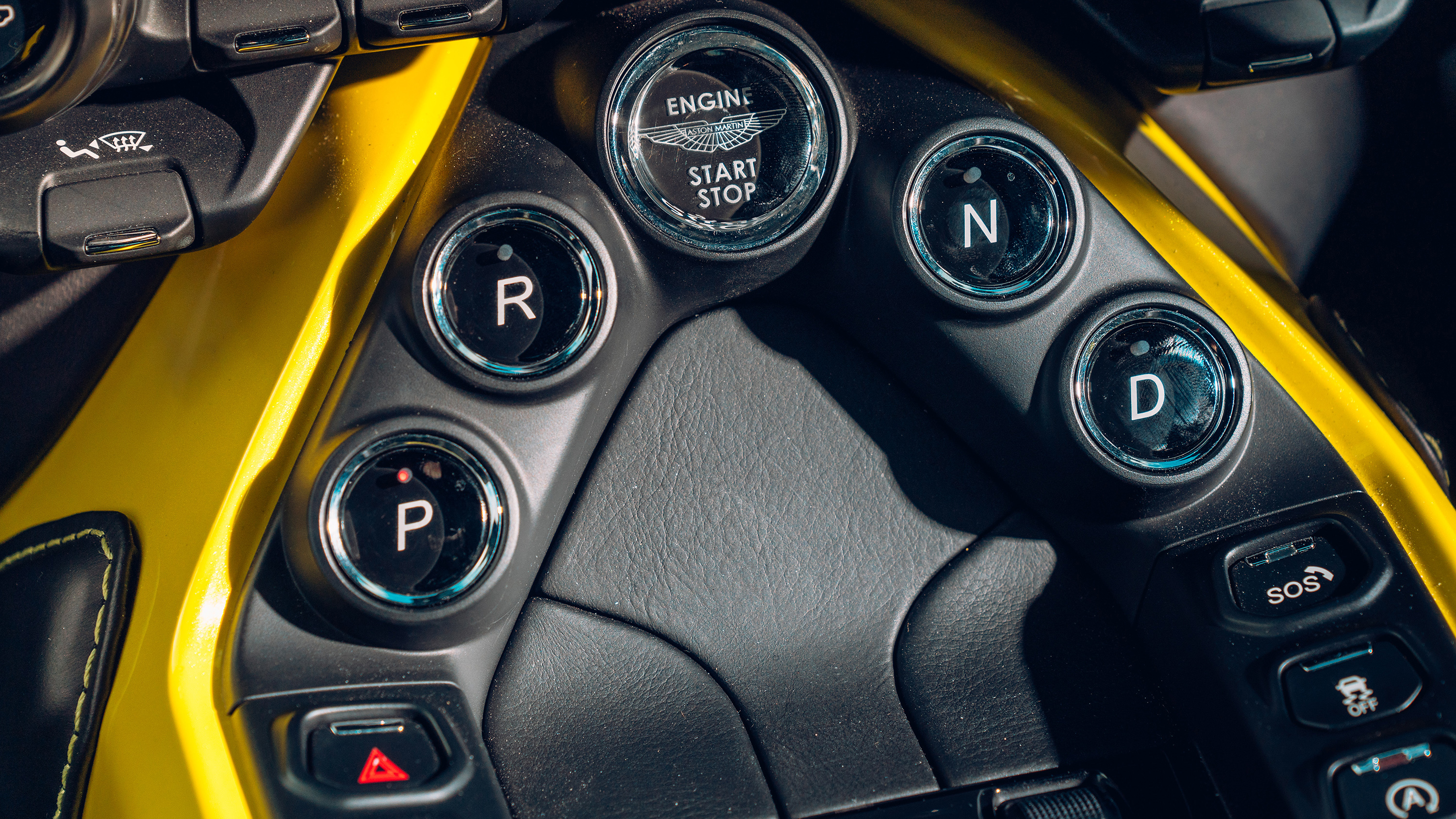 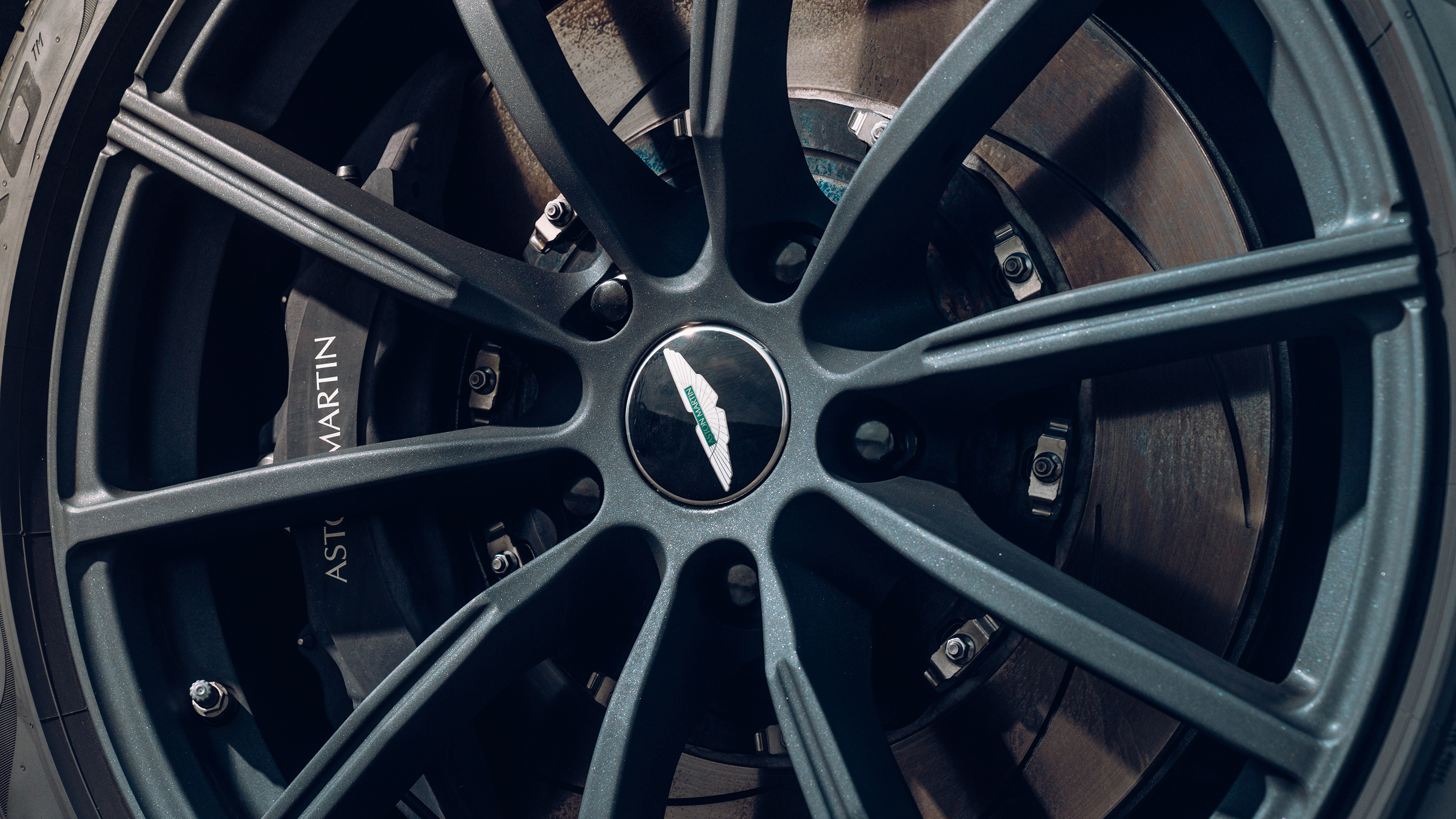 It sounds good, then?

It does, but it’s actually more of a treat for passers-by. Aston applies its own tune to AMG’s V8s, and it’s a touch more muted, while the Vantage generates a fair amount of tyre noise that can smother the mechanical soundtrack a bit.

Both engine and suspension can be quickly and easily cycled through Sport, Sport Plus and Track modes, though, and with the powertrain in the latter, you’ll get a full suite of pops and crackles, appeasing any worries that the Vantage has a developed a bit too much decorum. There’s still a hooligan if you peel back the layers.

Those driving modes are impressive, too. With independent engine and suspension buttons either side of the steering wheel, it’s fun to mix and match between them, the car tangibly changing with each toggle. You’ll almost always have the suspension in Sport mode, but the Vantage still flows reasonably well in Sport Plus if you’re really in the mood, while Sport Plus feels like the sweet spot for the engine when you’re away from dull motorway cruising.

Is it good at sensible stuff?

Tyre noise aside, it’s pretty adept, with really comfy seats, decent visibility and a reasonable amount of luggage space, while you can top 30mpg if you’re being really good. Expect lower 20s in mixed driving if you’re a bit, um, ‘keener’.

The whole interior is decidedly wacky, mind, with a few too many buttons and Aston’s oddball square steering wheel. There’s less of the ergonomic precision of a Porsche 911, but far more sense of occasion in return. It’s a shame some of the plastics can’t match rivals’ quality, and we wonder how quickly such quirky design will date. You can’t deny it looks arresting, though.

It’s Aston’s cheapest car. How cheap is it?

It’s £120,000, before options. Which could total another £20,000 without a moment’s thought. The Vantage now competes in a really tough, diverse class of cars. This sort of money can buy McLarens, Audi R8s, Jag F-Types, several flavours of Porsche 911 and the Mercedes-AMG GT, which uses the same engine as the Aston, but with more power.

The Vantage actually feels like a cocktail of all of the above – nearly as exotic as the mid-engined stuff, almost as useable as the 911, a little thuggish like the AMG. Keep your eyes on TopGear.com for a comparison test with its very toughest rivals soon.

Will Aston do a V12 Vantage again?

We’d expect so. This is just the start for the Vantage. We know a manual gearbox will come, while the small amount of space taken up by the V8 proves a V12 will fit up front with ease. The outgoing Vantage went through a process of constant improvement, with special editions galore, so expect increasingly honed Vantages in the near future. As the first of the breed, though, this is a beguiling way to kick things off.