£906 p/m
External link to
with Leasing.com
Read why you can trust our independent reviews
Top Gear Team
Published: 02 Mar 2021
Skip 15 photos in the image carousel and continue reading 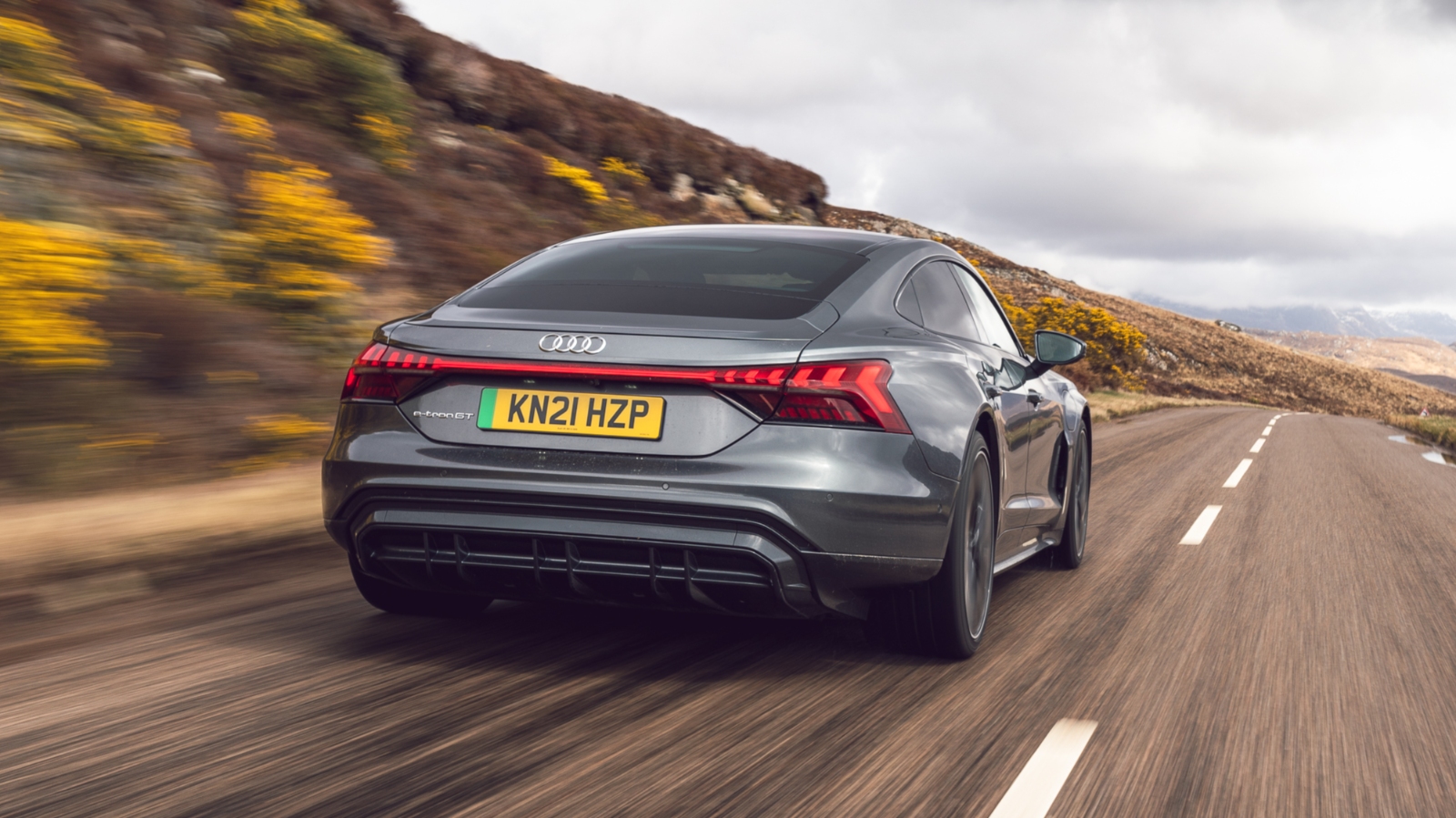 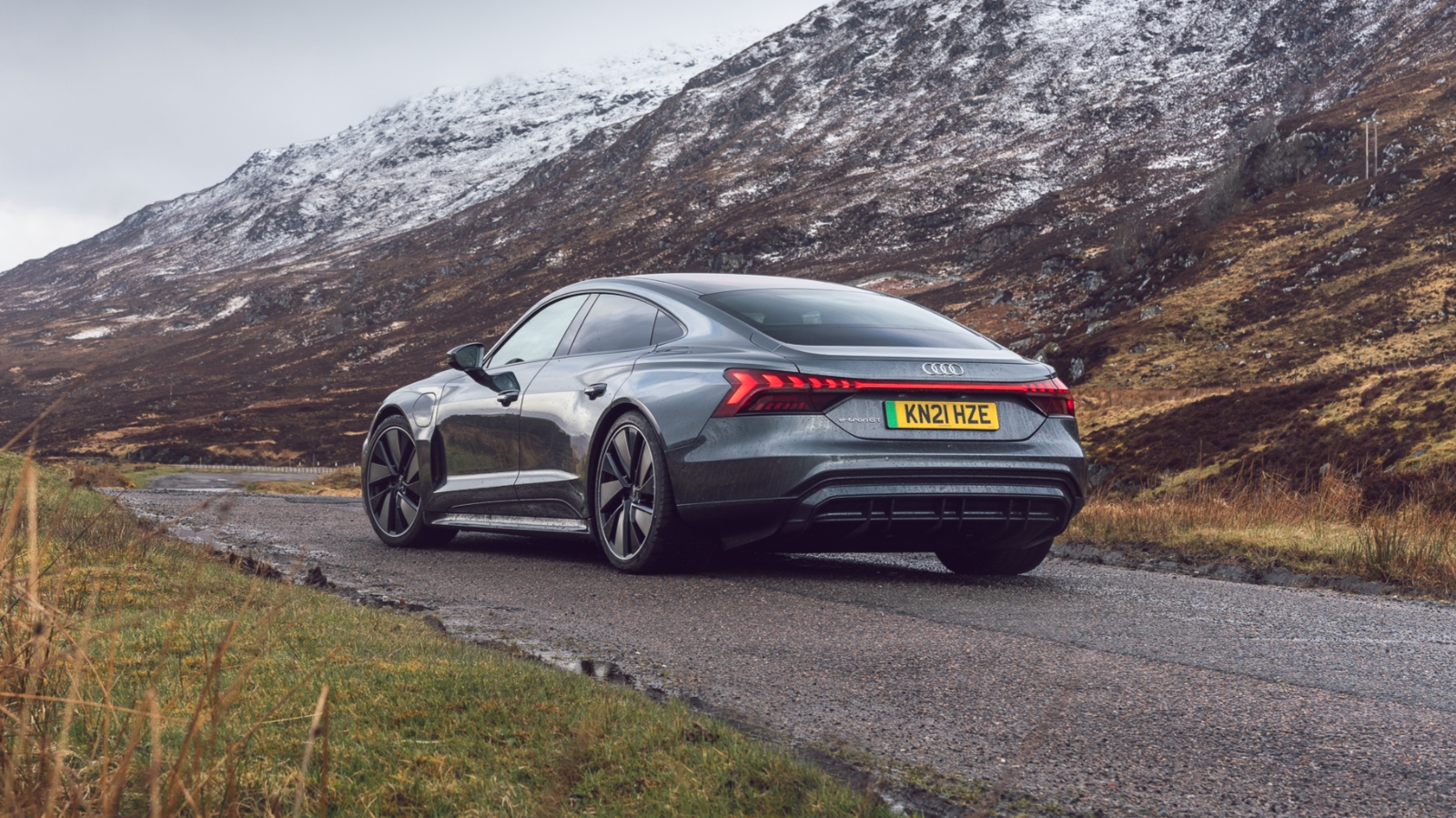 1 / 15
Advertisement
“A handsome four-door GT that plays to Audi's strengths, with a blistering turn of pace ”

This is the Audi e-tron GT, the sister car to the Porsche Taycan – based on the same VW Group J1 platform and containing much of the same technology – albeit wrapped in an extremely sharp suit. It’s not the first pure-electric Audi of course, that title goes to its ever-growing line-up of e-tron SUVs, but it’s definitely the most exciting.

So it's the same sort of deal as the Taycan?

There will be two versions of e-tron GT, initially at least: the ‘entry-level’ e-tron GT quattro and the full-fat RS e-tron GT. Yup, this is also the first electric Audi to wear the RS badge. Both have a motor at either end for four-wheel drive, both have the same two-speed gearbox as the Taycan on the rear axle to maximise acceleration off the line, but also elevate efficiency at higher speeds, and both feature a 93kWh battery as standard – no shorter range 79kWh, or rear-wheel drive option like the Taycan here.

Hit me with some performance figures.

The ‘quattro’ produces 469bhp, or 523bhp for a 2.5 second boost when you engage launch control – enough for 0-62mph in 4.1 seconds and a top speed of 152mph. Too slow? The RS gets 590bhp or 637bhp on overboost making it the most powerful RS model to date, albeit in brief bursts, capable of 0-62mph in 3.3 seconds (half a second slower than the Taycan Turbo S, and 1.3 seconds slower than the new Tesla Model S Plaid) and a top speed of 155mph. Rib-crushingly quick, then, just not quite as sadistic as the Porsche.

So why get the Audi over the Porsche?

So, the Audi is being pitched as more of a rapid GT than a four-door sports car. Fast, but not as fast as the Porsche. That theory holds true when you get the measuring tape out, too. The Audi is a fraction longer, a little narrower and a few cm taller than the Taycan, there’s a bit of extra boot space too – 405-litres in the back, another 81 in the nose. But in isolation you won’t notice the difference, this is a low, long, wide and lean looking four-door that hoovers up attention wherever you go in it.

Despite sharing its bones and gizzards with the Taycan, both cars won’t be built in the same place. The e-tron GT will be assembled alongside the R8 at Audi’s Neckarsulm factory, which puts a bit of a cap on the number it can build, initially at least. Audi reckons “something in the high four figures” a year is achievable – so roughly a 10,000-unit ceiling – compared to the 20,000-odd Taycans Porsche flogged in 2020.

“A handsome four-door GT that plays to Audi's strengths, with a blistering turn of pace”

The e-tron GT’s real strength is it’s not trying too hard to be a car from the future. It’s simply a handsome four-door GT that plays to Audi’s strengths – namely a high-quality interior, comfort and useability and a belting turn of pace that’s more than worthy of the RS badge. An electric powertrain fits the brand’s aspirations as a tech-leader, too, which means there won’t be nearly as much fuss as when Porsche took the wraps off the Taycan.

In a world where Tesla is claiming a 400, even 500-mile range on the latest Tesla Model S, the Audi’s 300-mile range will still be a limiting factor for some, whether they need to cover big distances regularly or not. But it shouldn’t be, because in every department this is a hugely impressive car: comfy enough to be a daily driver, but with face-melting acceleration in its locker; a practical four-door car, but with chiselled good looks – if the one sacrifice for accessing all that talent is planning your road trip routes carefully to incorporate some rapid charging, then it’s a small sacrifice to make.

Now for some bad news. There are no plans to offer a simpler, rear-wheel drive version like the Taycan (our current pick of the electric Porsche range), and no plans to follow the Taycan Cross Turismo with an Avant version of the e-tron GT. Disappointing, given Audi is the fast estate company, but there’s plenty of time to change its mind.

Is it better than a Taycan? It offers a fraction more comfort and space and a smidge less speed, but really the differences are minute. It’ll come down to which brand you prefer and which body you’re drawn to – and on that basis the e-tron GT is in with a shout of ruffling some feathers in Stuttgart.