£147,765 when new
Read why you can trust our independent reviews 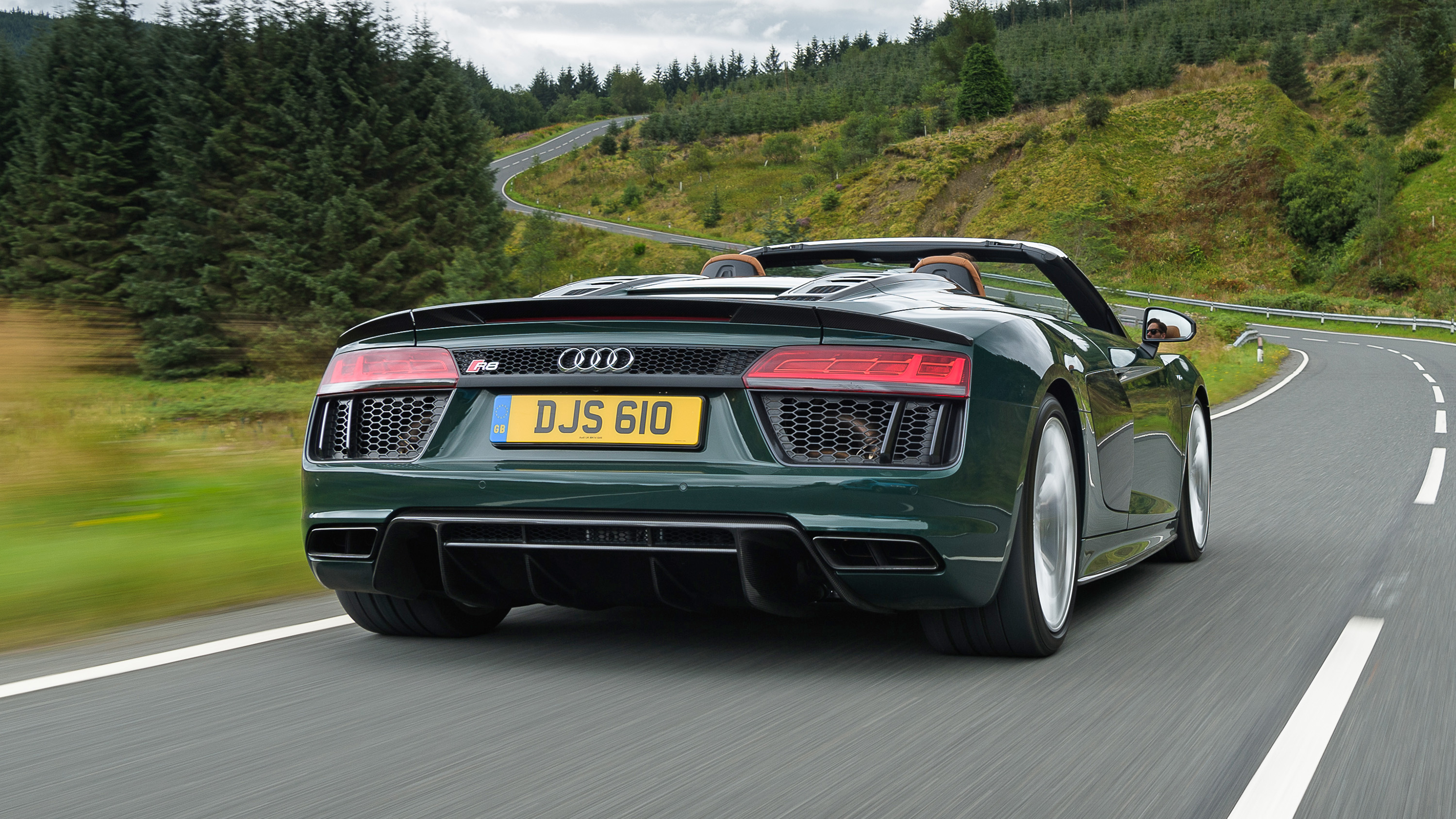 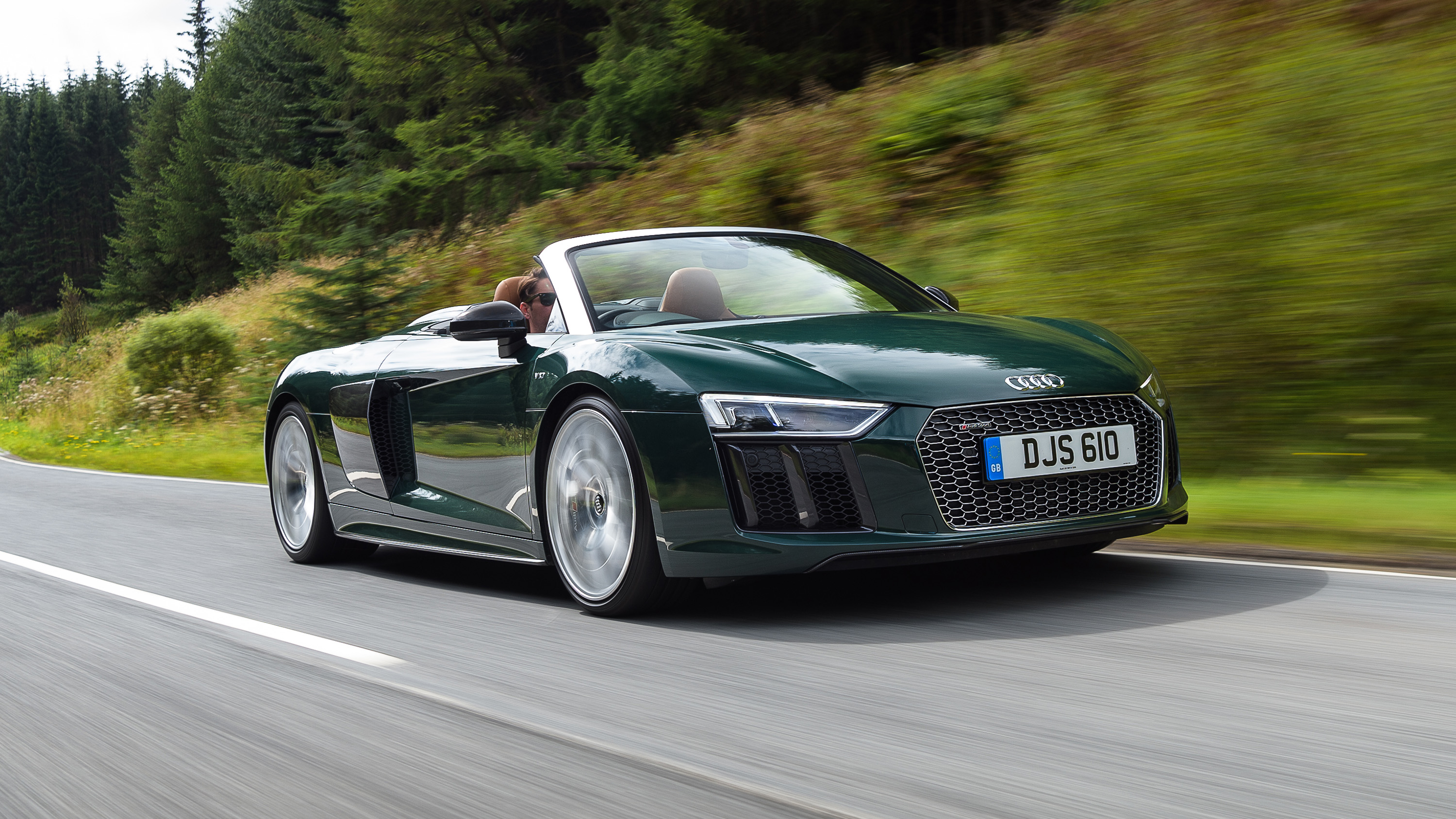 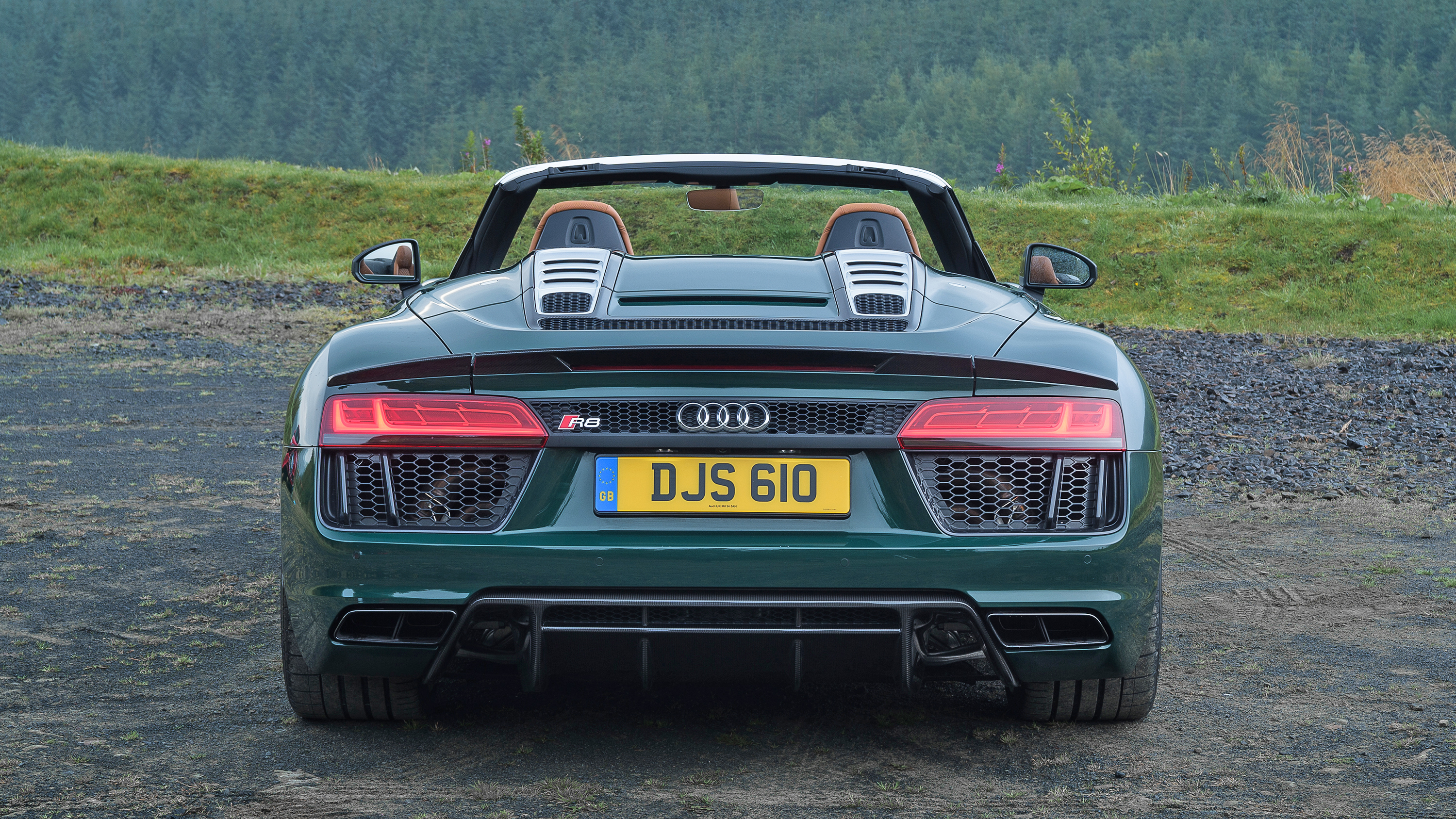 A new R8 Spyder? Just in time for autumn…

Well, yes. But if ever there’s been a convertible that’s not about merely sunning yourself, it’s this one. The Audi R8 Spyder is a supercar with occasional tanning facilities, rather than a cabriolet hopelessly trying to be sporty. And this is the most powerful one yet.

The second-generation Spyder launched last year, with only the R8’s lesser-powered V10 available. Its 533bhp was hardly lacking, mind. But now Audi has snaffled the 602bhp, 5.2-litre V10 from the range-topping R8 Plus and slotted it under the long rear deck of the drop-top. The R8 Spyder Plus is precisely £15,000 more than the standard Spyder. Which means it tops £145,000.

Yep, Audi’s charging VW Polo money for a VW Up-sized power increase. But the Plus treatment doesn’t end at another 69bhp.

There’s also a copious amount of carbon trim – fixed rear spoiler included – plus standard-fit bucket seats, ceramic brakes and variable Performance modes for the powertrain. That adds up to over £13,000 in options on a standard R8, leading us to conclude this Plus is far and away the value choice of the range.

Move on to how it drives, please.

All that is good about R8s is here in spades, it’s just marginally quicker and sharper. I think you’d need some timing gear and a very straight piece of track to really tell them apart in terms of performance, though.

It’s not that a 13 per cent power increase is small, it’s just that, on top of an already quite plump power figure, it doesn’t make itself obvious. And despite being absurdly quick, speed isn’t the R8’s USP anyway – it’s the noise and drama it makes attaining that speed. There are no turbos, so you can rev and rev (and rev some more). The redline sits past 8,000rpm.

And holy hell, it sounds good. This is where the Spyder’s USP comes to the fore, too. Our entire time with it was accompanied by sodden tarmac and unrelenting rain. Yet at no point did we wish the sun would come out. That’s because the R8 offers two solutions to sub-ideal Spyder conditions.

One, you can drop the little glass window behind your head, and the V10’s sensational wail pours into your ears through the letterbox gap that remains. Two, you can drop the roof entirely (a 20-second, fully electric operation) and drive at a speed the rain can’t scientifically hit you at. 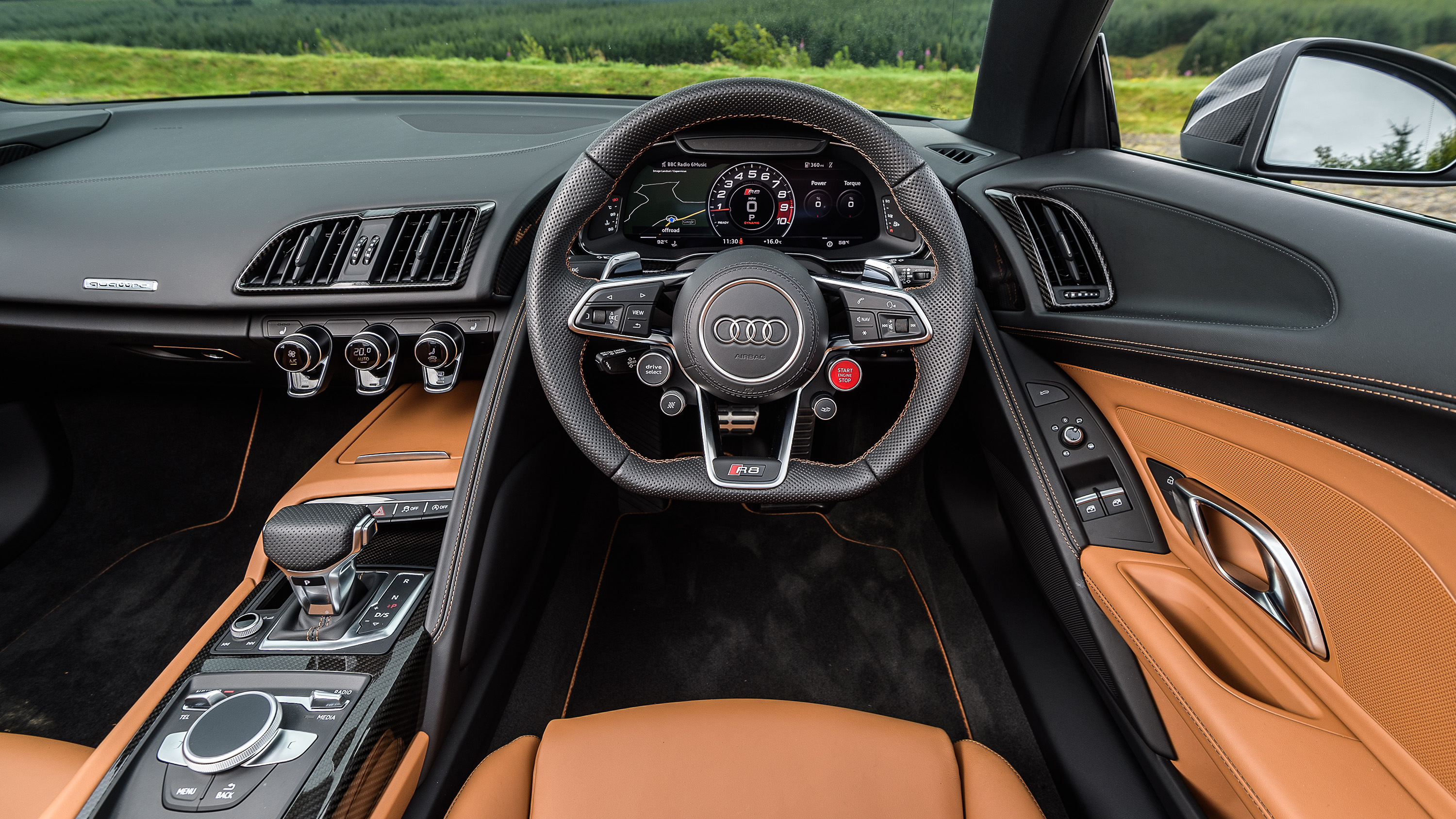 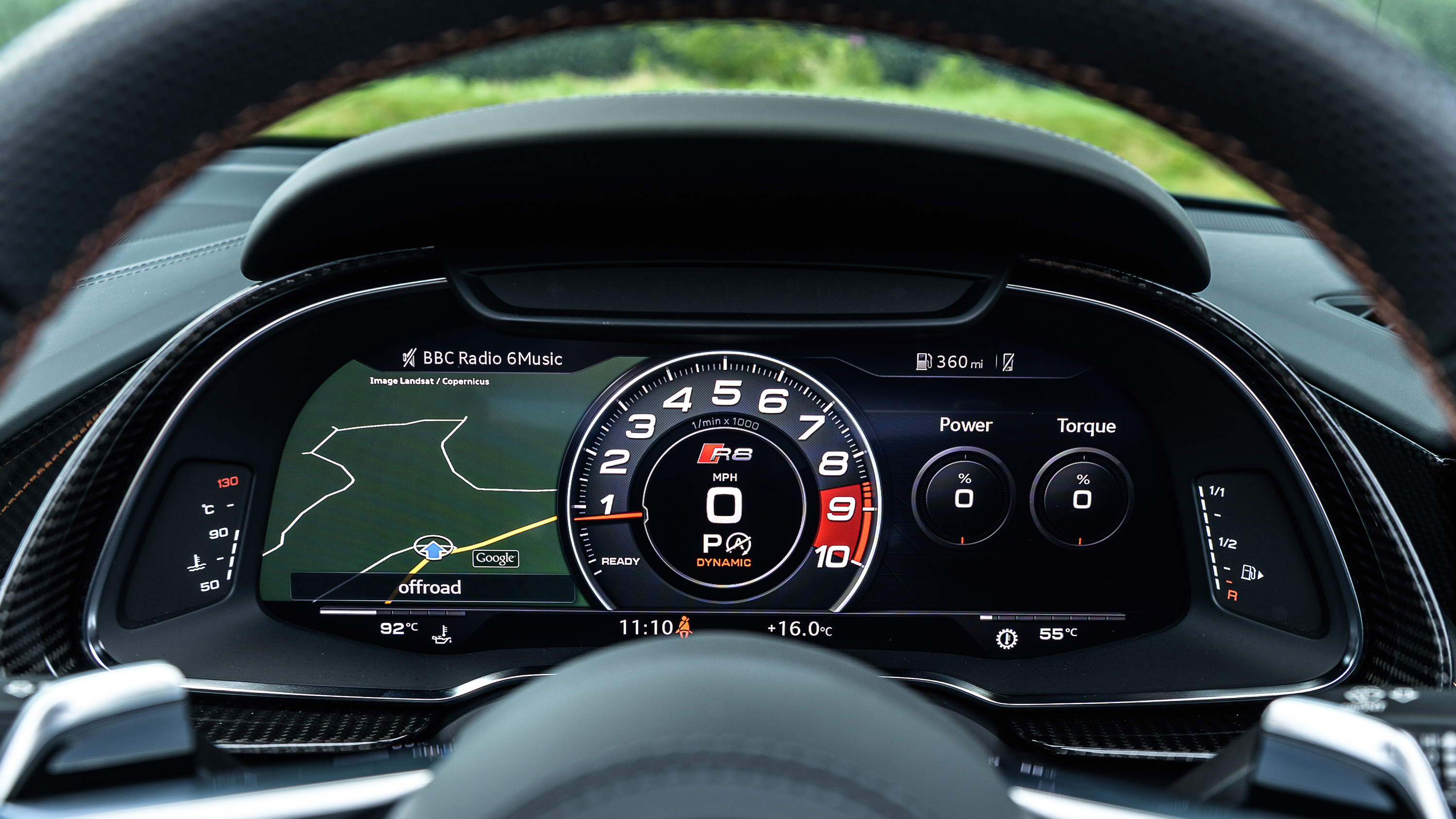 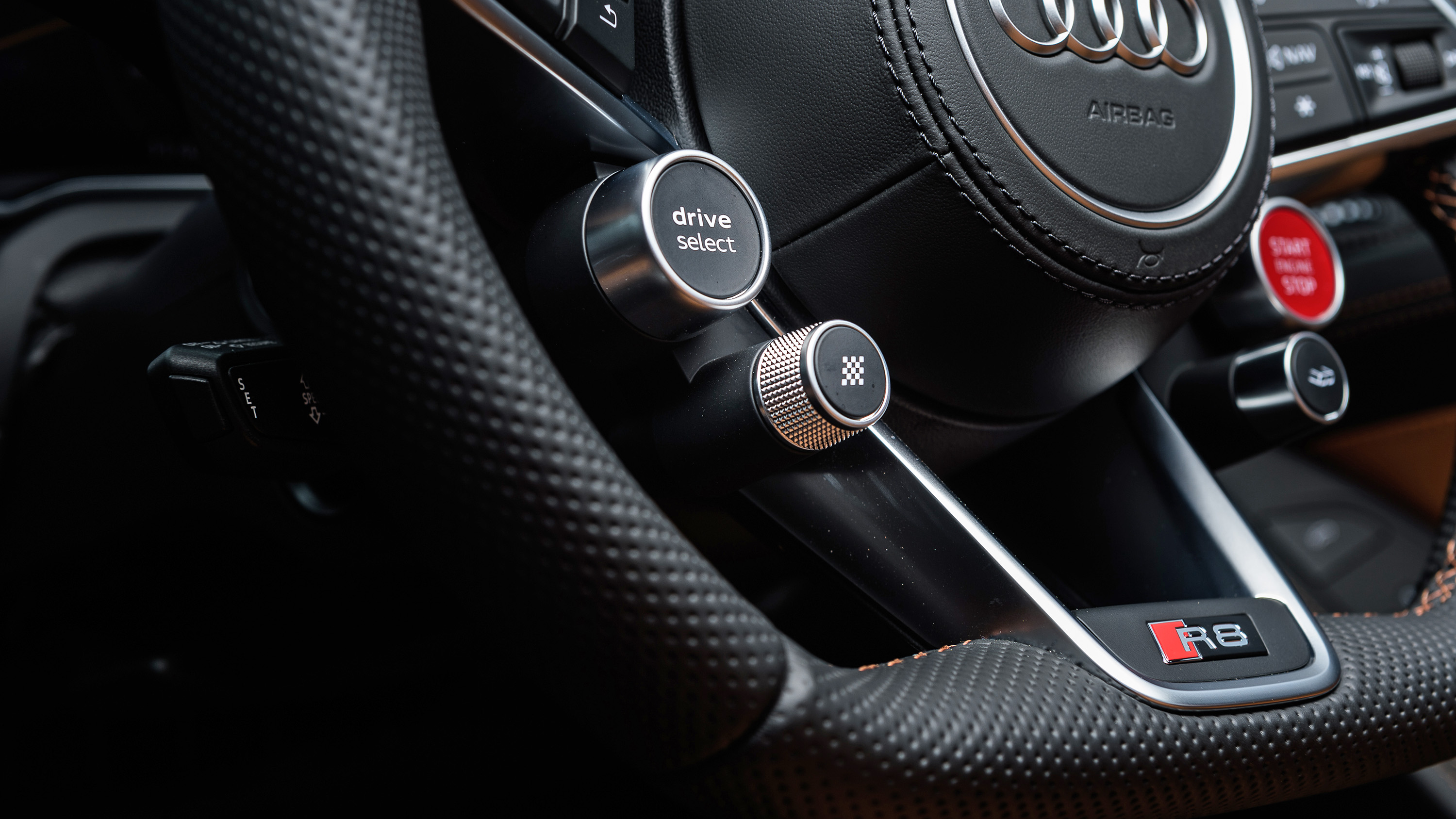 No. That theory’s almost certainly nonsense.  But wet weather is ideal for feeling thoroughly involved in what the chassis is doing. The mixture of 602bhp, extraordinary four-wheel-drive grip and a whip-crack seven-speed paddleshift gearbox means that, in the dry, this is a car with almightily high limits.

With a bit of dampness, though, and with the electronic nannies loosened – quickly done by twiddling the little chequered flag dial on the steering wheel, which unlocks the Dry, Wet and Snow options of Performance mode – you can start to feel like you’re make a useful input into which direction the R8’s pointing.

Bad stuff? This is still a 1.7-tonne car, and while it shrugs off its mass with hilarious abandon in a straight line (and around corners, too), you’ll feel it on the brakes. On track – hardly a natural clime for a cabrio, but a good place for testing a car this powerful – the brakes have an unenviable task on their hands, and wilt surprisingly early for ceramics. At normal road speeds, though, they should be adequate.

Tell me about the Plus’s other goodies.

After the Performance knob and the brakes, the next biggie is the bucket seats. These might be contentious. They have less adjustment than standard R8 seats, which in the coupe, isn’t an issue. But the Spyder isn’t just a simple roof chop, and its more reinforced structure slightly shortens the R8’s cabin.

Taller drivers might find the Spyder a little tight inside, so it’s probably worth having an actual sit in some cars if you’re over six foot, and not just prod wantonly on the nicest bits of the configurator without visiting a dealership.

Mind, the seats can make a tremendously nerdy boast: their Nappa leather has special pigmenting to stop them heating up when they’re hammered by the sun’s rays. A rainy couple of days in Scotland didn’t give us the chance to try out that particular claim. But they did make us fall for the R8 Spyder Plus. Wintry weather may be coming, but this is a convertible that will laugh it off.