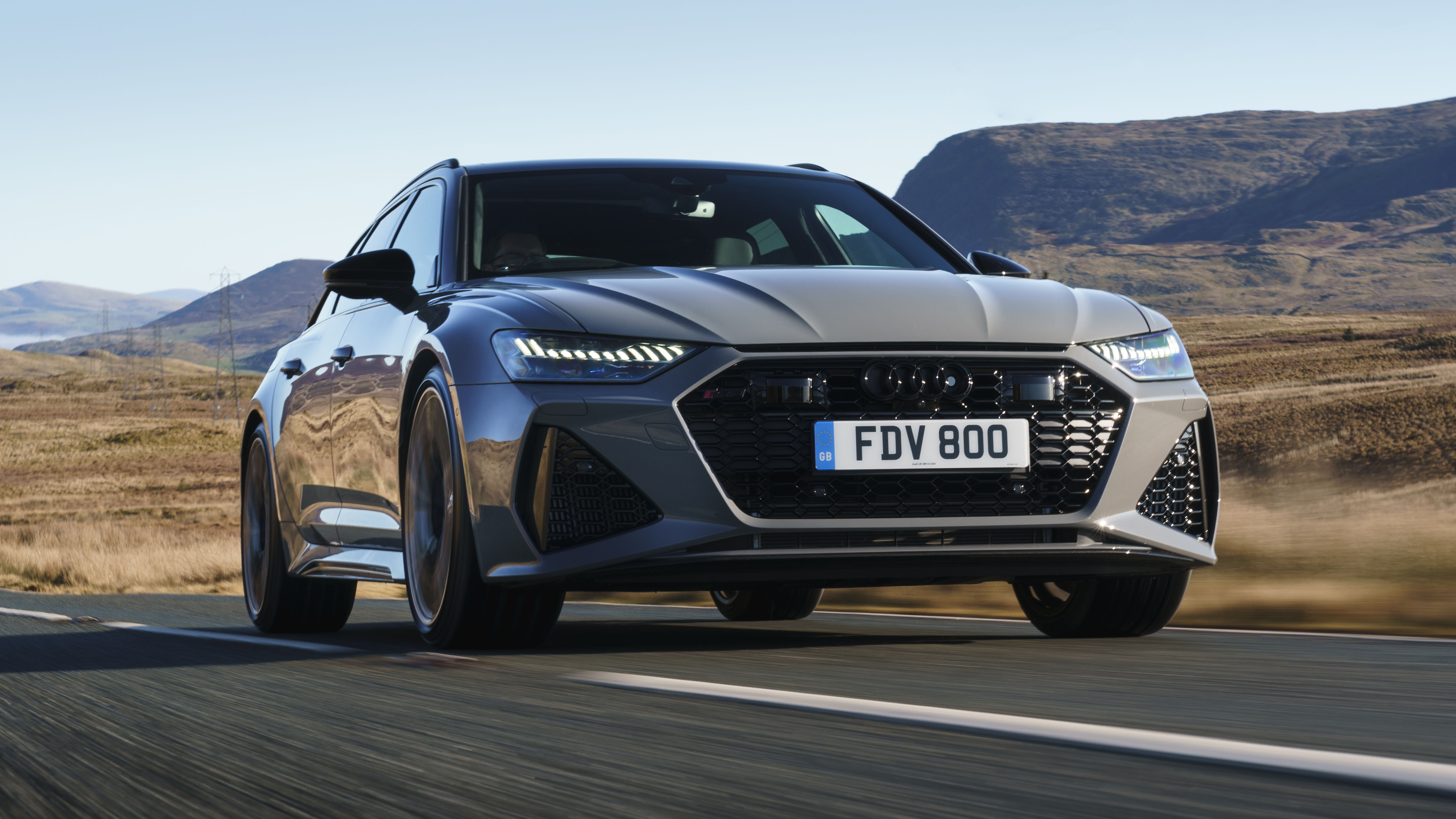 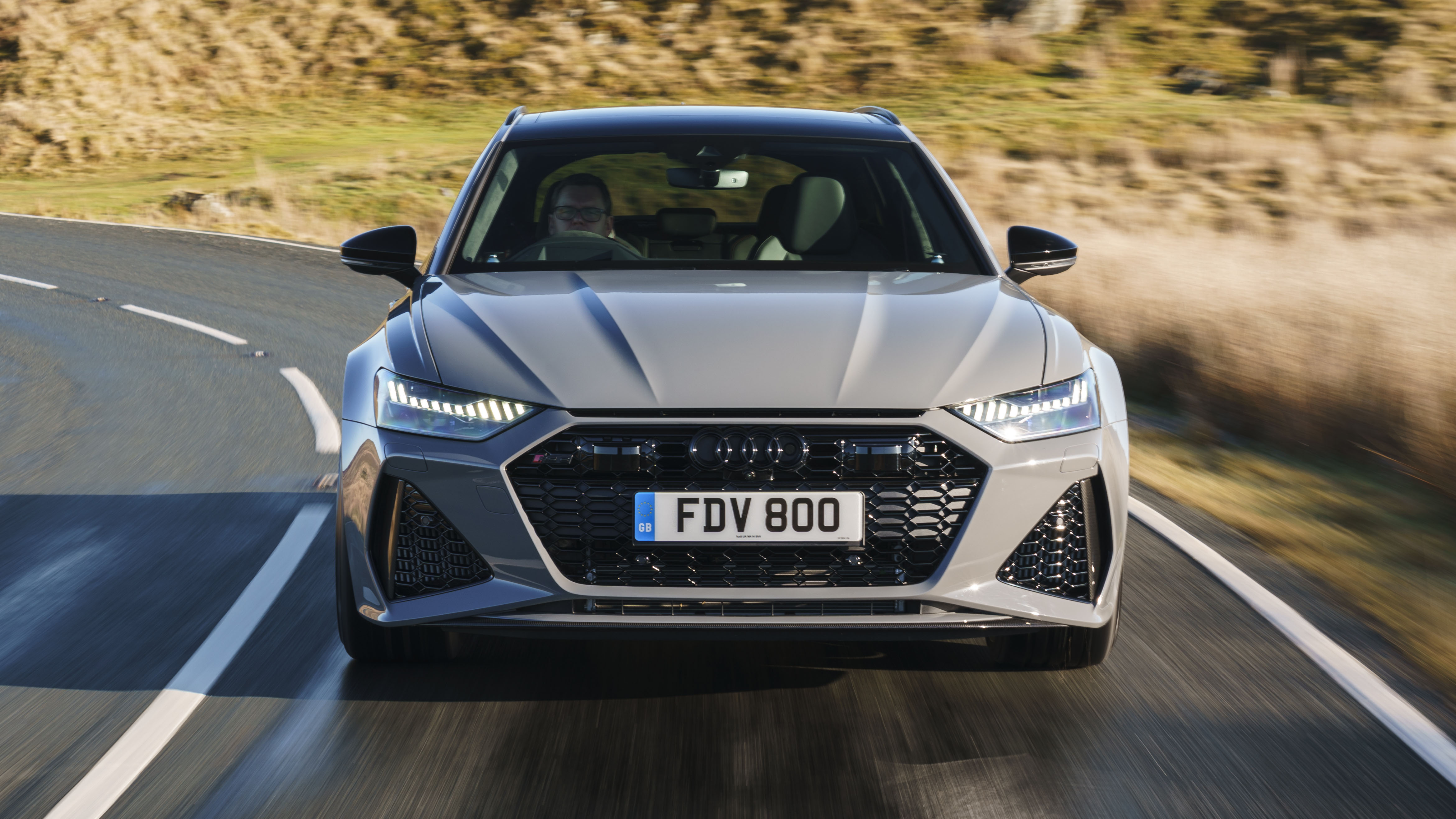 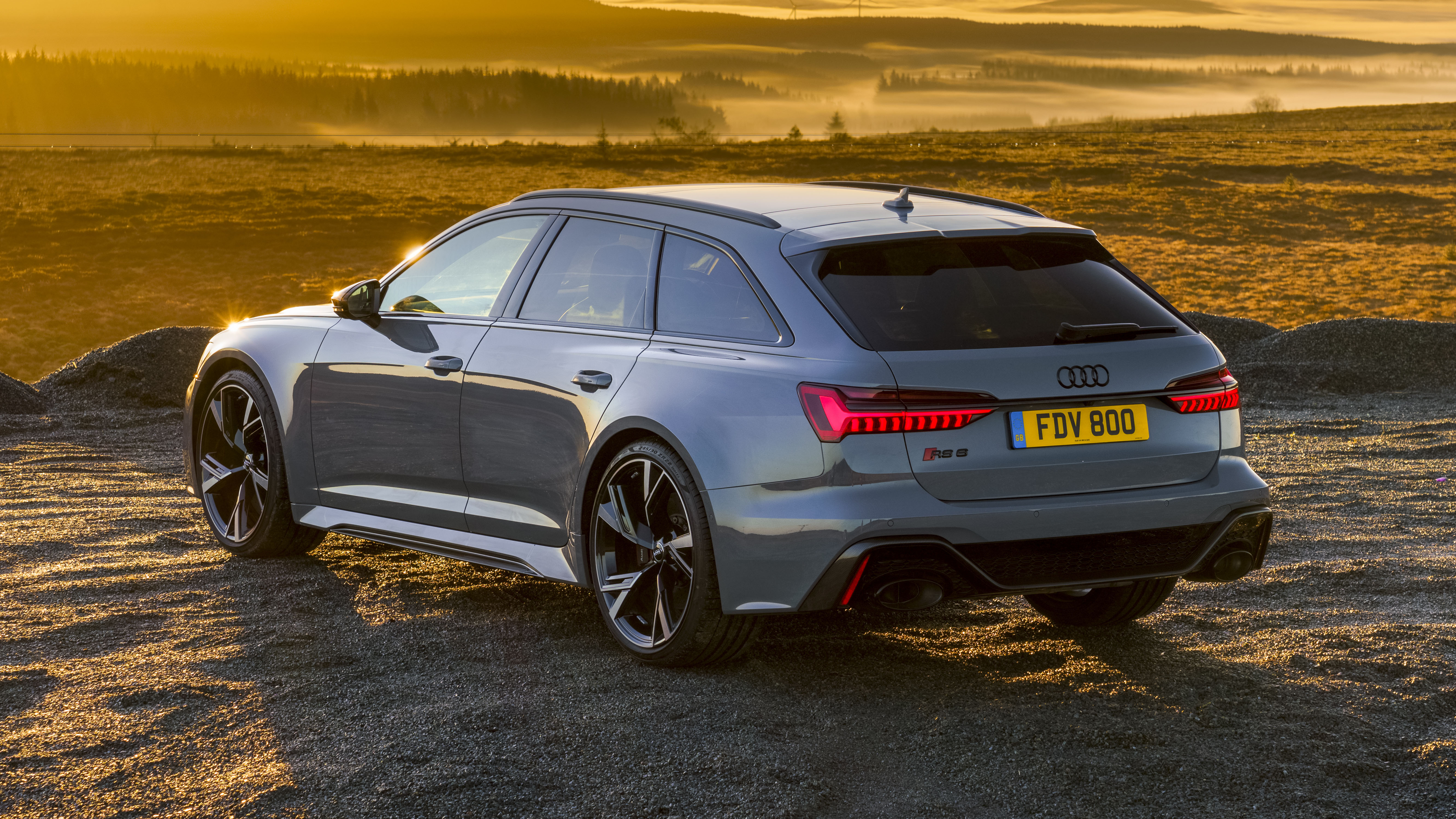 The new Audi RS6 has landed in the UK then?

Yes, all 2,075kg of it. So less a deft touchdown, you might be thinking, than the sort of bellyflops we saw flights across the UK making during Storm Ciara over the weekend. Only no, the new RS6 mostly makes mincemeat of its hefty kerbweight.

Hang on, that’s a whopping 140kg heavier than its predecessor!

It’s heavier because it’s got a lot more tech in it, and that tech is mostly designed to reduce the feeling of weight. Sort of ironic. Just leave the tech out, you might be thinking.

Not that easy in this day and age. And besides, I’m over-simplifying for effect. Looking through the facts and stats I still can’t quite explain where the weight has come from. 4WS can’t add that much. But it does make a big difference to the way the RS6 drives. Not only does the car feel downright nimble, it’s also helped reduce understeer and the RS6’s historical tendency to feel and act quite nose-heavy. Both 4WS and a sport differential (40:60 power split normally, but able to send up to 85 per cent of torque to the back axle) are standard on UK cars.

Aren’t you forgetting that it’s hybrid? That must add some weight…

Read the small print. It has a 48 volt mild-hybrid system that recuperates braking energy and stores it in a 10Ah battery under the boot floor. That’s used to run some of the on-board electrical systems, but it does not power the car. It permits cylinder shut-off under low loads, coasting at speed and start/stop below 13mph. Think fuel saver, not power provider.

Does it save fuel?

A bit. Audi claims the mild-hybrid reduces consumption by 0.8 litres every 100km. Over 550 miles of trans-European motorway cruising it averaged 23.6mpg, which ain’t great, but is a couple of mpg better than we got from a last gen RS6 we ran for several months back in 2014.

Talk me through the power then.

Broadly speaking it uses the same 4.0-litre twin turbo V8 as the old C7 generation car (this one is C8, obviously), but the turbos are bigger and blow a little harder (at 1.4bar instead of 1.2). That’s increased power and torque by seven and 14 per cent respectively, for nice round totals of 600PS and 800Nm – 592bhp and 590lb ft in old speak.

At 3.6secs, 0-62mph comes up three-tenths faster (although when we tested it the old car consistently hit 60mph in 3.3 and 3.4secs, so we’re expecting similar improvements on that here as well). Top speed is limited to 155mph unless you upgrade to either a Launch Edition or fully kitted-out Vorsprung model. Then it’s 174mph and, if you add carbon ceramic brakes, you’re allowed a 189mph top end.

How is it in the UK?

The word you need to get familiar with is bandwidth. The new RS6 has a lot of it. Audi has pushed hard at one particular end of the air suspension envelope – it’s made the RS6 ride well. Quietly. Calmly. Capably. Smoothly. Yep, even in the UK. And on 22s. It’s not buzzy or harsh like an E63, but surprisingly mellow. As quiet and content as a regular A6 Avant.

Then you can stiffen it up via the Drive Select control or the RS button on the steering wheel (plagiarised from BMW) and it’s much tighter and stiffer. But still feels well damped. It’s not perfect, there’s a bit of vertical pop on rough roads (but the M5 suffers the same way as well), while an ounce of squidge in the suspension just robs you of the last vestige of confidence and accuracy. But you can get that back.

Right, here’s the one important decision you need to make if you’re serious about an RS6. Do you want it to just look effing cool and go hard, but be comfortable? Or do you actually want more focus? If it’s the latter, spec the Dynamic Ride Control. It’s about £1,300. This replaces the air suspension with conventional spring/damper units, hydraulically cross-linked (like in McLaren’s 720S). No matter which suspension you spec, Audi doesn’t have the active anti-roll bars that often go hand-in-hand with a 48v system.

The DRC still has variable dampers, and the ride when you back them off is very good, but in any mode you’re aware of the car giving you more information, being a bit crisper underneath you. If it was me, I’d have them. And maybe take a punt on the carbon ceramic brakes that save a total of 34kg from the unsprung weight. I didn’t try those – apparently they’re a bit tricky in town, dead initially, then grabby. But that much weight loss can only improve the dynamics on rough roads.

That said, the standard brakes feature 10 piston calipers grabbing at 420mm steel composite discs at the front (370mm at the rear), so they’re not exactly lacking in power, just a fraction spongy underfoot.

How about the steering?

There’s not much feel. Plus I found it a bit light even when ratcheted up. It is very accurate though, and gives you good confidence because the rack responds as you expect. The same applies to the throttle. And the (standard) brakes. There’s a consistency to the RS6 that reminds me of a Porsche 911. The controls work as you expect, so it’s an easy car to operate smoothly. This alone makes it swift, before you’ve unleashed the full force of 600bhp at the composed suspension.

It’s a very well calibrated car. It feels neither over- nor under-powered. Just well-honed and consistent. It’s not as overt and angry as an E63, but your family will be much happier joining you. It’s terrifically fast, but has the know-how to keep on top of itself. The AMG is a wilder ride – and if push came to shove I reckon both it and the M5 are marginally faster in a straight line. Last year we timed an M5 to 60mph in 2.99secs…

Audi’s twin turbo V8 isn’t quite as punchy and instantly responsive as BMW’s, and doesn’t sound as good as Merc’s – not least because new regs have limited what car companies can do with exhaust noise. The RS6 sounds good and meaty, but if you want the full bat-out-of-hell vibe, you’ll need to start down the tuning route (Abt has already announced a 700bhp conversion).

I know, and I’m not about to try to justify such a significant increase aside from pointing out it’s no more expensive than its rivals. Just watch the options. Audi has a habit of equipping its cars slightly less well as standard, then charging slightly more heavily for options. The best bet – one 40 per cent of UK buyers are expected to go with – is to opt for the £109,250 Vorsprung edition which supplies you with every option (although you can delete DRC if you want your RS6 slightly mellower).

Another 30 per cent of buyers will have the £100,650 Carbon Black model, the final 30 either the standard car or one of the 110-strong Launch Edition models. At the time of writing there were 41 of those left.

Does it look as good as I think?

Absolutely. It’s 80mm wider than a regular A6 Avant (the same fattening regime BMW put the M3 through), and rides 20mm lower. The front doors, roof and tailgate are the only panels they share. Contrast this with the BMW M5, which is way too close to a standard 5 Series, and can only be had as an infinitely less cool saloon.

Cabin’s good too – provided you can get on with touchscreens. They’re pretty easy to navigate, while the dash presents important information clearly without being overly busy. Look, it’s as easy to live with as it is to drive. The boot’s big enough (565 litres expanding to 1,680), there’s roof rails if you want to further ruin fuel economy and this time you can add a towbar to any version. And you should. Then claim it evens up the weight distribution.

It works in the UK then?

There’s not another super-estate that demands less of you or makes speed more accessible. It’s a brilliantly well judged and calibrated car. Not cheap, arguably not as exciting as a Merc-AMG E63 S, but really, deeply, truly satisfying.