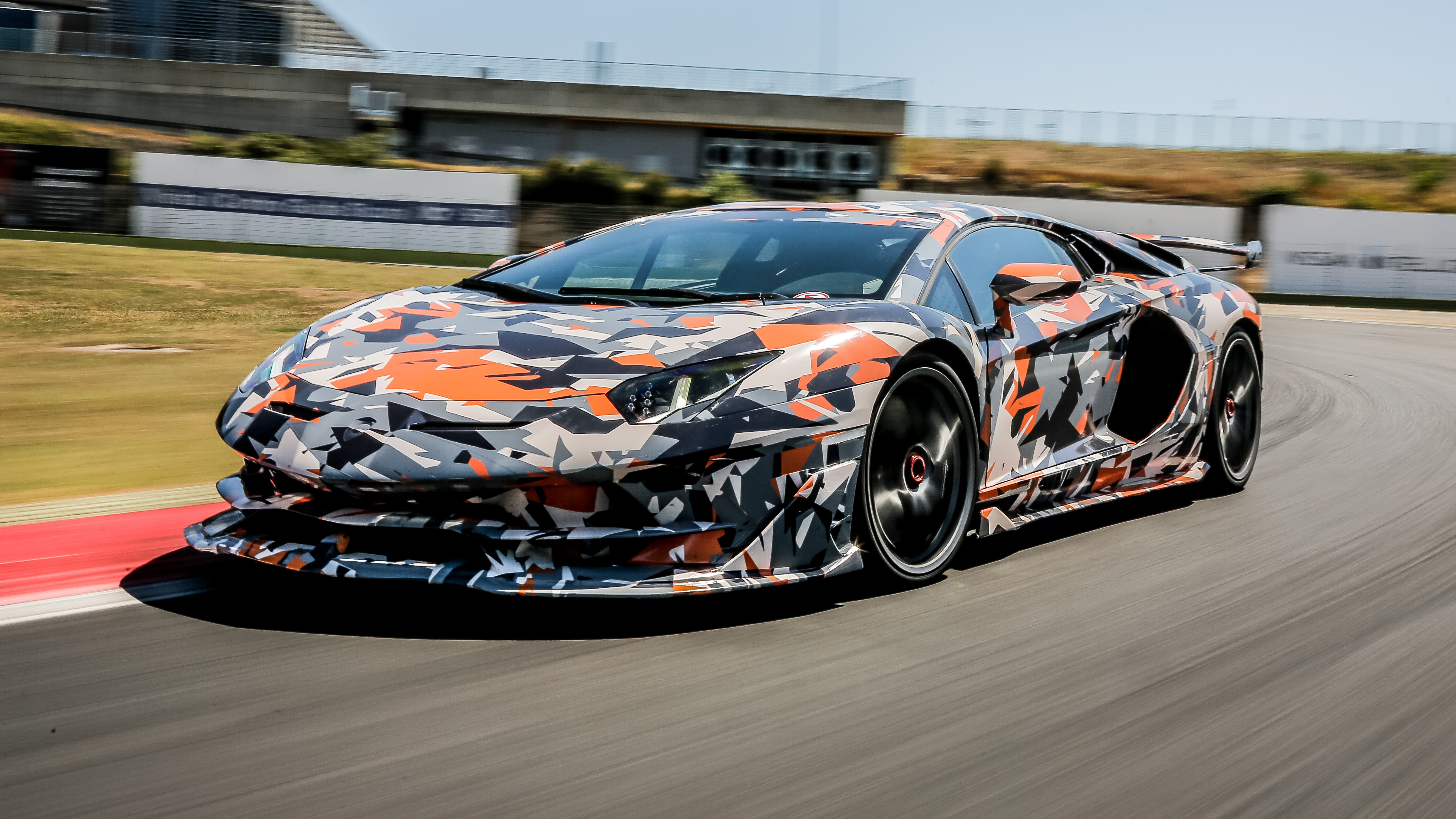 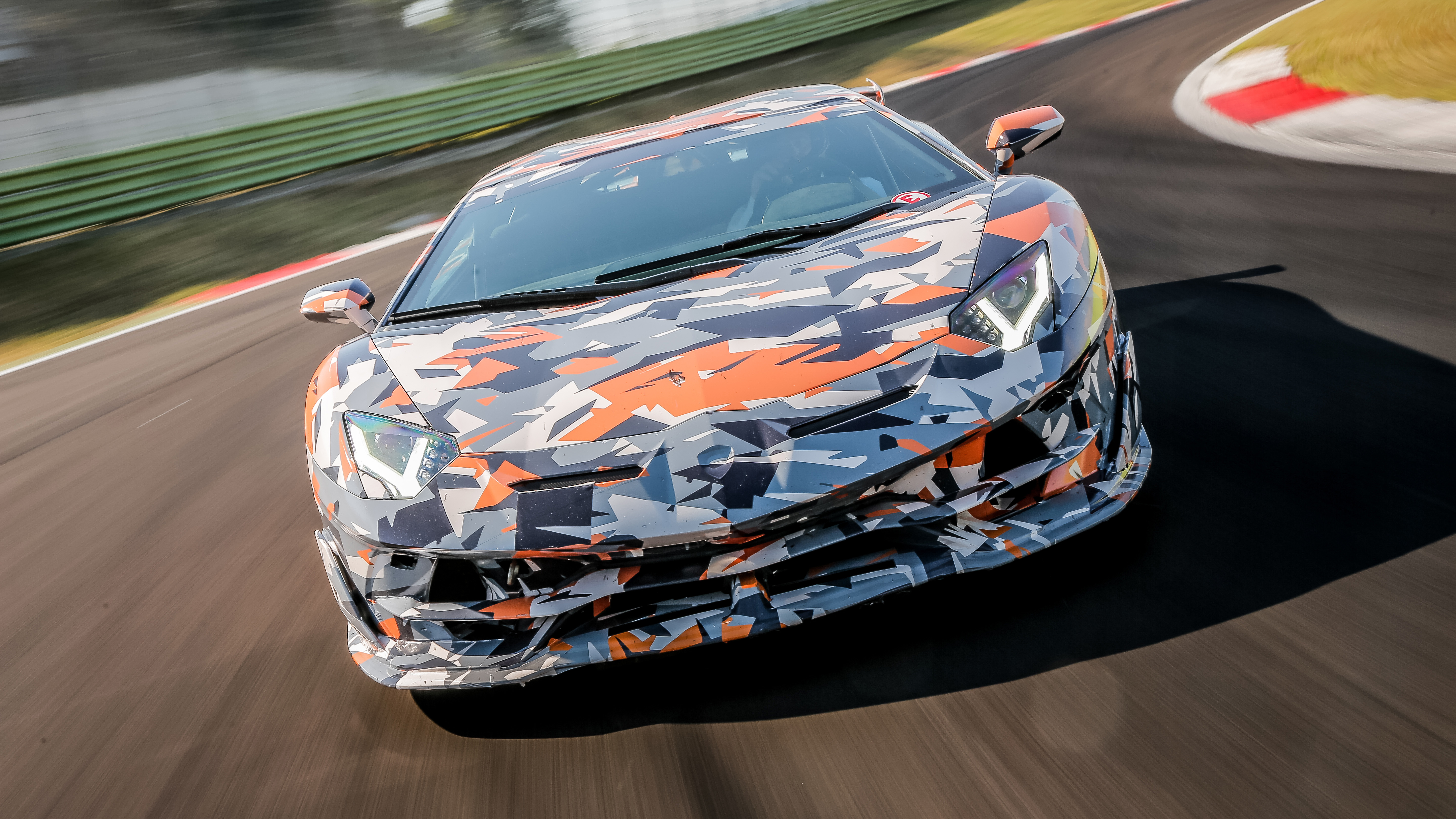 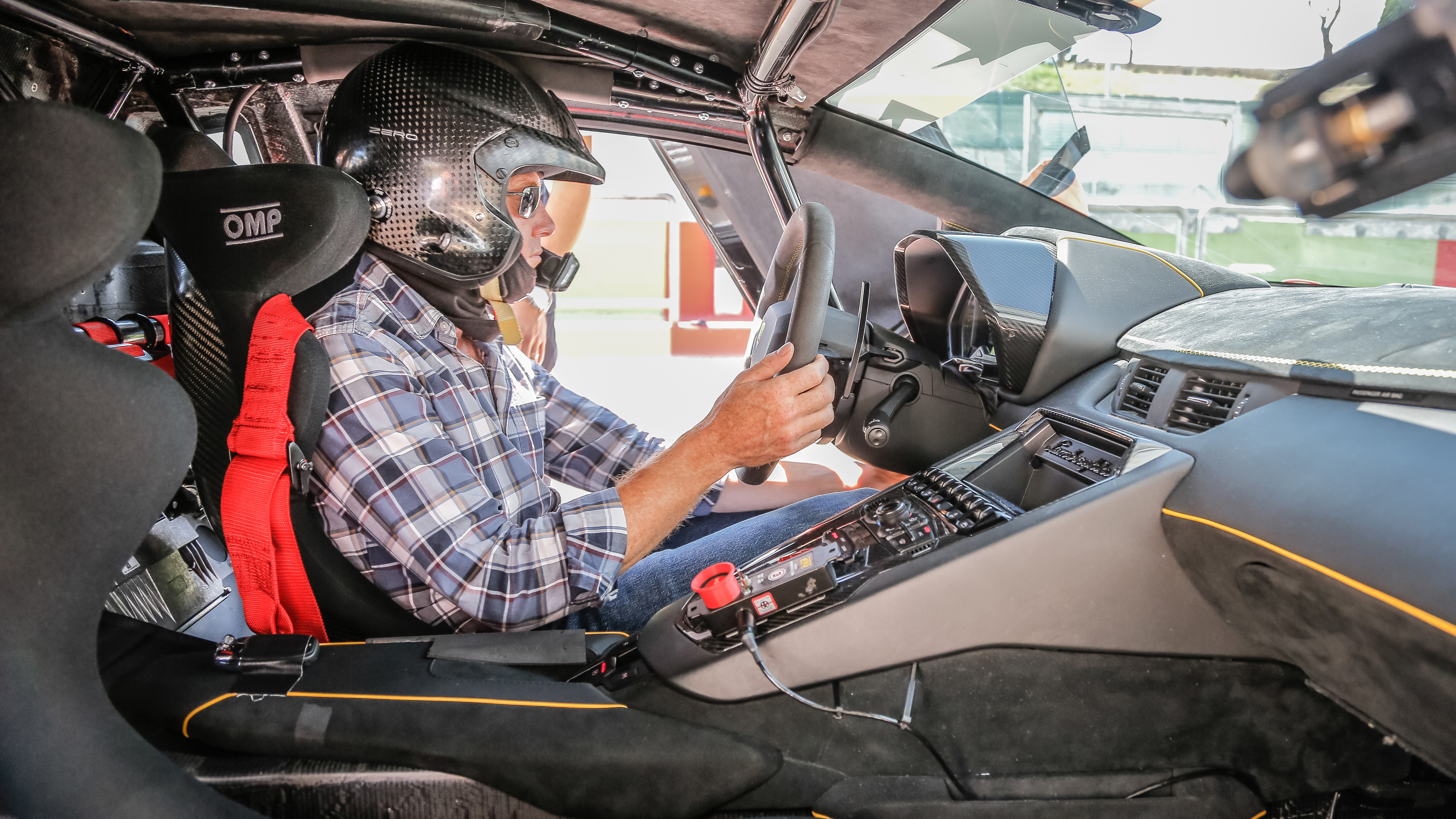 Hang on, isn’t that the car I’ve just seen doing startling speeds around the Nürburgring?

The exact one. And still equipped with the same rollcage and carbon bucket seat that Marco Mapelli used while hammering the Green Hell into submission in 6m 44.97s. And now I’m driving it at Vallelunga circuit near Rome.

Lucky you. Why’s it still disguised?

Because Lambo isn’t pulling the wraps off it until late August when it will be officially unveiled at Pebble Beach in California. Until then it stays clad in this explosion of origami offcuts. Which, come to think of it, might be exactly what it looks like when the camo is removed.

The bodywork underneath is correct though. Mostly the Aventador we know and love, but with many aero adjustments and a removeable, rather than hinged, bonnet. Weight saving.

Right then, what turns an SV into an SVJ?

Well, you take an SV, you apply the learning of the Huracán Performante (ALA adaptive aero, four wheel steering) and then turn it up to eleven. More power, tougher suspension, more downforce – you know the score.

But actually there’s more to it than that – and it mostly stems from the downforce. We’re in the age of it now, as I’m sure you’ll have noticed. And because car companies are in the early learning stage, the gains are big. The J has 40 per cent more downforce than the SV, yet no more drag. One per cent less in fact.

Total downforce at VMax is around 490kg, split roughly 40:60 front to rear. And it’s that split that’s the difference. The SV’s aero split was 20:80, and when you tried to drive it fast, you noticed. Without the aero pressure on the front, the handling balance was off. It understeered relatively easily and when you got beyond the limits of the rear, it broke away fast. This is all respective, you understand. By any standards, the SV had a lot of grip – witness how fast Marco Mapelli made it go around the 'Ring. But also watch the film again to see just how busy it kept him...

Now, the aero split mimics the 43:57 weight distribution and that helps set-up. The extra downforce has also meant more fundamental changes: the tyre sidewalls have had to be stiffened, the hydraulic power steering has had to be retuned, the torque split adjusted and so on.

And do you notice?

Absolutely. Because handily Lambo laid on both SV and SVJ so I could drive them back to back. Actually what they did, in typical Lambo fashion, was send me out in the SVJ first chasing one of their racers in another SVJ, then stick someone else in ‘my’ SVJ and let me drive the SV around at the back to see if I could keep up.

No bloody way. Lambo was obviously keen to ensure the differences between the two were as noticeable as possible, so the SV rode on Pirelli P Zero Corsa tyres, the SVJ on track-ready Trofeo Rs. Hardly a fair comparison. Especially when the air temperature was nudging 40 degrees and the track temp hit 62...

Anyway, leaving aside that difference and my resulting frustration at watching the SVJs pull away and then massively over-driving the SV in a bid to keep them in sight, some thoughts.

As far as speed goes, there’s not much in it. The Jota features new titanium intake valves and ducts, new intake runners, and a new exhaust with reduced backpressure. Power is up 20bhp to 760bhp at 8,500rpm, torque climbs 22lb ft to 531lb ft at 6,750rpm. That’s 1,250rpm higher than before, but when you look at the graph you’ll see there are gains from 2,500rpm onwards and the new engine actually develops more torque from 4,750-7,500rpm than the old one managed at peak.

On Vallelunga’s main straight this translated into a 5mph higher max at somewhere around the 153mph mark. But with head in helmet the experience of both engines was broadly the same: distant shrieking, large speeds appearing. That said, the SVJ had markedly sharper throttle response and better low end punch.

What about cornering speeds?

You’re one step ahead of me. After the main straight, there’s a blind, crested left kink, then a fast, fast fifth gear right. The quickest corner on the track. It wasn’t just that the SVJ was 10mph faster at the apex, it was the confidence I had in the car. That’s the single biggest change.

I’ve never driven a Lamborghini with a better front end than the SVJ. This is still not a light car (at 1,525kg dry it’s roughly the same weight as the SV), but the way it turns into high speed corners – not just the grip from the Trofeos, but the feel you get from it, the sense of balance and trust – is new. It turns in properly, the steering is more together, so you don’t find yourself sawing at the wheel. Now much of this could be down to the tyres, but the balance between the axles is so much better.

And then there’s the two biggest changes: four-wheel-steer and ALA v2.0. The former aids high speed stability by turning front and rear axles the same way at high speed, and agility at low speed by making them oppose each other. You don’t feel it directly, but after a while I noticed I was using less lock in the Jota and it wasn’t just because I was battling understeer out of slow corners.

And what about ALA?

It’s now at both ends. There are two slats on the upper surface above the front splitter that are opened and closed by a motor. Closed for maximum downforce, open to disrupt airflow. Same principle at the rear, which now has one giant air intake and two motors, one for either side of the wing. When opened together they reduce drag and downforce, but they also have the ability, as in the Huracán, to operate individually on either side. In other words, maintain downforce on one side, bleed it off on the other, as you might want to to keep pressure on the inside wheel through a corner.

Lambo claims this aero vectoring improves the inner wheel load by 30 per cent. Against what I’m not sure. But it’s all part of the same thing. As with the McLaren Senna I drove recently, the aim is to integrate aero into the car’s dynamic package. And the underbody aero (30 per cent of the total), works best when the body is as consistently level as possible. So the anti-roll bars are now 50 per cent stiffer, the damper rates are up 15 per cent.

It doesn’t produce Senna levels of downforce, does it?

No, this isn’t as specialised as Woking’s 800kg-of-downforce-at-155mph hypercar, but like that the Senna, the Jota (490kg-at-VMax, or around 320kg-at-186mph) now has a dynamic package that can cope with the power its motor is producing – and there’s no doubt this has a far more charismatic powerplant. And will also be far cheaper. No word on what it will cost yet or what the build numbers will be, but perhaps surprisingly this is not a limited production run car.

Does it still have the single-clutch sequential manual gearbox?

Yes it does, and no, it’s still not much good. It is faster, but there’s still time for a good head-nod during upshifts, if not the full whiplash experience. This is the one element of the SVJ’s ability that lets it down, but in a way the fact you have to think about when and where you’re going to pull a paddle so you don’t upset the car’s balance as you’re accelerating out of a corner, does make it more of a challenge.

Oh, one other drawback, too. The SVJ is going to be fitted with the same seats as the SV. They’re hopeless: unpadded carbon buckets that are upright, unsupportive and uncomfortable. They need an upgrade. The chair in the lap record car was way better.

Where was it at its best at Vallelunga?

Turn 1 probably. It’s a properly ballsy, deep-breath-before-turn-in corner and yet I soon learned to relax because I could tell what the Jota was up to. All the components work together in a way they don’t on the standard SV. The brakes were more reassuring in the approach, the steering instantly connected, the way it rode the bumps and instantly regained composure gave me confidence.

That word again. It’s the word I most associate with the 20 or so laps I did in the Jota. The Aventador has long been the most super of supercars partly because it’s a challenge to drive fast, it’s a bit hairy-scary. It hasn’t lost that fury, it hasn’t totally eradicated the threat of misbehaviour, I’d never describe it as playful or say it now dances around a circuit, but it has discovered a level of control, composure and confidence I’ve never seen before in a Lamborghini.