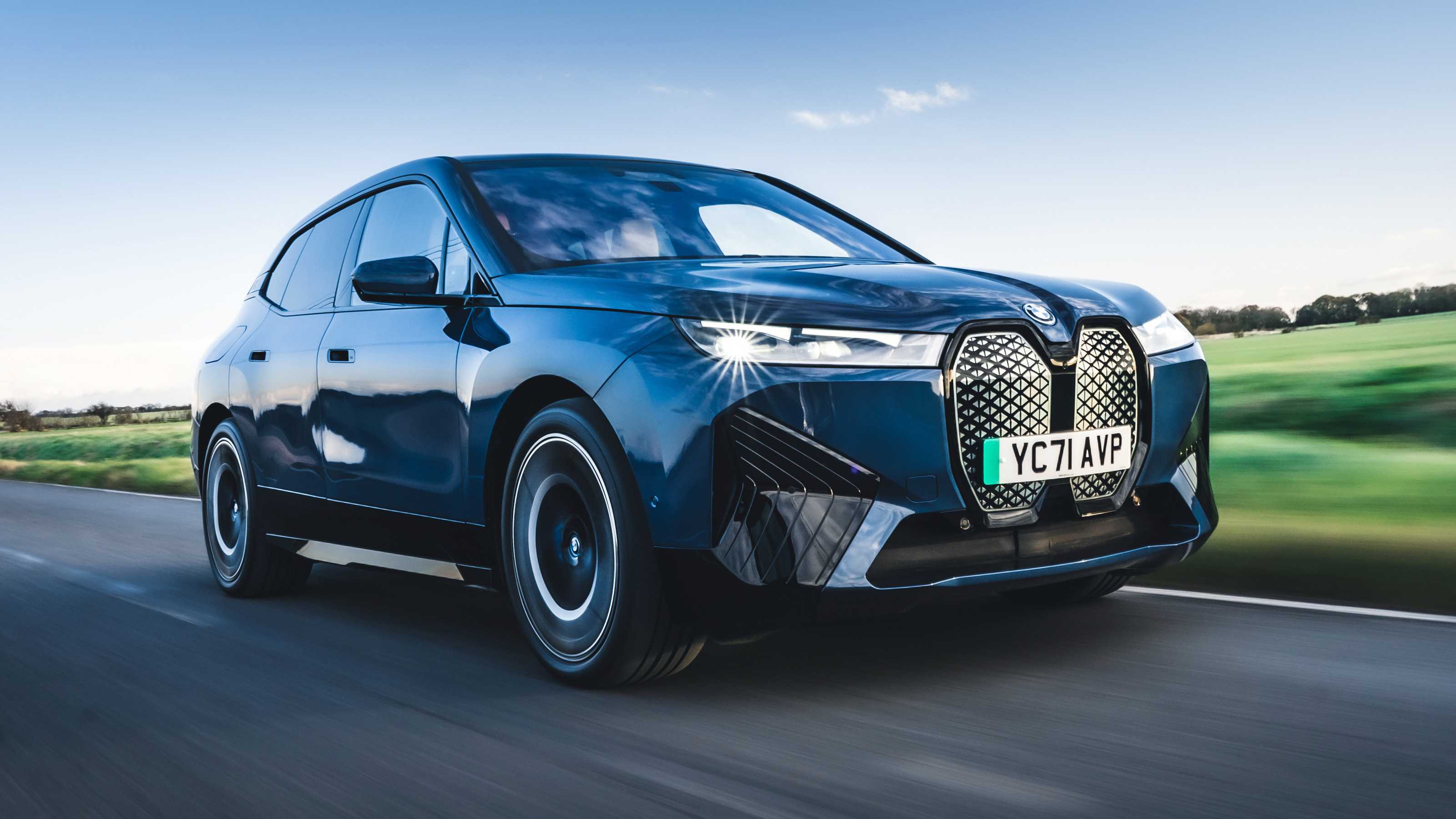 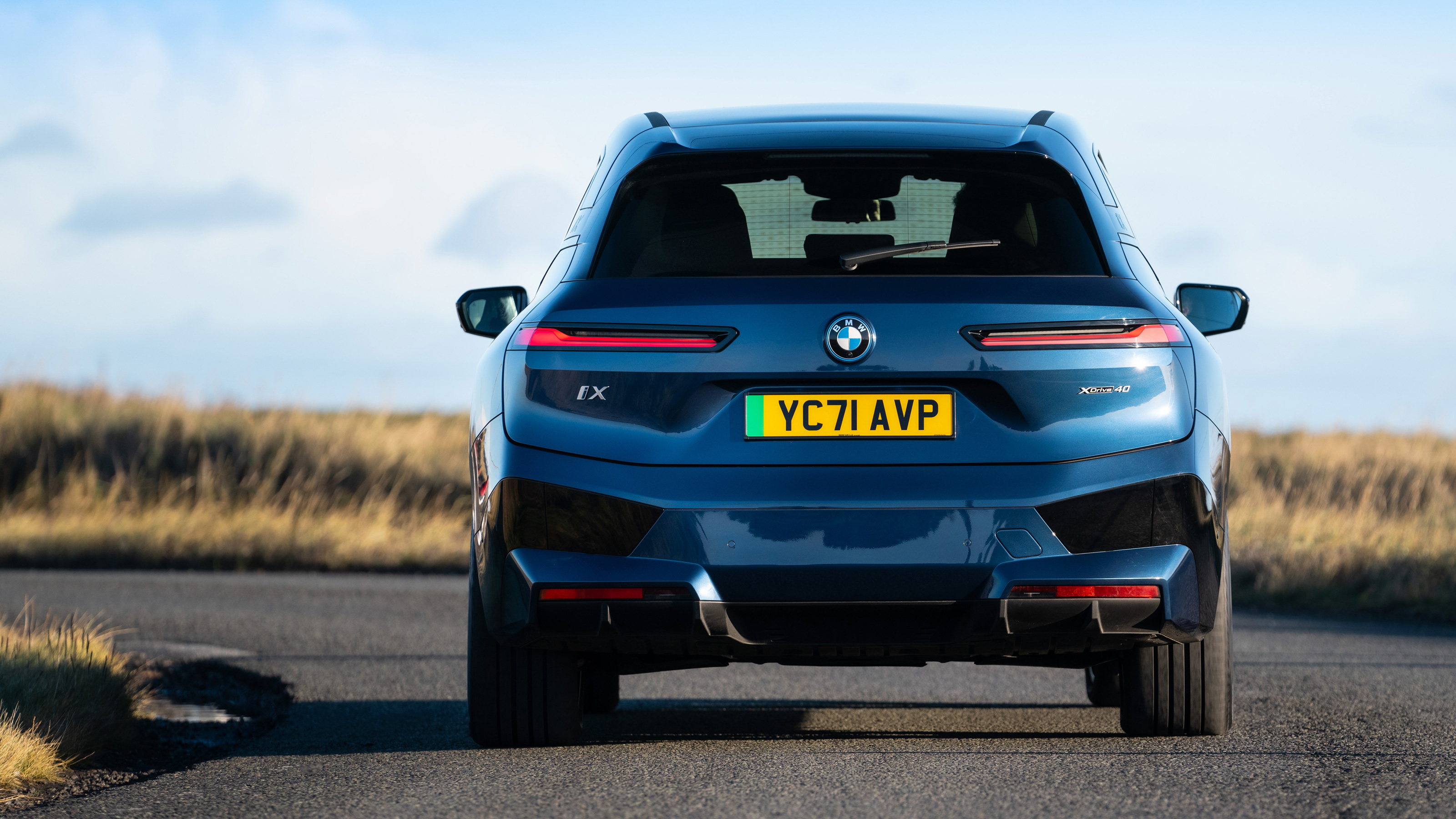 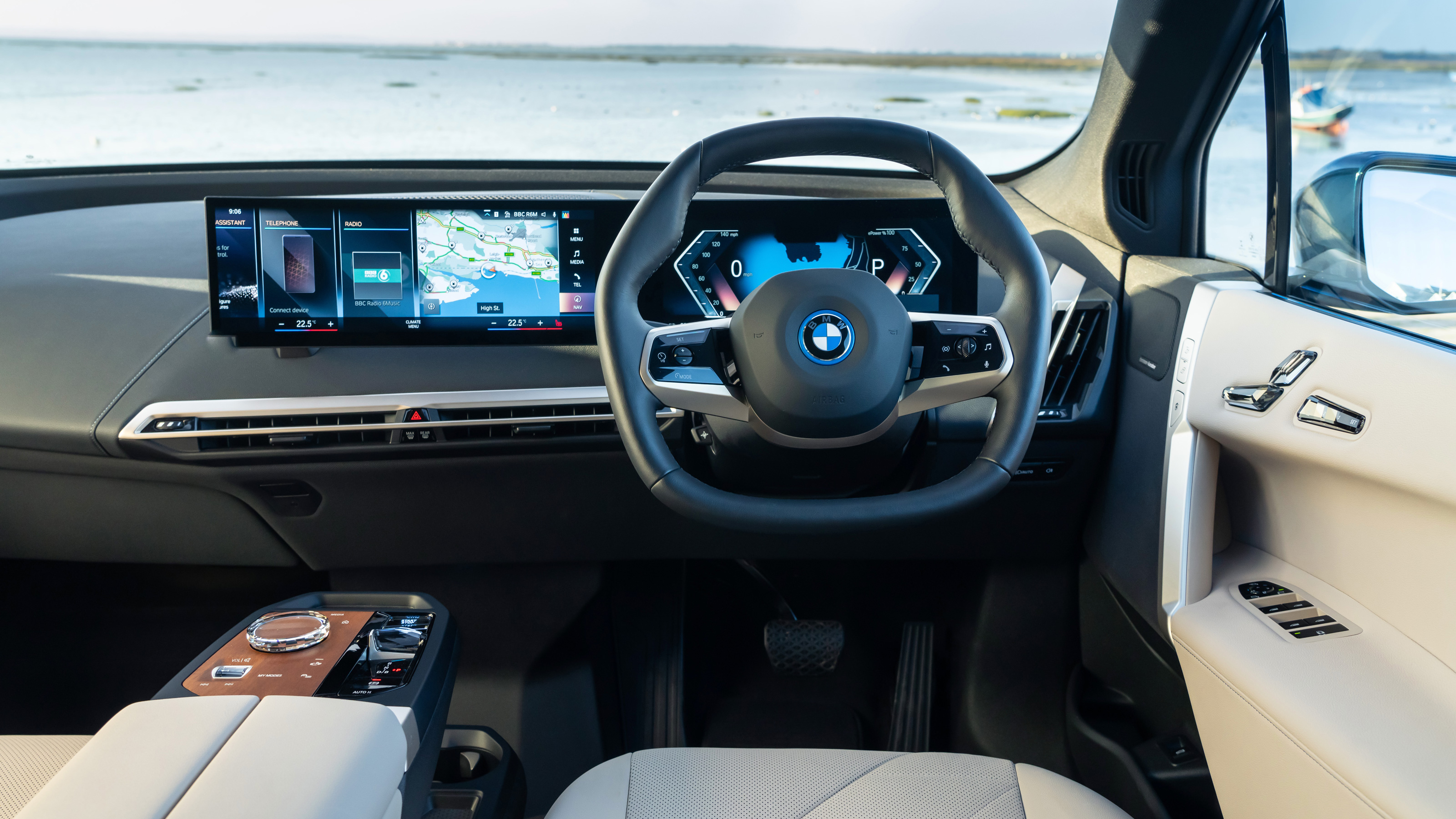 We’ve driven both versions currently on sale in the UK. Let’s deal with the faster one first: the iX xDrive 50 M Sport. It actually has the same motors and power electronics as the xDrive 40. But the bigger battery can simply kick out more current, so its motors can release the full 523bhp and 564lb ft. Air suspension and four-wheel-steering are also standard on the 50.

The performance does that typical EV thing – an instant and precise response to the throttle pedal. It's a characteristic we cherish in steering systems, yet we give a free pass to modern petrol powertrains that mostly have to come on boost and shift down and finally surge ahead. EVs just go.

On top of that the iX 50 just goes sodding forcefully. Okay, it's not the near-painful full-bore of a Ludicrous Tesla or Turbo Taycan. But for swift corner exits or snappy overtakes, the combination of power and pedal precision makes it quite some tool.

Traction of course is immense, but not so much that it can't be overcome on a tightish corner even in the dry. Whereupon the traction control and front-rear torque vectoring dexterously keep you proceeding in exactly the direction you're steering.

And how’s the smaller xDrive 40?

The problem for the 50 is that it’s not a sports SUV and so its performance is arguably a little too much for the manners of the car. The 40 (322bhp, 465lb ft) drives that bit more manageably and progressively simply because it doesn’t punch forward quite as aggressively. Still 0-62mph in 6.1secs is more than enough. It’s also £20k cheaper – which we’ll discuss further in the Buying section.

IS IT FUN TO DRIVE?

The steering itself is surprisingly quick, presumably to make this behemoth feel agile. You soon get used to it. Less so the wheel rim, a lumpy-rimmed hexagonal thing, for no discernible reason other than the fact this is an interior design that shuns all curves. Anyway, cornering, like the accelerating and braking, is accurate. But it doesn't have much feedback. It's a car you direct, rather than engage with.

The ride is flat and well-controlled, and reasonably supple with it. All that carbonfibre in the bodyshell gives it a terrific sense of strength and integrity. No shudders here. It’s a bulky thing to thread down B-roads, but in town the 4WD and copious cameras and even automatic manoeuvring systems do their best to avoid parking scrapes.

It's also extremely quiet. You can call up a synthesised sound that varies in pitch, tone and volume according to accelerator position and speed. That cue does help judge your approach to corners actually. But mostly you'll be cruising with it turned off, in eerie silence. Just your choice of music.

HOW'S THE RANGE AND CHARGING?

You have 374 miles of WLTP range. I got 310, and I was clattering along, and using the air-con. Range varies impressively little as your steady speeds rise. For instance, rising from 70mph to 80mph cut only about 50 miles' range off. Other EVs lose proportionally more. (Okay, at the limited max of 125mph on the Autobahn it was using nearly 1kWh every mile. Keep that up and the battery's gone in less than an hour, but where can you do 125mph for an hour? Not even Germany.)

Also, range shouldn't collapse with falling temperatures. In those circumstances heat is recovered from the motors and electronics and used to warm the battery and people. Charging is quick if you are attached to the right gear. For DC rapid stops, the iX 40 will ingest DC at 150kW – or 60 miles in a 10-minute pitstop. The iX 50 can take nearly 200kW, which is 90 miles in 10 minutes. It's just over half an hour for both of them from 10 to 80 per cent. If the charger is set as your nav destination, the car gets the battery to its ideal temperature for max charge power just as you arrive there. But on the more common 50kW posts you could be there for two hours in the xDrive50.

All iXs have three-phase 11kW on-board AC chargers, but few of us have three-phase at home so we'd be limited to single-phase 7kW. That means about 14 hours for the big-battery car to get from dead flat to 100 per cent. So you'd probably plug in well before zero.