£126,750 when new
Read why you can trust our independent reviews 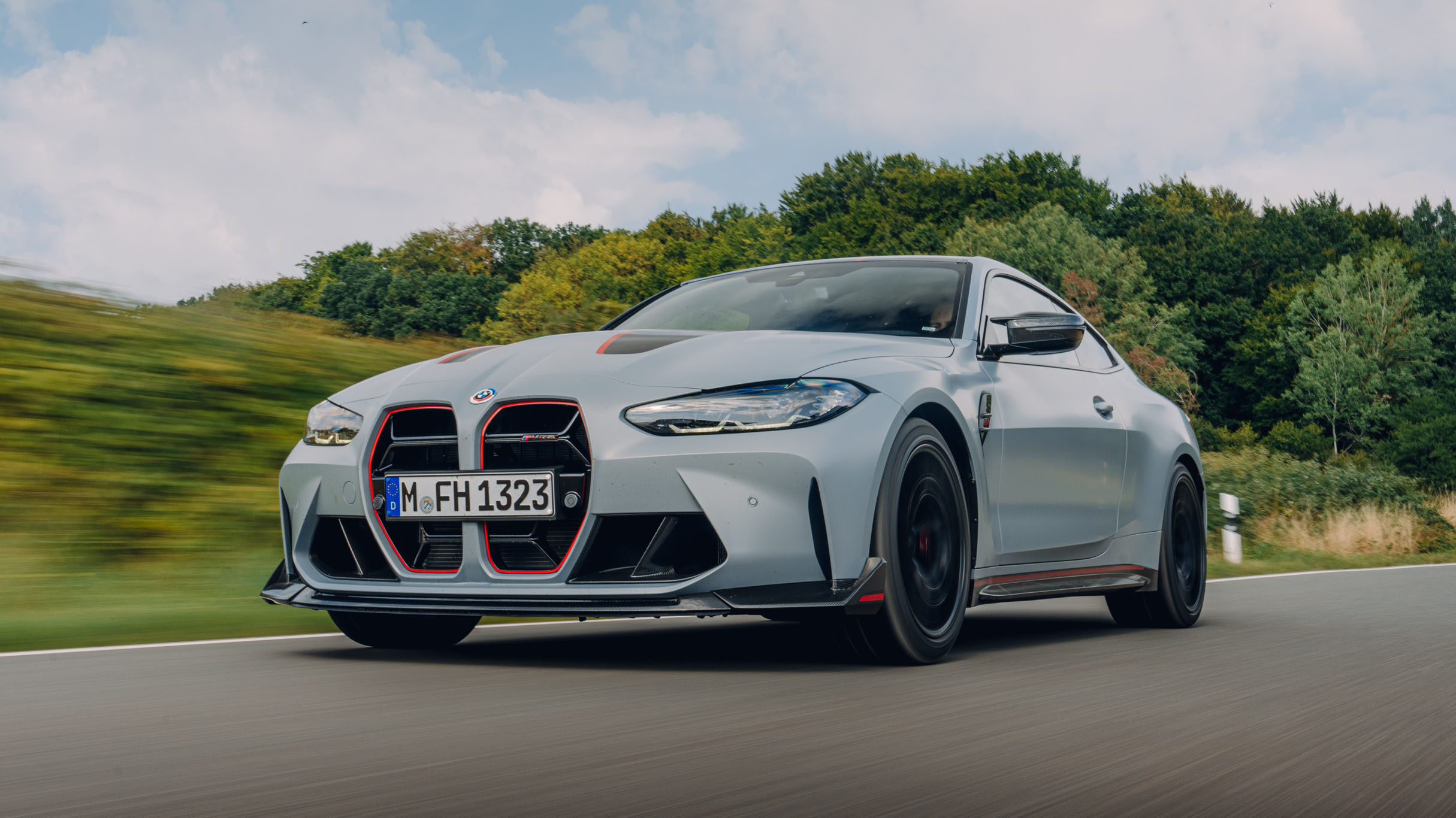 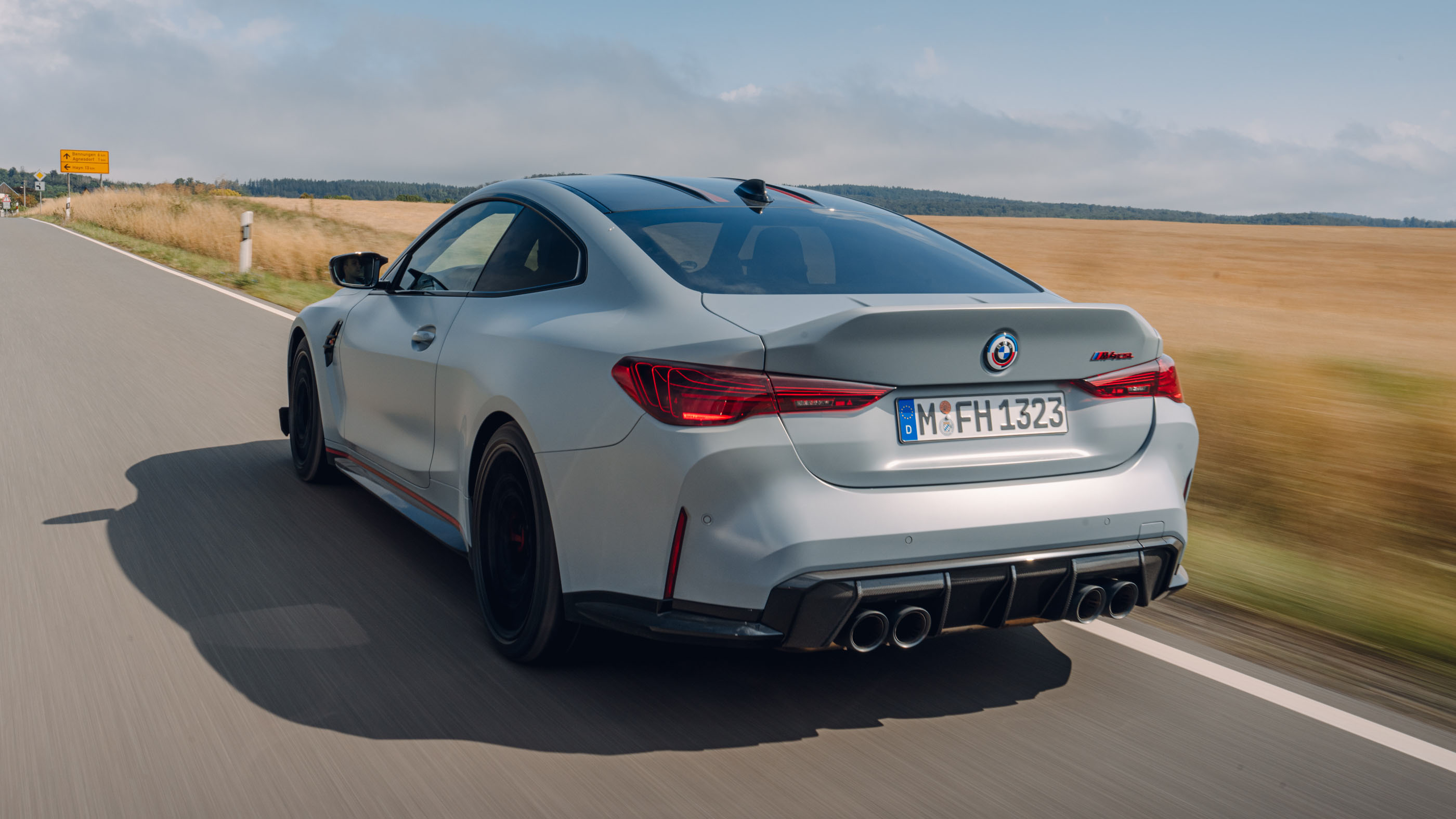 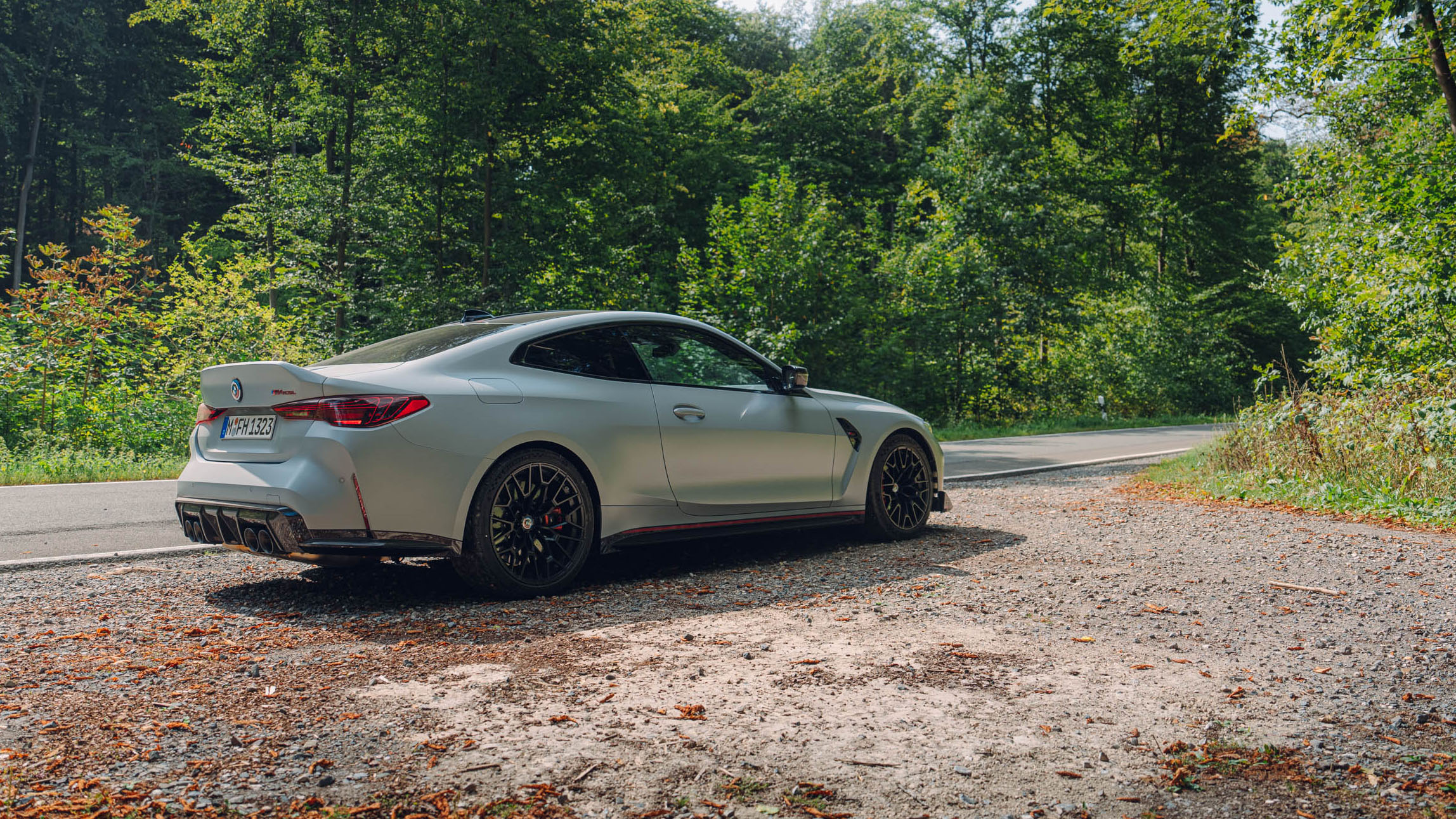 ‘BMW CSL’. Collections of letters rarely get more evocative than that, right?

This isn’t just a top-of-the-range BMW. The company has only used ‘CSL’ – which now stands for Competition, Sport, Lightweight – three times in its entire history.

The 1973 CSL’ Batmobile’ ignited the legend. A championship-winning homologation icon, it is to BMWs what the 250 GTO is to Ferrari, what the 911 2.7 RS is to Porsche. It’s the touchstone: the source of the mystique.

In 2003, BMW built what many – including Top Gear – believe is the greatest M car of all time: the E46 M3 CSL. Shorn of back seats, slammed onto its threadbare tyres and complete with a cardboard boot floor it was BMW at its most raw and pure, barking through a carbon fibre airbox.

‘CSL’ only comes out for very special occasions then?

That’s why the CSL badge matters. It’s reserved for deeply special cars. The last few hardcore M cars haven’t been deemed worthy – BMW swerved the issue and christened them ‘GTS’ instead. They were trick in their own way: bored-out engines, roll cages and wings – the most extreme M4 even had a water-injection system to keep the turbos cool.

But now, BMW says the time is right for the successor to the CSL dynasty. A road car, not a track car like the recent GTS models: this is supposed to be less about lap times, and more about thrills. A 50th anniversary birthday present to the M Division, and potentially a last hurrah for the M car as we know it, before electrification invades for good.

I sense there’s a ‘but’ coming.

More of a ‘however’, actually. See, the new M4 CSL’s numbers aren’t especially promising. Yes, it has more power: uplifts in boost pressure and some software tweaks promote the 3.0-litre twin-turbo straight-six from the M4 Competition’s 503bhp to 542bhp, with 479lb ft of torque. Not huge leaps, but that’s fine – a CSL should be about far more than sledgehammer oomph.

It’s the weight. BMW has stripped 100kg out of the M4. Sure, that’s tricky to achieve with a modern car that’s festooned with safety devices and embedded technology that can’t simply be ripped free, unless you want a dashboard of warning lights that looks like a Coldplay stadium gig.

We’ll get into exactly where and how weight has been saved in a moment, but the simple fact is this: at 1,625kg, the ‘lightweight’ love letter to BMW M folklore is 88kg heavier than the old, bog-standard M4 Coupe with the paddleshift gearbox. Fun fact: according to BMW’s official figures, the current 330i Touring weighs 25kg less than the CSL. 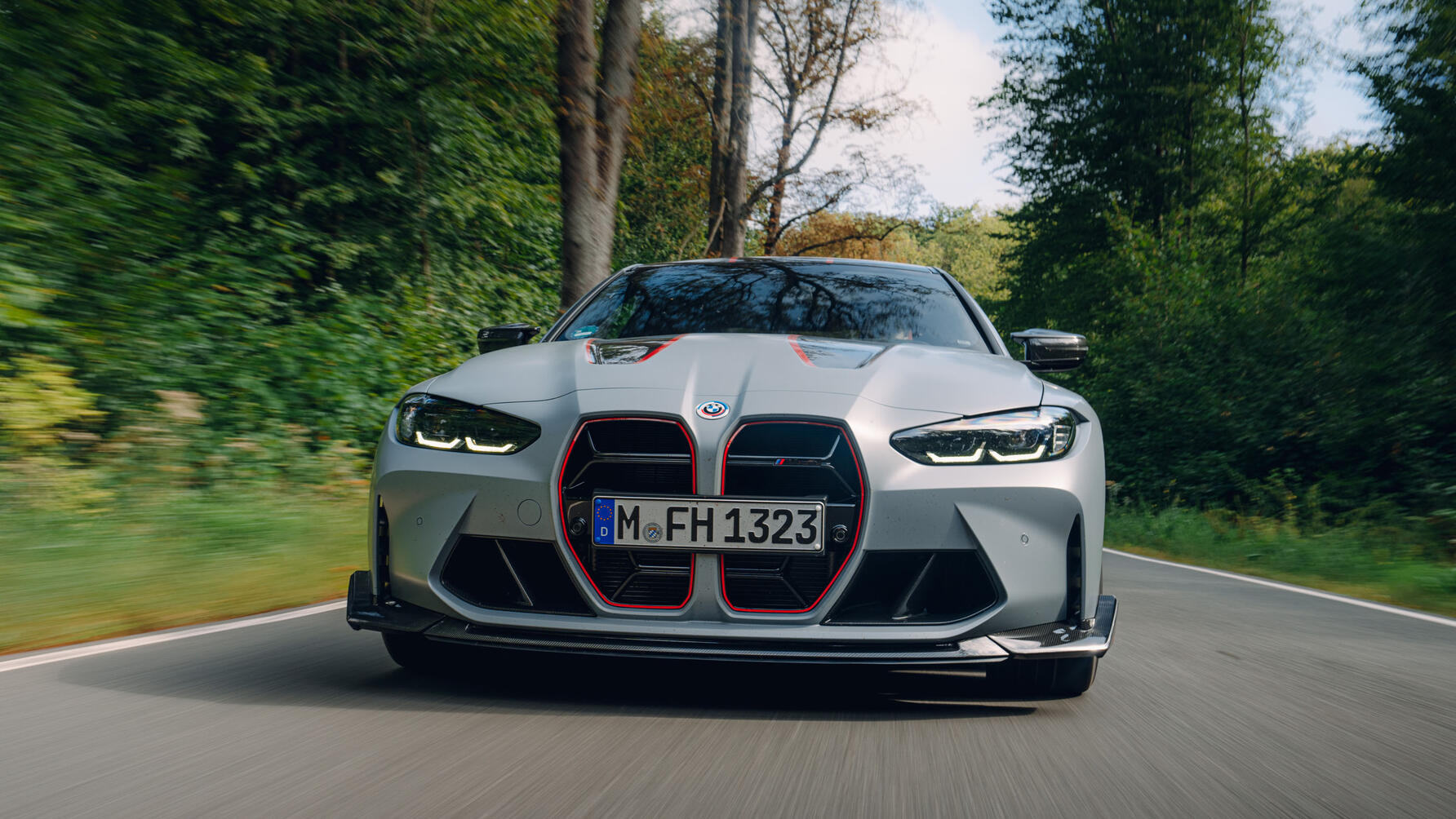 So while it’s got 15kg less soundproofing (so you hear all the grit pinging around the wheelarches) and you’re sat in a seat so uncompromising it probably counts as cruel and unusual punishment in the Geneva convention, the new CSL doesn’t feel like a lightweight. It doesn’t have the delicacy or response of a truly stripped-out road car. It feels like a big, burly bruiser.

An eyeful, isn’t it? That it has in common with the OG CSL, which was all flicks, stripes and a wing so big it was sold unassembled in the boot.

Its grandchild makes a bit of a hash of paying homage. The ducktail bootlid is a pleasing nod to the M3 CSL’s pert tail, and it’s carbon fibre too (saving 6.7kg) . So’s the bonnet ( -1.2kg) though it blows its own trumpet very loudly with those exposed carbon stripes.

In fact, most of the mods are quite gopping. There’s masses of red pinstriping and a family fun pack of CSL logos. Those engorged front nostrils appear to be propped open with the stents used by your dad to stop snoring. The rear laser lights are intricate (and save 400g), as are the forged wheels, but they’re like garnishing a piece of parsley atop a flame-grilled whopper.

What other weight-saving measures are there?

A titanium exhaust back-box drops 4.3kg, and uncorks a slightly harder-edged idle. You don’t notice a different noise once you’re underway, because the speakers are faking it. Ditched soundproofing sheds 15kg, while 21kg is lost courtesy of carbon-ceramic brakes (which never get cooked even when absorbing massive abuse on track) plus new suspension struts and the revised wheels.

You can’t have dual-zone climate control in a CSL. Or a head-up display. Or an armrest. These are frivolities sacrificed at the altar of Serious Weight Saving.

And yet, BMW has gone to the trouble of adding light-up badges to the fixed-back carbon bucket seats, which require an air ambulance and team of paramedics every time you want to climb out. These chairs alone cut 24kg over the usual M4 seats, while absent back seats save another 24kg, and are by a long way the most purposeful, tone-setting feature in the CSL.

Since it’s a CSL and not a GTS, it ought to be a stellar road car?

We spent many hours on the road. Some on autobahns, cruising at a steady 155mph with complete stability, the A/C blowing cold and a podcast on the hi-fi. All very civilised. In town, the utterly retuned suspension doesn’t make life intolerable. It’s only 8mm lower and though the Comfort, Sport and Sport Plus modes remain (suitably reworked for CSL duty with Sport being the optimum mode for fast Nürburgring laps) it’s not as starkly different from the standard M4 as, say a GT3 is from a standard 911. 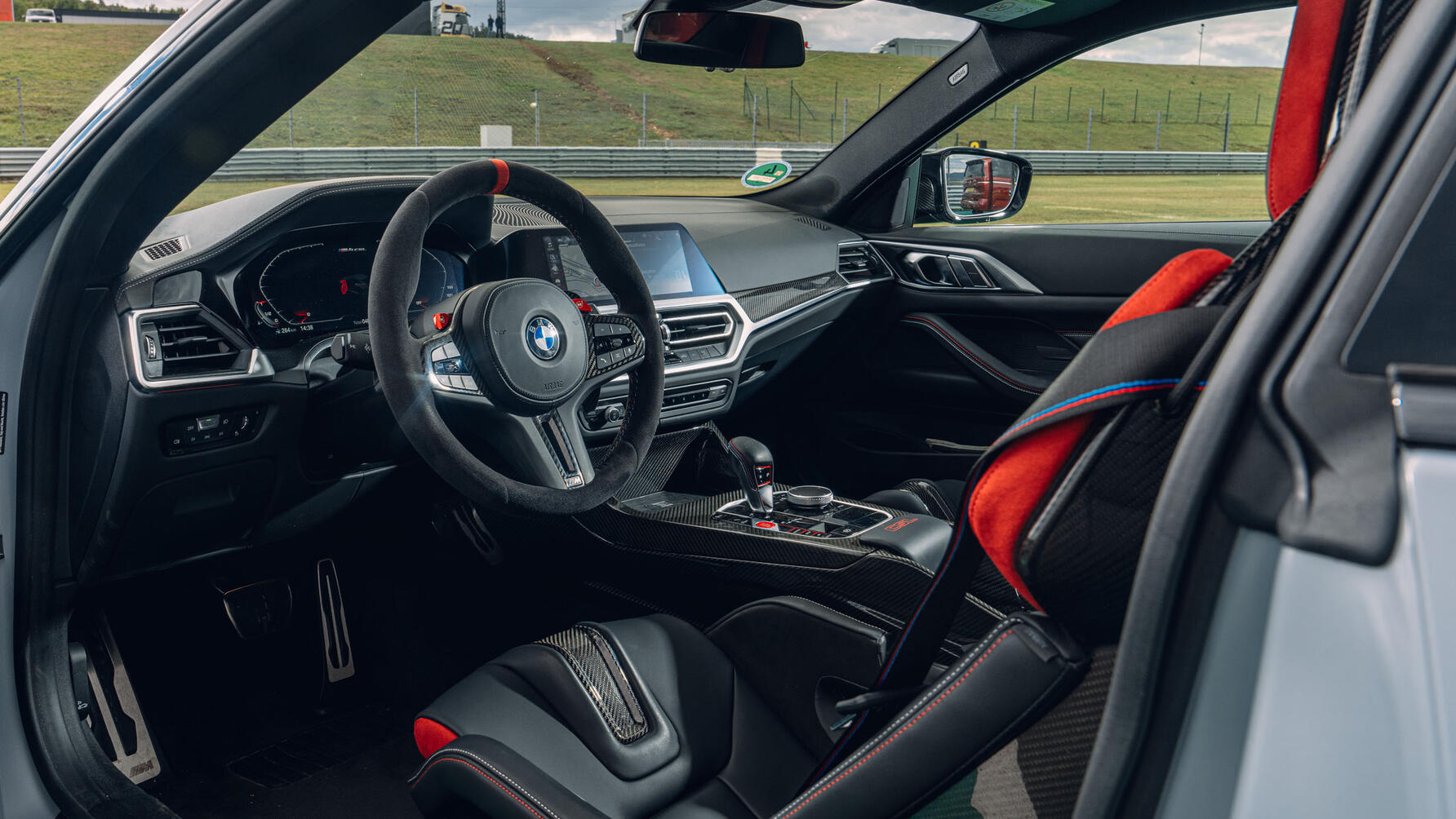 What about on interesting roads?

This is where tyre choice becomes quite critical. On the optional Cup2R rubber which BMW says is specced by over half of buyers, the CSL is a different animal to the standard car. The nose is phenomenally responsive, diving into corners as if it’s front-mid engined. There’s not that much more feedback and as usual M Division’s obese steering wheel is too thick and squidgy to offer any tactility, but the sense of grip is limitless. With the powerful brakes underfoot, the CSL is hugely confidence inspiring, carrying speed like a Nissan GT-R with half the driven wheels.

But swapped onto more weatherproof Pilot Sport 4Ss, the CSL is less trustworthy, with raggedy edges fraying your confidence. It’s difficult to escape the sensation that a set of hot semi-slick tyres would work wonders with pretty much any chassis, especially a normal M4’s. They’re responsible for a huge portion of the CSL’s performance envelope.

So, on the road the CSL struggles to convince it’s nailed the brief before it. It’s a more hunkered down, grippier, angrier and much faster M4, but it feels like an incremental gain mostly owed to chewing gum tyres.

So, we pointed it to a track.

I thought CSL was code for ‘ultimate road car’?

With modern cars, the limits and speeds available are so high, you can’t nudge them on the road. At road speeds, the CSL doesn’t give much back to its expectant driver. So the CSL doesn’t live up to a good part of its mission statement. And that’s a shame.

On track however, it starts to come alive. Having space to properly lean on the front end means you can marvel at the understeer-allergic turn-in, and get a sense – at last – of the car’s agility. The body control is a leap on from the already hugely impressive M4. The brakes remain unimpeachable. There’s massive traction to exploit, plus the hero-spec M Dynamic Mode allows an enjoyable amount of play before it saves your bacon.

No, the engine still lacks charisma, the digital dashboard readouts are a godawful mess and the eight-speed automatic gearbox feels like a saloon car transmission doing its very best karaoke impression of a proper sports car gearbox – downshifts are a particular disappointment, sluggish, soft and delayed. Give us back the old M-DCT twin-clutch any day. But if you can put up with all that, this is a monstrously fast and exploitable track car.

But that’s not the point, is it?

That’s the thorn in the M4 CSL’s side, the contradiction at its very heart. If it’s so much more impressive on circuit (decked out in semi-slicks) then why didn’t BMW lean into that? Fill it with roll cage scaffolding, nail a wing to the boot and call it a GTS.

The CSL is an improved M4, but it’s also a confused product that’s full of mixed messages. I’m certain if 2022 hadn’t been the 50th anniversary of M, then this thing would never have had the CSL badge. It reeks of being a convenient marketing opportunity from the same tone-deaf product planning department that brought you the XM. Why not keep the CSL powder dry and save it for a more appropriate M2 CSL?

They’re all sold. Sold long before anyone putting down the near-£130,000 asking price ever drove one. And if what those 100 people hoped they’d get is the fastest M car ever, which loudly announced that fact, then they’ll be delighted. Somehow, we expected – and hoped for more.