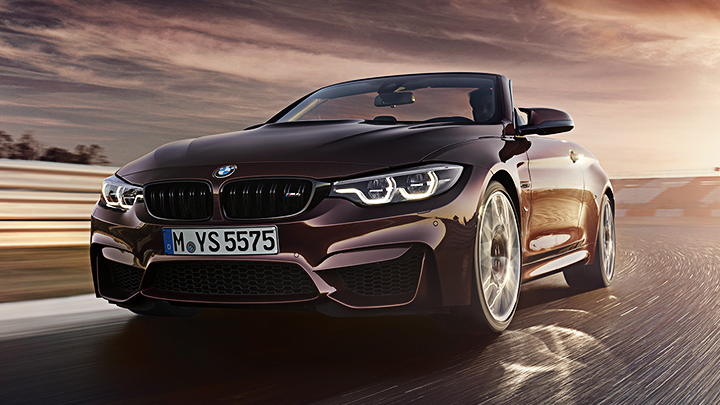 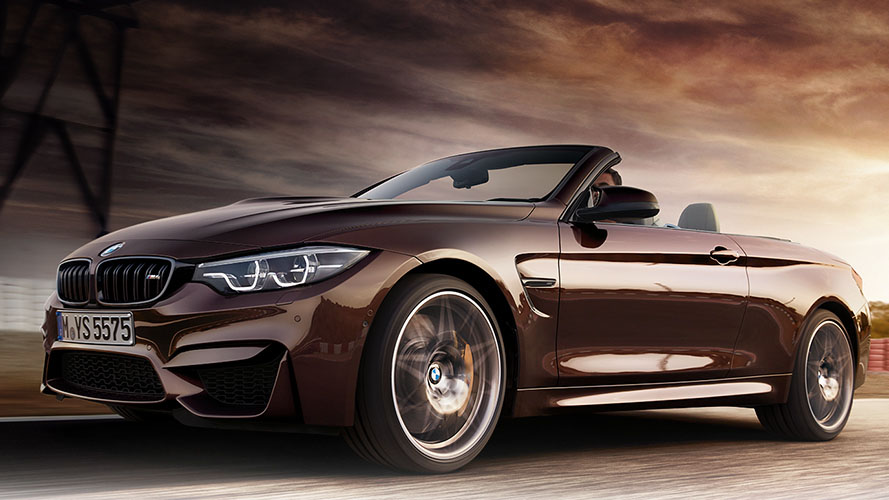 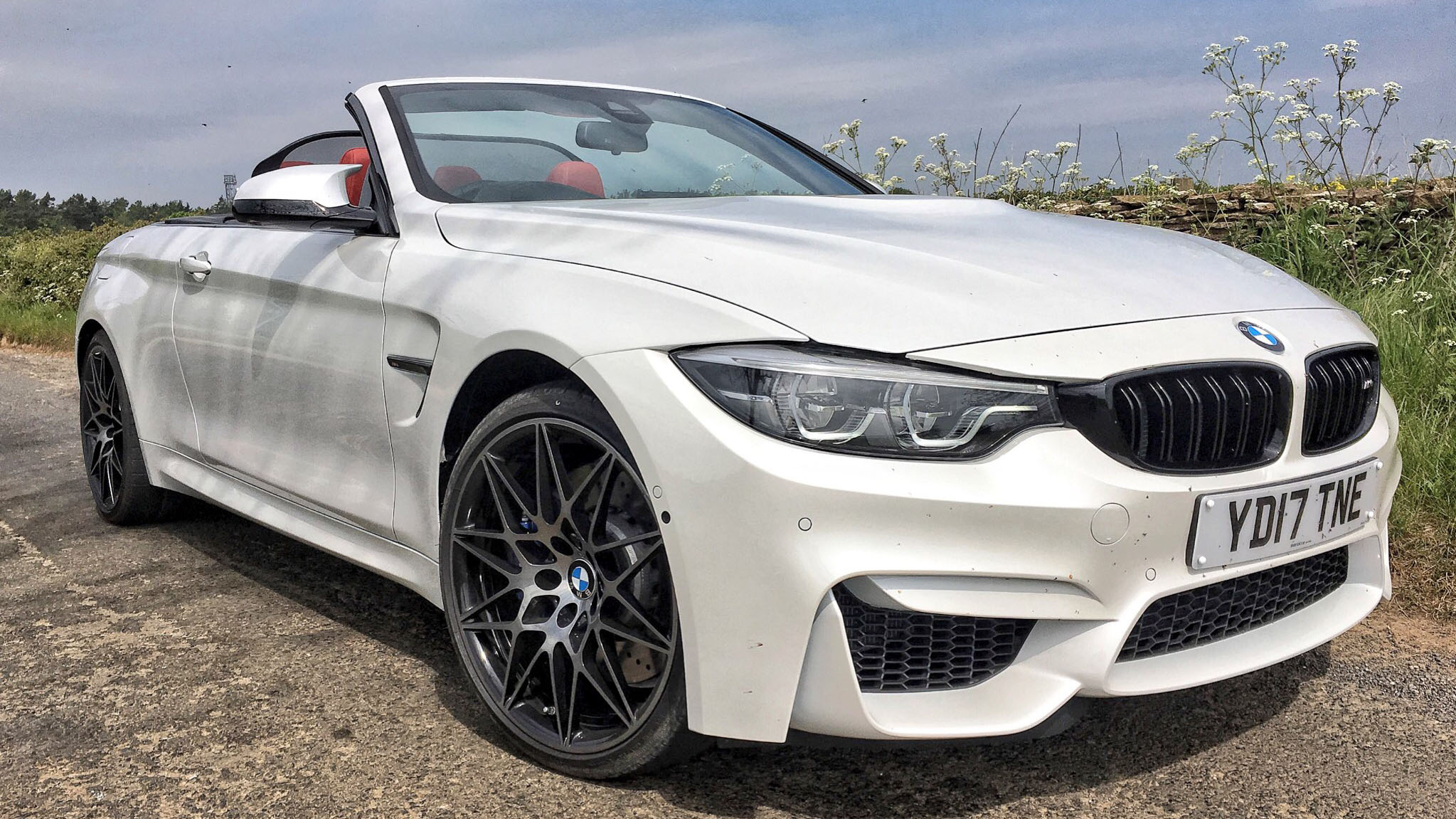 Am I right in thinking the BMW M4 Competition is the faster, stiffer M4?

Yes, the Comp is one rung up from the standard M4, but isn’t as hardcore as the forthcoming M4 CS. Power is up by 19bhp to 444bhp, there’s no more torque (thank goodness), and you get revised, slightly stiffer dampers, spindly 20-inch rims, and a recalibrated, less snatchy electric differential between the rear ones.

And that’s available in the heaviest, least focused, roofless M4?

Yep. For a £2,200 premium – £800 less than what it costs to upgrade the M4 Coupe. Which sort of proves that the Competition Package is little to do with performance improvements and more about marketing. Because if you’re going to spend sixty grand on an M4, why wouldn’t you shell out that tad extra for the hornier one?

Come on, this M4 isn’t for the drivers. It’s for folks more into selfies and suntan than Silverstone and Sebring…

Okay, the image attached to an M4 Convertible is eye-wateringly, erm, polarizing. I drove a white one equipped with searing red leather for a couple of hours and noticed fairly early on not a single other motorist had given a thank-you wave, or given way.

Ironically, being roofless actually helps the M4 Comp on the road. BMW’s clearly had to knock the suspension’s unyielding firmness back a tad, and the result is quite simply, the most supple M4 yet. Finally, it wants to breathe with the road, not attack it with jackhammers. There’s less kickback through the steering, and the column itself is reasonably rigid. So, get cycling through the modes: Comfort at last means just that. It’ll cruise happily, and act the boulevardier. Sport and Sport Plus are on hand if you decide to ruin the pliancy. Just in case.

Whether you ramp up the damper’s mood or not, on poor roads the M4’s lack of rigidity is pretty hilarious, in all honesty. The rear view mirror vibrates, the windscreen bounces and there’s a sense of the body structure vaguely wallowing around you. But like I’ve said, the ride’s far more tolerable even on the 20-inch rims, so you can forgive the flop.

It brings us back full circle – this isn’t the M4 you’d pick if you were serious about driving anyway, so it’s not a serious bugbear. Mind you, a Mercedes-AMG C63 Cabriolet rides properly and has greater integrity than a soggy microwaved Cornish pasty, so what's BMW's excuse? I’ve heard before how engineers are just as worried about a stiffer structure rattling the folding roof mechanism to submission as they are keeping the shell itself scuttle-shake free, so the folding hard-top BMW is always at a disadvantage to fabric roof rivals, like the AMG. The upshot is it’s pleasingly quieter on the move with its roof locked up top.

The M4’s always been a fighty, angry machine – does that suit topless motoring?

Again, it’s surprisingly likeable, and oddly fit for purpose. Roof retracted, the 3.0-litre bi-turbo straight six sounds more organic. More like an engine, and less synthesized through the speakers. The M4 is a car embarrassed by its turbocharging – it hides the fact, with uber-sharp throttle response, no turbo boost gauge, and the fake induction noise.

But with the jigsaw top stowed back in the boot, your ears detect the whistles and chatters that a turbo engine ought to celebrate, and combined with the furious blare of the Comp Pack’s exhaust, accelerating is less about max-attack numbers and more enjoyable to savour. Buffeting is nicely tidied up with the windbreaker erected (a manual process, unlike AMG’s rival).

Does it still feel fast?

Oh it’s massively quick, but even the M4’s outrageously potent engine notices the 310kg of extra mass it’s got to shift. It can’t dispatch gears with the same distain the coupe does, which always wants another gear, another straight, more speed, more throttle. Everything’s less vivid in the cabrio.

The standard M4 Coupe (rather than the way better-sorted Comp version) always feels like a machine that’s heavier than it really is because of its heaving body control over crests and through compressions, and the doughy deadness of its steering, so actually making the car heavier hasn't dreadfully upset its reflexes. It’s simply not the poor relation you’d suspect, so long as the road surface is impeccable. Throw it at a hotchpotch surface and it’s all at sea.

Who’d have thought it: the least hardcore M4 is actually enjoyable to punt along?

There’s more. This particular M4 was that rarest of beasts: a manual. I've included some photos of the exact car in all its strawberries'n'cream glory above. BMW’s already admitted the next hot 3 and 4 Series will likely not offer a three-pedal option, such is the engineering demand for DCTs (faster lap times) and from customers (easier daily driving). The Porsche-led thirst for old-school manual thrills hasn’t permeated the M Division yet. Demand’s even dried up for the US-only manual M5 and M6, so BMW’s killed them.

So, you’d expect the manual M4 to be an afterthought. Traditionally, modern BMW manuals haven’t had the mechanical precision of a Porsche gearbox, or the slickness of a good hot hatchbacks’. They’re a bit wooly and vague, on the whole. So, what a pleasant surprise to find the M4 Comp’s is not only direct and positive, but it adds a new dimension to driving the M4. Instead of being intimidated by the engine’s sheer urge, you get a little breather at every upchange, taking time to depress the light, long-travel clutch and deliberately move the lever. It’s a really satisfying process, because you’re busier and more engaged with how the car’s gaining momentum down the road, rather than just watching the numbers race towards a court hearing.

BMW will probably sell fewer M4 Comp Convertibles in the next few years than it will M-branded pairs of underwear or Barbie pink X6s, but against all the odds, prejudices and assumptions, the easy-going M car is a flawed yet slightly beguiling experience. I’m as surprised as you are.