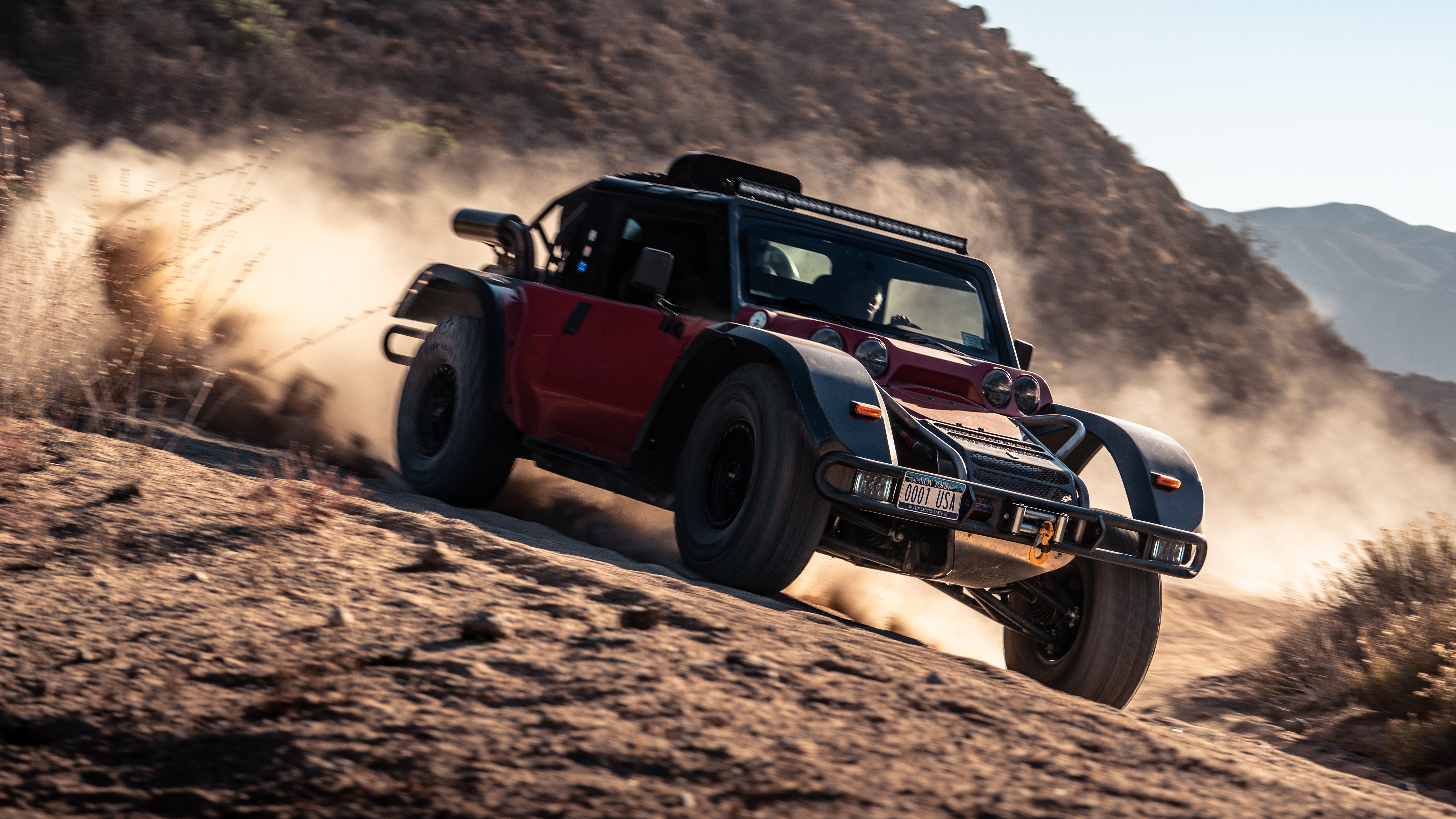 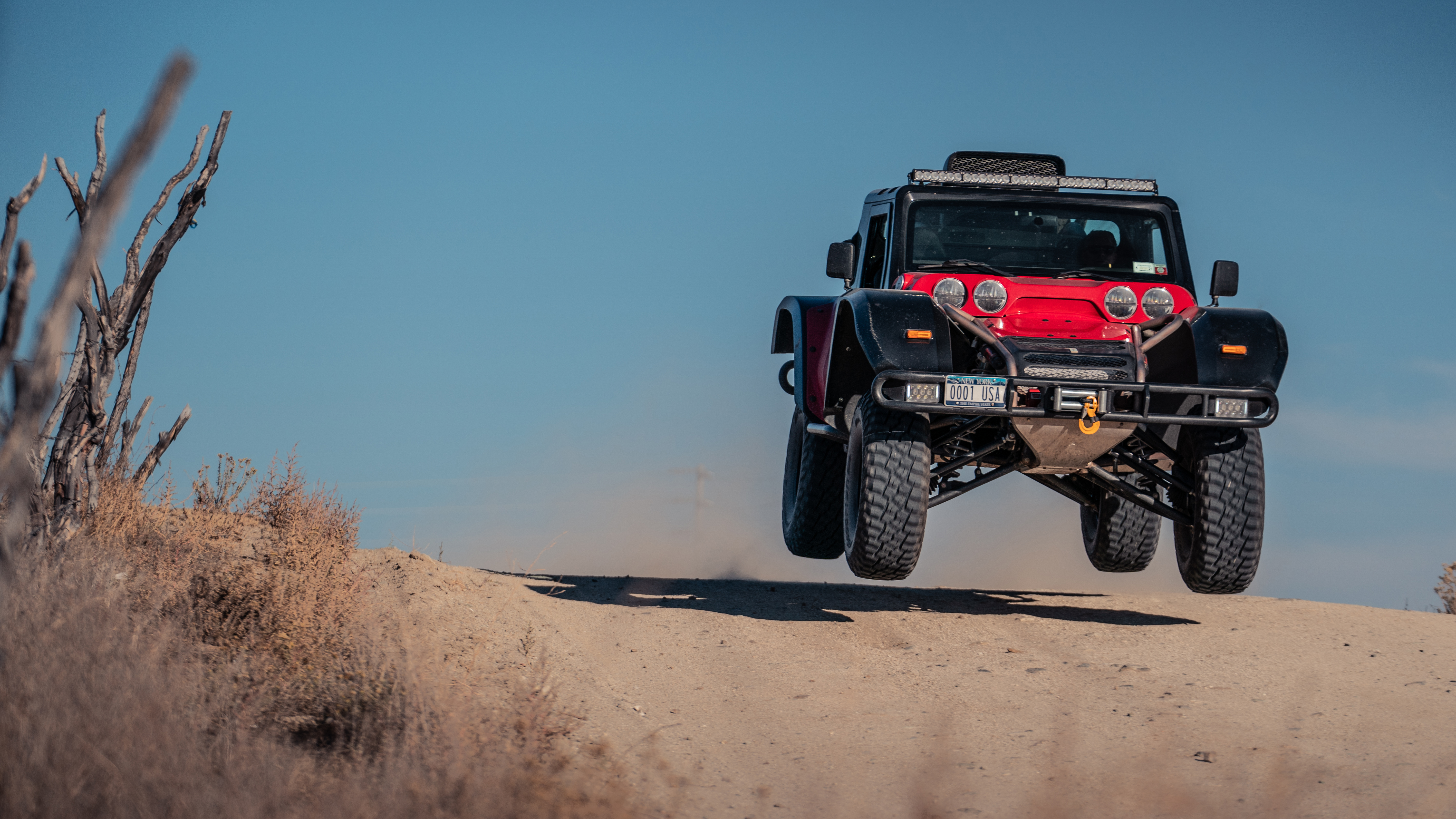 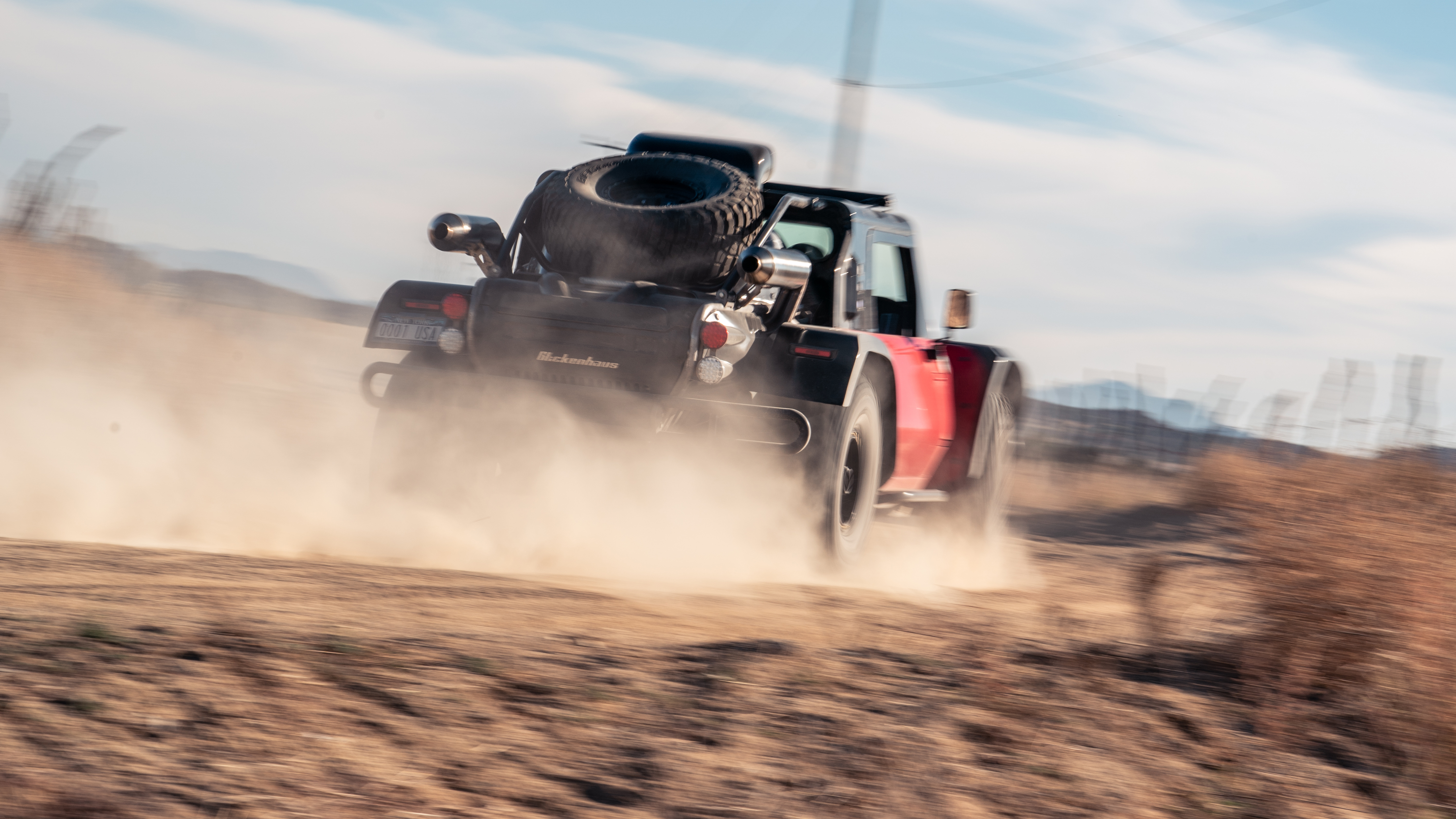 What in the name of holy driveshafts and clutch-kicks is that?

The SCG Boot, one of the most bizarre-looking and perplexingly engineered road cars on the planet. With exposed bodywork, the headlight structure of a jumping spider, huge off-road tyres, supersized suspension and Tonka-toy dimensions, it’s all rather imposing isn’t it?

Especially as it wears a supercharged V8 engine like a teenager’s rucksack, has a roof-mounted snorkel and two Gatling gun exhausts straddling a full-size spare. It’s a visual assault. One that could easily be mistaken for some sort of childish marketing joke – a 1:1 scale cereal box toy or something. But it isn’t. It’s a very serious, very real, very four-eyed, 650bhp middle finger to the Lamborghini Urus, Rolls-Royce Cullinan and Aston Martin DBX.

Well, it’s the latest project from film director, car collector, race team owner and car manufacturer Jim Glickenhaus. If you don’t know the name, in recent years Jim and his iconoclastic Scuderia Cameron Glickenhaus (SCG) outfit have made a name for themselves by ditching rose-tinted spectacles for reality by putting deepfakes on hardcore motoring nostalgia. Take the P4/5, his $3m coachbuilt Enzo throwback that initially went down at Ferrari like a mouthful of sick. Modulo, the extra-terrestrial concept wedge from Pininfarina that Jim got running and approved for road use. Or SCG003, the class-winning VLN car that any Billy can go and buy. Now, his crusade continues – this time going for the jugular of the zeitgeist: performance SUVs.

That’s because it is. Fed up with the new breed of super-SUVs that can’t actually off-road, Jim wanted to build a car that was capable of driving to the Baja 1000 [the world’s longest and most gruelling non-stop off-road race], compete, then drive home again. So that’s exactly what he’s built, using Steve McQueen’s 1967 Baja Boot as a muse.

Hold the phone, what’s the Baja Boot? And what’s Steve McQueen got to do with it?

The original Baja Boot was the product of one of America’s greatest technical minds, Vic Hickey. He was somewhat of an off-road savant, and the original Baja Boot was one of his skunkworks specials, after he had designed the lunar rover. Wanting to compete in the Baja rally, he constructed a steel tubular frame, dropped a Chevy Camaro V8 directly behind the driver (like a Grand Prix car) and hooked it up to an automatic gearbox (to make driving off-road more manageable). He then added Corvette differentials, four-wheel drive, a trick transfer case, close-ratio power steering, torsion-bar suspension, chunky tyres and disc brakes. He christened it the ‘Baja Boot’, as it raced down the length of Mexico, grabbing the attention of Hollywood’s Steve McQueen, who competed in it the following year.

Is the new one anything like the old one?

Yep, just a bit bigger. And fit for 2020. Fundamentally, it follows exactly the same principles and layout as the original – just modified for better performance. There’s still a tube-frame chassis and independent suspension, but real strides have been made in the tech – especially the suspension – over the last 50 years. In the Sixties, the original Boot was deemed cutting-edge for having 9in of travel and Bilstein dampers. That’s child’s play compared to the new Boot’s monster 19in of travel and internal bypass coil-over dampers from Fox – the same shocks that are on Dakar Minis, no less.

Wheels and tyres have grown too, now 17in Method Race beadlock wheels wearing massive 39in BF Goodrich tyres. Remarkably, the engine follows the same philosophy as Vic had intended: a small-block Chevy V8, turned 180 degrees and mounted out back. But now it’s a supercharged 650bhp, 6.2-litre LT4 from a Camaro, and pushed even further back to help balance. It’s hooked up to a GM 4spd 4L80-E automatic transmission that’s pretty much nuke-proof and comes with a switchable 4WD system. And a winch. Because every car needs a winch. And a light bar. It’s componentry to make hardcore Defender boys and their muddy fingernails dizzy.

It takes some getting used to. You’re aware that giant wheels are sprouting out of each corner, but you don’t know exactly where. Given you clog up most of a lane, you’re fearful you may accidentally trample over a Prius – especially with the steering set-up. It’s an ultra-quick rack, meaning economy of movement is key. Combined with soft, lollopy suspension (plus acres of roll you need to fight through) means you have to be patient, allowing for the truck to settle on its springs. When it does, you can lean on it and trust it. But you’ve got to be careful, as the weight can see-saw the other way, making it easy to get in a pickle and an almighty tank-slapper.

It’s comfortable, though. Not plush (“You can throw up on the floor and hose it out,” Jim says), but the interior is spacious, a trait accentuated by the full-width panoramic ‘Moon Roof’. You snuggle into remarkably comfortable and supportive carbon-backed seats from Sparco (the same as a Lotus Evora), there’s Apple CarPlay, USB ports and cupholders. It’s genuinely usable. And, when the production car goes on sale next year, Jim plans to make a ‘Gotham Pack’: a sealed and soundproof cabin that might be the ultimate go-anywhere GT cruiser, especially when the four-seat, four-door version comes along later next year.

Looks like it could eat up the scenery off-road though.

You betcha. Clog the throttle and the two rear wheels (it’s switchable 4WD, remember) bury themselves into the dusty floor like circular saws, throwing the scenery behind the truck until it hooks up and accelerates unlike any other road car on sale. First, you’re hit with a wall of noise as the angry LT4 roars round until the rev-limiter on the Motec dash starts looking like the Blackpool illuminations. That’s compounded by a high-pitch supercharger harmonising proceedings as the gearbox starts sounding like a hamster in a blender. But noise quickly turns to movement. A hilarious amount of movement. With each throttle input, the rear suspension compresses until you’ve used all the travel, where you then start to plane above the desert like a speedboat. Stomp the brakes – and with no servo assistance, it is a stomp – and the bonnet points itself at the floor... literally at the floor. Tip into a corner, and the body roll makes it feel like the whole thing is about to pitch right over.

It isn’t, mainly because it’s been put together by Armada Engineering (folks behind Baja winning trucks) with proper hardware. To put it simply, the Boot is an Ariel Nomad that’s been to Hell Week, got jacked and angry. In the off-road Atom, you can happily hit toaster-sized boulders all day. In the Boot, fridges. Commercial fridges. That’s the scale of hard, unforgiving desert furniture you can simply fire it at and drive over with ease. It’s mind-scrambling. You wince, expecting the suspension turrets to fire out of the top of the arches like mortars, but it just compresses and swallows them whole. You have to condition yourself, mind. It’s very easy to overdrive, as the dynamics quickly become trustworthy and unbelievably confidence-inspiring. So much so, you just huck it over a jump for the sake of it.

And despite being 2,517kg, it’s surprisingly agile and adjustable. As soon as you strap in, it’s like you’re docked directly in the chassis and become part of the machine. A well-set-up car means you don’t need to think; it becomes intrinsic, natural and telepathic in its communication. This is what you need when racing for 1,000 miles across the desert, across booby-trapped fields with six-foot whoops that go on for hundreds of miles during the night. The fact it’s got numberplates and can be used on the schoolrun is a bonus. A brilliant bonus.

You rate it then?

From an entertainment point of view, it’s one of the best cars we’ve ever driven. And being able to make progress through places no cars should rightly go is a significant selling point. The SCG Boot is the modern-day Lamborghini LM002. It’s the car many wanted the Urus to be but never got. And, at £197,000, it’s a similar price. Which, when you consider it’s a small-time manufacturer using ritzy bits, seems like a bit of a steal. Especially as Jim’s now done what he’d said he’d do and proved you can rock up and finish the Baja 1000 in it, beating Ford in the process. Try that in your Cullinan, Urus or DBX.