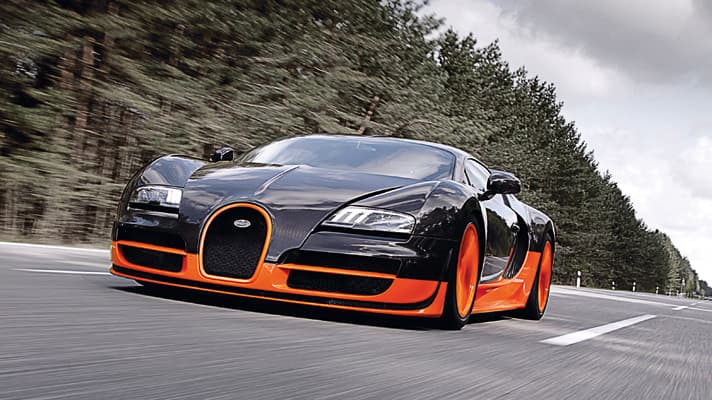 James May recently drove a Bugatti Veyron Super Sport to 259mph, a world-record speed at which most human beings would have exploded, looking for all the world as if he was doing a mildly irritating Sudoku. Test driver Pierre-Henri Raphanel then immediately drove the same Bugatti Veyron SS to a speed of 268mph, thus handing JM the least-amount-of-time-holding-a-world-record title and making him shout the word ‘cock' very loudly.

The pair of them were essentially driving a Veyron with 20 per cent more power and much slipperier aerodynamics. This sounds reasonable, until you recap and realise that you're already talking about a Veyron and that a faster, more powerful version,a Veyron Super Sport, equates to 1,200bhp, 1,500lb ft of torque, 0-62mph in 2.5 seconds, 0-124mph in 6.7 seconds and a top speed of 258mph (limited in production to protect the tyres). The equivalent, then, of turning up to a supercar knife-fight with a tactical nuke and a viciously sarcastic video link.

But can this straight-line monster actually go around a corner, or is it simply a one-trick speed-pony? Well, yes. Yes it can. It can deploy the one-trick (actually being faster than light, thought, or any other intellectual analogy you can think up) around corners, on straights, up hills, in town and anywhere else you care to point it. Or more accurately, aim. In fact, despite being as docile as a DSG VW Golf around town - albeit an 1,800kg VW Golf that sounds like a mountain falling over - the strange thing about the Veyron SS is that you can deploy 1,200bhp and 1,500lb ft. Obviously strafing around town at 200mph would be frowned upon by the authorities, but seriously, even on mountain hairpins and very bumpy sections of B-road, the SS was quite capable of making the rest of the world a dirty blur, while remaining a sweat-free breeze within the cabin. It is literally incredible, beyond thought, a Veyron turned up to 11. Even the consumption figures are reassuringly ridiculous - in town, the SS will emit 837g/km and manage an urban mpg of 7. At full throttle, a standard Veyron will empty its tank in 12 minutes. An SS will do it in eight.

But the truth of the matter is that driving any Veyron is an ultimate experience, not a precise joy. There are cars out there that offer intimacy and tactility beyond the big Bug at literally half the speed, making it both the most extraordinary car in existence and yet the last one you should buy if you enjoy driving. Because once you've driven an SS, everything else even vaguely fast is, basically, spoiled.