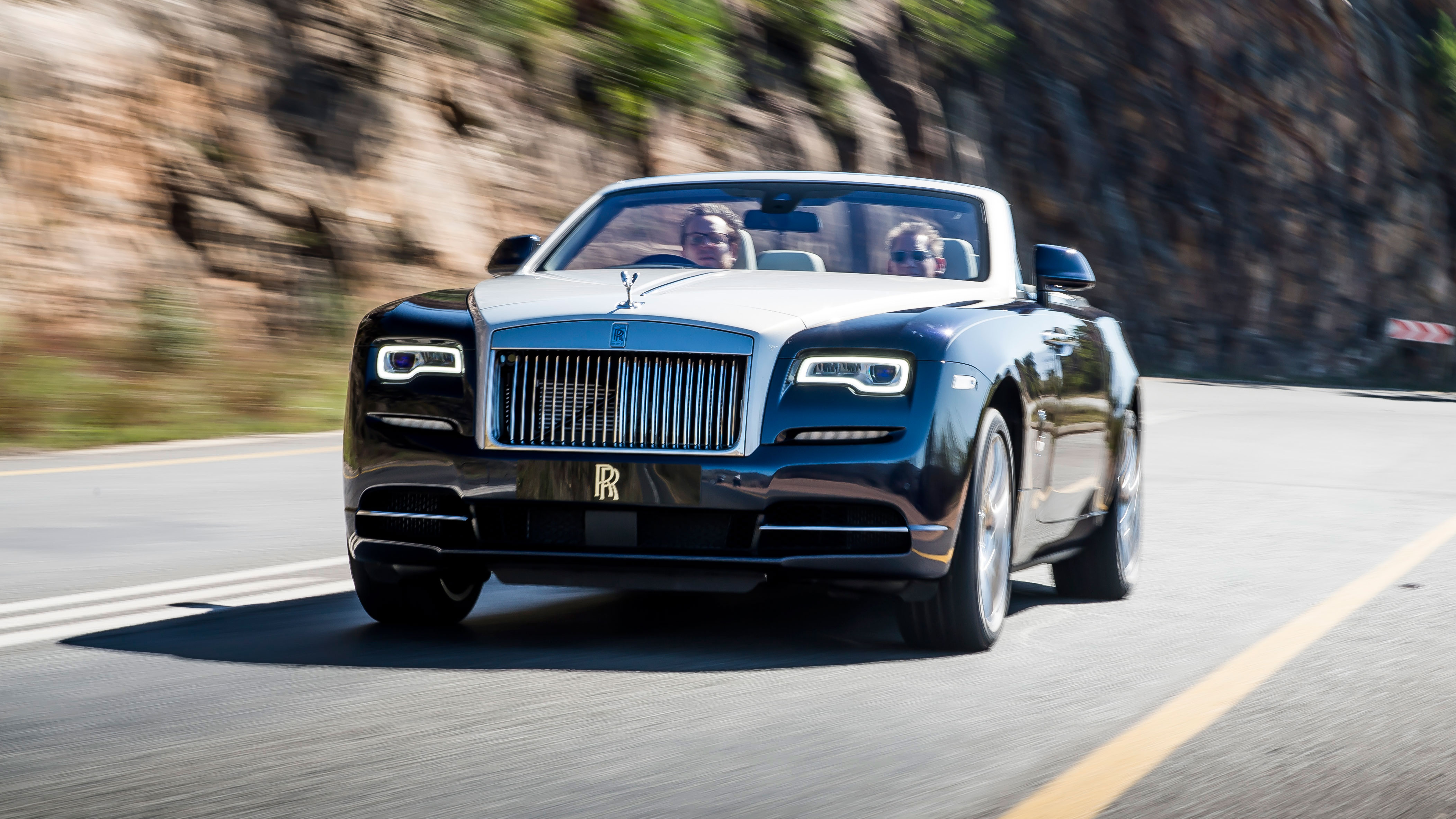 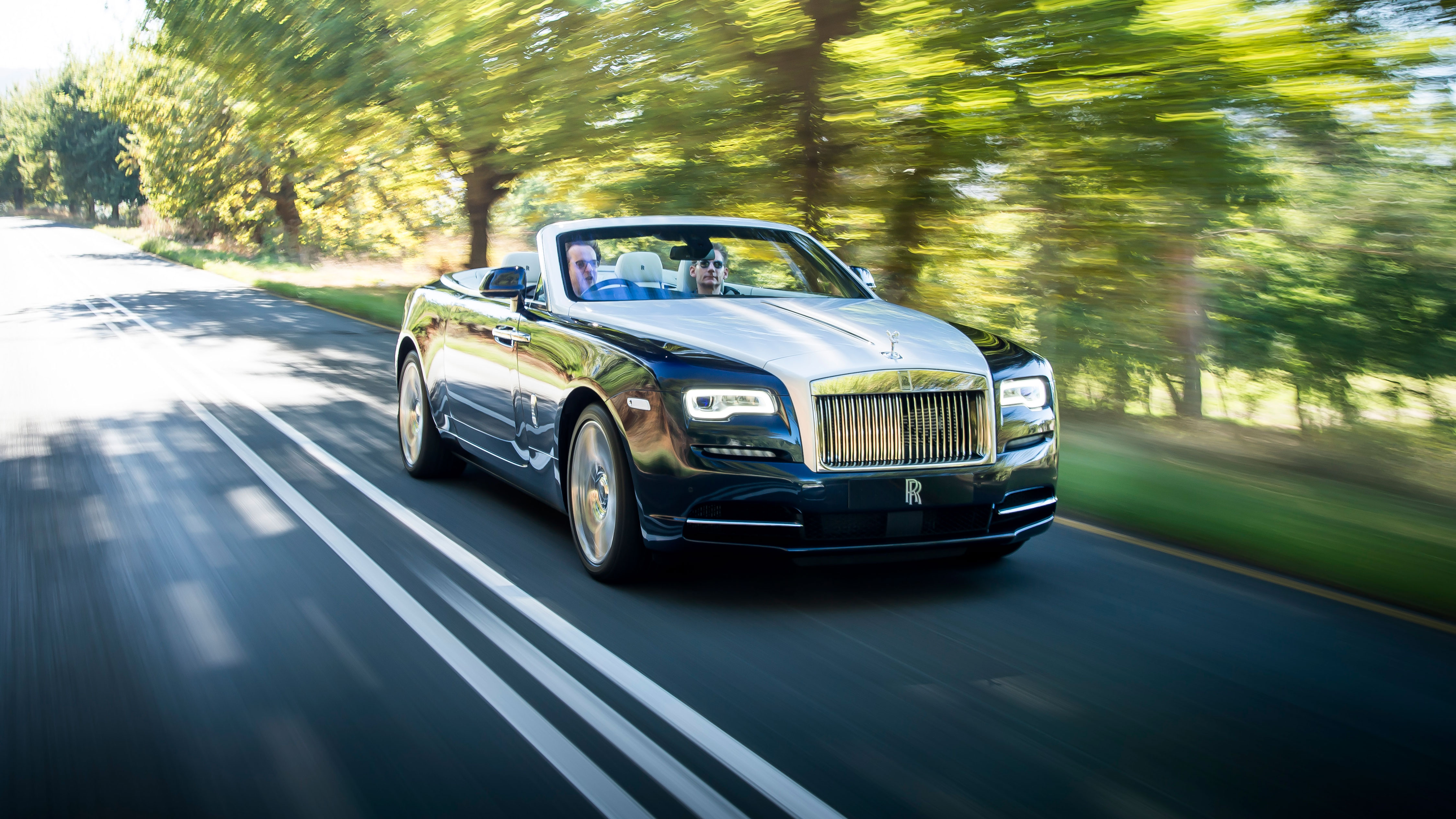 A new Rolls-Royce. They don’t come along very often.

No, they don’t. And there’s way more to this one than first meets the eye. According to Rolls director of design, Giles Taylor, the aim wasn’t just to design a beautiful motor car, it was to envision one that made the occupants look like rock stars. A noble ambition, but a tall order given that images of TG.com are unlikely to appear in any of his team’s mood-boards. You need some serious chutzpah to pull this thing off. Not to mention a bucket of factor 30 SPF emulsion, if you’re dealing with a South African summer.

Talk about first world problems. Moving on – what sort of name is Dawn? We're thinking dowdy receptionist in a Midlands grommet manufacturer rather than la dolce vita…

Oh, that’s harsh. It’s not Maureen, is it? Besides, after all the ghostly goings-on with Phantoms and Wraiths, Rolls says the name of this new convertible symbolises the start of a significant new era for the company. It also invokes the spirit of the early 1950s Silver Dawn, of which only 28 were ever made, each individually coach-built and Britain’s entry into the emerging post-WWII feelgood. Well, assuming you were as rich as Croesus. Otherwise you were still on ration tokens and gravel for breakfast.

Yes. With Phantom production winding down after 13 years – its replacement isn’t due unti 2018, a deliberate interregnum only Rolls could pull off – and the SUV incoming (a ‘high-riding vehicle’ in Rolls-speak), the Dawn is leading the push for a younger, more dynamic clientele. Fat old cigar chompers with exploded facial capillaries and a wardrobe full of red trousers would be advised to look elsewhere. Rolls is chasing new-age Silicon Valley gazillionaires and would rather see Cara Delevingne and St Vincent exiting elegantly through those magnificent rear-hinged doors. But the Dawn is also a full four-seater, so there’s room for their friends, too. They can have fun walking said door to the chassis (as opposed to merely closing it).

Right. But isn’t the Dawn basically a Wraith with the roof lopped off?

Steady on. Rolls says 80 per cent of the body panels are unique, and even the tyres are bespoke (this word may crop up again). Whatever its provenance, it’s a jaw-dropping thing to behold in the flesh. The surfaces have been worked with millimetric precision and an obsessive attention to detail. There’s no wind kerfuffle over the roof when it’s up, and it folds away in complete silence in 22 seconds (a silent ballet, says Rolls). Yes, this is a big and imposing car, and clearly not for shrinking violets or Jeremy Corbyn. Few places in the world juxtapose wealth with extreme poverty more starkly than South Africa, but the folk in the townships we passed through cheered the car rather than throwing missiles at it. Subjectively, there aren’t many views more empowering than the one through the windscreen of a contemporary Rolls-Royce and across the vast acreage of premium real estate that doubles as a bonnet. The Dawn tweaks the empowerment up a little further – an inch further, to be exact – by raising the Spirit of Ecstasy, and introducing a ‘wake’ channel. The nose is the expected imperious ‘out-of-my-way-proles’ number, but the rear end is beautifully resolved. Even when you’re not moving, the subtext is serious forward motion, with an energy flow behind you reminiscent of a jet plane’s vapour trail.

It’s not. Honestly. Rolls doesn’t just make cars, it curates experiences. And if that sounds like more marketing hokum, your preconceptions will melt away the moment you get moving. Nothing looks, feels or behaves like a Rolls-Royce. And if you’ve got the readies to afford a car like this, that’s what really counts. We talked with the company’s CEO Torsten Mueller-Oetvoes and at no point did the words ‘sales volume’ enter the equation. These guys are truly customer-focused.

But doesn’t it look less impressive with the roof up?

Nope. If anything, it looks even cooler. Rolls insists that a folding hard-top isn’t brand appropriate, and on a car of this heft fitting all the necessary gubbins would have saddled the Dawn with an arse the size of a small country. So canvas it is, the edges rolling perfectly onto the top of a window line to create a shape that conjures up 1930s hot rods or a power boat. In design-speak, the car has a high beltline and shallow DLO, to quite brilliant effect. Naturally, the Dawn is available in a bewildering array of exterior colours, but you know a car is fundamentally good when it can get away with a Mandarin orange interior. The quality is off-the-scale good, as you’d hope, and there’s a little extra brightwork inside on the dials to differentiate the Dawn from Wraith. It also manages to avoid the trad tropes of lesser luxury cars, while dodging bling. Impressive.

Did you actually drive it or just dribble over it?

Listen, you don’t drive a Rolls, you experience it. This is the world’s stiffest four-seater convertible, and it certainly feels like the least tremulous open-top car we’ve driven. It’s 24mm wider than the Ghost, and the wheelbase is 180mm shorter. The car’s centre of gravity is lower, too, and the suspension has been reworked with new air springs and active roll bars. This is not a car you’d be naturally inclined to hustle, but if you do give it the hurry-up the Dawn disguises its weight (all 2560kg of it) and handles with amazing alacrity.

Most of the time you finesse this car along, not quite steering it with your fingertips like you do a Phantom, but engaging with the road and the whole process of travelling in a way that’s genuinely unique. The engine is the same silken 6.6-litre, 563bhp twin-turbo V12 that the Ghost uses; those 575 torques generally remain theoretical until you tickle the throttle. The feeling of gathering momentum is similar to the one you experience in an Airbus A380 on take-off, yet the Power Reserve dial is a reminder that you’re mostly only using six or seven per cent of what’s available. It’s also stunningly refined. ZF’s eight-speed auto is in charge of harnessing all this potential, and the Dawn uses the Satellite Aided Transmission software that debuted in the Wraith to read the road ahead and select the appropriate ratio according to one’s driving style. In other words, it’ll hold onto third gear if you’re in hoon mode. It seems to work, although we could do without it. Surely a Rolls owner should be completely in charge of his or her destiny?

You liked it, then…

That’s an understatement. Rolls-Royces are the most sensual and immersive luxury car experiences available, bar none. In losing its roof, the Dawn adds an extra sensory dimension to the scenario. It’s utterly, bewitchingly magnificent.