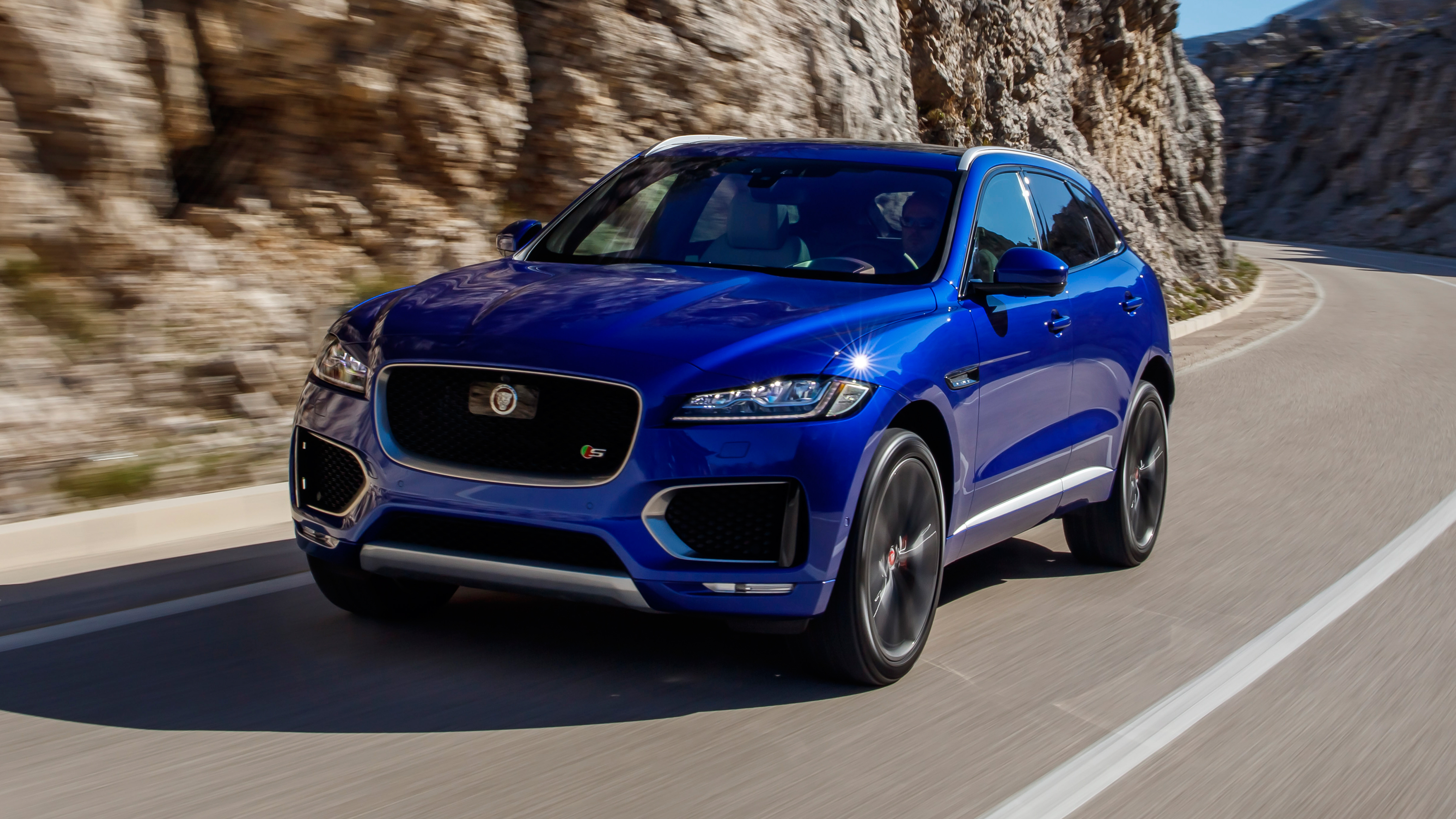 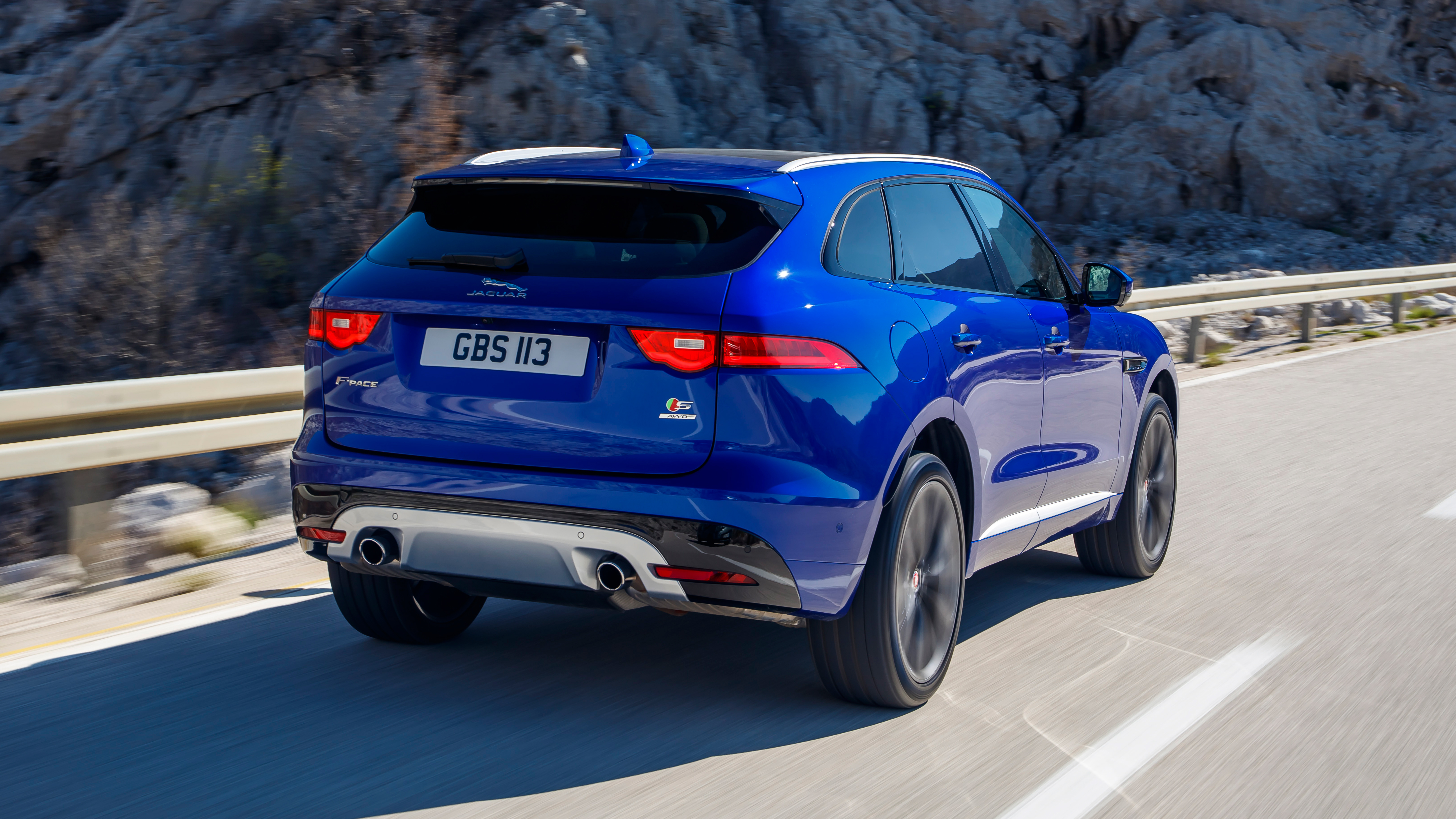 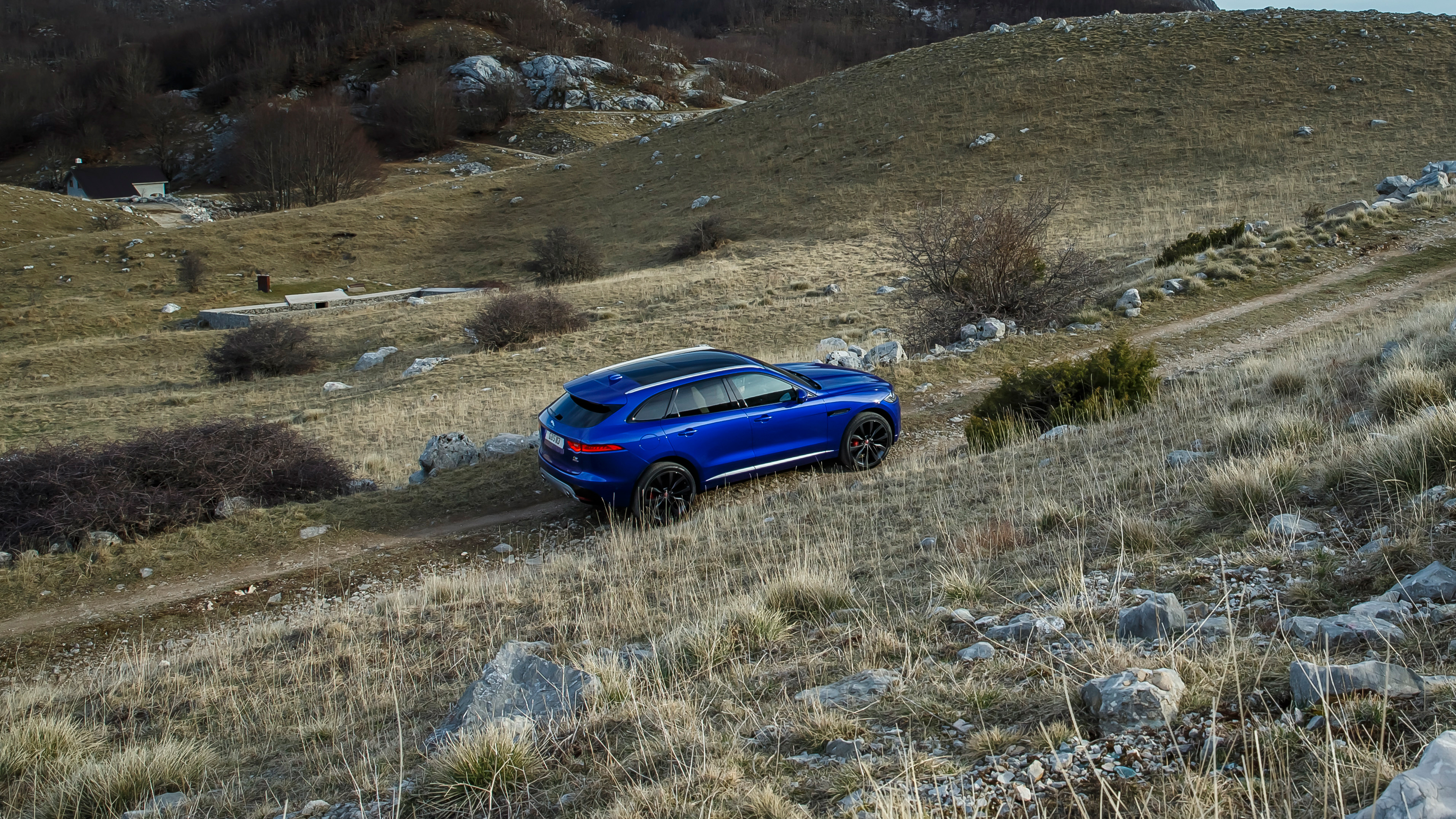 Only the first ever SUV Jaguar has ever produced. The F-Pace might arrive over a decade later than BMW, Porsche and Audi all entered the SUV party, but frankly, who cares – SUV sales continue to go through the roof and Jaguar has taken 2,500 pre-orders from UK customers before anyone’s actually driven it.

Absolutely, which is why the F-Pace toes a very different line. A part-time four-wheel-drive system means it’s rear-drive in normal situations, only sending up to 50 per cent of the power to the front tyres when they’re scrabbling around for grip.

It has 213mm ground clearance (the same as a Discovery Sport) and a wading depth of 525mm (175mm less than the Disco), so it’ll get you safely to your country bolt-hole in bad weather, but the focus here is on an SUV that’s fun to drive and seductive to look at, not the first choice for Arctic expeditions.

More sports car on stilts than full-blown SUV, then?

That’s one way of looking at it, except the F-Pace is still a big lump of metal. At 4.7m long, it sits somewhere between the XE and XF saloons, with whom it shares its flexible Lightweight Aluminium Architecture). But at 1.9m and 1.7m respectively, it’s significantly wider and taller than both.

Whichever way you measure it, it’s bigger than the Porsche Macan and smaller than the Cayenne. But thanks to an 80 per cent aluminium structure, the 3.0-litre supercharged V6 model we drove weighs 1,861kg - 80kg less than the equivalent Macan.

The advantages of its relatively long wheelbase and short overhangs – besides what designer-types would call ‘nice proportions’ - is lots of space inside. All that width means you can easily sit three adults in the back, and there are 650 litres of boot space with the rear seats up, or 1,740 litres with them forward, versus 500/1,500 for the Macan.

What about the bits you can’t see?

The suspension is double wishbone front, multi-link rear. Just like the F-Type, as Jaguar is extremely fond of reminding us, but with a fair bit more travel. Variable ratio electromechanical steering (the ratio increases as you increase the lock) is your only option and two stage adaptive dampers can be added, along with wheels ranging from 18in to the full-blown 22in on the £65,275 ‘First Edition’ we drove, loaded with every possible extra.

A dynamic mode brings sharper throttle response, more weight to the steering, firmer two-stage dampers and more aggressive mapping for the eight-speed auto, while a torque vectoring system tweaks the inside rear brake to help get the car turned in.

I assume it has engines, too?

Why of course, and you’ll be familiar with this lot. For company car buyers and anyone with a fondness for their bank account there’s the 178bhp four-cylinder 2.0 diesel, available with a six-speed manual or eight-speed auto, and rear- or four-wheel drive.

We drove the 375bhp 3.0-litre supercharged V6 that’s a snarling animal in the F-Type, but far tamer here. A 0-62mph time of 5.5 seconds isn’t slow for something this size, but when you’re familiar with it’s bark and bite in an F-Type, it feels wrapped in cotton wool.

Throttle response is sharp, but could be crisper. Take hold of the paddles, meanwhile, and gear shifts are smart enough, but rounded off at the edges. Unless you really cling onto a cog and let it build to a gnashing crescendo, it sounds gagged.

But that doesn’t matter a jot; it’s how an SUV should be, and well judged by Jaguar. The problem is the engine itself isn’t a great fit for the car. We suspect the six-pot diesel is the pick of the bunch.

Enough posturing, does it put the ‘sport’ in SUV?

Yes and no. As mentioned before, despite its aluminium construction it’s still a big lump and in sharp corners there’s no hiding it. Body control is tighter than any Land Rover model, that’s for sure, but there’s still more body roll than we’re used to in modern Jags – that’s just physics.

So, you won’t be chucking this thing about like a hot-hatch, but then that’s the wrong criteria to be judging it against. Ultimately it’s not as pointy as a Macan, but Jaguar knows that engineering the F-Pace to out-handle the Porsche on a racetrack is a futile exercise. What customers want here is comfort, space and something sexy to pick Hugo up from fives practice in.

The steering is faster than most SUVs, but stops short of feeling twitchy. I wouldn’t say there’s any meaningful feedback, but the way it weights up is certainly consistent, allowing you to pick a line early and confidently stick to it. Lurch the wheel around and you’ll soon be aware of the car’s size and weight, but dial back your binary inputs and drive briskly, not manically, and it responds with slick, balanced movements. Ultimately, its safe zone is fast, open B-roads and A-roads where it gobbles up big mileages in supreme comfort.

Yep, you read that right, even on 22s, and on some frankly appalling road surfaces in Montenegro where we drove the car, it remained comfortable. Our advice would be to stick with the 20s though, which look great, allow you to venture further off-road and should add an extra degree of suppleness. 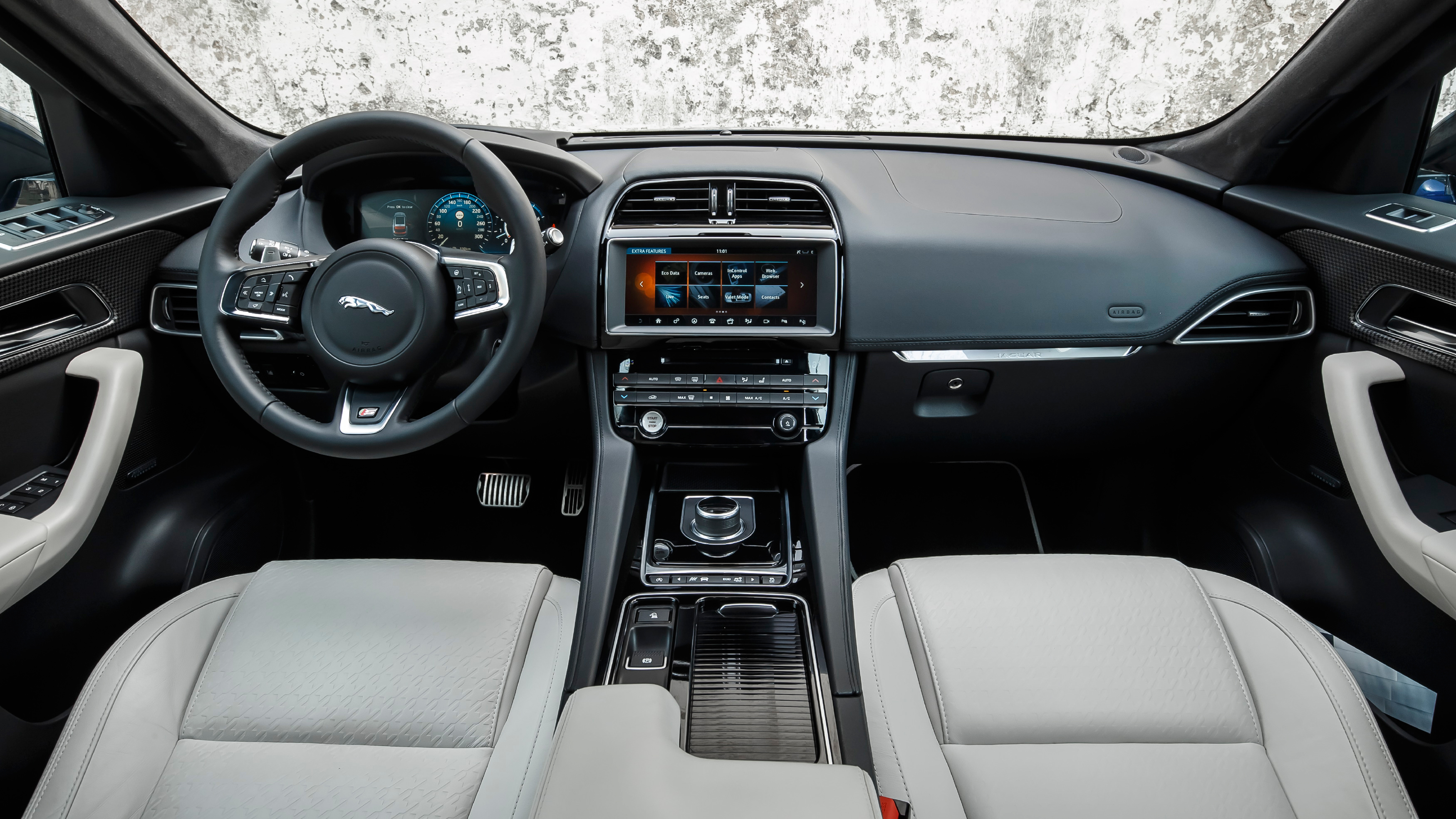 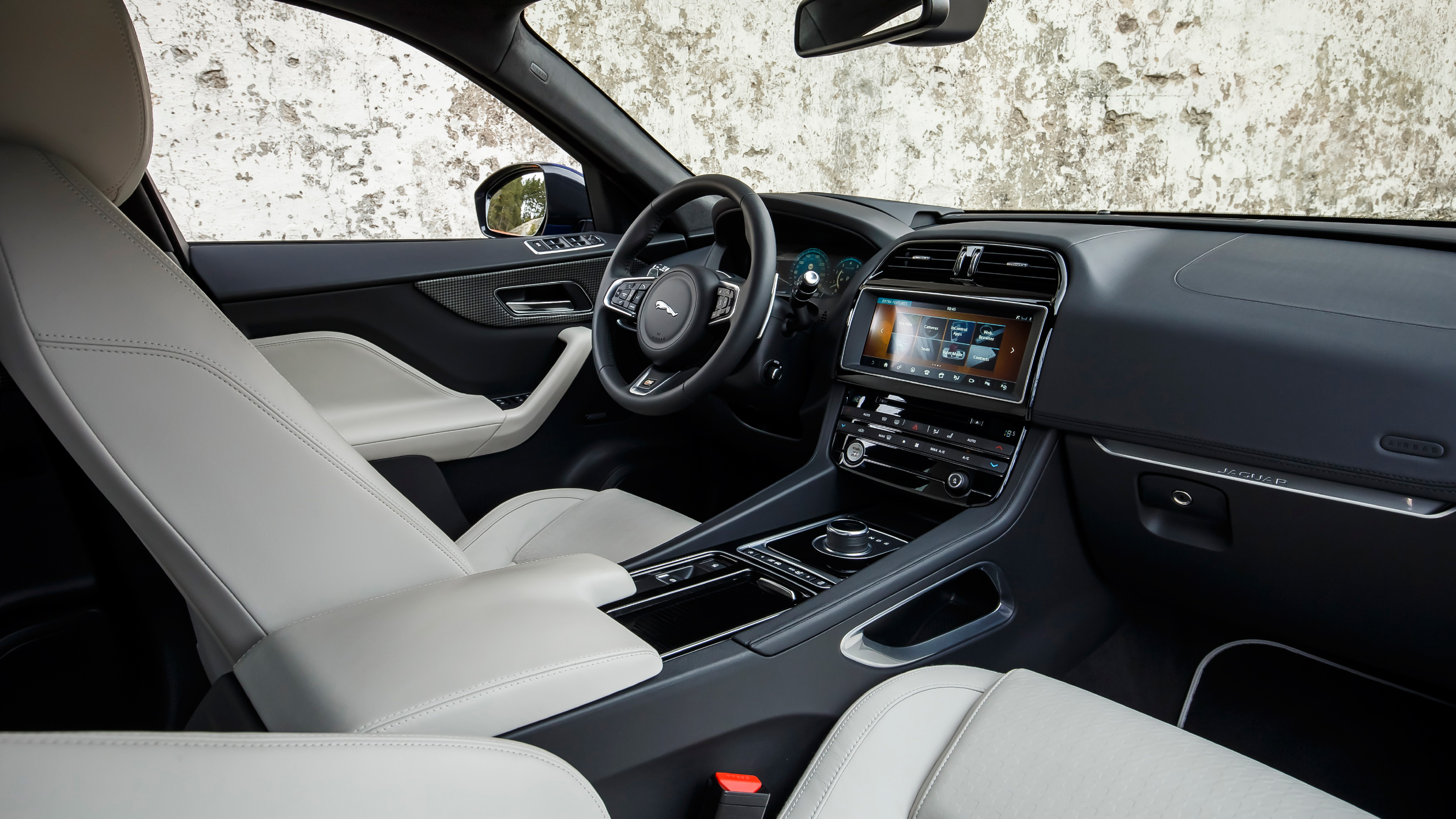 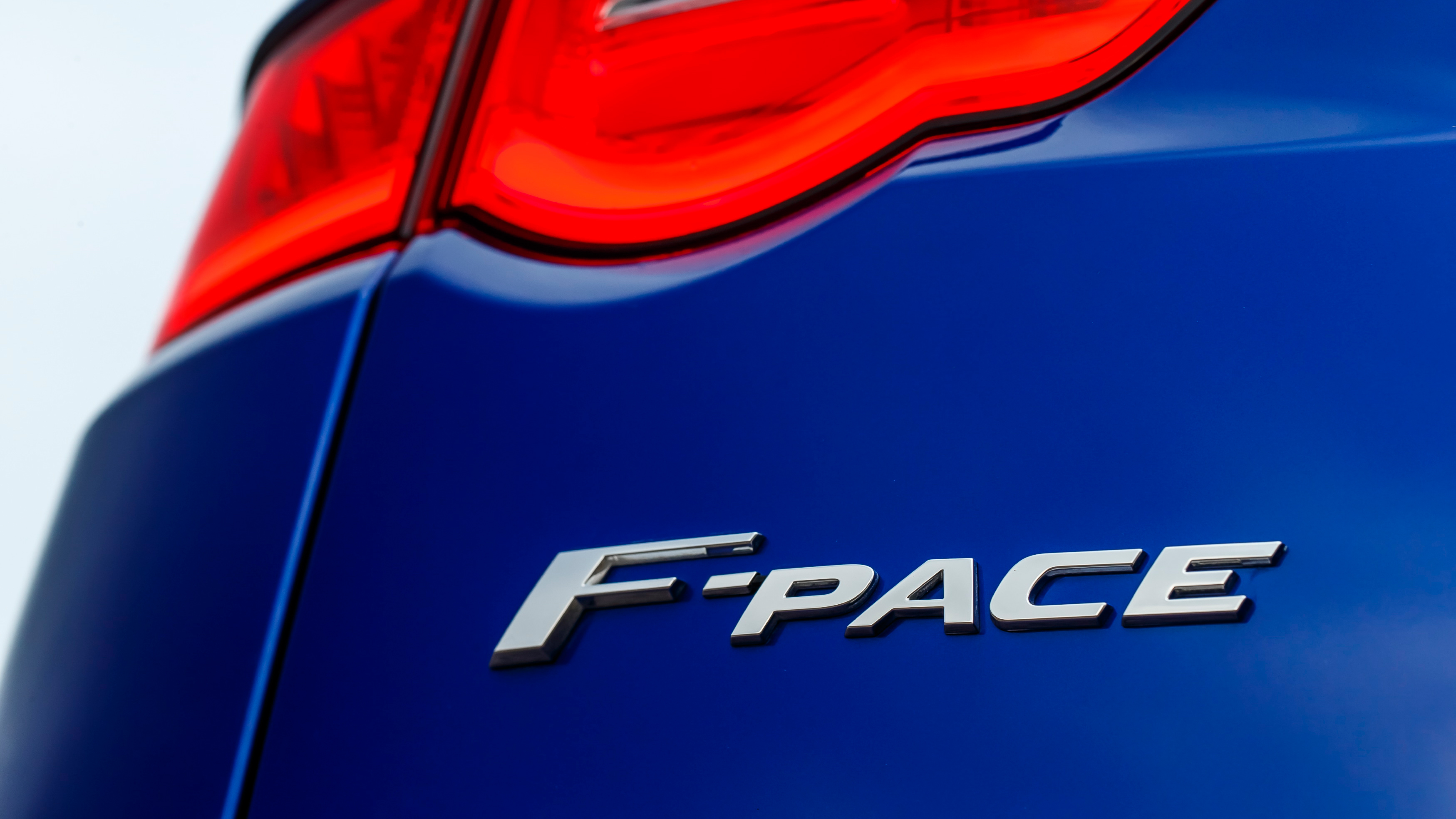 Anything else that’s new?

Yep, the infotainment system is a triumph. Entry-level versions come with an eight-inch InControl Touch system, but we’d go straight for the InControl Touch Pro system that adds a wonderful 10.2-inch touchscreen with razor-sharp graphics, does away with buttons all together and operates as intuitively as an iPad. Why Jag doesn’t just charge a thousand pounds more across the board and fit this to every model in the range is beyond us.

And there’s more, because behind the wheel is a digital 12.3-inch instrument cluster that can be configured with a variety of themes or set to full widescreen navigation (a bit like in the Audi TT). There’s also an app that lets you remotely start the engine, preheat the car and check its vital statistics, plus a waterproof bracelet ‘key’ that lets you do outdoorsy things while your actual key fob is locked safely in the car.

Absolutely. What the F-Pace smacks of is a company that’s studied the market, listened to its customers and delivered a product that people are screaming out for. It’s fast, but not backbreaking, tall enough to peer over traffic and just about tough enough to deal with some light excursions off-road.

It’s spacious, too, and – something I haven’t mentioned yet, but perhaps the most important point of all – it looks fantastic. For me, it’s the best-looking SUV out there. If this doesn’t become Jaguar’s best-selling model ever, I’ll be stunned.