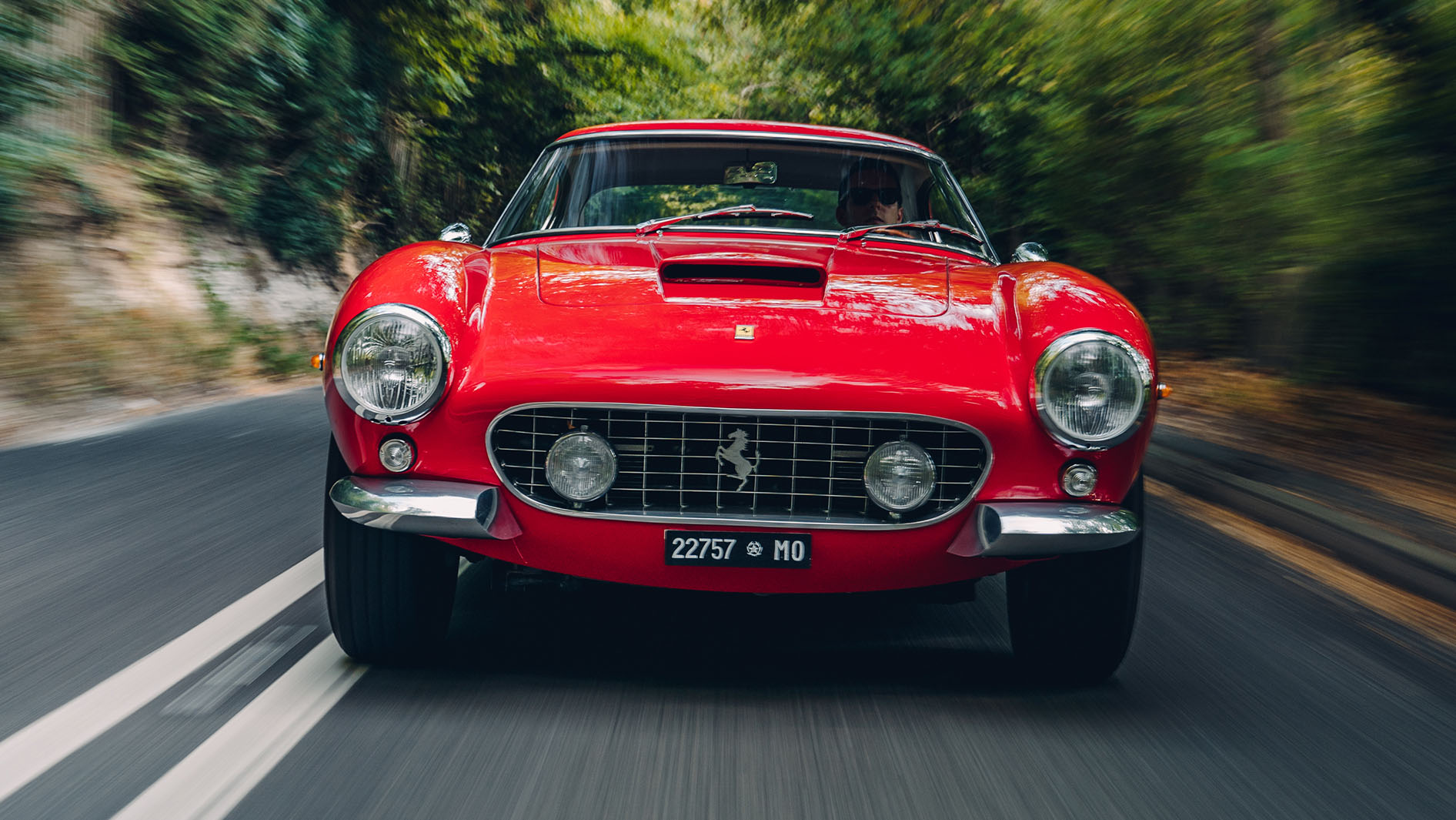 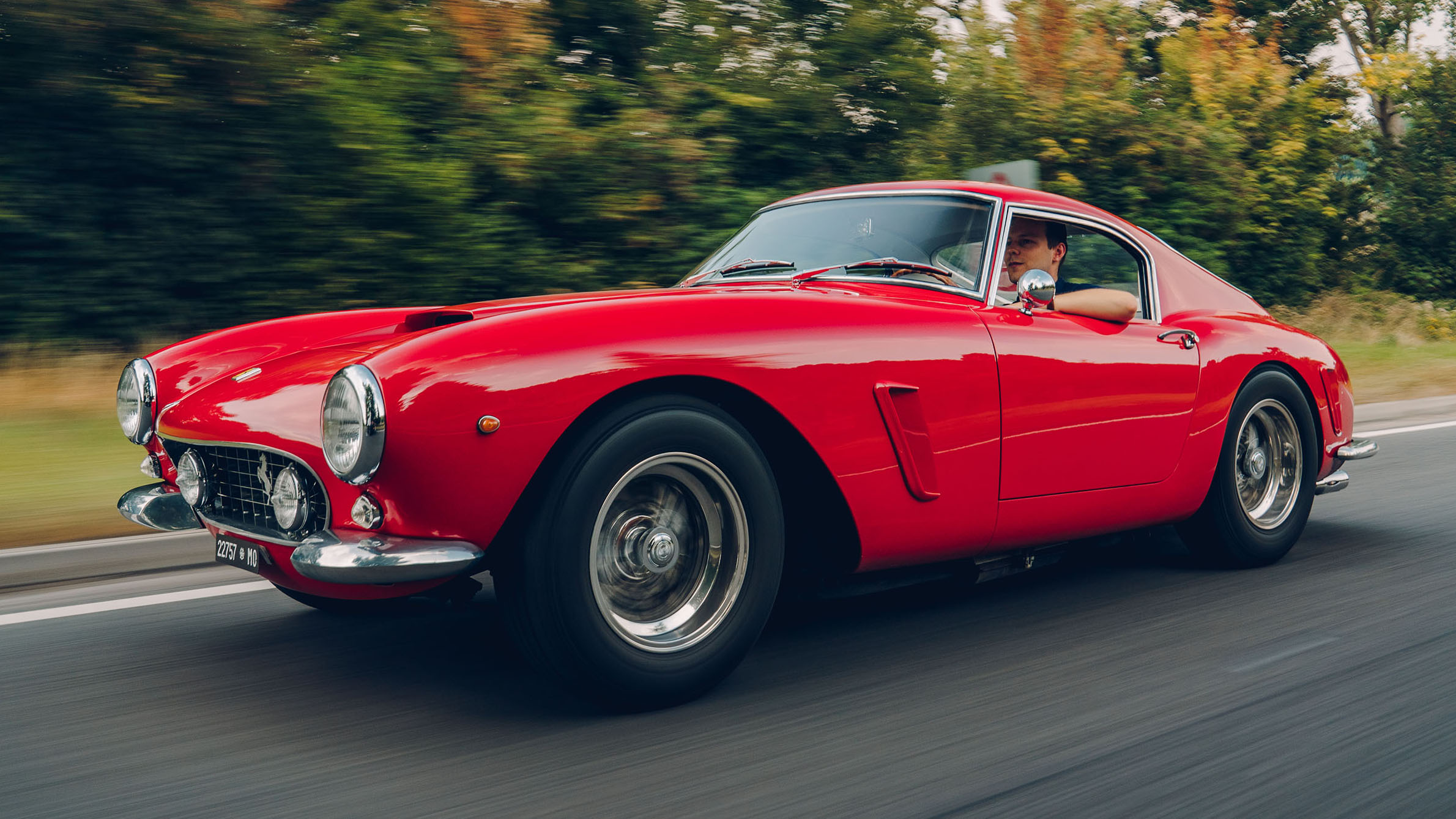 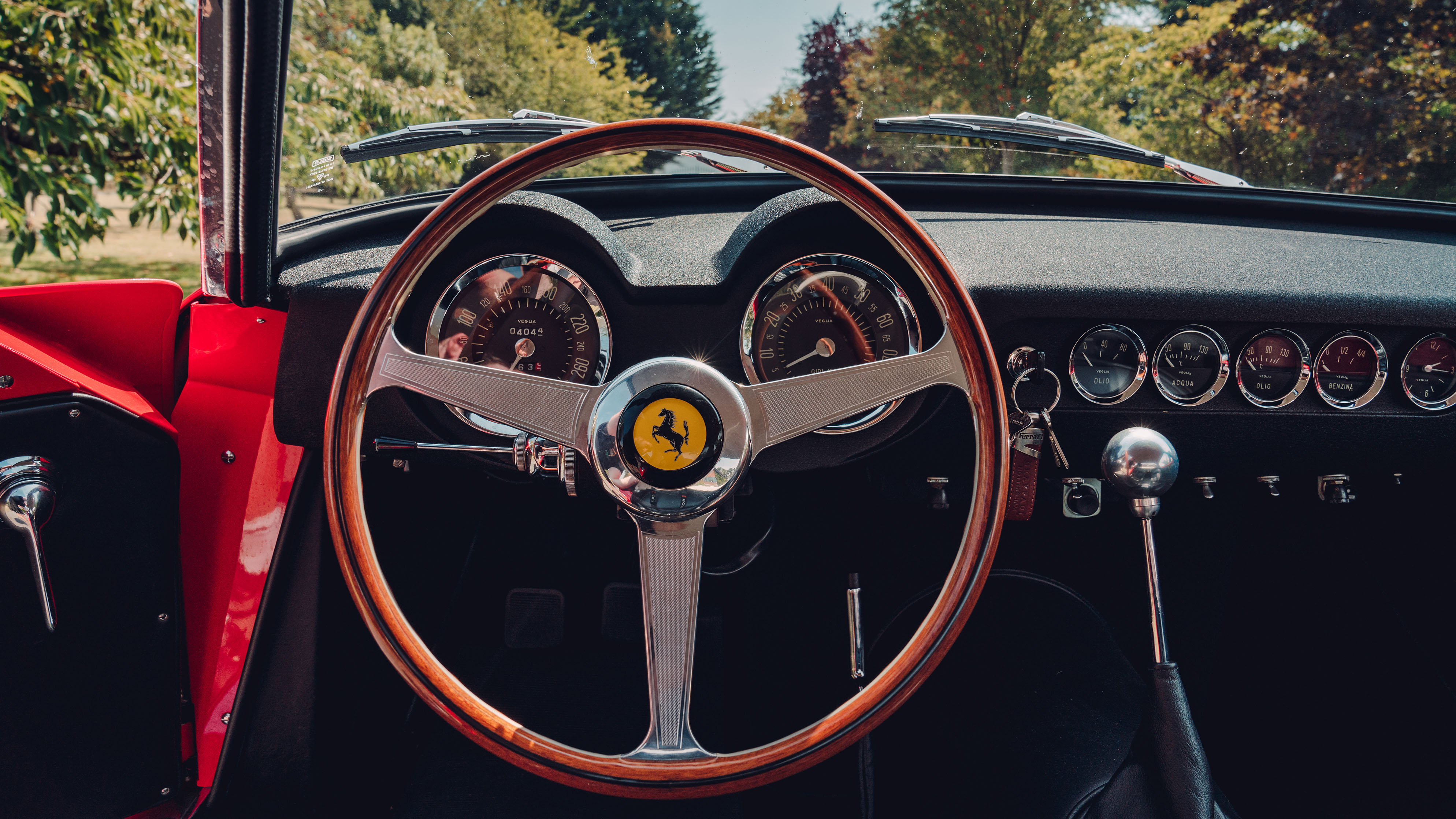 Ah, the simple joy of starting a V12 with a key. Twist the little dashboard ignition a half-turn clockwise, then push it into the barrel. The engine doesn’t hesitate. It idles smoothly, the rev counter staying put at 900rpm rather than rising and falling like a conductor’s baton. The handbrake lever, warmed by the transmission right next to it, lies in the footwell. Don’t forget to disengage that.

Find first gear. That’s challenge number one. This car doesn’t have anything complicated like a dog-leg first, so it’s just a case of giving that big alloy ball a deliberate shove to the top-left, until you feel the tall wand that plunges into the floor (through a leather gaiter, not an open-gate) slot home.

It’s not a lightweight, delicate shift, this. It takes a bit of spittle and heft to engage. This sets the tone for the 250 SWB revival. You’ve got to roll up your sleeves, stop fretting about the value, and bloody well get stuck in.

Weighing just 1,050kg – that’s about the same as a modern Mazda MX-5 – the SWB rolls away without any throttle, with just a lift of the weighty clutch. The biting point’s a little high, and combined with the ‘relaxed’ seating position, pulling away smoothly is mainly luck and guesswork until you and the car start to understand each other.

Once you’re off and underway, the SWB is tractable and torquey. In this tune, the triple-carb Columbo V12 is delivering about 320bhp, and it’s geared for 150mph flat out with 0-60mph doable – with a couple of deft gearchanges – in six seconds. Once it’s warm, it’ll haul from a crawl in third gear, if you need a break from those deliberate, chunky-feeling shifts.

Brakes are discs all round – the 250 was the first Ferrari to boast such cutting-edge tech – and need one heck of a squeeze. However, if you’ve had your Weetabix and can tread on the pedal hard enough, the stopping power is actually pretty decent – there’s none of those ‘oh heavens how will I explain this to the boss’ moments of dread as you apply the anchors and nothing appears to arrest your forward momentum, as in quite a few period motor cars.

But here’s the thing. The first few miles in a 250 Revival give you that same sense of anticipation that you get watching the warm-up band in the front row of a stadium gig. You’re appreciating what’s going on. The impossibly slim steering wheel is alive and jiggly in your palms, the shift has warmed up nicely and you’ve one eye on the ‘Olio’ gauge, awaiting the moment the fluids are up to temperature, the road unfurls itself ahead, and you can, at last, bury the throttle and see what a 3.5-litre Ferrari V12 built to modern spec is really like.

Problem is, the words don’t really exist. Transcendent? Life-affirming? Try ‘un-be-flipping-lievable’. I know the old Enzo quote along the lines of ‘you buy a Ferrari for the engine and I give you the rest of the car for free’ is a cliché, but by heck does it ring true here, as the revs climb through the barrel-chested, bassy mid-range and zing towards 7,000rpm with an operatic mechanical fury. That’s a million-quid engine note all day long. Though the numbers say this thing would struggle to keep up with a Golf GTI, the sheer intensity of the V12’s crescendo make it feel like a rocketship.

Then you start to get into a flow with the 250. Half an hour ago, you’d have auctioned your least favourite limb not to stall it – now you’re blipping the gas on every gratuitous downchange and revelling in the traction as the car squats down on its haunches out of every bend.

The steering is a curious blend – there’s lots of play just off centre, then a whole load of sinew-straining weight beyond it, but the 15-inch tyres (narrower 16s are actually standard) claw confidence-inspiring grip from the road, so the SWB can be leant on, and depended on.

This car had the optional faster steering rack and smaller steering wheel, and frankly I wouldn’t have wanted the steering any slower, or the wheel any larger. Driving it is a workout, a challenge, and a real partnership. And the result is one of the truly great bucket list ticks.