£ 21,520 when new
Pat Devereux
Published: 22 May 2013
comments
Skip 1 photos in the image carousel and continue reading 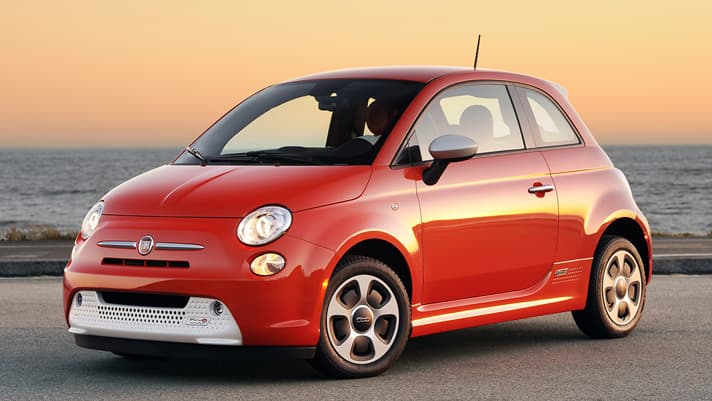 Is that what I think it is?

Depends. If you think it's the new battery-powered FIAT 500e, then you're absolutely right.

What so special about it?

The 500e might not look that different on the outside - indeed, they only changed three panels in the floor to make the e version - but on the inside and under what used to be the boot, there's loads of changes. First obvious swap is instead of the petrol engine there's a 83kw (111bhp equivalent) electric motor. Instead of the petrol tank there's a 24kWh battery. The gearlever has been deleted in favour of some push buttons and the central dials are now like something from the USS Enterprise.

How far can it go on a charge - and I mean really go, not what the brochure says?

Good question. FIAT reckons it'll do 87 miles on a single charge, but that doesn't factor in the amount of energy the car can recover while braking. On the test route we drove the range went up and down depending on the road speed and geography - the car calculates range based on current and recent past driving patterns. But by the time we had finished the hilly 50-mile there was still around half of the charge left. So say nearer 100.

And how long does it take to charge?

Four hours with a level 2 charger; almost 24 hours with a regular US 110-volt supply. That translates to 10 miles of range per 30 mins using the L2 charger and 10miles every three hours using the normal supply.

That's enough of the technical stuff, what's it like to drive?

Excellent. Other than the Abarth models, this has to be the pick of the 500 pack. It might weigh 600lb more than a standard petrol 500, but FIAT has distributed the weight so well, you don't notice it much. The 500e is now 57:43 front/rear instead of the petrol cars' 64:36, and it feels like it. Combined with the 200Nm available from 0 (zero) revs and no gears to bother with, this is one of the all-time best city cars ever made.

Really? It's that good?

Yep. There's just nothing to worry about other than having fun. And maybe where the next charge is coming from. Even the brakes feel like regular brakes, even though, above 8mph, it's all done by regeneration, not using the discs.

Rear seat space is reduced a couple of inches thanks to the batteries and charger, but since when did anyone expect any human to ride in the back of a 500? So that's not a problem. On the plus side, a detachable navigation unit programmed to show you the nearest charging stations and available range comes as standard. As does free membership to a Enterprise rentacar scheme that gets you 12 days of hire car action for every year you own the car.

Sounds good so far, how much does it cost?

The headline price is $32,500, which already includes a $10,000 per car loss FIAT makes on each one that's sold. (They wear the loss as it gives them clean air credits they can use to keep selling guzzlers such as the Viper and other SRT models.) But you won't pay anything like that. First the US government chips in a $7,500 discount for driving a battery-powered car. Then California throws another $2,500 into the pot. Fiat then adds another $2,500 incentive, which leaves it at around $20k.

OK, I want one

Great. But unless you live in California, you won't be able to. There are plans to look at other markets outside of the Sunshine State and the US, but until the company can justify the price against a credit elsewhere, it's unlikely you'll be seeing one anytime soon. Plus, Californians are already going crazy for them, so it'll be a while before that demand is met.