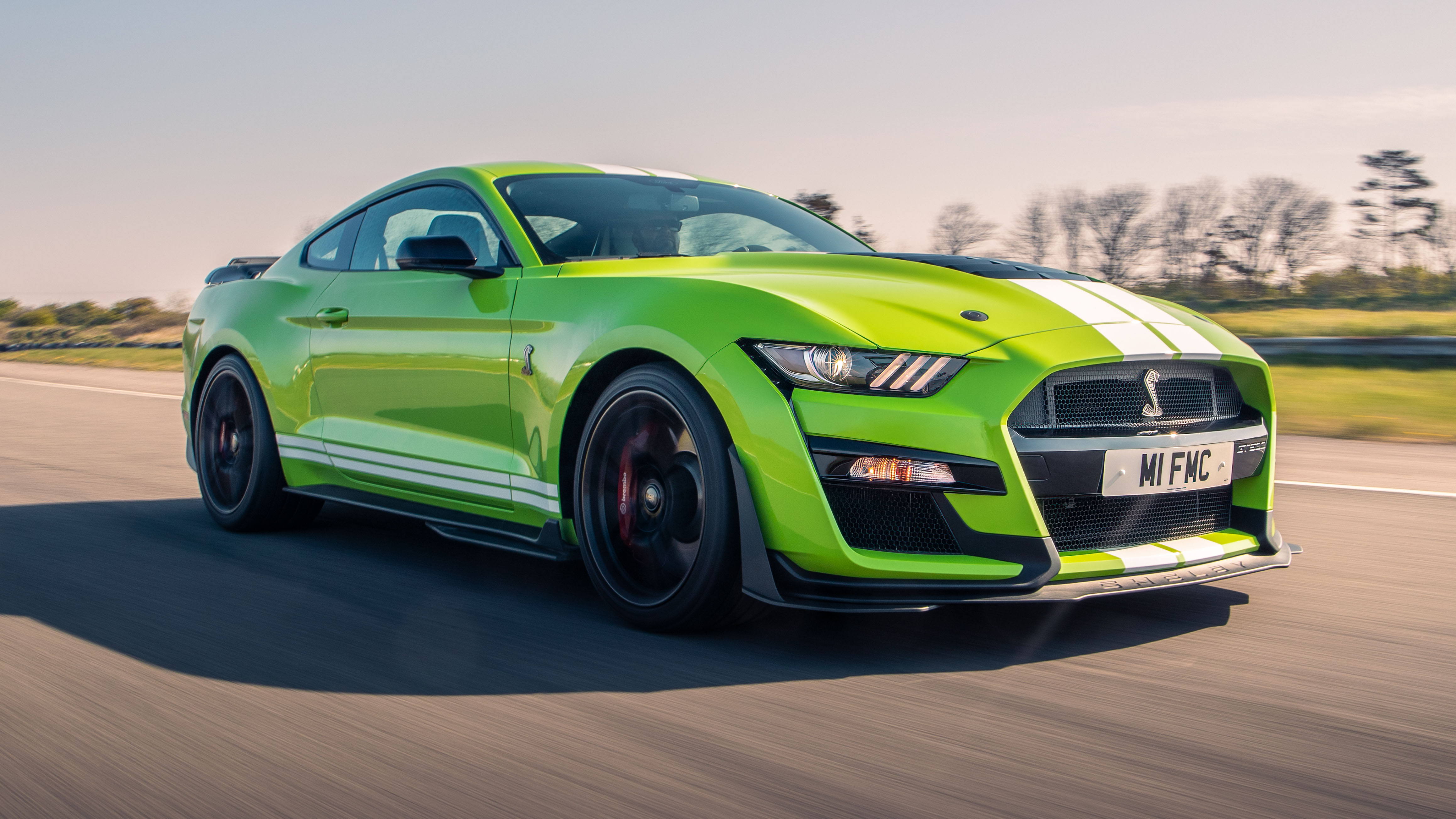 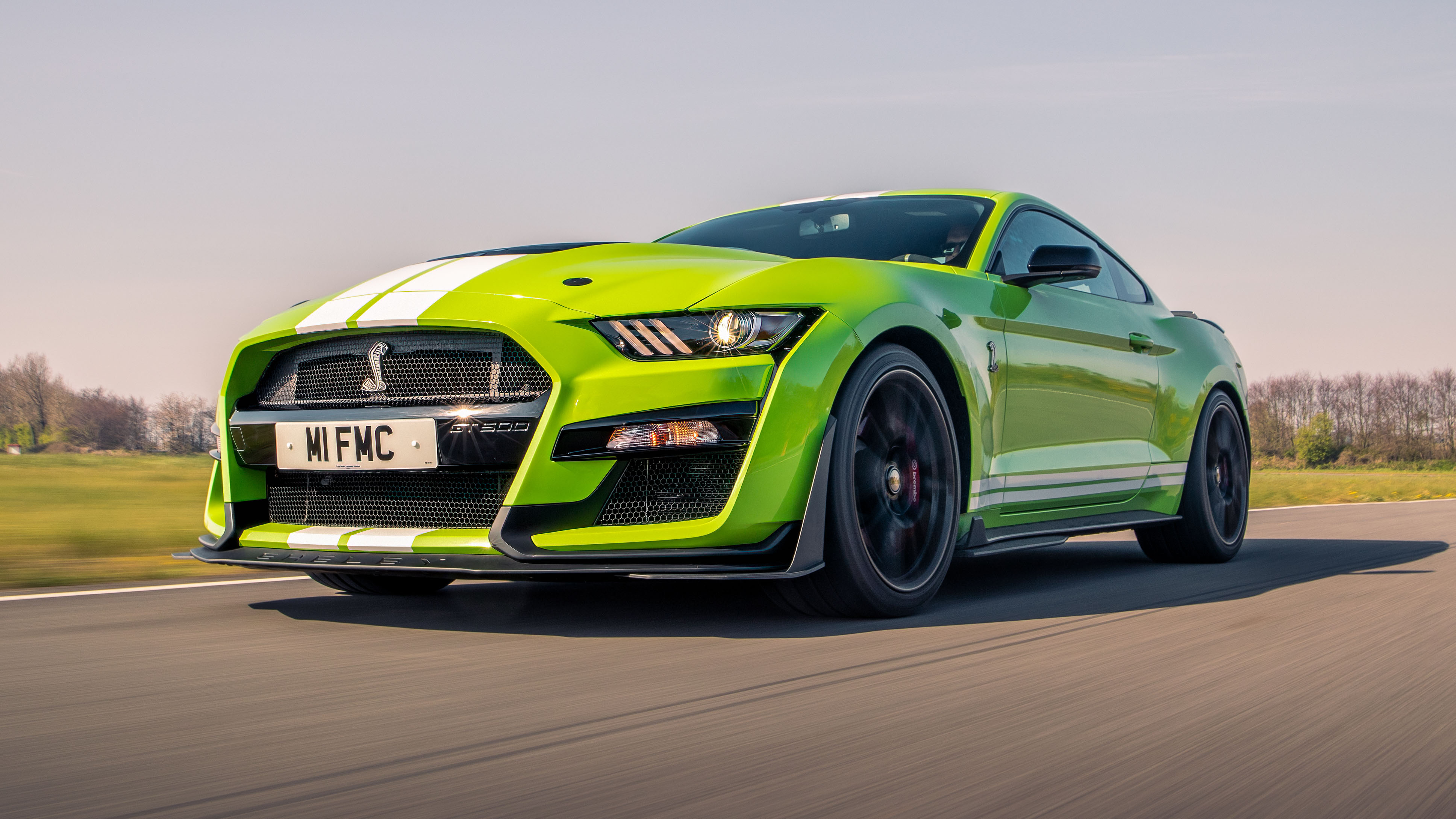 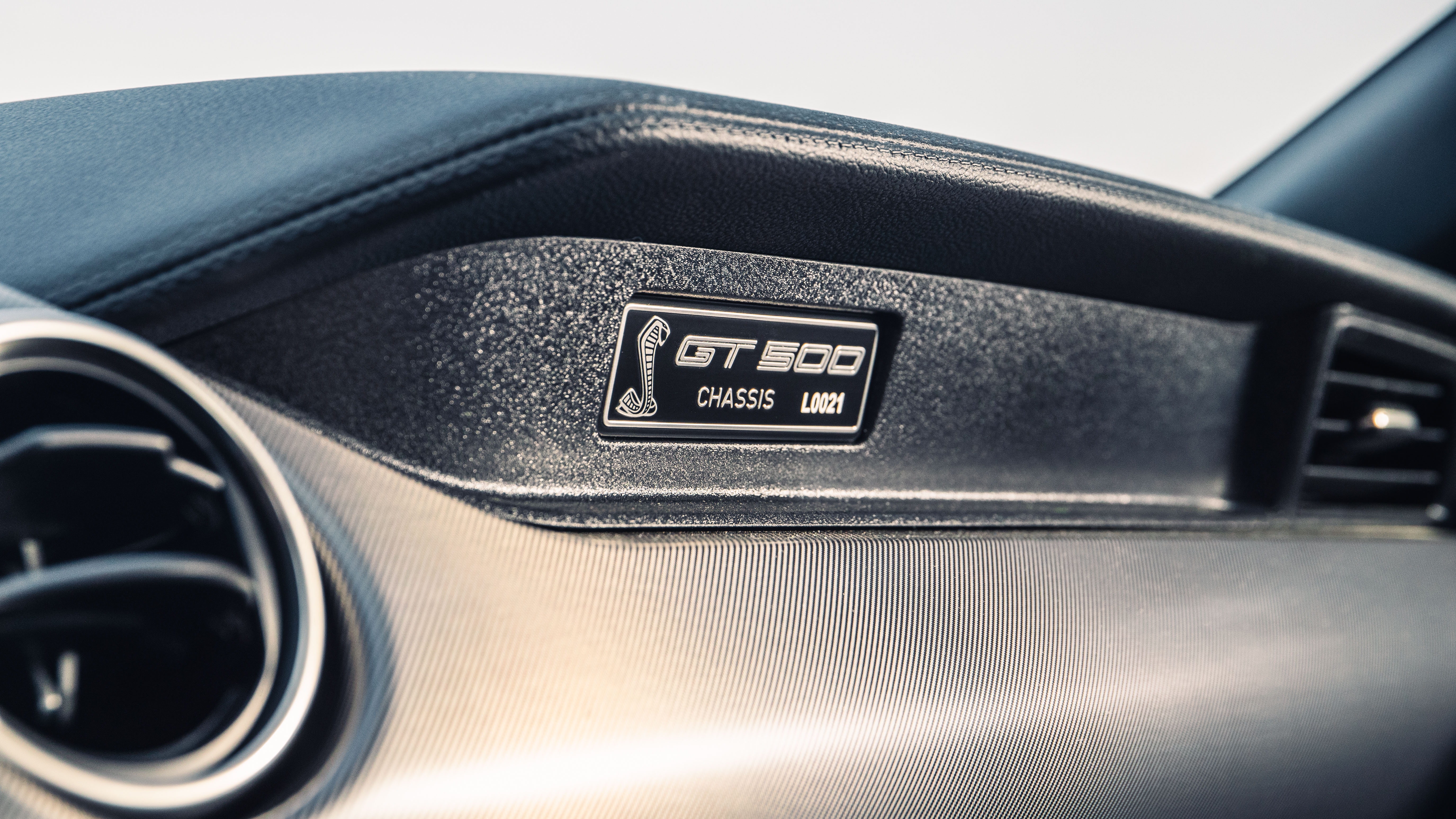 What is it? It looks angry.

This is the Ford Mustang Shelby GT500. A car that we’ve tested in the US, but never on UK soil. We’re big fans of even the standard Ford Mustang, a car that combines gentle attitude and some real handling ability. But what we have here is more … motivated. A rear-wheel drive, seven-speed DSG Mustang with MagneRide active suspension and a great deal of know-how wound into it, powered by the ‘Predator’ 5.2-litre V8 wearing a 2.65-litre Roots-type supercharger as a hat. A supercharger that, at full chat, takes 90bhp just to get it going. Together, they produce 750bhp and 625lb ft or thereabouts, maxing out at 7,500rpm. It takes just three-and-a-half seconds to reach 62mph and has a top end of 180mph, managing those acceleration figures while still tipping the scales at nearly 1,900kg - and there’s a slight feeling that it weighs a bit more than that. Still. Quite the thing.

The shade you see here is called ‘Grabber Green’ and it’s as much an assault on your eyeballs as the rest of the car is on your other senses, seeing as this is one of the loudest roadgoing production cars Top Gear has ever tested. Even the ‘Quiet Mode’ on the switchable exhaust isn’t, and the irony of having a ‘Track Mode’ which is unsuitable (as in, too loud) for actual tracks isn’t lost on us. There’s a seven-speed paddleshift - there is no manual option - and various modes. It’s probably fair to say that this is not the ‘enthusiast’s choice’  - that would likely be the 8,500rpm-revving, flat-plane crank (GT500 is cross-planed), manual GT350 - but in terms of out-and-out theatre, the GT500 is the boss.

I guess we’re talking a LOT of money, then?

This is where it gets awkward. The GT500 is basically national jealousy in car form. Mainly because in the US, a ‘standard’ GT500 will cost just $72,900 (or just over fifty two thousand pounds at current exchange rates). That’s ridiculous value given the capability and drama-slash-fun on offer. There’s an optional $18,500 ‘Carbon Pack’ for it that makes it even more singular, doing away with back seats and adding a bigger rear spoiler and weight-saving carbon wheels, plus replacing the stock Michelin Pilot Sport 4S with super-sticky Cup2 tyres. But even that can’t dent the bang-for-buck on offer. Don’t forget though that importing one to the UK will never be a case of bringing one over for the same money plus a bit of travel costs; it’ll cost a wedge more in VAT and import taxes. Remember: US fuel is still relatively cheap, and superchargers of this size are not particularly frugal. You’ll get 18mpg if you’re very, very careful on a run; on track we averaged 3.6. It won’t be produced for right-hand drive markets, either, so that’s worth taking into consideration, because no matter how comfortable you are with LHD, it can be a little bit annoying.

Ah. The old recipe of brawny US muscle that feels a bit cumbersome in the UK, then?

Yes. And no. There’s no doubt that the GT500 feels American, but that’s in no way a problem. It also feels fairly big (and LHD), and thick. There’s a heft to everything, from steering to brakes, and that huge bonnet bulge is both evocative and adds to the feeling of mass. It’s also remarkably comfortable - wind it right back into the ‘comfort’ modalities, and this is just a big gunship of a thing, more than capable of huge distances without being unduly irritating. Yes, the wildly loud exhaust can get a bit droney at motorway speeds, and it is fairly unapologetically inefficient, but I’m not sure you’d be buying one of these thinking it would be quiet and frugal. Go and buy a European hatch for that.

Down a B-road, you never forget the width, but it’ll cope with bumps, ties itself down with surprising ability. This isn’t just an engine with a Mustang attached, because where the motor asks lots of pointed questions, this is a chassis that has answers. It won’t ever be quite as joyous as it could be down a small-ish road, and Track mode on the suspension causes it to actually bounce, but there’s a sweet spot on a larger road and in some of the settings that makes this import frankly, incredible. It’s different to European offerings, yes, but that doesn’t make it worse.

What happens when you really let it go, though?

Well, to be fair, the GT500 has the kind of performance that’s best appreciated on a track. So that’s where we took it, after several hundred miles of road work. And that’s a transformative moment - because the last 3/10ths of the GT500’s throttle needs space. And very possibly wipe-clean seats. The throttle pedal itself is quite long, but push it all the way to the floor and the GT500 whistles a little from the ‘charger - a noise soon overwhelmed by the fraught, raw opera of the exhaust - and then sods off with some aggression. What was a noisy but largely comfy bus suddenly rears up slightly and starts to yank the horizon backwards through your eyeballs at 7,500rpm. If you’re even the tiniest bit a petrolhedonist, then you’ll laugh. Then possibly go very quiet as you concentrate.

Be an idiot with the traction control off, and yes, you’ll just fry the rear tyres and not really move anywhere. But be a bit more careful and this car is supercar fast. It’s not the last word in precision, but there are some very talented people doing chassis work, and it shows. There is still pitch, roll and yaw, but it is well-contained. Where the ‘box was lazy, it is now attentive and snappy, and there’s really remarkable grip from both ends. Just for reference, this car is wearing 305-section front tyres and 315 rears - and they do a lot of work. Not inexpensive. But when there’s a straight long enough, that motor drags the car up through the speedo and rev counter like a nitrous-fed steam train. Even with the non-Carbon Pack car, lap times on any track with a couple of decent straights would be moderate supercar quick.

Sounds amazing - what’s wrong with it?

Well, to be fair, the GT500 is never really subtle. It’s always ‘on’, and that can be a tiny bit wearing. From the noise to the paint, you go nowhere quietly. Of course, you probably knew that when you bought it, but still. It’s also a little bit chintzy inside, with some toggles and switchgear that operates well, but feel a tiny bit cheap. The seats are big, squishy armchairs which are comfortable but could do with less padding (something the Carbon Pack addresses) and the left-hand driveness of it can’t be ignored. You have all the ability for safe and precise overtakes, and yet you have to hang quite a lot of the car out into the other lane to make sure of sightlines. Which is quite obviously not the car’s fault. The thing you keep coming back to is the sheer value of this thing in the US market, though. And the fact that it’s not just a blunderbuss. All very well dismissing it as an anachronism, but there’s real talent in this package, and it’s the kind of car that got us into cars as children. Silly, noisy, fun. You’d need to be very well-off to run one in the UK, but supercars aren’t exactly parsimonious, and there are plenty of them around. The other supercar-ish thing about it is that you really need to take it to a track to really exercise this horse, and then it all gets a bit complicated. A dedicated trackday car or lightweight will slice it open in corners no matter how good it is, and it’ll be heavy on brakes and tyres. A slippery supercar will also likely have it above 140mph. But it depends what you want out of a trackday. Ultimate laptimes possibly not. Big heart, ultra-high-def fun? You’re sorted.

In fact, the only thing really wrong with this car in absolute terms is the fact that we can’t buy one here for the money they pay in the ‘States. Car-people over there are crying out for the Toyota GR Yaris, so we suggest some sort of exchange programme.