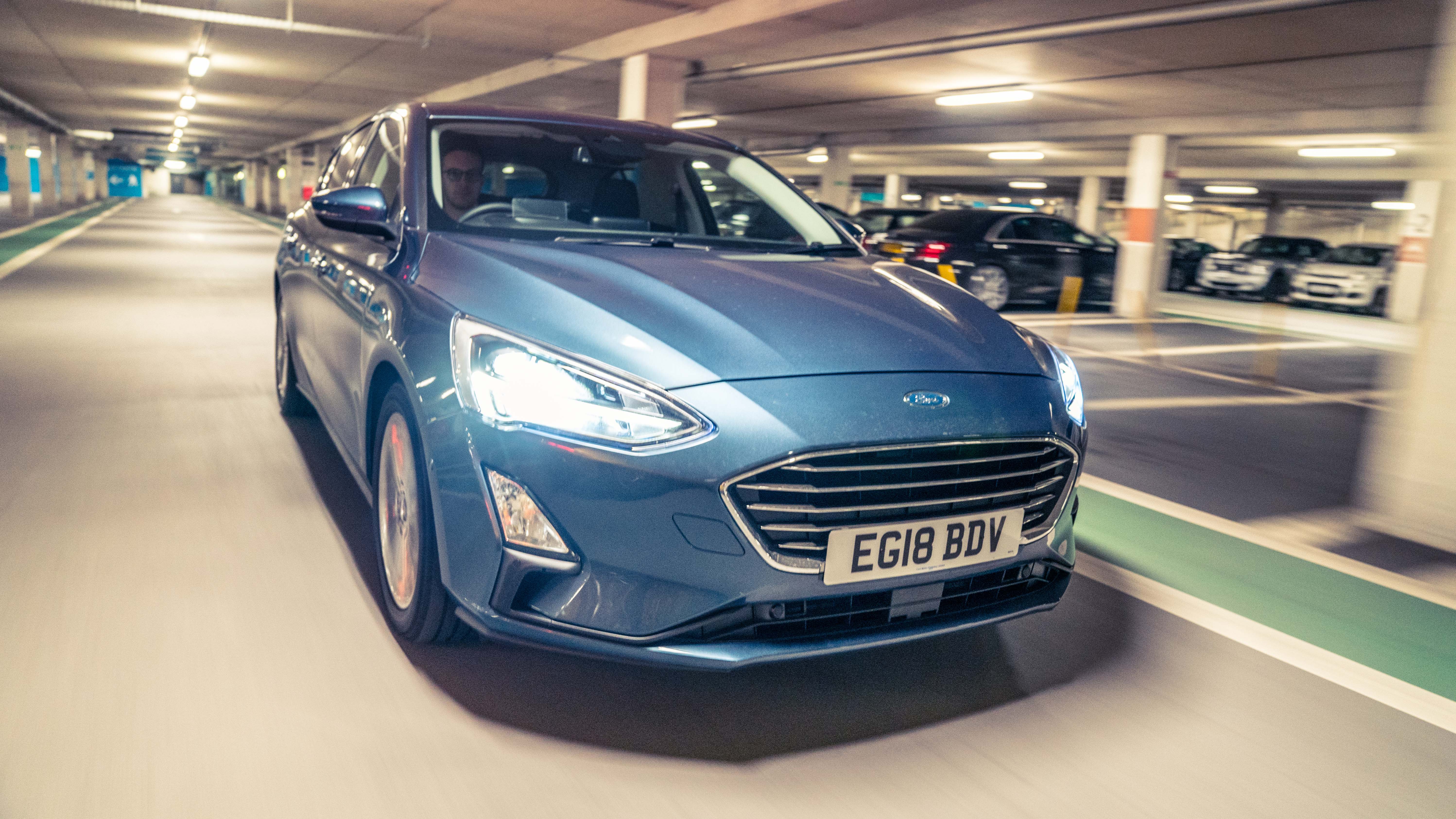 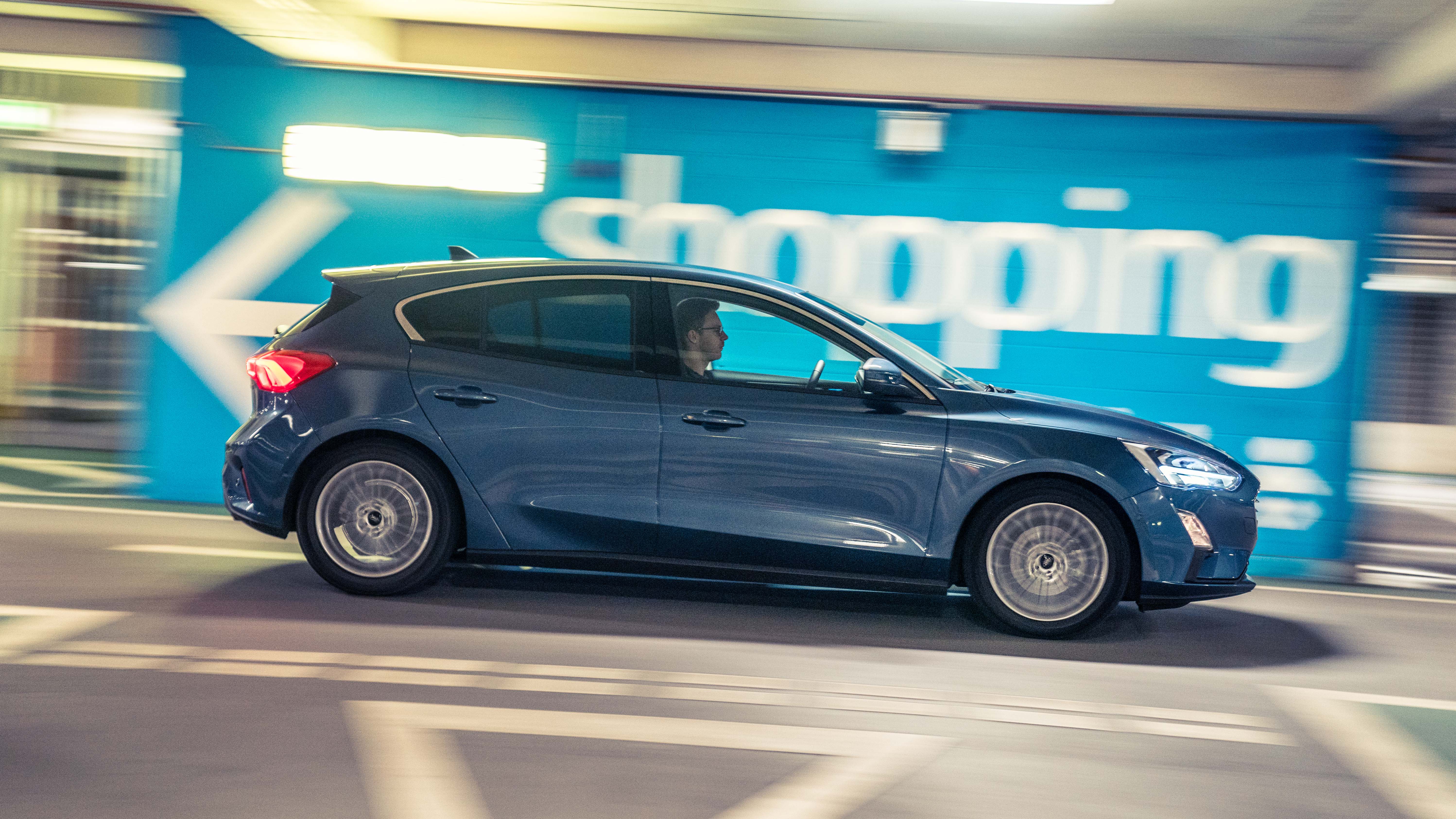 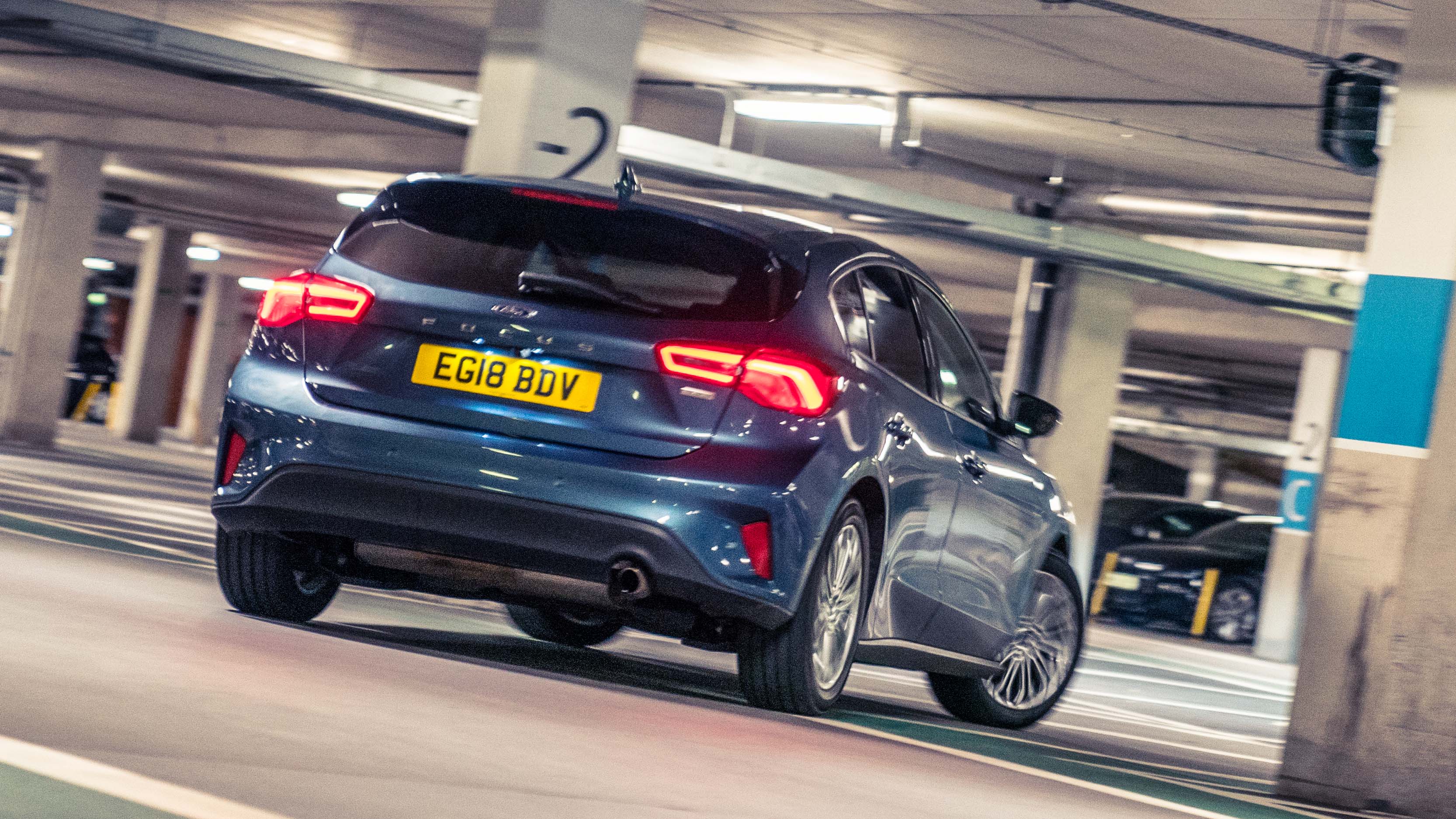 Ah yes, I’d heard there was a new Predator film on the loose.

Still, the last Focus was ugly. Ford hasn’t made a good looking one since the original twenty years ago. It’s not stopped the hatch regularly soaring into the canopy of Britain’s car sales charts. What we’re here to decipher is if the new one, in a very Britain-appropriate spec, is as likeable on UK roads as it was in the south of France.

Which is what exactly?

Titanium X trim isn’t just the brace-face. It’s part-leather heated seats with electric adjustment for the driver. It’s a 4.2-inch colour screen between the instruments that’s crammed with clearly laid-out consumption data and the like, and a 12.3-inch ‘SYNC 3’ main touchscreen that contains digital radio, Apple CarPlay and Android Auto, and Ford’s own sat-nav – but annoyingly, only when your smartphone isn't connected.

Tinted glass, parking sensors, automatic lights and wipers and twin-zone climate control is also thrown in, along with the increasingly familiar anti-crash and pedestrian-sensing safety guardians.

With a 123bhp 1.0-litre petrol engine and manual gearbox, it’s £22,820. Or about £270 a month on a sensible lease deal, more relevantly. Oh, and this here test car with its LED headlights, heated steering wheel, wireless smartphone charger pad and head-up display was optioned to beyond £26,000.

Give me a quick kit breakdown.

The HUD (£400) is a cheapo pop-up window job (a la Mini and Mazda) rather than actually projecting onto the windscreen (as per BMW and Mercedes). It’s clear and comprehensive, but when the instruments are this clear, a bit of an indulgence. You’re better off spending £400 on the blind-spot monitor system, because the Focus, like the latest Fiesta, has curiously small door mirrors.

The £350 B&O Play hi-fi is terrific – powerful and detailed. Pity it had caused the drivers’ door trim in this test car to buzz itself loose.

Some of the trim in this high-spec car just isn’t good enough. The dashboard is blighted by a naff textured panel that looks like carbon fibre rendered on Microsoft Paint. On Windows 95. It’s grim. And Ford’s made the same error as on the Fiesta, covering the top of the dash (which you never touch) in plush leatherette, but fashioned the door handles and window switches out of cast-off Lego. Lovely supple leather on the steering wheel, mind, and the gear lever is festooned with cool metal.

This 123bhp engine then. Is that enough, in a family hatchback?

On paper, sure: Ford claims 0-62mph in ten seconds dead and 124mph flat out. Fine. This is actually the pokiest 1.0-litre triple in the new Focus, which can also be forced to make do with only 84bhp and 99bhp. You need the 1.5-litre three-cylinder to go quicker.

And yes, you do need it. Ford’s EcoBoosts are eager and this one idles uncannily smoothly (I tried to start it a few times while it was already running, which is the ultimate silent-running compliment), but the intergalactic gearing dulls the motor’s response to the point of feeling sluggish. Ford claims peak torque is released at 1,400rpm. Feels like it needs twice those revs to get moving, on the road.

Drive it four-up, as I did for a good hour, and it feels downright underpowered. As diesel capitulates, hoardes of torque-spoiled buyers will be swapping into versions like this, and they’ll get a nasty shock when their local motorway sliproad isn’t a simple surge and merge affair.

Slick as the six-speed gearbox is – and it’s miles more satisfying and less notchy than a VW Golf or Vauxhall Astra’s – an ST-line Focus with a 148bhp 1.5-litre engine is £22k, and will need less lever-rowing.

Very – despite needing to work those three cylinders hard. On the motorway, we saw over 50 miles to the gallon, and a best average of mid-forties is pretty strong, given how downsized engines can wilt under the pressure of real-world driving. The 1.0-litre engine also does without the cylinder deactivation trick of the larger 1.5 motor that’s borrowed from the Fiesta ST hot hatch, but manages to be just as frugal. Clever stuff.

It’s the best drive in the class, even on the cheap suspension, for sure. Focuses with this 1.0-litre engine have torsion bar rear suspension, rather than a properly independent rear set-up, but Ford’s engineers have borrowed the suspension design – if not its stiffness – from the Fiesta ST, which is designed to keep the relatively unsophisticated back axle’s wheels pointing straight as they accept cornering loads. As a result, the Focus feels agile, pointy, dexterous and actually quite playful. There’s a lot of Fiesta in its DNA, and that can only be a very good thing. Great basis for a Focus ST hot hatch, too. And you get a big boot on top of the torsion bar.

The steering is direct but quite glassy in response, and the ride’s actually quite soft at low speeds, so the first impression isn’t of a car that’ll relish some stick in the bends, but the Focus raises its game, maintaining its body control and riding with quiet suppleness. It’s easily the best driving boggo version since the original.

A good car wrapped up in an ugly body, then?

A really strong hatch in divisive clothes, definitely. Spec-permitting, this is a match for the best cars in the class – vastly improved inside ergonomically, sweeter to drive and uncannily refined. Less chintz and more poke would really play to the new Focus’s strengths.

The starter button, if you have keyless entry, is so stupidly placed it’s as though Ford did it for a dare. It’s hidden behind the steering wheel and angled to face the side window. VW doesn’t make mistakes like that. Neither does Kia. Or Dacia.