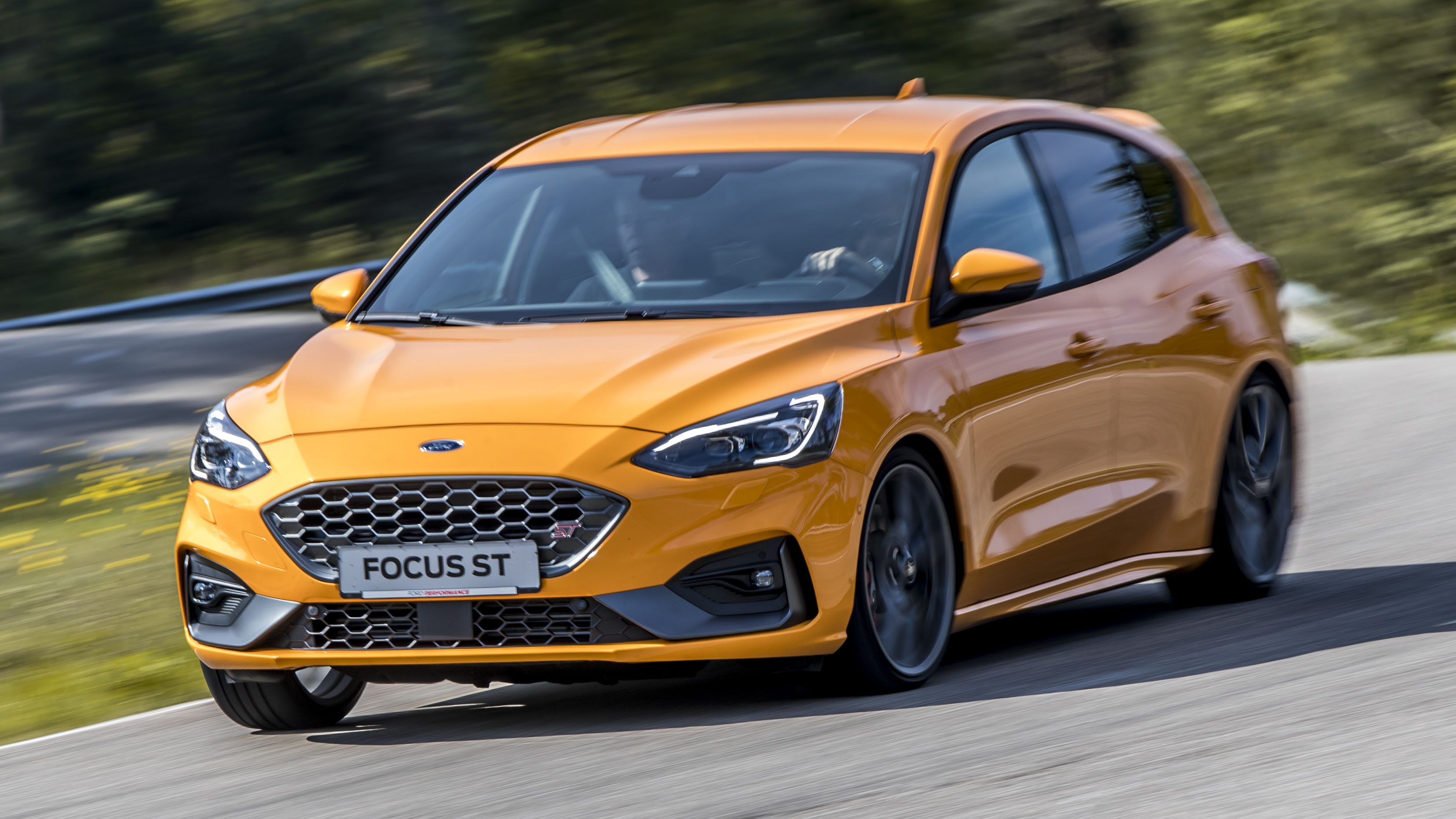 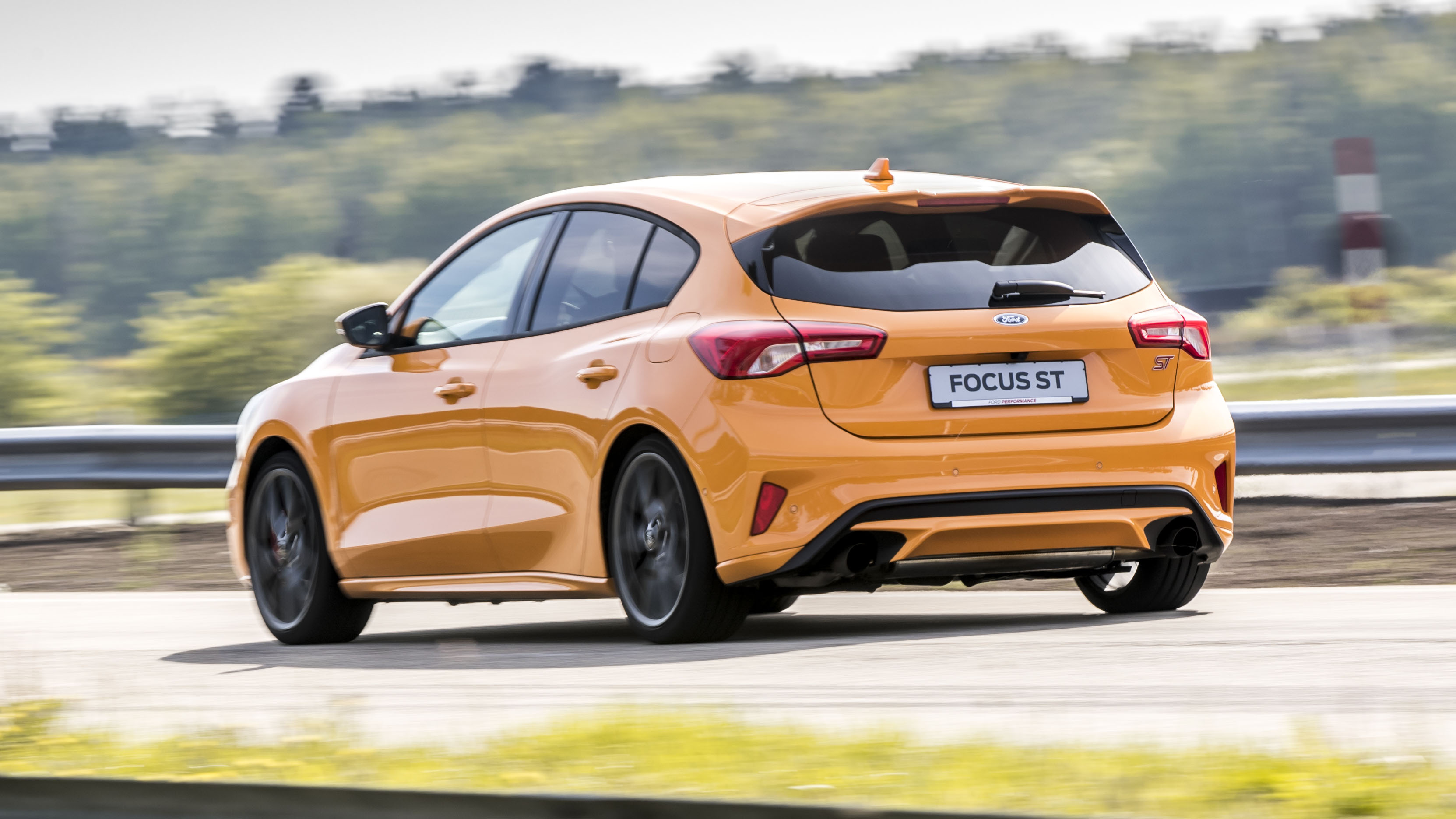 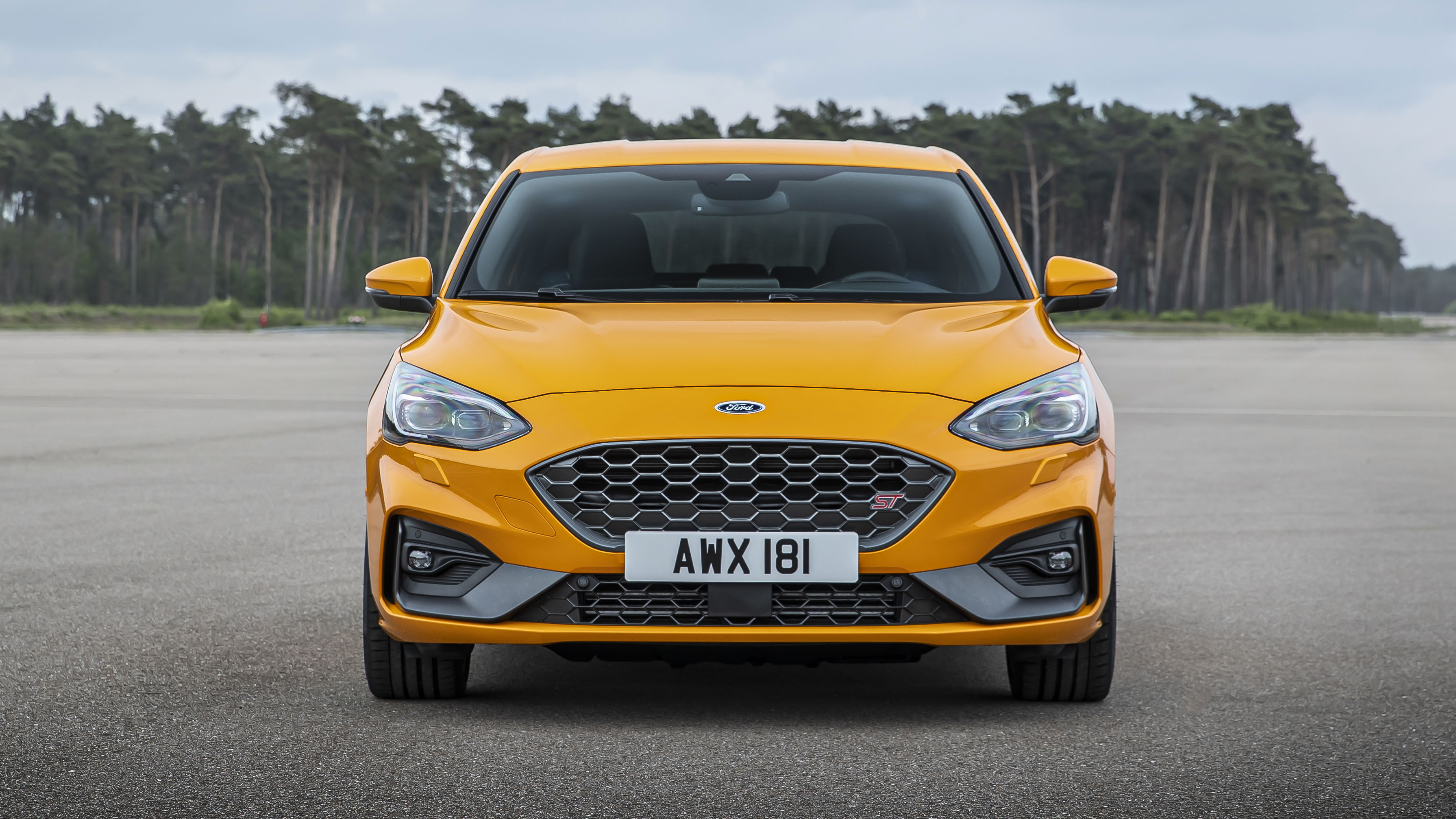 Aha, a fast Ford. Expectations nice and high then?

‘Fraid so. No pressure, Ford.

And it’s not just because we love the GT supercar and the likes of the Bullitt and GT350R Mustangs. Ford Performance is in a red-hot spot of hot hatch form. The drift-tastic old Focus RS was darn good, and the latest Fiesta ST is one of the best cars on sale today, full stop. It’s Top Gear’s 2018 Car of the Year, actually.

So, what’s new for its big brother?

Everything. This is a very different car to the unruly old Focus ST. It’s very sophisticated.

What’s so clever about a front-wheel drive turbo hatchback?

There are multiple driving modes. There’s adaptive suspension. An electronic limited-slip front differential. Trick bespoke tyres. You can spec a Performance Pack featuring a Track Mode, launch control, auto rev-matching and a little light to tell you when you change gear without dropping out of the boost zone.

If you want toys – and judging by the gadgets brandished by the likes of the Renault Megane RS, Hyundai i30N and so on, hot hatch buyers love their toys – then the Focus ST is bang on the money.

And what is the money?

It’s £29,495. Which is punchy. Folks are used to getting into a Focus for well under £25k. But a) inflation’s a b***h and b) there aren’t trim levels to trip over any more. Ford noticed that the vast majority of you ignored the basic ST 1 and mid-spec ST 2, and bought the ST 3 to enjoy bells, whistles and reversing cameras. So now, there’s one very well-equipped ST, and a very short options list. Stay tuned.

Looks-wise, it’s a bit limp. You can have handsome 19-inch wheels (18s are standard), and a squatter 10mm lower ride height do their best to distract from the new Focus’s inherent dumpiness. Fundamentally it’s not that much of a head-turner, because the bodykit is exactly what you get on the company-car spec Focus ST-line. A rather dowdy blue and Renault-spec orange are exclusive to the ST, though.

Inside, it’s better. The seats give a familiar ST squeeze to your kidneys and thighs, and you sit a good three storeys lower than any fast Focus you’ve clambered into before. The gearknob is stubby and half-metal.

The steering wheel is flat-bottomed but not over-chunky. And when you thumb the oddly hidden starter button, ST graphics adorn the screens. The engine settles into a restrained hum. It feels… Golf-ish. Which is a compliment.

Now go and drive it, please.

Today we’re confined to Ford’s test track at Lommel, in Belgium. So, if the Focus ST falls apart here, the engineers will be in a Transit to the job centre by lunchtime.

Immediately, this car does what the Fiesta ST does so well: it imposes its character on you. That character is cheeky, have-a-go hero.

That’s entirely deliberate. Ford told us as much when we had a passenger ride last month. Everyone loved the way the Fiesta immediately feels keen and agile and ready to play, so the mission statement for the Focus ST was to bottle that sense of humour and drizzle it all over the bigger, faster, more mature car.

Obviously, Ford has applied similar methods. Fast steering, for one thing. The Focus ST’s steering is pinpoint sharp and very accurate. The nose is hungry for corners, and as soon as you flick it into a bend, the rear axle feels mobile, ready to cock a wheel or, if you lift off, slide just a little, to trim your line.

That’s the key Fiesta ST trait that’s been successfully transplanted into the Focus. Mega-manageable fun when you want it, or rock-solid stability if you’re behaving. Immediately, it’s much more natural-feeling than the over-excitable rear-steer RS Megane, and you get more rewards and less insane speeds than in the mighty Honda Civic Type R.

Steady on, this isn’t the group-test.

True, but the hot family hatch sector is so talent-rich and closely contested right now. We’ll come to no final verdicts today, but for now, the ST feels most like a Hyundai i30N, only with better traction, a comfier ride, and crisper turn-in.

Comfy ride? But you’re on a test track?

Exactly, not a racetrack. Ford’s proving ground conceals more than just crests and bends and long straights to wind out the 276bhp engine. There are recreations of road sections from Florida, Paris, and even the craggiest British B-roads.

Ford’s team relishes the challenge of making its sporty models thrive on the worst roads the world has to offer – plenty of which are found in the natural home of the hot hatchback – Britain.

So, Top Gear verified their work by dialling the suspension up from Normal to Sport, and then punting the ST down the pothole test section, once or, ahem, five times.

And you didn’t shatter your teeth?

Gnashers intact. See, the Fiesta ST is boisterously firm at times. We love it, but your passengers or children may not, if you have what’s known as ‘responsibilities’. The Focus ST has adaptive suspension to counter that. In Normal mode, it’s almost plush. In Sport, it’s firmer, but the body control is sublime. And in Track mode, well it’s too firm for a road, as the name suggests.

Crucially, this rides with more bandwidth – a wider spread of moods – than the Fiesta. And the Renault, and Hyundai competition. The Honda is in another league for damping – it’s like a front-drive 911 GT3. But it’s also more money.

So: it looks okay, it’s oddly comfortable and handles brilliantly. Is it fast?

Quick enough, sure. The Focus ST is all about torque, because boss of Ford Performance Leo Roeks reckons torque is the key to a good hot hatch – lots of on-demand power, to match on-demand giggles from the chassis.

As a result, it has more torque than a Honda Civic Type R: 310lb ft, available from only 1,800rpm. Meaty. Power is a respectable 276bhp – bang on the rivals from Renault, Hyundai, about where the next Golf GTI will be, and deliberately less than the nutty Civic.

Shift cleanly enough through the slick six-speed gate and you’ll arrive at 62mph in 5.7 seconds. That’s 0.8sec quicker than the old ST, which suffered badly with torque-steer and axle-tramp. This one doesn’t. It’s composed. Sorted. Traction is epic. Most corner exits, you’ll tick yourself off for not being on the power two or three seconds earlier, and letting the electronic diff hook up and haul you cleanly from the apex. The motor revs out cleanly – it’s worthy hanging on for the high notes beyond 6,000rpm.

Does it make a good noise?

For a modern hot hatch, yup. It’s all there. Pops’n’bangs when you lift off, and a gruff growl as it accelerates. Ford’s tuned the sonics of the engine to prioritise burble inside the cabin, without the exhaust tripping over new anti-noise laws.

It’s fantastic. It’s exactly what an ST should be: approachable, quick, entertaining but leaving some blood’n’thunder in reserve for an RS. This will be, I’ll wager, a great car to live with – like a Golf GTI or Hyundai i30N.

There’s been a changing of the guard in the hot hatch deathmatch. Time was that Peugeot was unassailable for making super-duper shopping cars. For most of the last decade, it was Renault top of the three. Right now, no-one makes hot hatches of both sizes better than Ford.