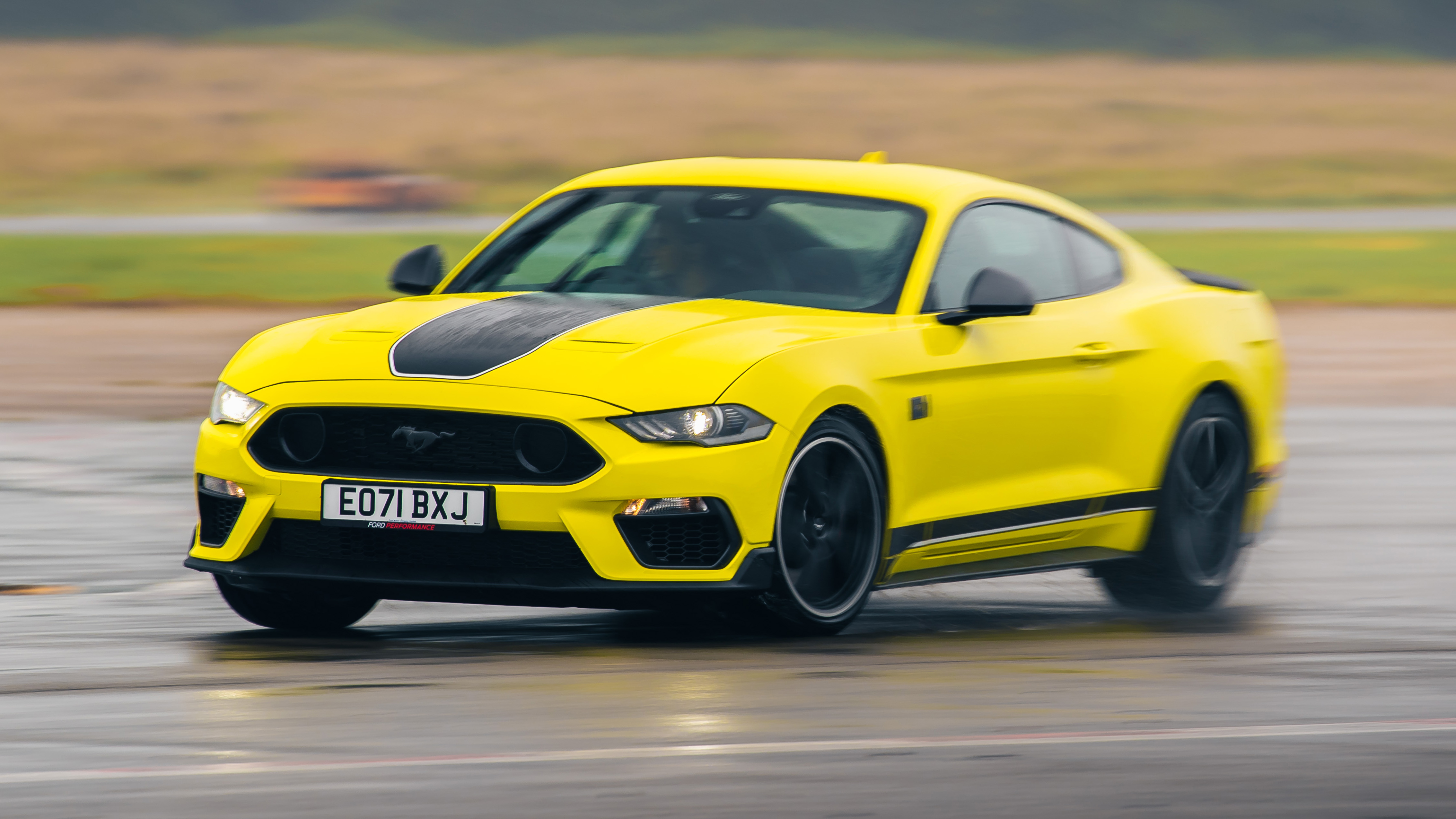 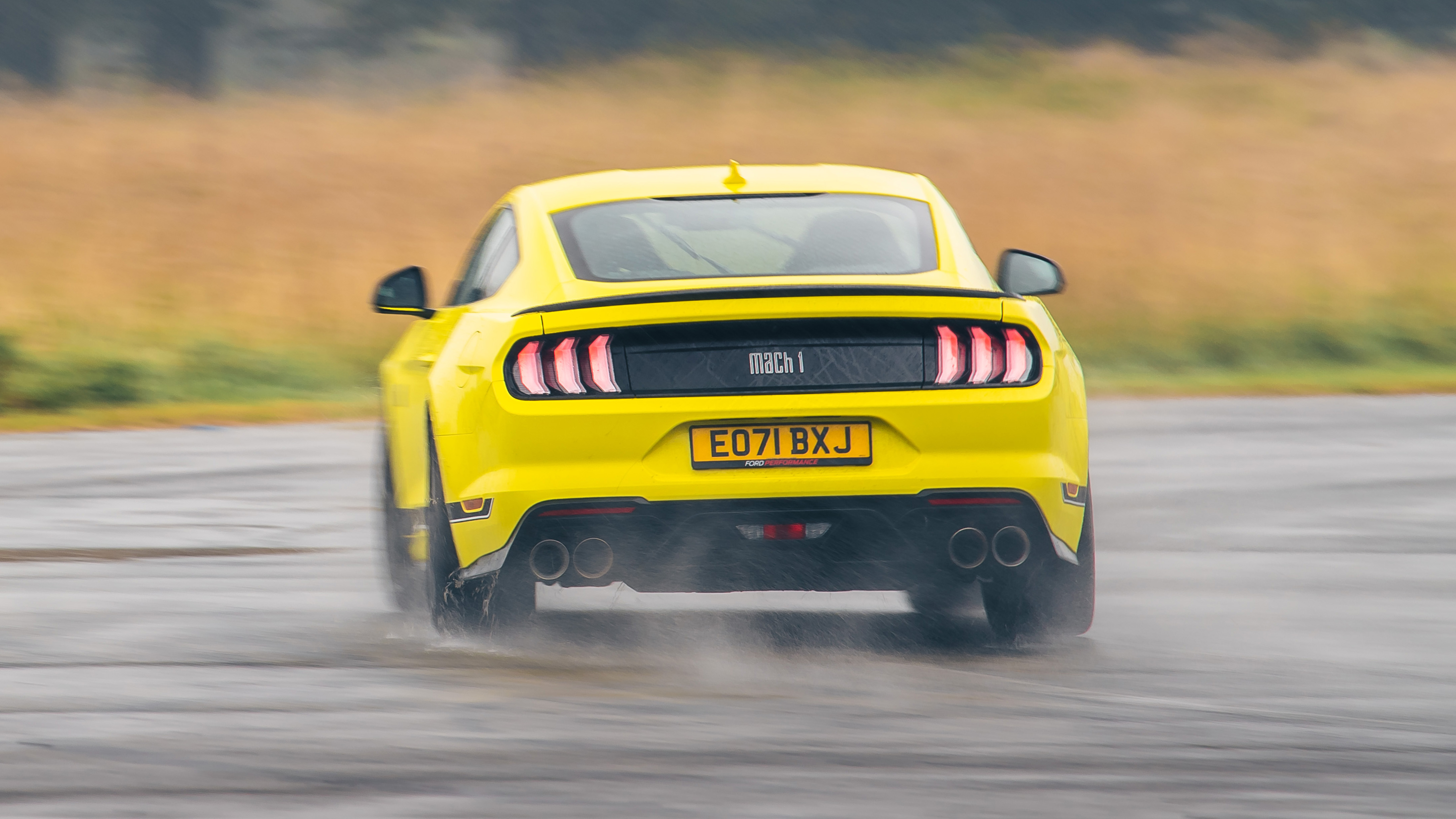 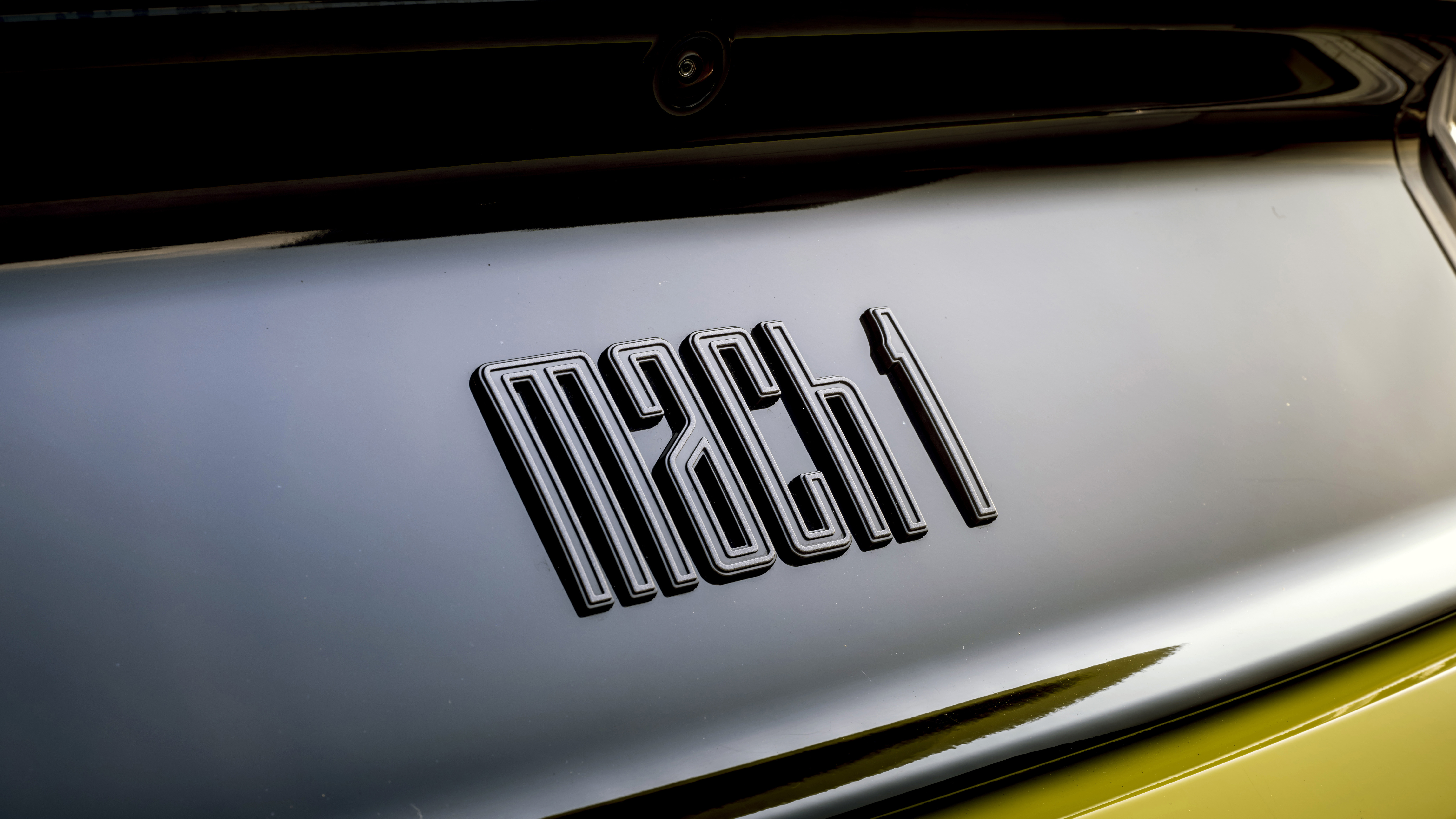 A yellow Mustang with a black stripe. Must mean business!

Of course it does. And you should absolutely spec yours with £850 worth of Grabber Yellow paint, too. The Mach 1 is the most hardcore Mustang Ford has ever officially brought to the UK. Which is a bit like saying it’s the spiciest chilli in a supermarket korma. In the US they offer a Shelby GT500, which comes with a 5.2-litre supercharged V8 developing 760bhp and 625lb ft. McLaren outputs for the same money as our Mach 1.

Which is how much?

Hang about, that doesn’t sound much more than the standard Mustang?

What’s the deal with the Mach 1 then?

It’s more driver-focused and to achieve that, has received quite a lot of detail work. The V8 has a modified intake manifold, oil filter and cooler to extract that extra 11bhp, but beyond that the changes are more marked. There are new front and rear subframes, stiffer anti-roll bars and front springs, a unique calibration for the MagneRide dampers and electric power steering.

That’s all pretty convincing. But Ford goes further. Apparently the redesigned front splitter, undertray and rear diffuser combine to boost downforce by 25 per cent. But 25 per cent more than not much is still... not much. Let’s not get carried away and think this is some half price 911 GT3.

Can the Mach 1 hold its own on track?

Compared to what? It took part in our huge Speed Week extravaganza and didn’t feel as track-happy and playful as a BMW M5 CS or Alfa Giulia GTAm I drove it back to back with. There was a bit more connection than with the other cars in that group, but then one was an electric Audi RS e-tron GT, and the other an apple green Bentley Conti GT Speed, both weighing over half a tonne more than the Mustang and designed to do a very different job.

OK, so how does it compare to a regular Mustang?

It’s a bit sharper and more eager. The engine is more responsive, quicker to pick up and overcome its inertia, and around corners it’s lighter on its feet with markedly quicker reactions and better body control.

The steering has more weight and less twirl, all round there’s just a greater sense of the car being able to respond accurately to your inputs. It makes it less of a GT, but I wouldn’t say it’s that much of a sports car if you’re penning it in alongside an Alpine A110 or Porsche Cayman. It’s the same money, but half a tonne heavier and doesn’t have the same honed physiques that they do.

It’s still not a car you just chuck into a corner. There’s too much weight, not enough dexterity for that. It responds best to being poured in so you don’t tax the front tyres too much, then get on the gas and lean on the rear tyres. It’s a shame the traction control is quite invasive and even when unshackled, still cuts in – it’s like a comic interpretation of “you know that side-slip control that Ferrari and McLaren bang on about, well, we’ve had a look and you know what, it’s bloody difficult, so we’ve just persuaded the traction control to sort of hiccup through the corner”.

This is a shame as the rear-drive only Mach 1 should have been built to slide. You feel the weight head rearwards transferring through the long wheelbase, the diff tightens and the rear tyres start to scrub wide, but then it all comes to an abrupt halt. Shame, really.

It does at least have a manual gearbox.

And it’s an instant reminder of how much harder you have to work and concentrate. Especially when the shift is this muscular and positive – it’s a wrench rather than a flick. Alternatively, Ford offers a 10-speed auto. Like to pull paddles? You’ll be doing it often enough to get RSI in that.

Is it different enough to bring new people to the Mustang?

I can’t see it myself. I can’t see Cayman or TT owners finding this enough of an advance to tip them over the edge. I suspect it’ll find a few sales amongst people wanting to wave a final two fingers at electric. I also suppose a few people will trade in their current cars for a Mach 1, but I suspect there’ll be just as many who look at the cost difference and think that £11,000 worth of open market upgrades would be a better way to spend their money.

The Mach 1 doesn’t move the Mustang story on very much. I’m glad it’s come here because it shows Ford still believes in this product for Europe, but for how much longer? This generation of Mustang has been around since 2014 and in the UK for five years now. It’s done good business, but where does it sit in a product plan that’s shortly going to be heavily electrified and orientated around the Mustang Mach-E?

It’s also a reminder of what good value the standard car is.

That’s an interesting point. At £44k, the regular Mustang gives you 100 per cent of the Mustang experience – in fact is arguably more authentic because it’s a little less taut and together. And £44k doesn’t sound that much these days – it’s all about what you think is justifiable. One last guzzling hurrah for petrol?