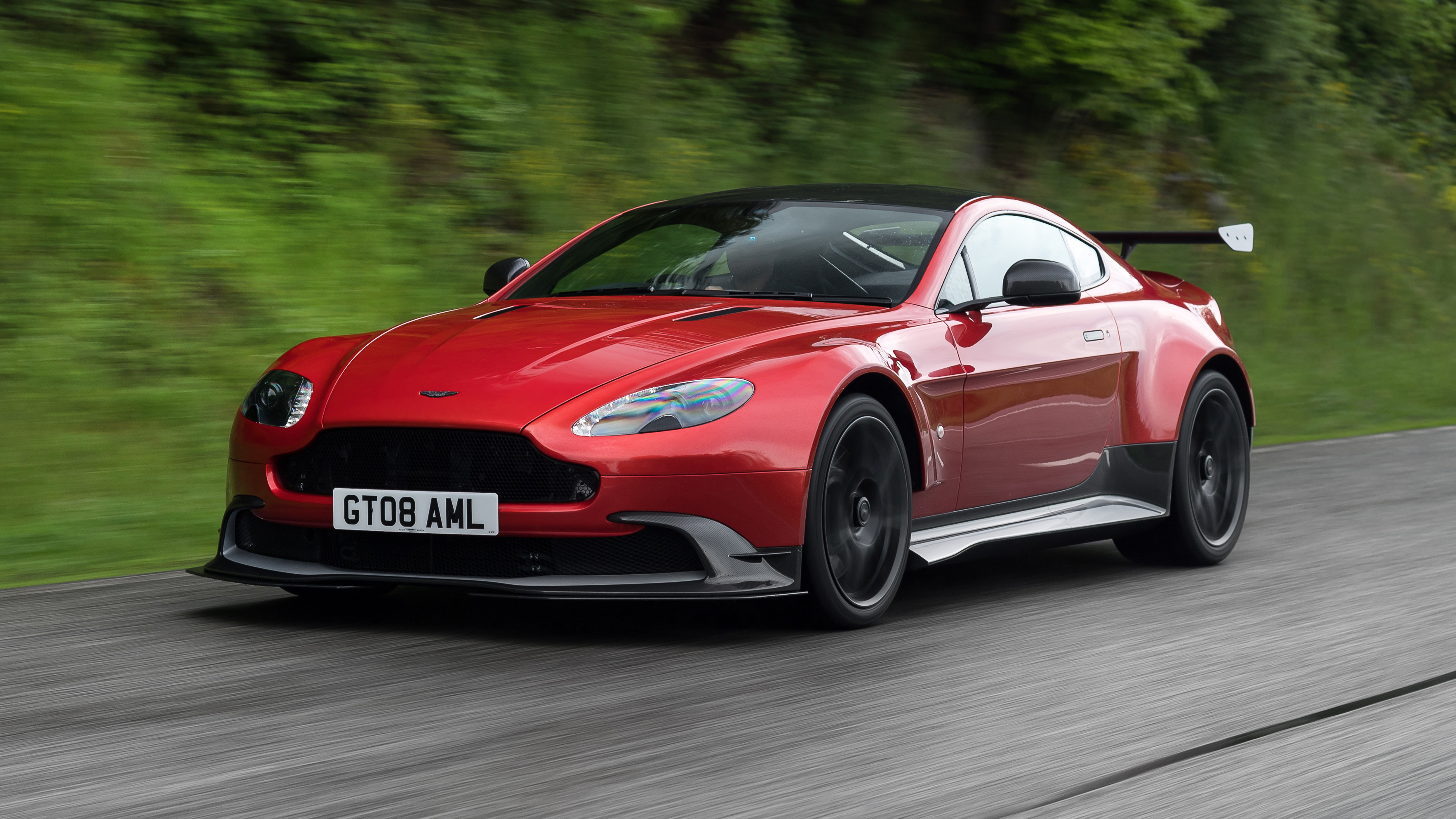 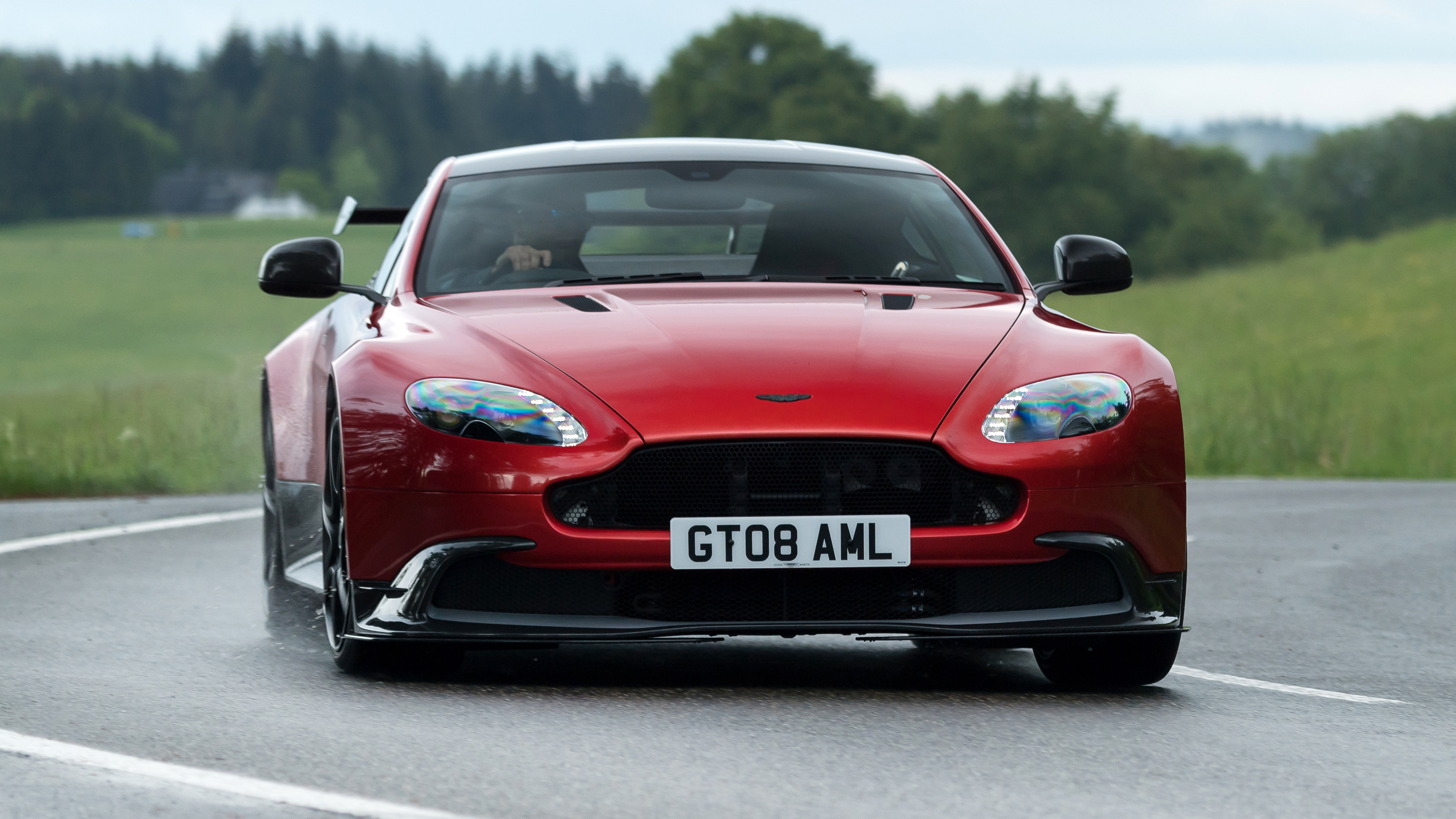 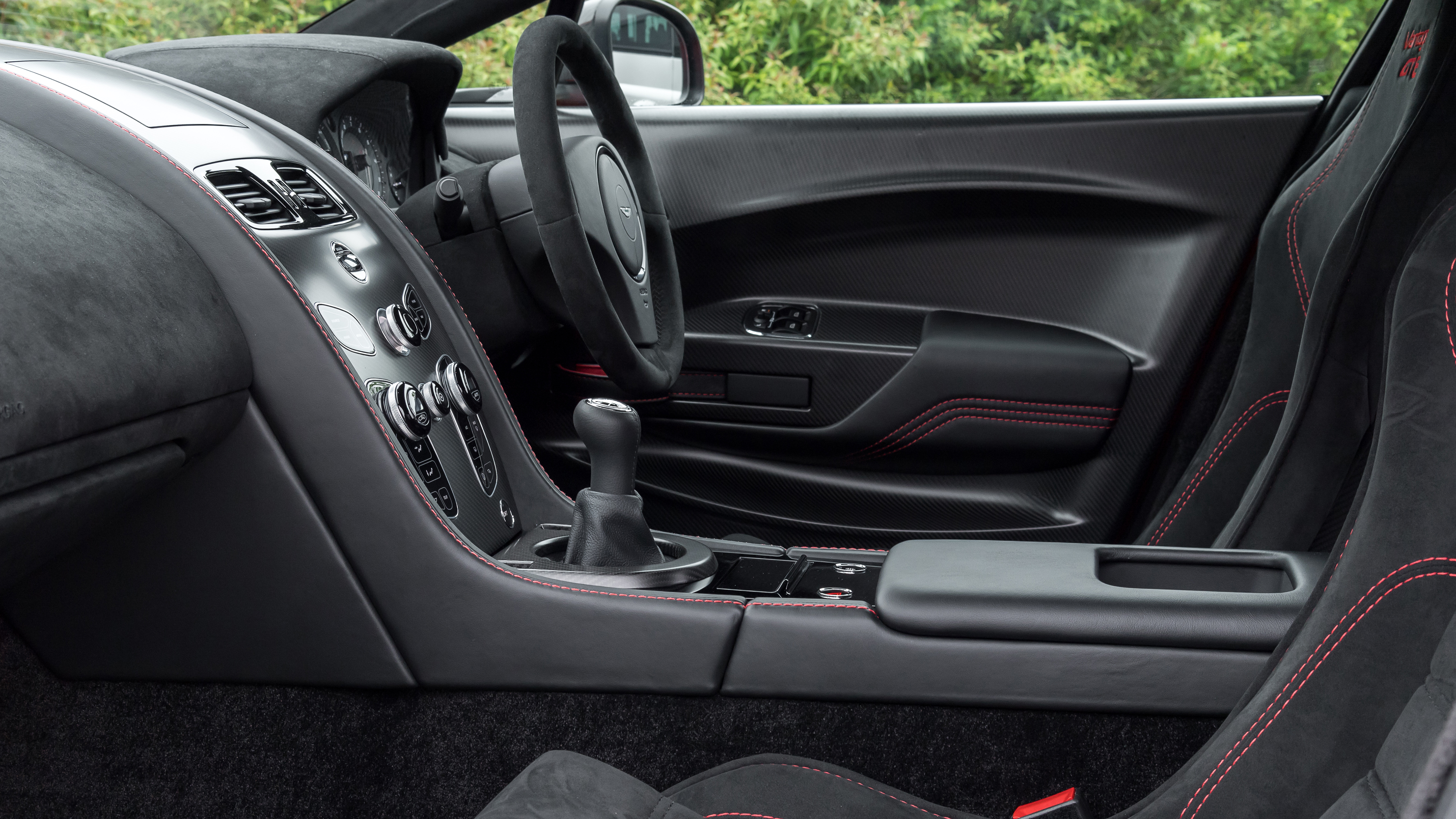 Well yes, actually, but we have a feeling you might be interested in this one. Remember the 595bhp bewinged GT12? This is its slightly less potent, but no less focused sibling – the lightest and most powerful V8 Vantage ever produced, no less, taking inspiration from Aston’s successful V8 Vantage GTE racecar.

The idea is simple: slather the Vantage in carbon–fibre and any other weight-saving measures to strip 100kg from the kerbweight, add 10bhp to the 4.7-litre V8 and stick on an extreme aero package that creates real downforce, and sends nearby Porsche 911 GT3s cowering into the corner. Oh, and there’s a titanium exhaust system that a cross between NASCAR and a Spitfire… but more on that later.

Is that really a Vantage under all those wings?

We know, it’s a proper eyeful, but the quality execution is truly wonderful close up. Take the cutaway front wheel arch, for example, a lovely touch pinched from the aforementioned racecar, and then there’s the jutting side-sills and front lip spoiler – finished in naked carbon with optional colour-coded highlights – and the mother of all rear diffusers hanging out the back. The wing and chin spoiler extension, along with the stunning centre-locking magnesium wheels, are optional… but you just would wouldn’t you?

We urge you to check out Aston’s online GT8 configurator. Be warned: you will lose an hour of your life, but it’s worth it for the huge array of colour, trim and bodywork options – unusual on a £165,00 special like this, limited to just 150 cars worldwide.

Where does the 100kg saving come from then?

Carbon, lots of lovely carbon. Not only is the aero addenda made from it, but the front and rear bumpers, too. And then there’s an optional carbon roof panel (good), carbon door handles (naff) plus boot and bonnet badges laser cut from the stuff (odd). On the inside you settle into carbon-fibre sports seats, far comfier than their meagre padding suggests, and use leather straps to tug the carbon-fibre door panel towards you. A standard lithium-ion battery, along with a polycarbonate rear screen and rear side windows complete the savings. Frankly it could have been lighter, but Aston decided to keep the stereo, air-con and sat-nav plugged in. The result is a total of 1510kg, 65kg more than a Porsche 911R. 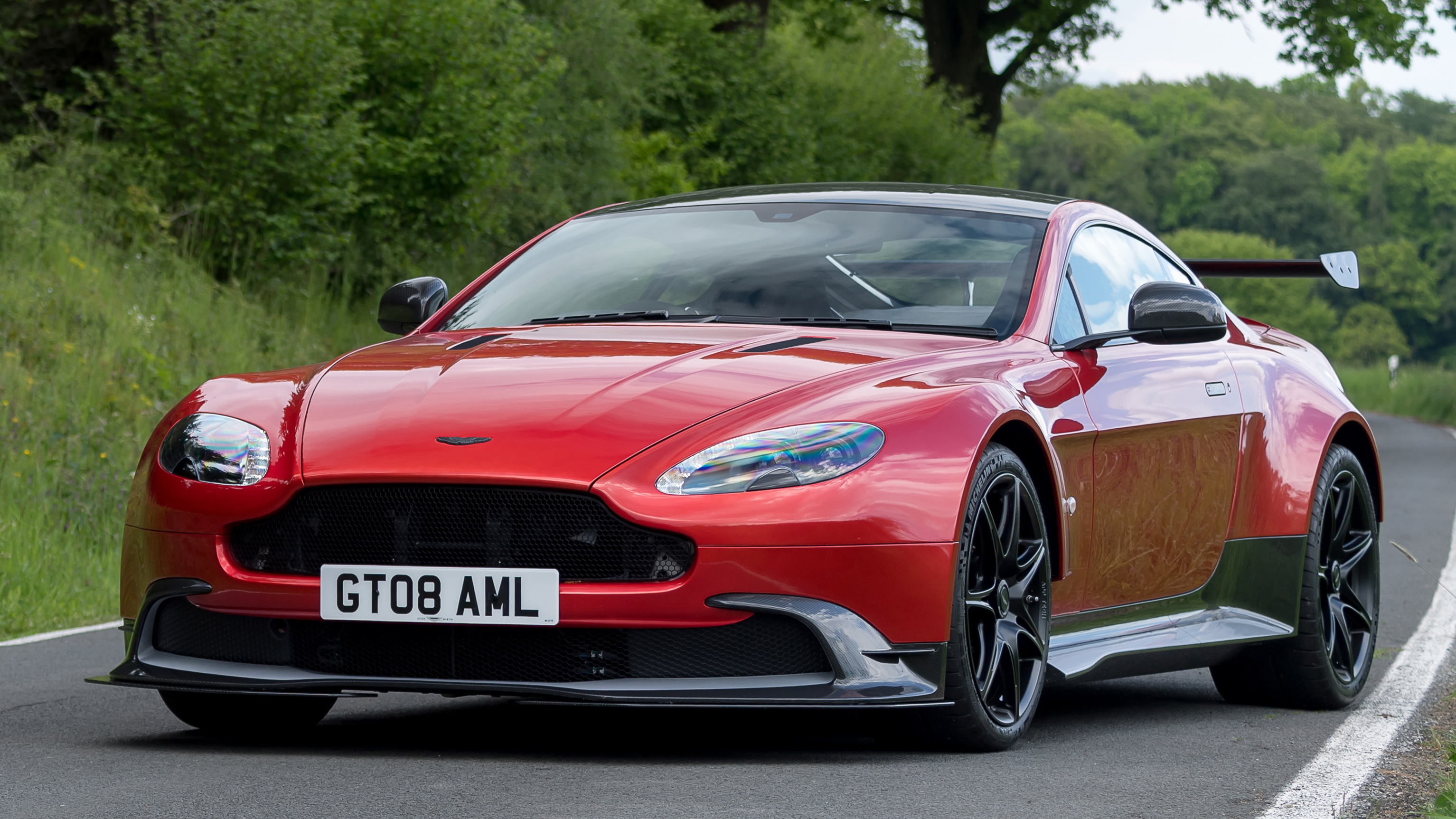 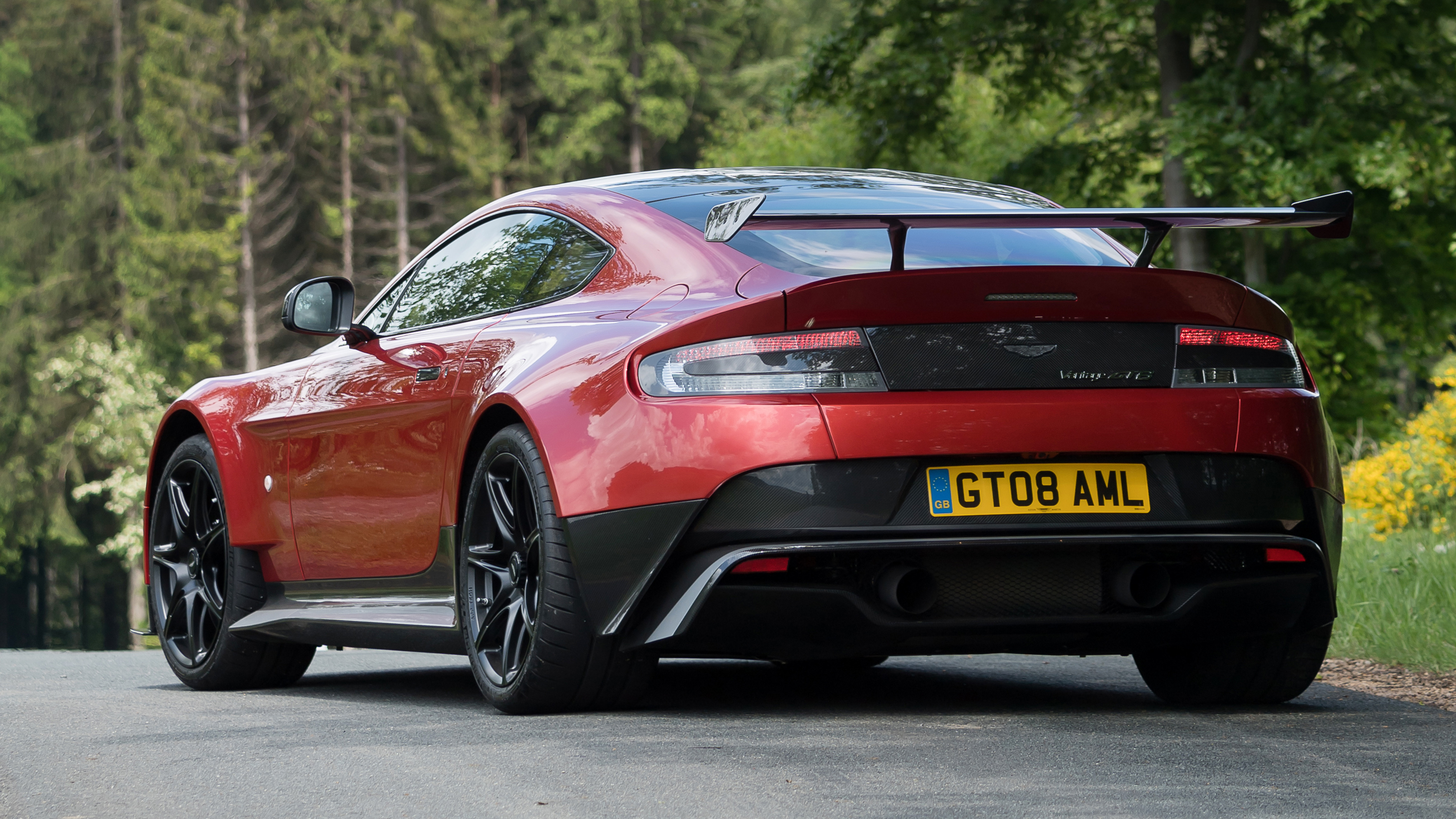 What about the bits we can’t see?

The ageing 4.7-litre V8 (soon to be replaced by Merc’s 4.0-litre twin-turbo V8), gets a 10bhp bump over the V8 S, to 440bhp at 7300rpm and 361lb ft of torque at 5000rpm, which isn’t masses by modern supercar standards, but 0-60mph in 4.4 seconds and 190mph is enough to keep you interested. Those new 19-inch wheels are wrapped in sticky Michelin Pilot Sport Cup 2 rubber, while the springs and dampers are firmer, although Aston won’t confirm by how much.

So it’s very much a track toy with number plates then?

Not at all, and we couldn’t be happier. There’s more road noise, naturally, but Aston has resisted going down the concrete dampers route, so it works brilliantly on real, gnarly UK roads. There’s enough movement so the car feels alive underneath you and doesn’t rebound off every undulation in the road, but change direction quickly or take a crest at speed, and it regains body control quickly. Truth be told, that wing is probably a bit misleading – it could handle a track day, sure, but it feels set up specifically for public tarmac; more of a 911R rival than a 911 GT3 RS.

Both are available, but manual every time. Unlike the V12 S’ truculent dog-leg seven-speeder, it’s a regular six-speed here and so much the better for it. The clutch has some heft to it – we’d be disappointed if it didn’t - but the lever moves with just enough weight to require positive placement, but not enough that shifts are ever laboured or miscued.

We’ve waited long enough, what does it sound like?

Yes, yes, in a bit. First the engine, because compared to the outrageous visual statement it makes, it isn’t actually that quick. What it does have though is a beautifully linear delivery and the perfect amount of power for the road – you can actually use full throttle occasionally without tickling three figures or smearing yourself up the nearest tree. Get the revs rising and falling around the 5000rpm mark and an inch of throttle movement equals instant thrust. On the flip side the steel brakes have great feel so you can bleed them on and off in the corners, using them to help steer as well as stop.

And the noise is transcendent. An intensifying gargle played in tandem with a rasping metallic vibration that feels like a chainsaw burrowing into your skull… in a good way. I realise that I recently claimed the Mustang GT350R’s flat-plane crank V8 makes the world’s best noise, but now I’m seriously rethinking.

Crikey. And it steers and grips, too?

Yep. In fact the steering may be its single best attribute. The hydraulically-assisted wheel just feels so natural in your hands. It doesn’t tug or wriggle, just gently nudges in one direction or the other, giving you tips about subtle camber changes in the surface.

Downforce is always a tricky thing to quantify or confirm on the road – there are just too many variables at play. But whatever the cause, whether we were early on the throttle or coming in too hot to a corner, the tyres showed no sign of letting go, only carving straight and true. A few briskly-taken corners and you’re brimming with confidence.

Well, apart from the £165,000 starting price before you’ve let yourself loose on the configurator, and an exhaust that your neighbours won’t thank you for, we’re struggling to think of any. This is Aston at its best – a raw, analogue type of car that’s bursting with character, but backs that up with genuine agility. If you want to get there faster buy a 911, but you’ll be grinning harder in one of these.