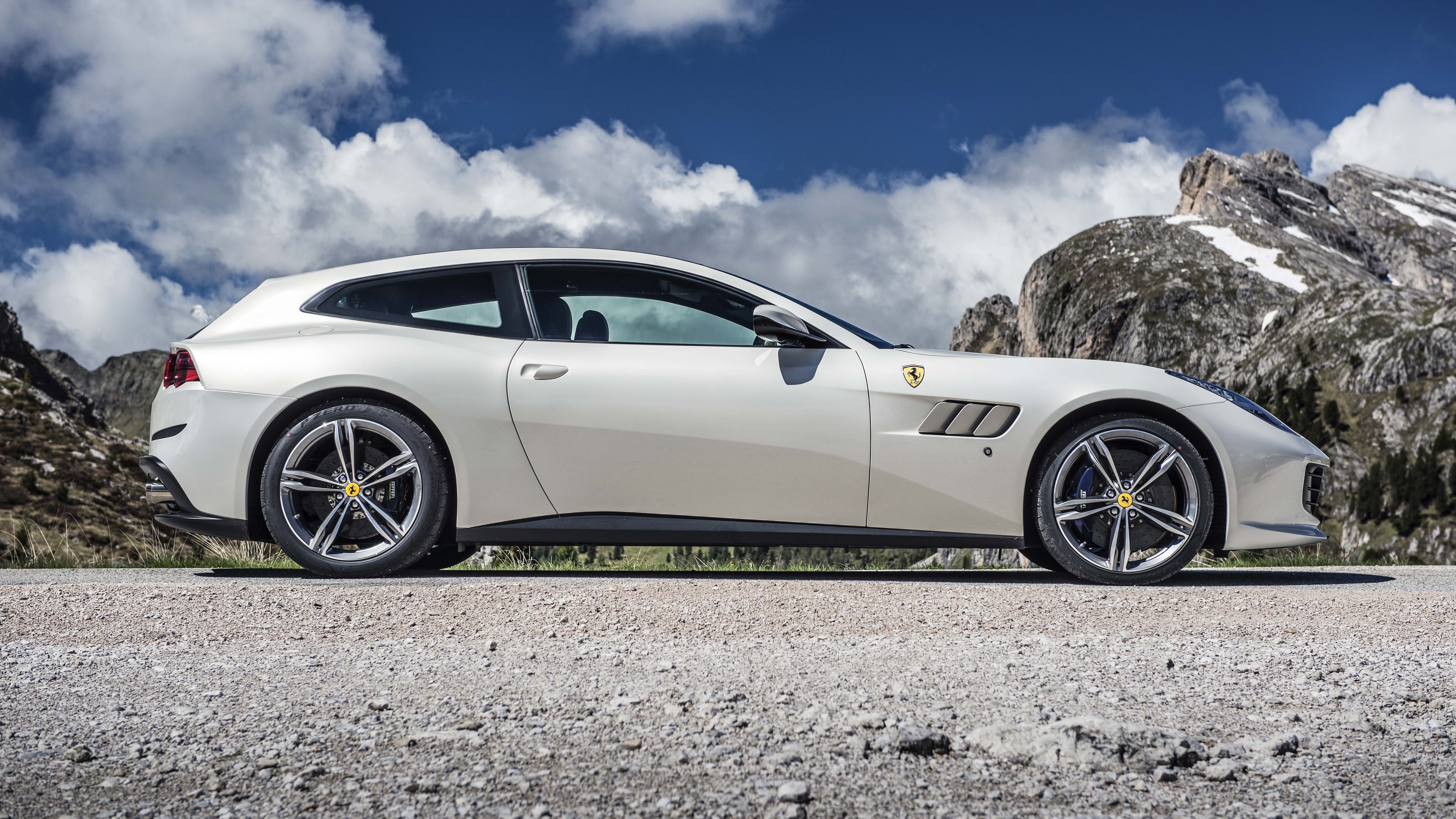 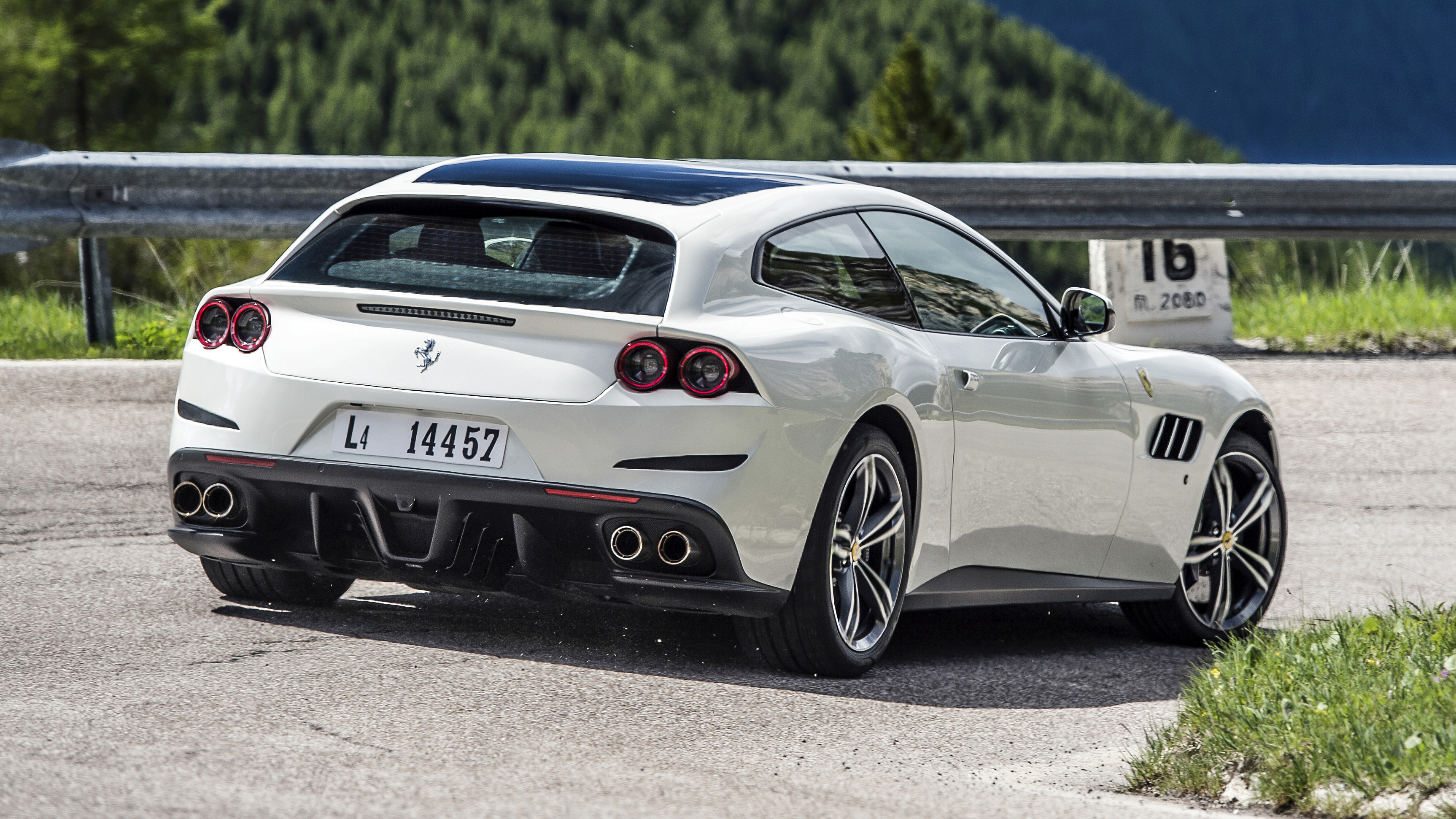 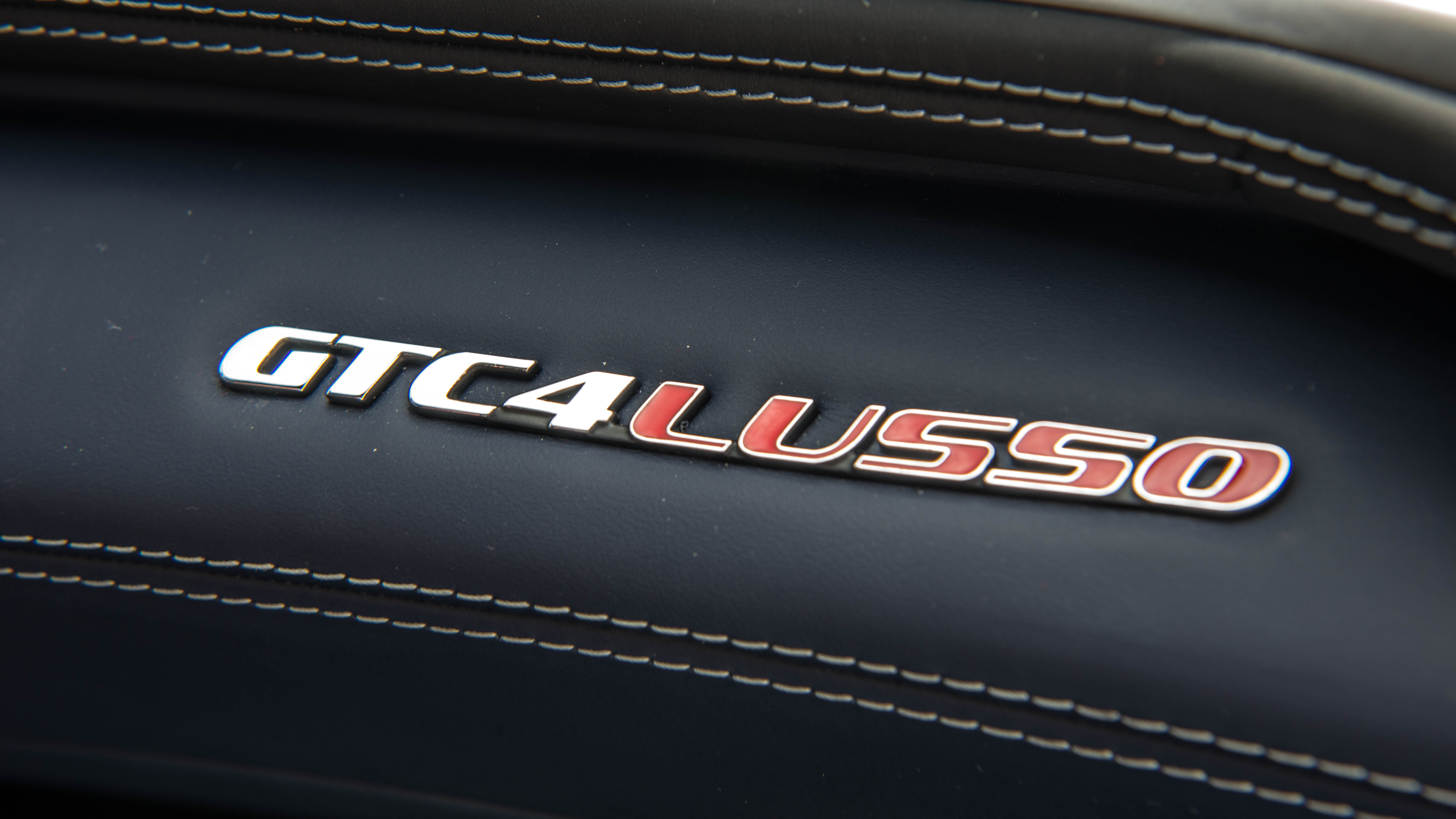 So FF has become GTC4Lusso?

Maybe the old name was too literal. Four seat, four-wheel drive. Not very sexy. Whatever the reason, it's now the GTC4Lusso. As names go this one's a bit clunky, but it does talk to Ferrari's history. And Ferrari is good at liaising with its back catalogue, not just through plucked names, but through model continuation - the mid-engined V8 sports car, the front engined V12 coupe. These are long running themes at Maranello.

Ah, but the FF was 4wd – Ferrari hadn’t done that before.

Yes, but if you look beyond the clever power take-off at the front of the engine that drives the front wheels, the FF slotted into a familiar Ferrari niche. Here was a front-engine V12 four seater that could actually seat four, and for extra brownie points, swallow their luggage too. It required little compromise, delivered where it needed to, exceeded expectations.

But that was five years ago, what’ve they done to freshen it up?

For the most part the facelift is entirely predictable. It's got a bit more power, a little less weight, rear passengers have 16mm more legroom, emissions have dropped, the infotainment is improved. But one thing is perhaps surprising.

Not surprising, so does the F12 and LaFerrari.

True, but when the 488 has switched from nat asp to turbos there’s got to have at least been a chance the FF would as well. Personally I’m delighted and relieved – and not as surprised as I was when Audi announced the R8 would run a V10, and not a blown V8.

Besides, the 488 gained forced induction not because of emissions legislation, but because it was at risk of being out-powered by Porsche and McLaren. But the GTC4 is different. It has no natural rivals, there’s nothing out there - literally nothing - with the same skill set.

Ever tried sitting in the back of the Bentley or Aston, or really attacking a road in a Wraith? It’s not what they’re about. The GranTurismo probably comes closest in ethos, but it’s light years away in execution. The Ferrari is really quite exceptional in the amount of space it combines with amount of engine.

So a naturally aspirated V12 it is. And naturally Ferrari has not left the old 651bhp unit alone. The compression ratio has been raised, the piston design has changed, there’s now multispark ignition and, as a result, power has climbed 30bhp. 681bhp is a big number, enough, with tweaks to the gearbox and traction software, to knock 0.3secs off the 0-62mph time. 3.4secs is, well, RS6 rapid, and from there on the Ferrari hauls away: 0-124mph in 10.5secs and a 208mph top speed.

Any other engine changes?

Well, I think it’s quite interesting that the GTC4Lusso starts more quietly in the mornings than the FF. Ferrari has been listening to its customers and they said they didn’t want it to be quite so effusive first thing. So now the exhaust baffles stay closed more.

You see this response to customer feedback in other places as well. The steering wheel is new, now equipped with bigger pads for the headlight and wiper controls and indicators that can be activated by fingers from behind as well as thumbs at the front. It's more functional, but aesthetically? Not so good.

That’s the trouble with customer feedback – giving them what they say they want is not necessarily the right approach. Remember Henry Ford and his quote about a faster horse?

So I quite like the toned down early am exhaust, and the fact that the heating fans are now 50 per cent quieter, but I’m less than convinced about the new steering design – especially the little clickwheels on the back that rotate the menu to the next option when you’ve just tried to select the one above.

And the rest of the cabin?

Close to a triumph. The new dash design, which incorporates a ten-inch integrated central screen (the processor which runs it is eight times faster than the old one) and a separate display for the passenger is a big improvement. It’s quick and slick and the passenger screen has pretty decent functionality, including the ability to make phone calls, control music, fiddle with the sat nav and see how fast the driver is actually going.

The leather and metal are peerless, and plastics maybe not quite to the same standard, but by no means bad, and there’s now 50 per cent more stowage space. You shouldn’t care about this in a Ferrari, but I reckon it’s permitted in the GTC4Lusso.

For the same reason I can tell you about the 50:50 split fold rear seats, the 800-litre maximum boot volume, the sense of space those in the back enjoy if you should spec the £11,500 panoramic glass roof. Honestly, you can travel in the back of this car with no hardship whatsoever.

So you should be able to – it’s big enough outside.

Only millimeters bigger than the FF – although point taken that it’s not far off the size of an S-Class. It does look big too, but the changes wrought to the exterior have altered the proportions.

The new strakes behind the front wheels have helped visually shorten the profile, while the rear haunches are more curvaceous. The back end, bracketed top and bottom by an integrated spoiler and underbody diffuser, looks really cool. The rear hatch is more upright, improving both stowage and aero apparently. I love the way it looks from the rear three-quarter – the front I can take or leave, but the rear sells me on the whole car.

Overall there’s more tension to the surfacing, more sculpting. The FF used to look like a long, thin, pencil-ish car, but the GTC4Lusso comes across as a bit shorter and broader. That change is reflected in the driving. The track widths have barely changed, yet it feels more broad shouldered through turns, and stubbier than its 4922mm length suggests. 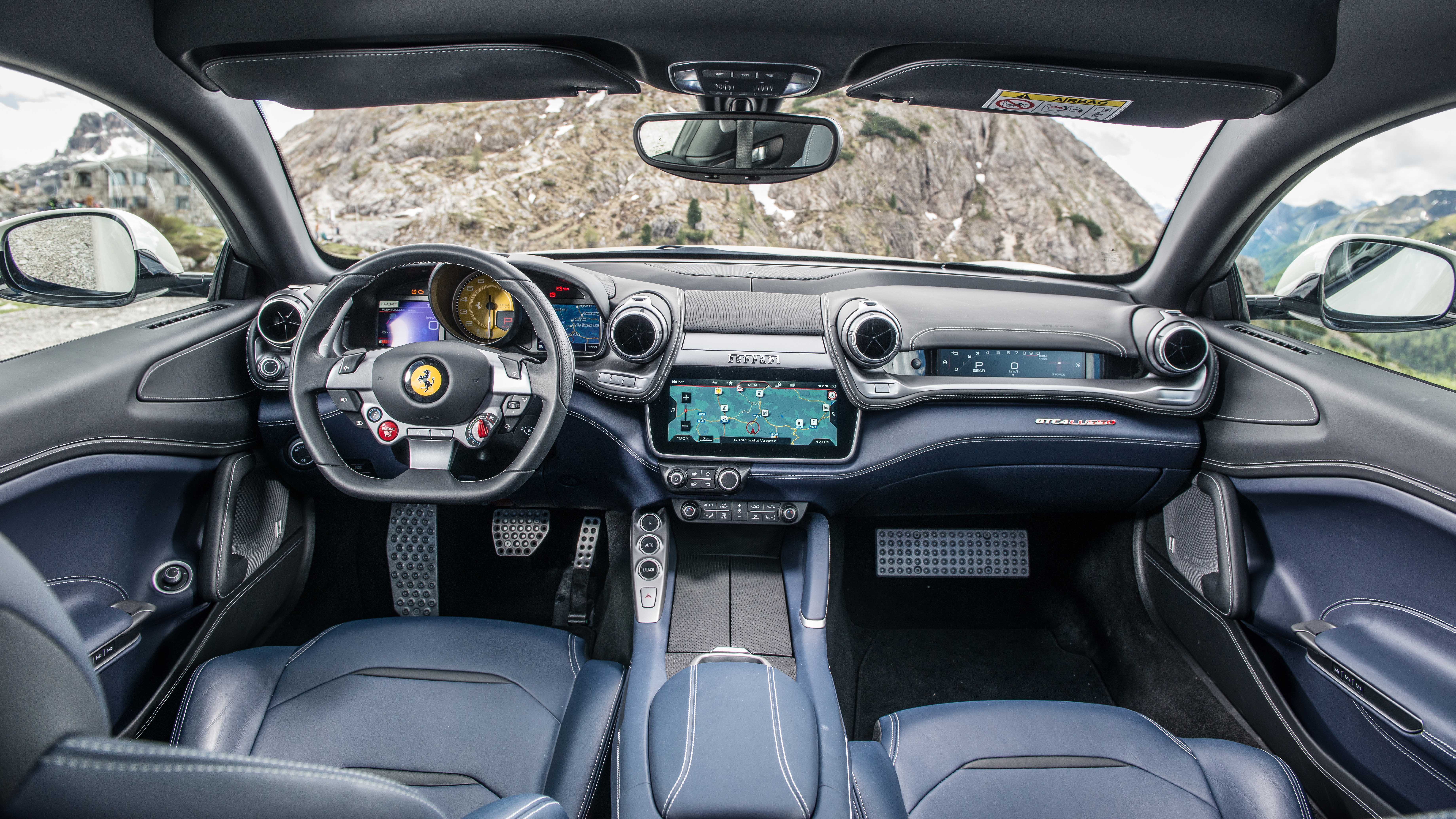 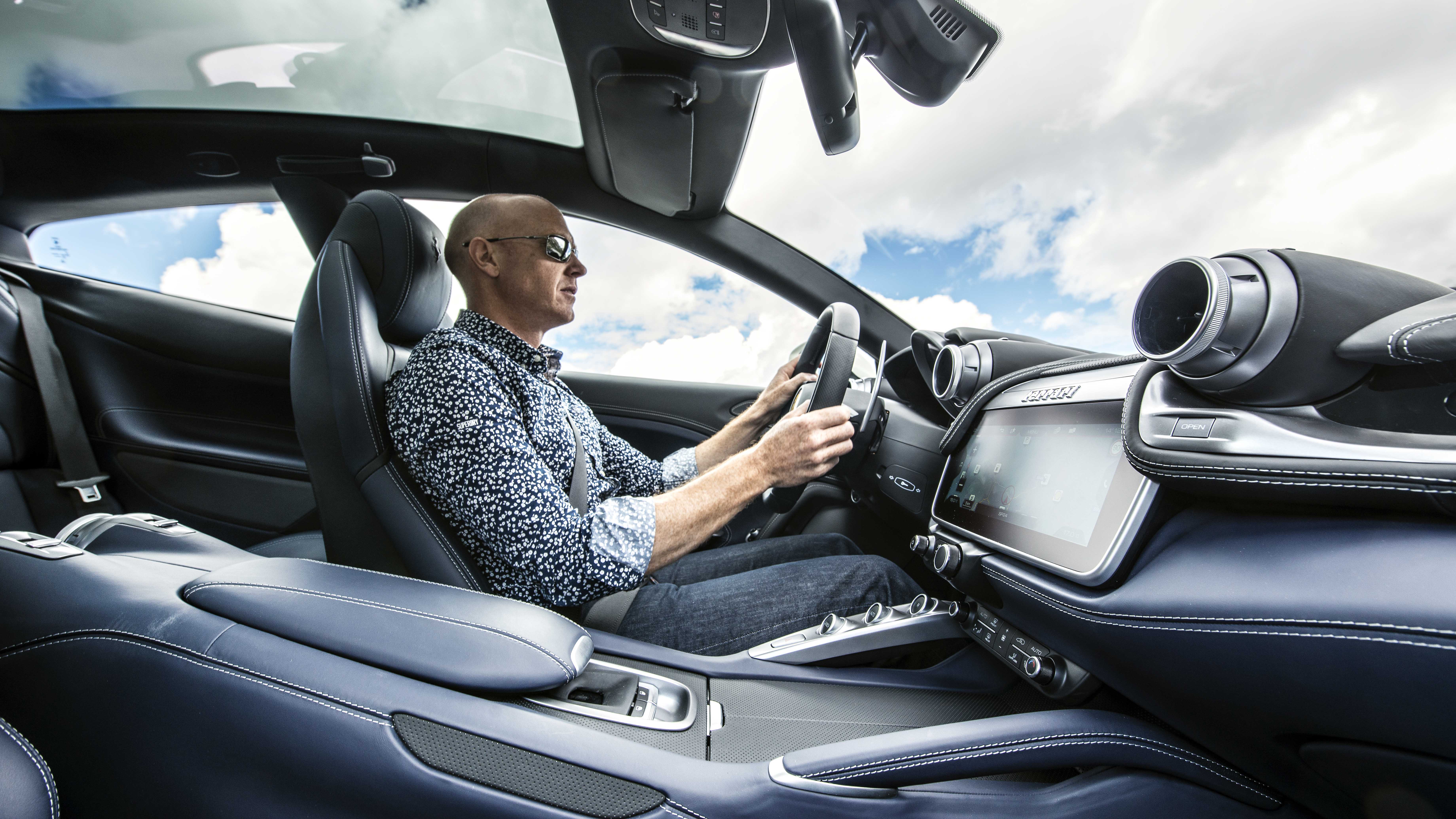 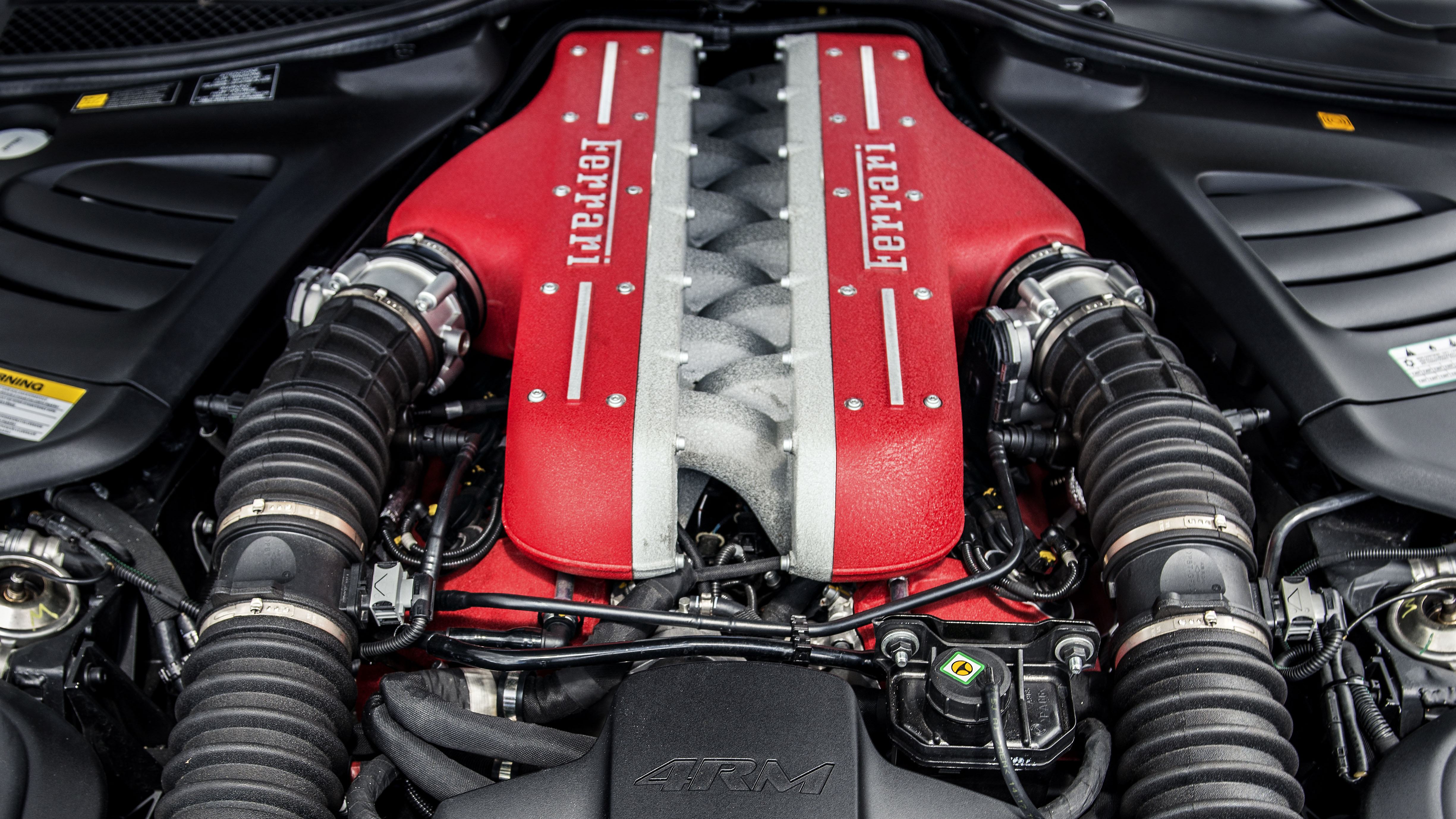 Not if you phrase it like that, it doesn’t. So instead think of it as having a shorter wheelbase, which, in effect, it does.

Anyway, it works in harmony with SSC4, SCM-E and E-Diff (in order: side slip control, adaptive damping and electronic differential), but I only mention them to show the complexity and integration of the various systems that keep the car pointing in the desired direction on a thin ribbon of tarmac laid over a treacherous Dolomite.

Anyway, the four-wheel steering really does make the GTC4 more agile than the FF. It is a bit lighter (by about 60kg in total), which helps with direction changes, but this system, which is almost entirely unobtrusive, makes the GTC4 sharper into corners (when the wheels turn in the opposite direction to the fronts) and gives it a more attacking, willing demeanour.

It occasionally felt snatchy coming out of tight corners, meaning I hadn’t wound the lock off the super-fast steering quite fast enough. But that’s the only time I ever felt the GTC4 wasn’t 100 per cent cohesive.

You’ve got to remember it’s a big, heavy car, and one that isn’t particularly designed for the mountainous area of northern Italy Ferrari has chosen to launch it in, which is over-burdened with hairpins at altitude and traffic in the valleys.

But surely wealthy euro-playboys will use their GTC4s to go skiing?

Absolutely, but the fact remains that hairpins are not a natural stomping ground for a 1920kg, long wheelbase grand tourer. Or at least they shouldn’t be. What I find as I drive and drive is that the Lusso does a far better job of controlling its weight on these tight, difficult roads than I’d anticipated.

On the few open sweepers we encounter it’s clearly in its element, big engine howling, just a sniff of steering lock applied, but the tight stuff does give you plenty of proof about how well this car apportions torque to each wheel. It’s very, very effective. And actually very engaging, too. Mostly because of the V12s sonics, but the steering gives you confidence, there’s masses of grip and good balance.

The weight distribution is 48:52 and though it is the front end that will eventually start to nudge wide, by that stage you will have already felt the 4wd system assisting, trying to keep the front end on track. It’s not quite a Nissan GT-R in terms of adjustability, but it’s not bad.

Very well controlled indeed. Initially I was surprised that the GTC4 didn’t have the same suppleness in its suspension as the 488GTB, but the more I drove it, the more I came to appreciate how exceptional the wheel control is. Ferrari claims the chassis attachment points are 20 per cent more rigid and I wouldn’t doubt that at all.

And although the springing isn’t plush the GTC4Lusso isn’t uncomfortable at all, it just deals with stuff in a completely unflappable manner. Deals with it and moves on. Next problem. No fuss. So little disturbs the on-board calm.

Little except the engine of course...

Of course. Yes it now has an extra 30bhp and 11lb ft, but you don’t notice that. It was deeply fast before and it still is. Instead it’s the sheer driveability it offers that sets it apart. This is an utterly triumphant engine. It has epic reach and spectacular harmonics.

I love the way the GTC4 deals with corners, but the best bit is when you get the power on, feel all four wheels work the last part of the corner, then the V12 hurl you up the straight. It does have reasonable torque at the bottom end (80 per cent at 1750rpm Ferrari claims, although it doesn’t feel quite that strong), but forget about that, because it’s what happens higher up that counts.

How about the gearbox?

The double clutcher is great on upchanges, not quite so slick heading downwards. Also better used in manual mode than left to its own devices.

Classy and special. I was sceptical about how much of a step forward over the FF it would be when the basic concept remains so similar, but it’s a wholesale inside and out reworking that’s lost nothing, gained extra dynamism and retained the atmospheric V12.

It’s £230,430, which is a hill of money, but I can’t think of a more sophisticated, elegant, upmarket way for four people to travel this side of a private jet. Ferraris can sometimes seem a little brash, but this one not only dodges those connotations, but also manages to lift the rest of the range. Just tremendous.