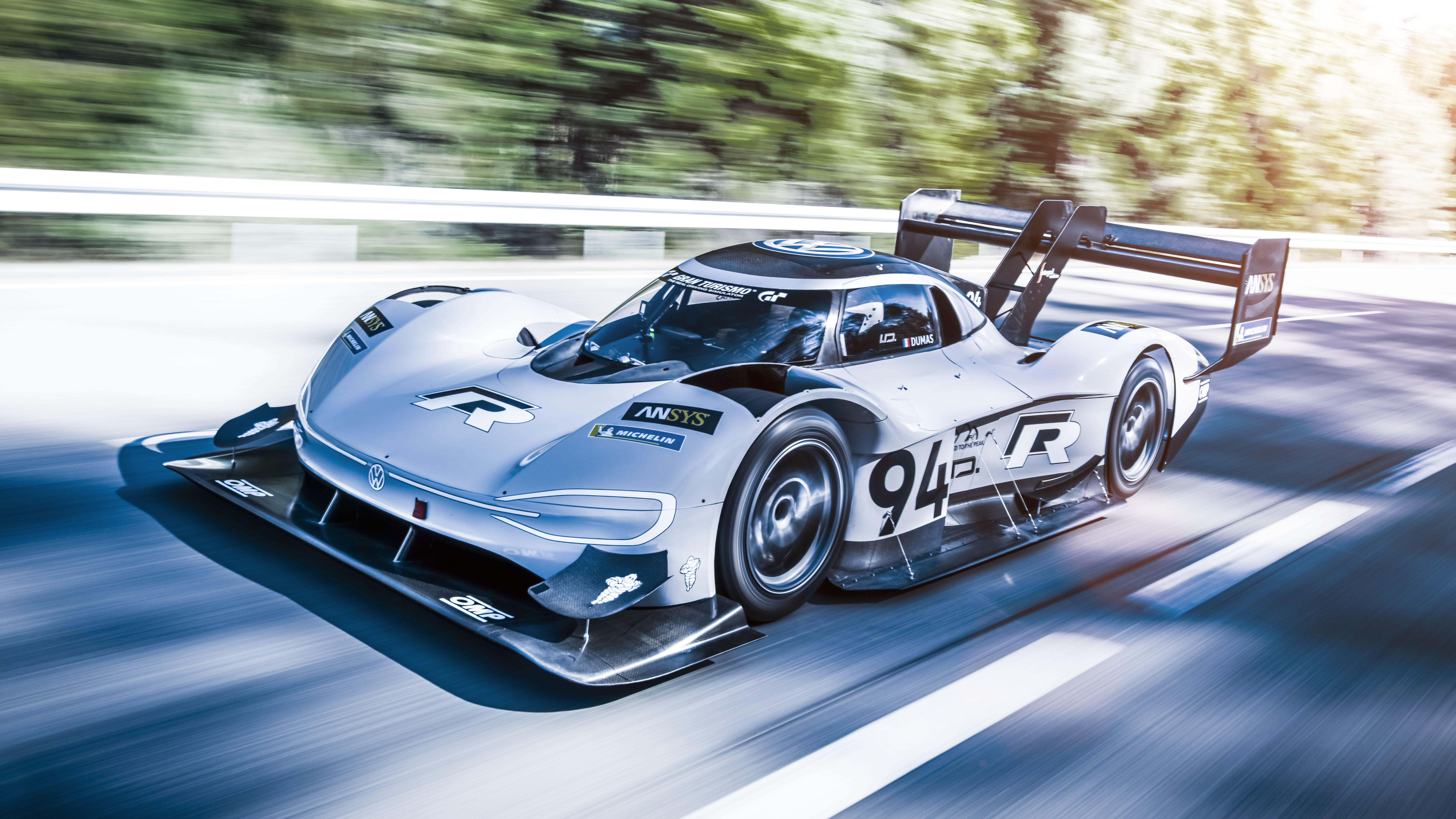 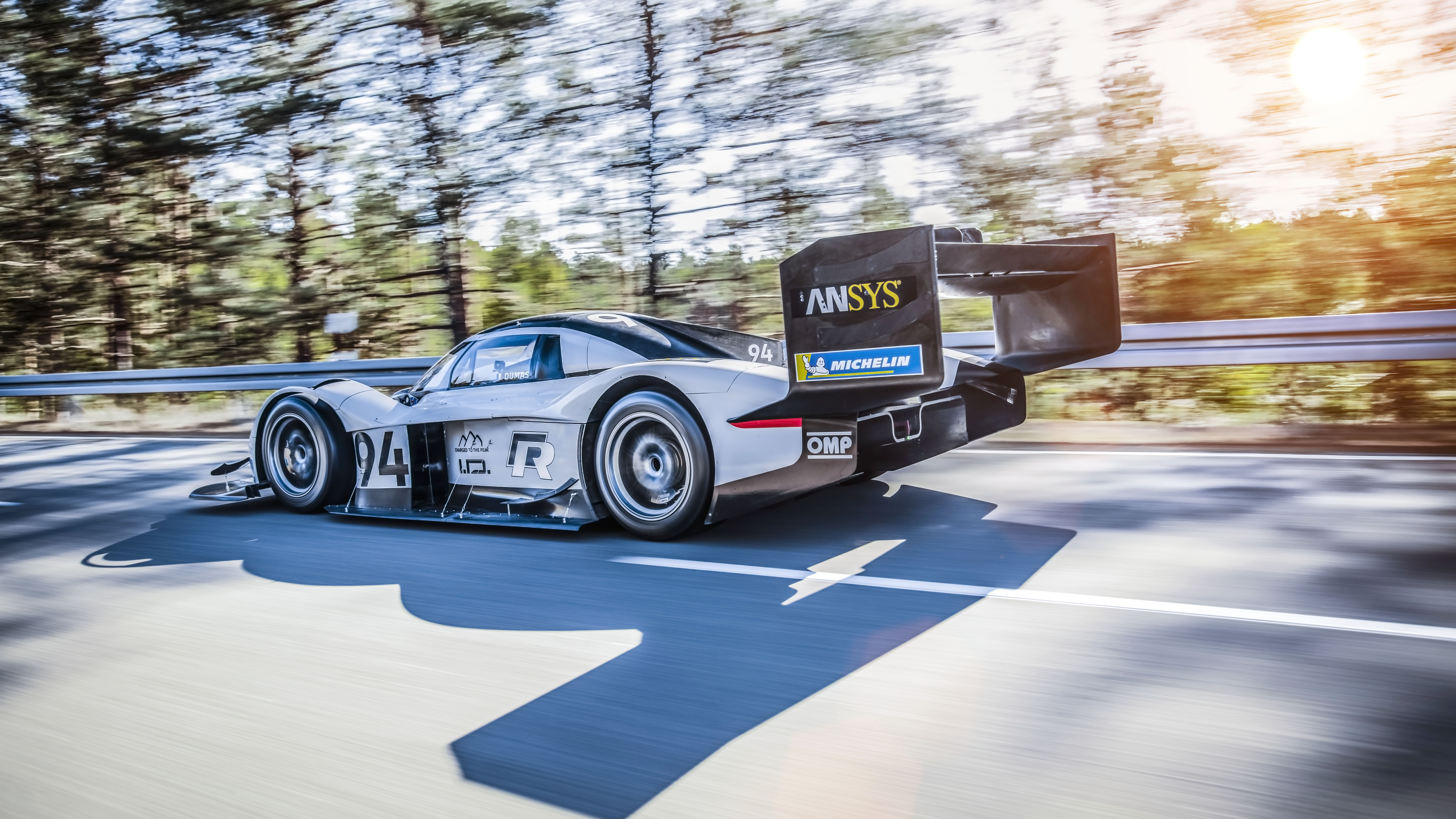 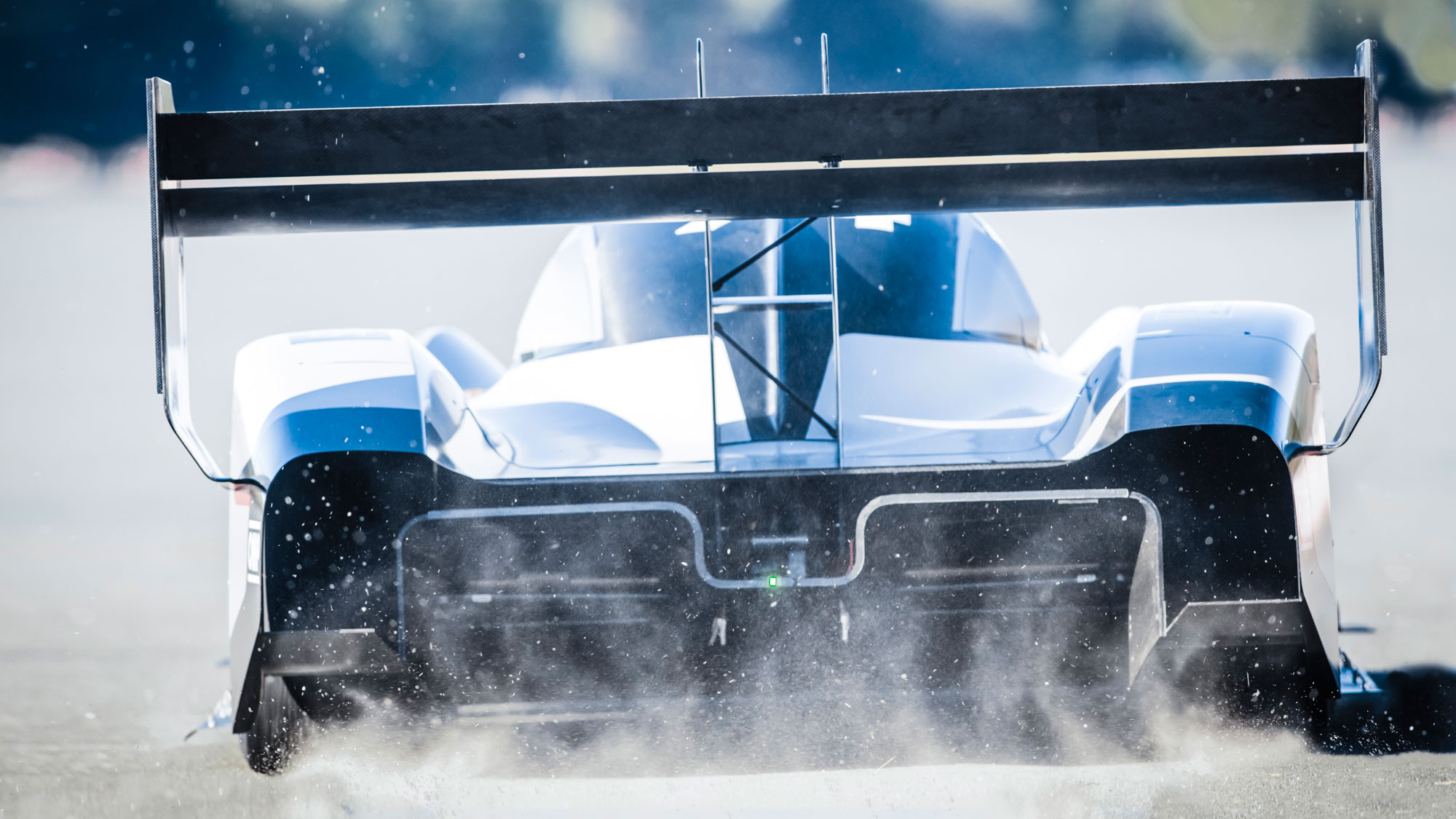 Ah, Volkswagen’s I.D R, the car with the biggest wing west of the Mississippi.

Well, it might have been west when it won the Pikes Peak Hillclimb back in June this year, but right now it’s east, a very long way east. At VW’s Ehra-Lessien test track in Germany to be exact. And somewhere decidedly not-hilly.

In fact I don’t think VW could have found a single place on earth flatter or more open for me to drive its 670bhp, 1,100kg e-rocket. This, it will turn out, is actually A Very Good Thing.

I’ll come on to that, because firstly I need to tell you about this car. It's bananas. VW did the whole thing, from making the decision to have a crack at Pikes Peak, to actually having to put a car on a transporter to go out there, in just 250 days. OK, they threw a core team of 30 people at the problem, but they started with a completely blank sheet of paper.

So shortcuts were required, the first being an off-the-shelf carbon tub, borrowed from a Norma hillclimb car. “Of course, if we did our own monocoque and could integrate the batteries then we would have a much better solution for weight, stiffness and packaging”, lead engineer Dr. Benjamin Ahrenholz tells me, before going on to point out that the battery pack, a 40kWh number weighing a quarter of the car's mass, sits in an L-shape alongside and behind the driver.

Running a 915-volt system (sounds like a lot, probably is, one day I promise I’ll understand electrics better), the batteries power an electric motor on each axle with torque split roughly 40:60. Altogether the system develops 670bhp and 479lb ft.

Interesting one. It has LMP1-spec Alcon carbon brakes, plus a regenerative system. VW tells me it can pull up to four or five G under braking alone. 20 per cent of the energy needed to reach the summit of Pikes Peak was harvested through the electric motors. On battery alone it would not have made the chequered flag. Well, not unless Romain Dumas had backed off significantly, which is hardly the point of the ‘Race to the Clouds’.

Yep, Loeb set a time of 8m 13.878s back in 2013. Romain Dumas went some 16.5 seconds, in a car with, on paper, a significantly worse power to weight ratio. Two things. The I.D R produces its power and torque everywhere, at any speed. And it does that geographically, too.

The start line is at 2,865 metres, up where the air is thin. The finish is at 4,303 metres, where it’s positively emaciated. And an internal combustion engine needs air to breathe, whereas an electric car doesn’t. That, and probably a bunch of other factors such as a low centre of gravity and superior aerodynamics, help account for the I.D R’s speed. 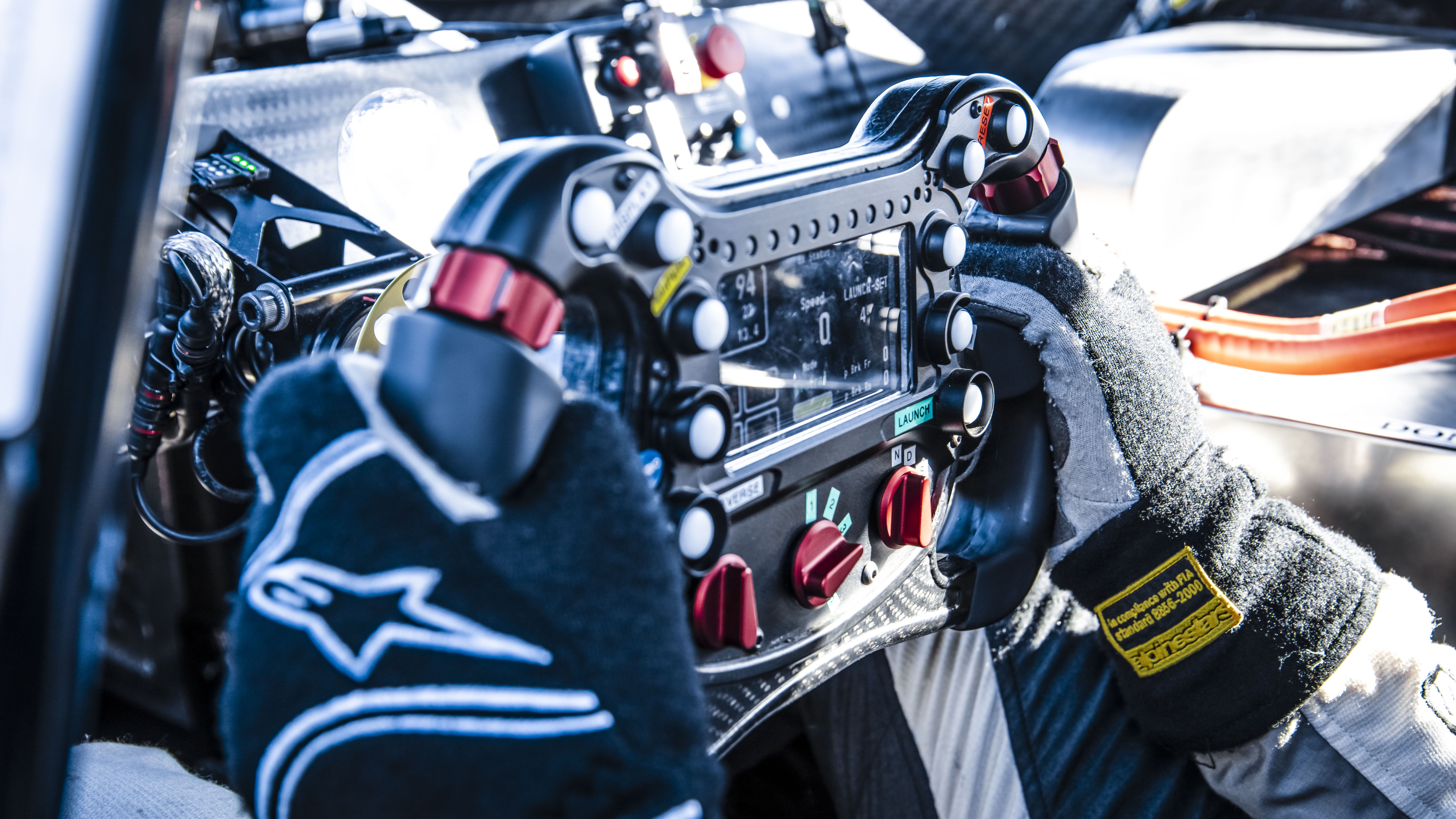 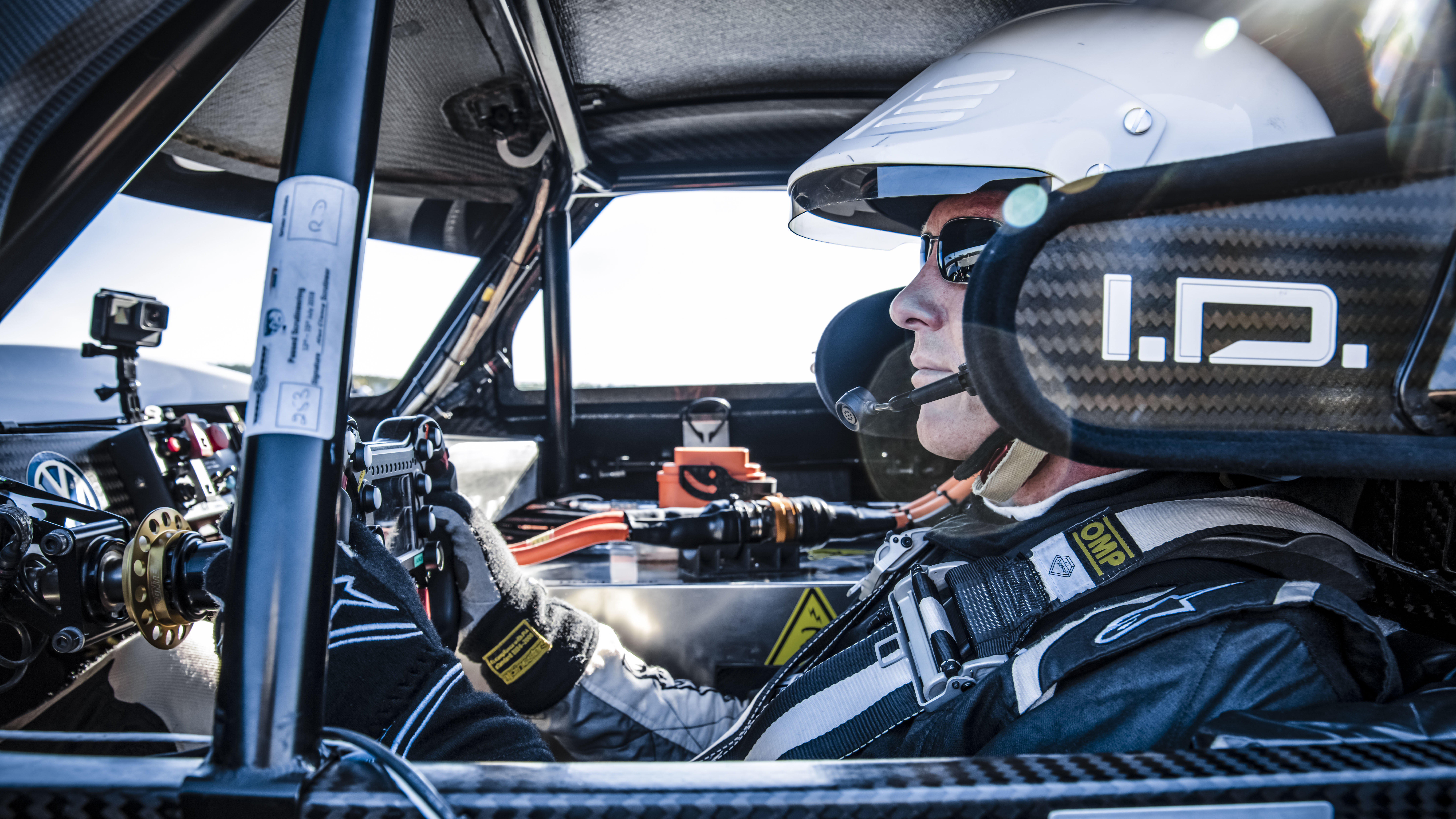 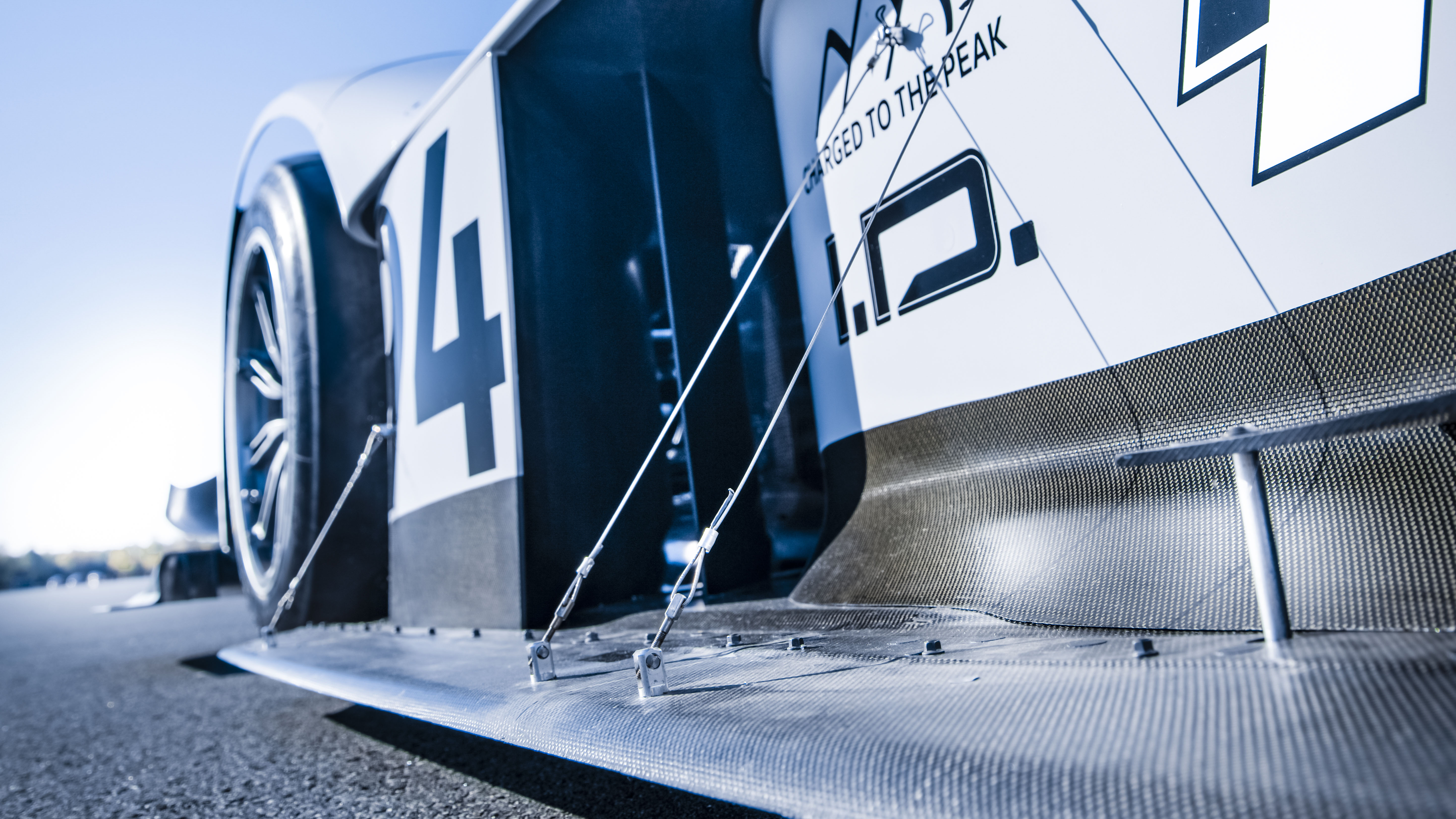 How much downforce exactly?

Can’t be exact I’m afraid, as VW wouldn’t tell me. But Ahrenholz did say this: “It’s more than an LMP1 car, certainly more than the car weighs.” Ceiling drive, anyone?

It’s the rear wing that gets me…

It’s so out of proportion to the car that it took a while before I could drag my gaze away from it and realise just how oversized the other aero devices are as well – the front dive planes are like dinner plates, the splitter could have come from a road-grading machine, the side skirts protrude so far outside the wheels they need wires to prevent them deforming as the air pressure lowers underneath at high speed.

The doors look awfully small. How do you get in?

Through the roof. Yep, although the doors come off, there’s not enough room between the frame and seat arms to fit a helmet. So instead you have to perform a gymnastic hop over the roof rail and wriggle yourself down through a tiny gap to drop into the cockpit. It is decidedly snug. Comfortable enough, but it quickly became clear I am a much chunkier build than Romain Dumas.

It only takes a few minutes for me to learn what I need to know. There’s a four-strong strip of buttons and toggles that I need to operate in the correct sequence (left to right) with pauses in between: main ignition, low voltage systems, high voltage systems then main drive. Driving itself is utterly simple: accelerate, brake and steer. What concerns me are the thick orange hawsers that run atop the battery to my right.

Concerns that are in no way alleviated when I engage main drive and hear a jet engine begin to spool up.

Turns out it’s the water pumps to cool the electric motors, but my god they don’t half make a fuss. But then I’m away, off to play on a prairie-sized acreage of tarmac. And this is, as I mentioned at the start, A Very Good Thing. Because if you want to get to grips with a car capable of pulling several G, the last thing you want is to be on a wriggling ribbon of tarmac with sheer drops on one side and trees and rocks the other. The only things I can hit, unless I try very hard indeed, are traffic cones.

The acceleration is, frankly, painful. 0-62mph in 2.25secs, VW says. We had a camera running in the car (a film will be out soon), and I tried to talk as I accelerated. So I nailed the pedal, all four massive Michelin slicks span, smoke trailed off the front wheels and then I blasted through it with a smash of energy so vicious it felt as if the I.D R had been rear-ended. By the time I’d remembered to look at the speedo, I was past 80mph, and by the time my mouth had framed the words, we were over 100mph.

Do you get used to that?

Slowly, yes. After ten minutes or so, once the tyres and brakes were fully hot, I adored the way it compressed the distance between corners, relished nailing the throttle wide open. And the brakes, well they were even more astonishing. Try though I really, really did, I never managed to get them to lock up, not least because my face was busy falling off the front of my skull at the time, and I found that rather unsettling. Couldn’t tell what was mechanical and what was motor recuperation, but the force of the stopping was beyond anything else I’ve ever felt.

I even got used to the mechanical grip through medium speed corners. The slicks were immense, not just for the grip they offered, but the precision of them, the way that, even when accelerating hard, I could choose whether I wanted to clip the edge of a cone or not.

I suspect that was down to geometry, steering and suspension control as much as tyres. If there’s one thing I’d want while barreling up Pikes Peak at an average speed not far short of 95mph, it would be precision. So it’s super-accurate and positive to drive, with wonderful steering and I very quickly build trust and confidence in it – something I’ve never previously experienced in an electric racer. I’ve found it hard to meter out the power before, to work out how the noises, or lack of them, relate to what the car is doing.

But the throttle calibration is superb here, and a couple of times through medium radius bends I even overdo it, provoking a nasty spit of lift-off oversteer. That’s more alarming as I’m basically switching the aero off, at which point I feel the car physically pop-up as the suspension unloads. Takes a bit of gathering up.

What about through the high speed stuff?

Ah, that was something else. I fall asleep. In all seriousness. There’s one bend out here I can take at near max speed, and because I can, I just shut off the self-preservation voices in my head and turn-in hard. And the car simply… turns. Without delay or scrub or slip. My head, body and internal organs follow the laws of centrifugal force. The split second after turn-in is alarming, terrifying even, but then, because the corner is long, my brain does something funny. It relaxes. It tells me all’s fine and I should take some time out, kick back, have a nap.

And then, as I straighten up, my brain snaps back to attention, synapses whirr and I wake up gasping, as if I’d had a nightmare and sat bolt upright in bed. It’s weird.

When I pull over for a rest I ask Dieter Depping, the car’s test driver (and the only bloke besides Romain and I ever to have driven the car) what’s going on. He informs me with a smile that what I’m experiencing is G-loc – loss of consciousness through g-force. That’s the kind of cornering speeds the I.D R is capable of delivering. It’s mad.

What did Romain Dumas make of it?

This, let’s not forget, is a man who’s won Le Mans in a Porsche 919. He described the I.D R as the “most impressive car I have ever driven in competition”. He also said “I thought I was sitting in a rocket”. I now know where he’s coming from. The I.D R is an astonishing bit of kit.

And its life isn’t over yet. VW admitted to me that next year we’ll see it again. They wouldn’t say if they were going to develop it further, but they did say that the Goodwood hillclimb was unfinished business. I’d like to throw another one out there: the Nürburgring. Pikes Peak is 12.42 miles and 156 corners and the Ring is 12.9 miles and about 160 corners. Come on VW, you know you want to.