Review: the Hyundai Ioniq in hybrid and electric form 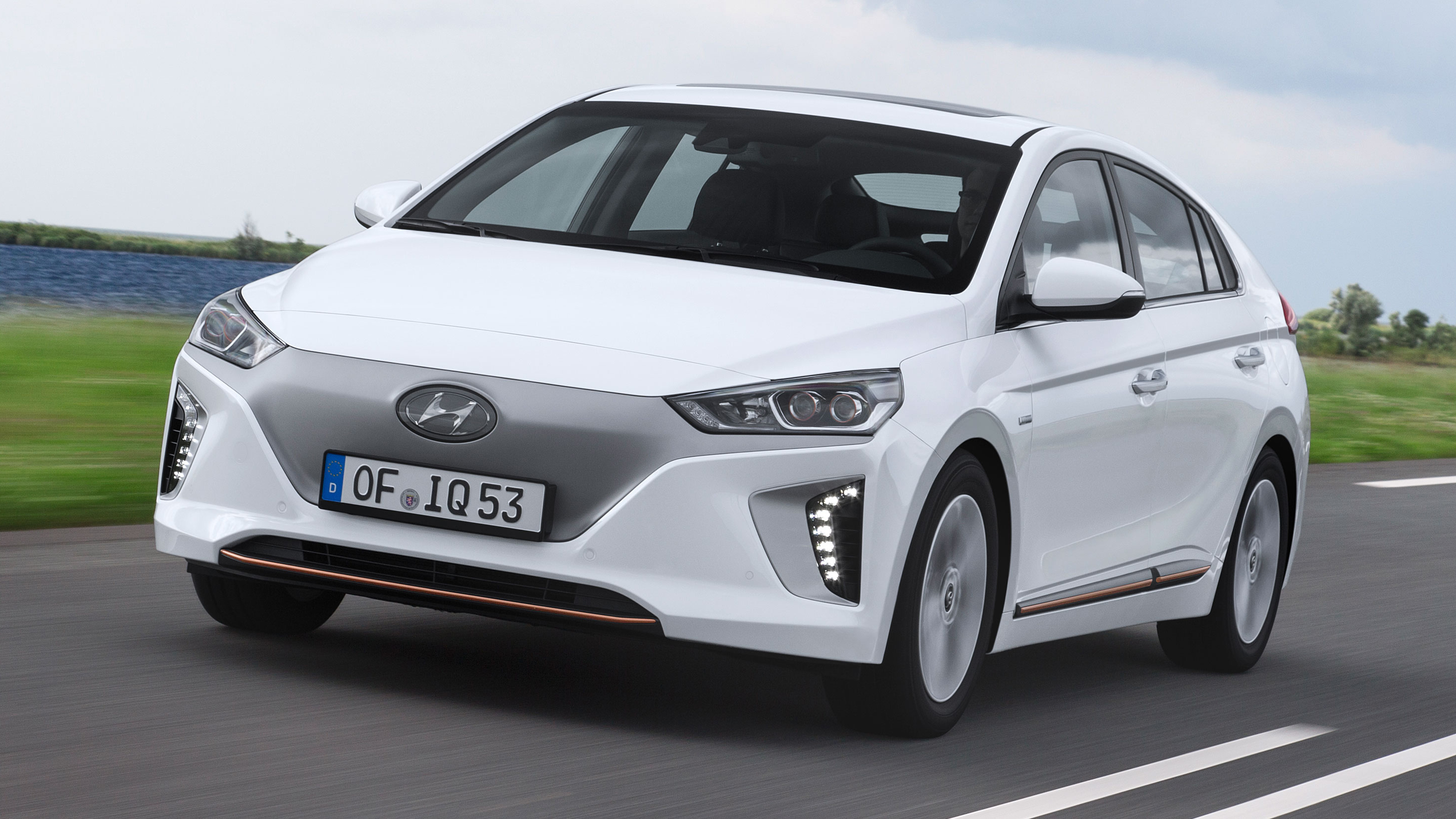 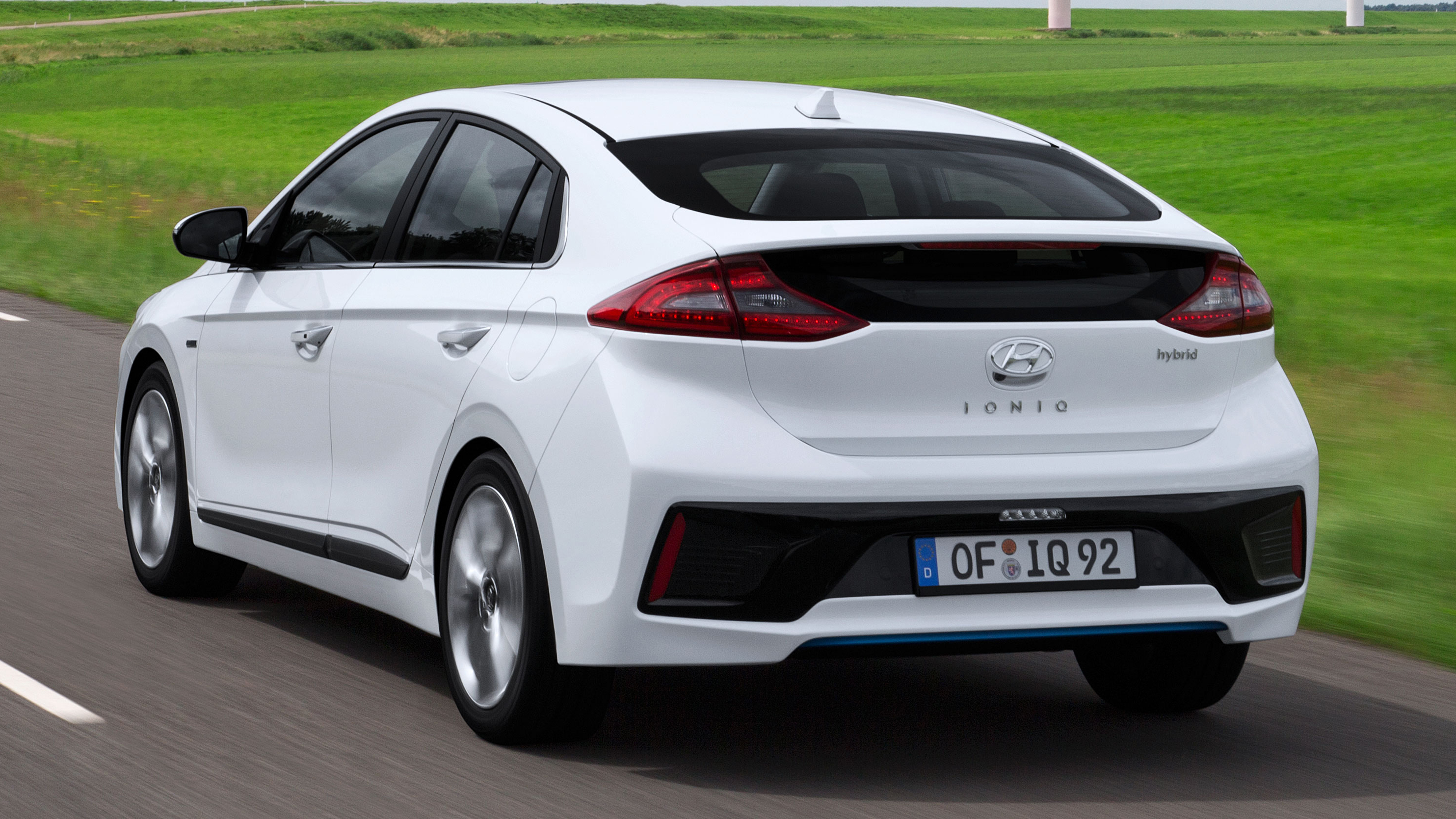 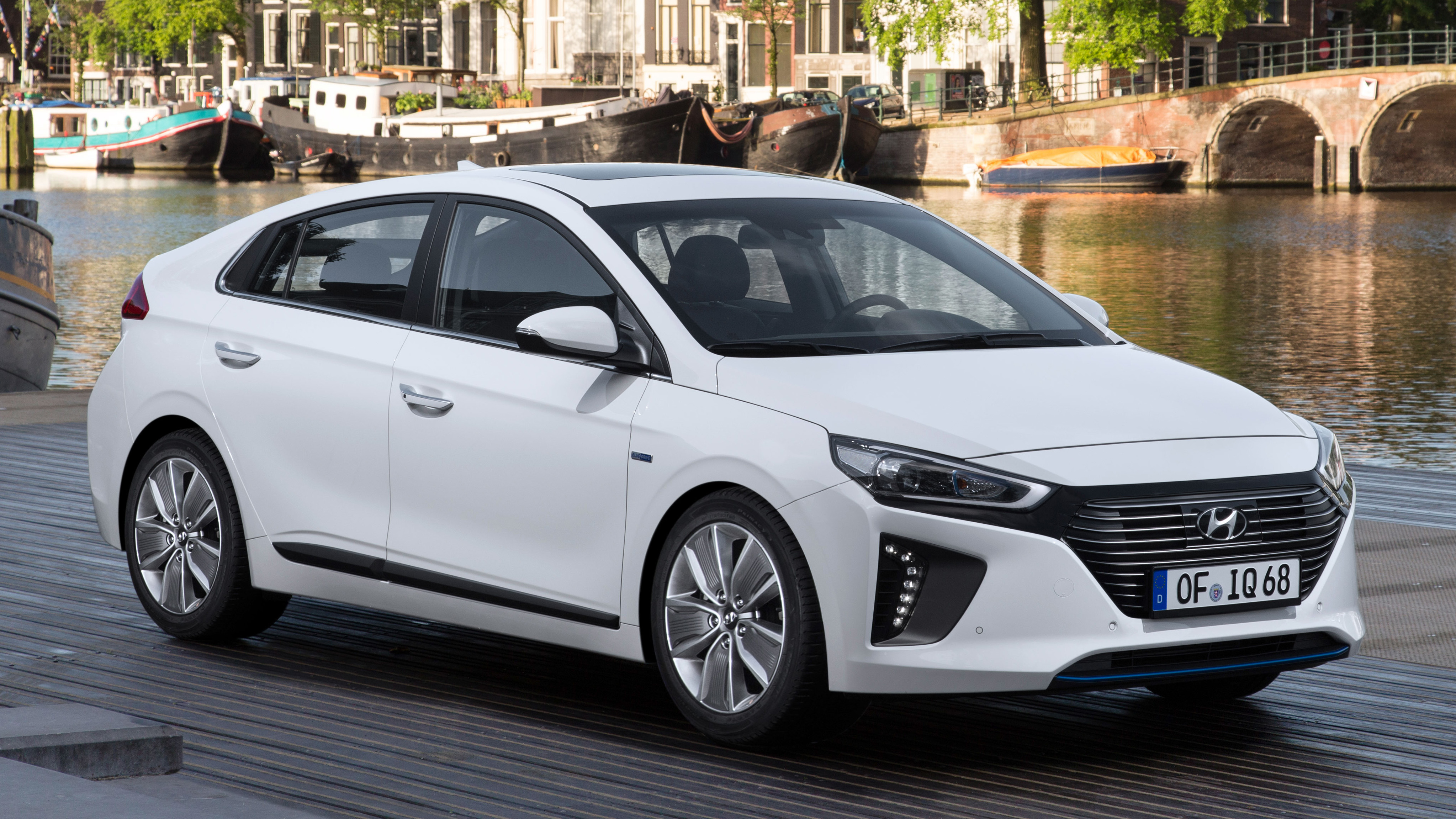 The Hyundai Ioniq. As you can tell from the slippery teardrop shape, it’s a Toyota Prius rival. But it’s also a Nissan Leaf rival. And even a VW Golf GTE rival, at a push. But not all at the same time, in the same car.

Can you explain in a sentence?

Here goes: the Ioniq has been designed to accommodate three different powertrains; you pick the one that best suits your life. How’s that?

I’m with you. Right, what are the powertrains?

Let’s kick off with the pure EV, imaginatively titled Ioniq Electric. In the pictures, it’s the one with the smooth grey nosecone instead of a grille, silver bumper trim and copper-coloured cabin flashes instead of blue in the hybrid versions. Because copper = electric wires, y’know.

The interior cries out for these touches, because it’s a pretty unremittingly conflagration of scratchy, harsh grey plastics. Build quality and ergonomics aren’t an issue, but the materials themselves are off the olden-days Korean hatchback reject shelf.

The car drives its front wheels with a 118bhp, 194lb ft electric motor that draws juice from a 28kWh lithium-ion polymer battery tucked under the rear seats. In Eco and Normal mode, this means 0-62mph in 10.2 seconds. Maximum claimed range is 174 miles – competitive with the revised Nissan Leaf and BMW i3.

Prod the Drive Mode button twice and you’ll enter Sport mode, which jazzes up the virtual instruments and tips a Red Bull into the battery pack. Maximum torque kicks up to 217lb ft, and the Ioniq’s 0-62mph time drops to 9.9 seconds. Top speed? 103mph. Don’t worry Elon, there’s not so much as a Slightly Silly mode here, let alone Ludicrous.

It’s fine, without feeling it’s moved the EV game on. Even in Sport mode, the Ioniq Electric lacks the 0-30mph zip of a Nissan Leaf. Keeps up with traffic fine, and it’d bother a VW Golf Bluemotion in the world’s most boring Traffic Light GP, but ‘adequate’ is as generous as the performance praise gets. Quiet, though – no whining inside and so silent on the outside it emits a Tron-spec ‘vuuuuum’ as you whirr along to ward off jaywalkers.

Ordinary steering wheel paddles are deployed to select the severity of regenerative braking – I found level 3 of 4 the best compromise for juicing the batteries while not winding the passenger against his seatbelt.

Though the car claimed a full charge when I got in, the estimated range was only 129 miles. Hmmm. This was on a fairly hot day with the air-con running. After 47 miles of sweaty fast A-road and motorway work (hardly its comfort zone), the computer promised 83 miles was left. So that seems accurate, at least. 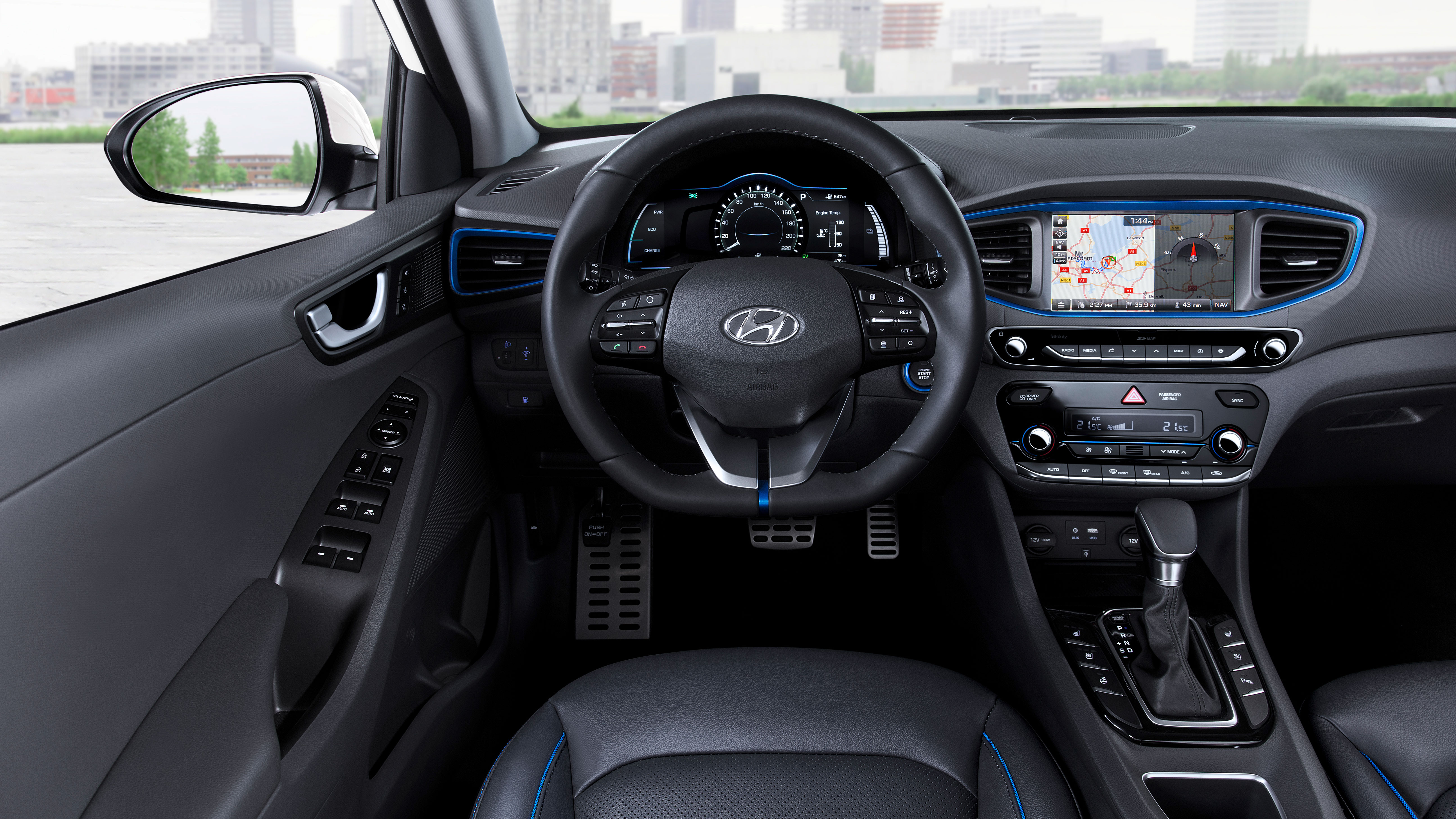 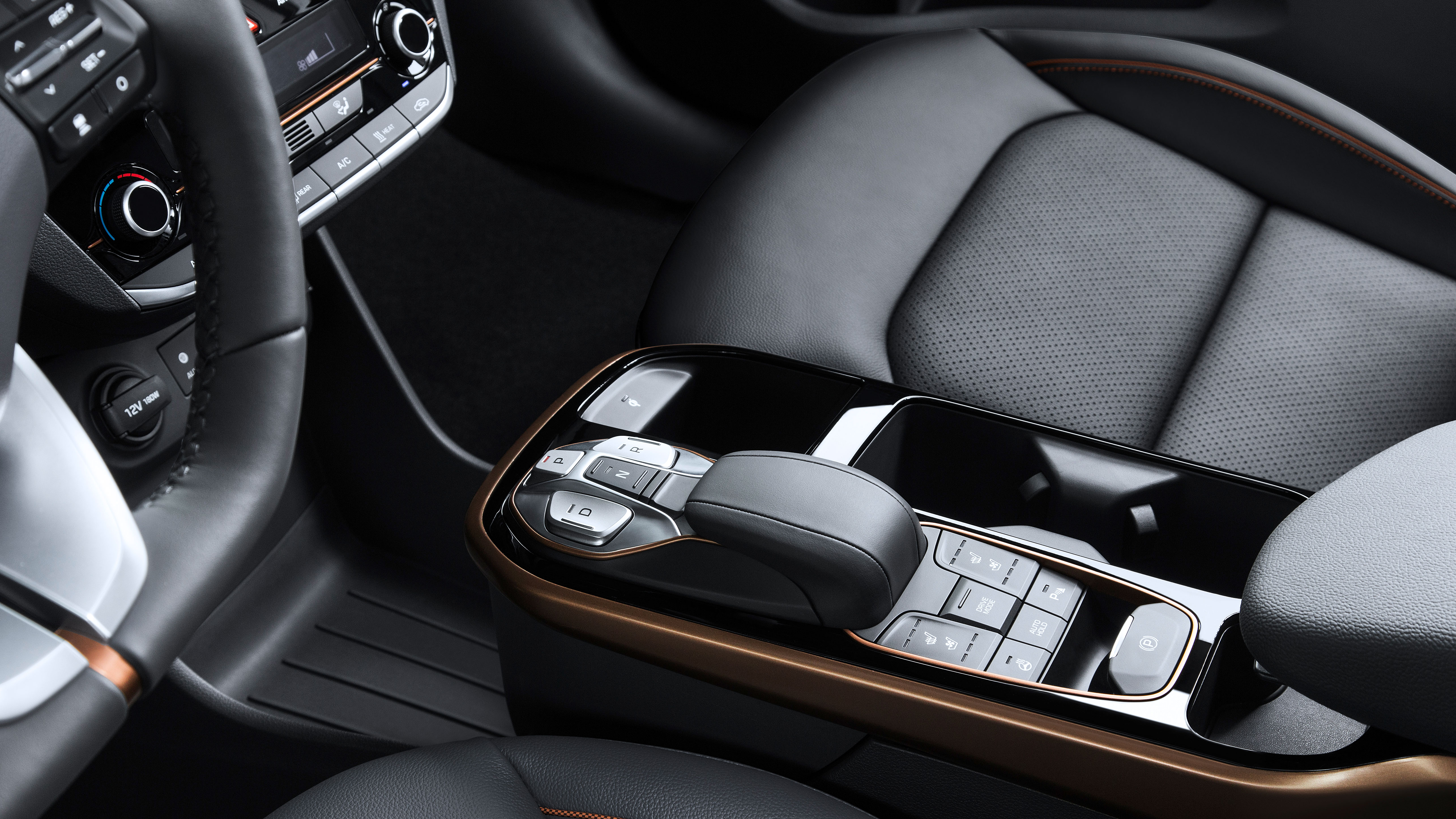 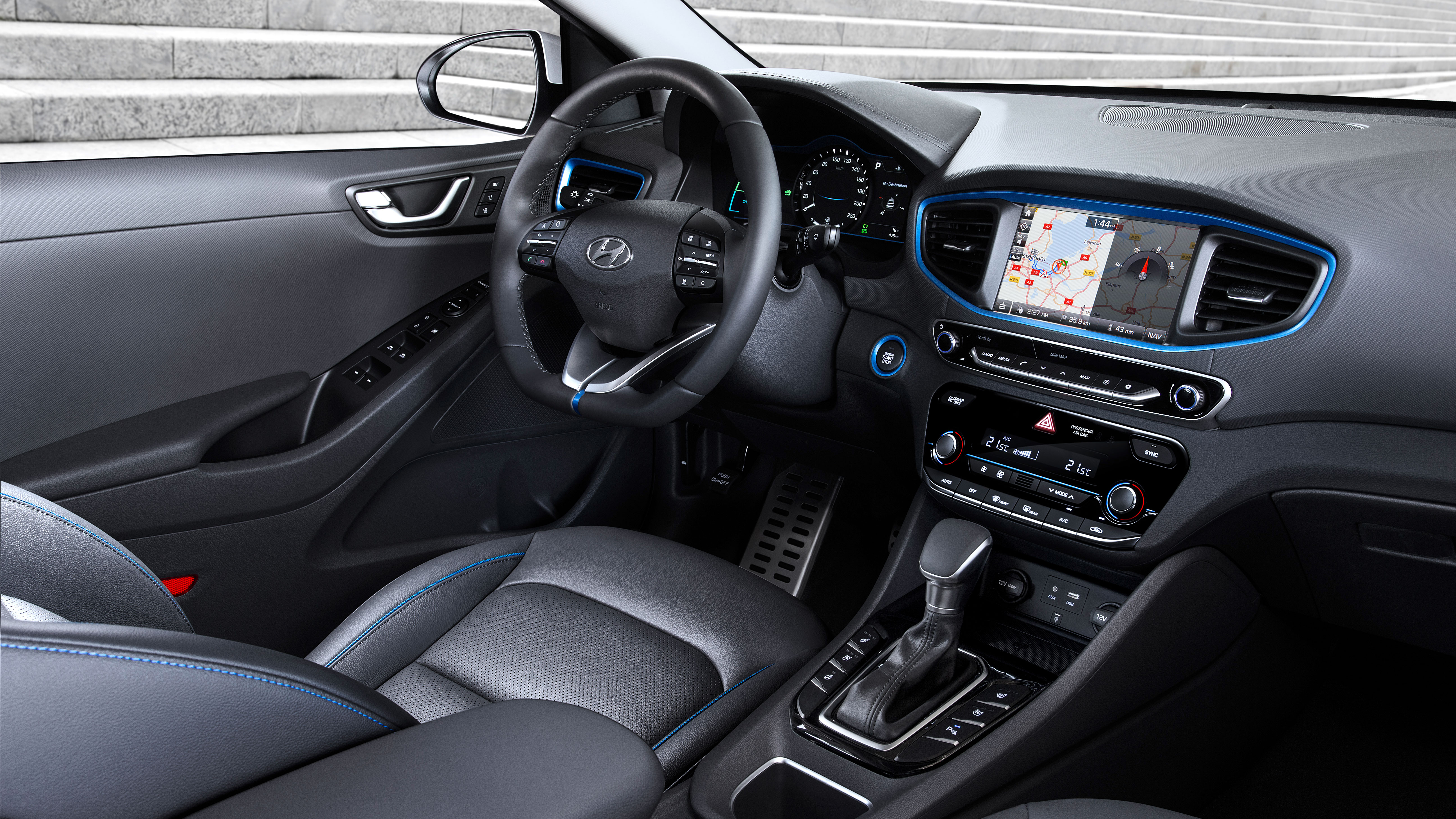 And it’s not a battery-leaden pudding in the corners either. Okay, the centre of gravity doesn’t feel anywhere near as low as Hyundai’s engineers protest (‘lower than a Golf GTI’s’ is the soundbite), but it’s easily agile and fleet-footed enough for whatever most minicabbers will throw at it. As long as they’re not put off by Hyundai’s typically twangy steering, which is assisted by a giant tangle of rubber bands hidden in the steering wheel. Apparently.

Poor cabbies. It does look like a bit of an Uber chariot.

Yes, because it looks like a Prius. Or at least, the Prius when it was bland. But Toyota’s petrol-electric brainchild has properly cornered the modern market for inner-city ride sharing, so that’s what Hyundai’s Ioniq Hybrid has to be aiming at.

Choose from two versions: the regular full hybrid, and the plug-in version. Well, I say choose, but if you want the wall-socket version with longer electric legs, then hang about until 2017. The standard hybrid’s available now, with prices starting at £19,995.

That’s outrageously aggressive pricing, pitching the entry-level version around £4000 cheaper than an equivalent Toyota Prius. And there’s a lot of kit as standard. Then the news gets even better.

The key reason you’ll prefer the Ioniq to a Prius is the gearbox. Chiefly because unlike the CVT-hamstrung Toyota, it has one. Toyota says economies of scale, bulletproof reliability and supreme efficiency make CVT the natural choice for its hybrids, but new kids Hyundai have decided not to bother following 20 years’ worth of logic, and given the Ioniq Hybrid a dual-clutch gearbox.

Actually it isn’t much of a contest, because having conventional gears on board makes the Ioniq far more intuitive and more responsive. Requests for acceleration are met with a modicum of movement. With 103bhp from the four-pot engine and a total system output of 138bhp, it’s good for 0-62mph in 10.8 seconds and 115mph.

But I don’t buy a hybrid for driving thrills.

Exactly. All that would be futile if the heavy gearbox was sapping those precious fuel savings. Well, I drove the Ioniq Hybrid for around 40 miles, repeatedly enjoying (it’s all relative) the novelty of throttle pedal movement being translated into actual go, and it averaged an indicated 64.2mpg. Not too shabby. Better than what I’ve scored in the latest Prius, for instance. Hyundai claims 79g/km of combined CO2 emissions.

Handover between e-motor and engine is smooth and near-silent, but it’s still very tricky to make progress without triggering the engine. You’ll need the plug-in version for that, coming next year.

Powertrain-wise, yes, and price-wise, absolutely. But you can see where the corners have been cut. There’s the questionable trim and cramped rear seats which sacrifice chunks of headroom for that air-smoothed roofline.

For a car that could live or die by how easily it swallows, er, unsteady rear passengers, that’s not good news. I think we’d still plump for the Ioniq Hybrid on balance, for its less wearing drive and pre-watershed looks. Either way, the Prius no longer has this taxi rank to itself.