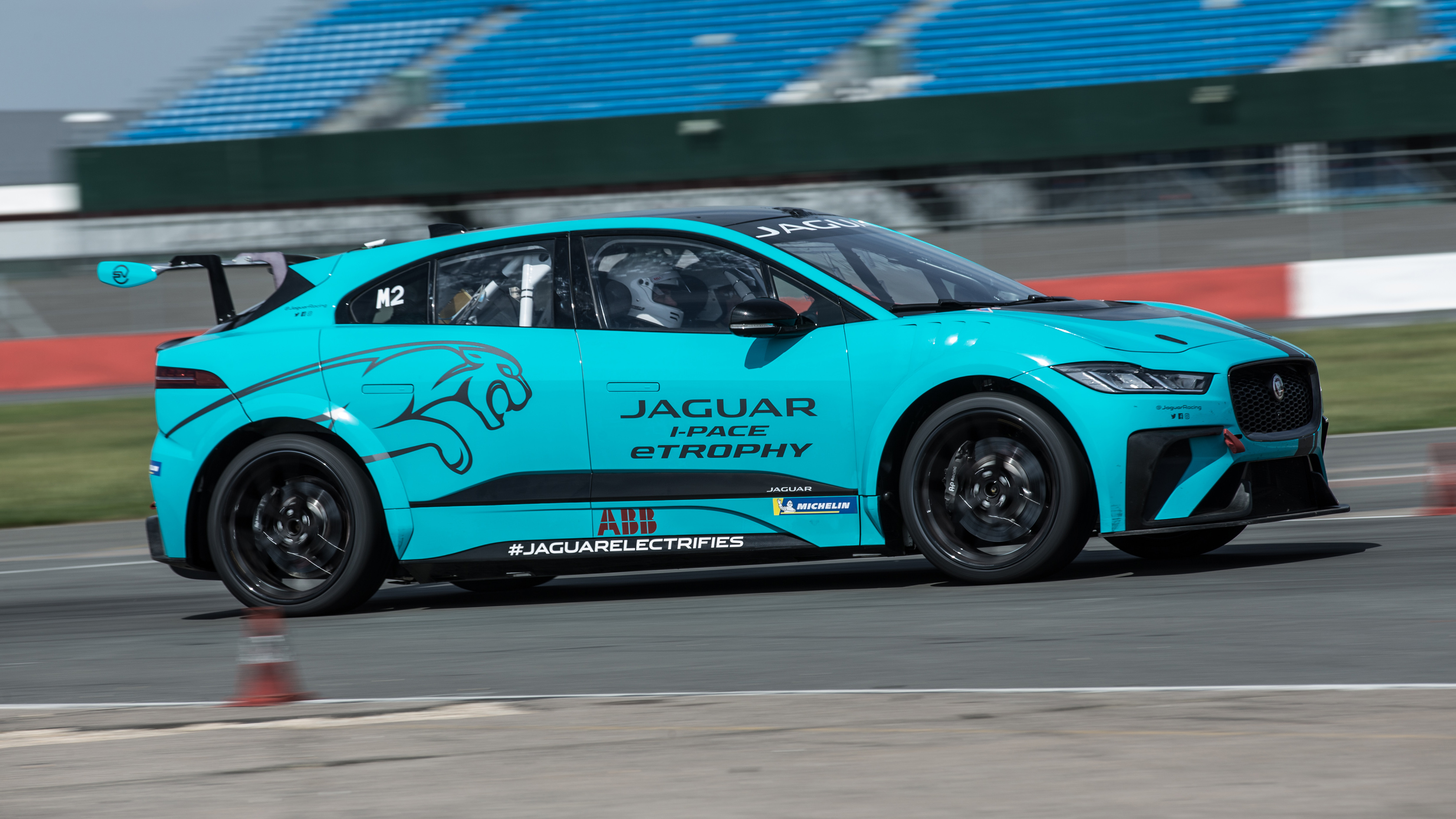 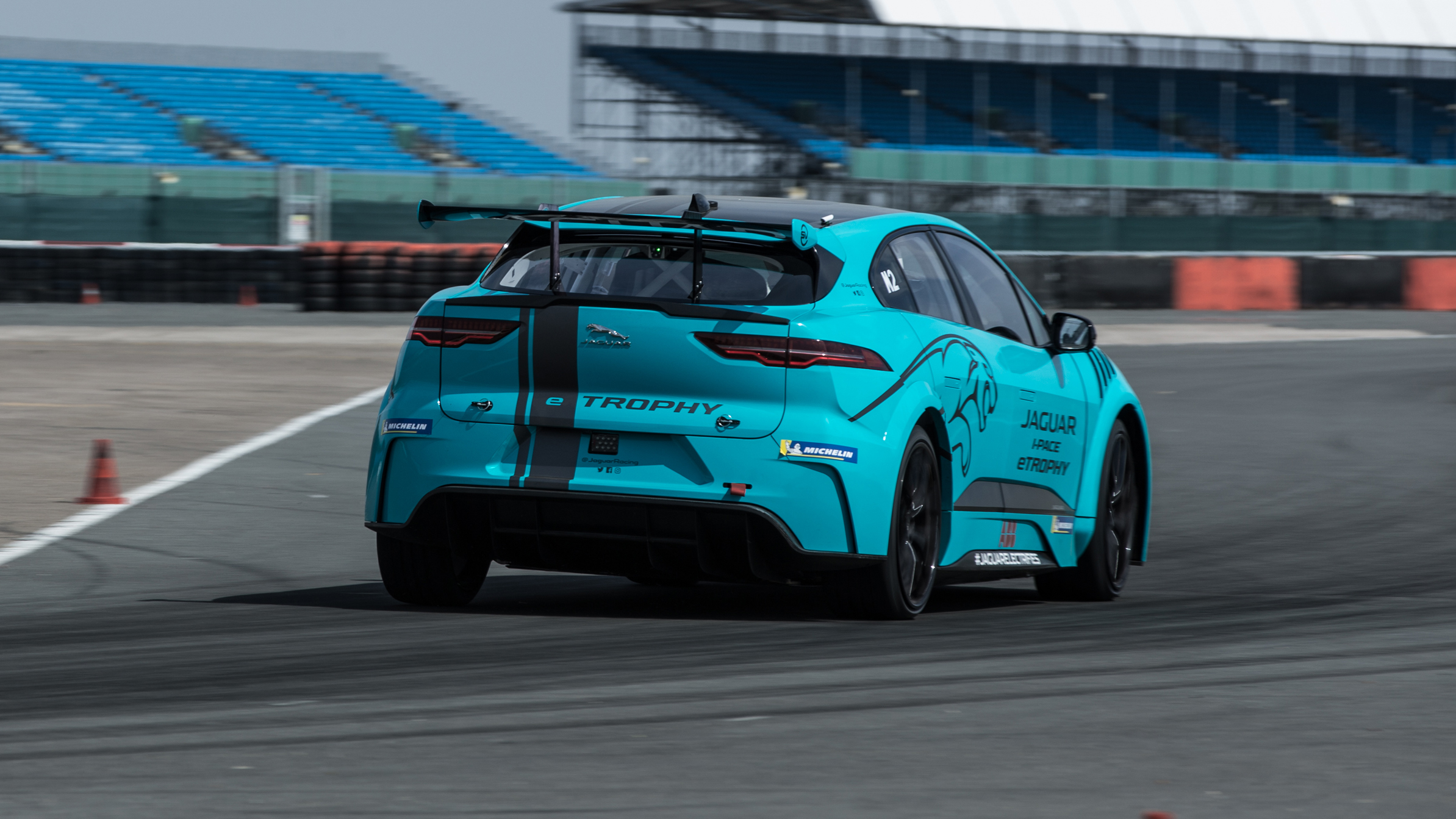 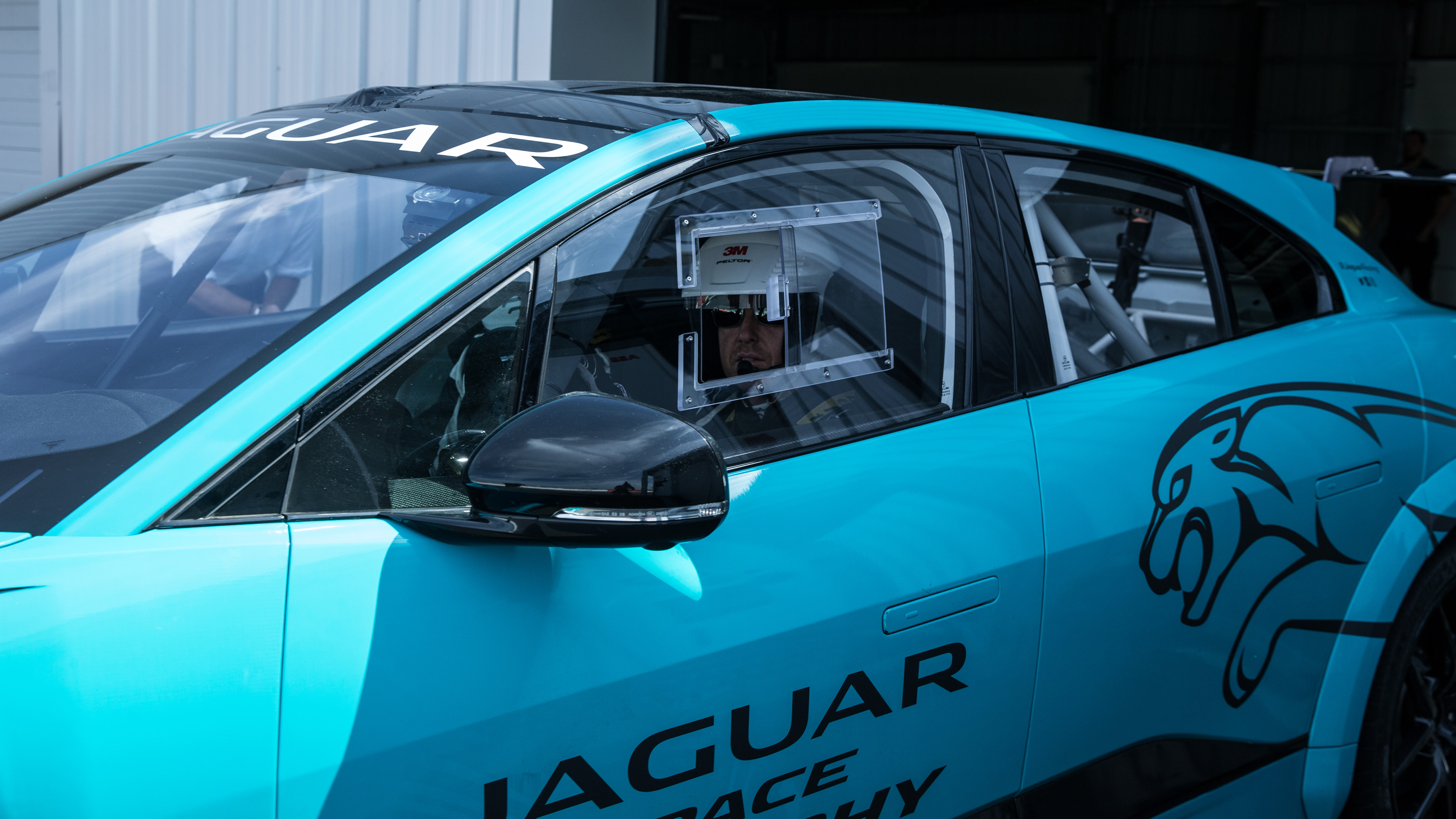 An I-Pace racer? Jaguar isn’t hanging about is it?

Indeed, the I-Pace road car only went on sale a month or two back and yet here’s a racing version already.

Is it fast? Quicker than a Tesla Model S P100D?

Unfortunately not. It’s closely aligned with the flagship EV400 I-Pace, using the same battery pack, inverters and motors. So still 395bhp and 513lb ft, and the same 4.5sec sprint to 62mph. Top speed is just under 125mph.

125mph, that’s not going to be much good on the Mulsanne straight!

Never going to go there. The I-Pace eTrophy is for a one make racing series that will support the Formula E championship at ten rounds of next season’s calendar (which starts this December). So think tight and twisty street circuits where the lack of noise is a boon and the tighter tracks keep speeds down and the racing close.

The plan is for 20 of these to be on the grid. It’s going to be carnage. Jag should make a killing from smashed carbon body panels (the doors and roof are carried over, but bumpers and wings – the vulnerable bits – are now carbon). Katherine Legge has already signed up to race. It should be a spectacle.

Jaguar’s in-house SVO team. The racing cars will be built from standard road cars, converted at SVO’s Ryton HQ. Although the mechanical package is mostly carried over, a lot of work has gone into tuning the electrical software.

The teams that buy the cars won’t be able to adjust the torque maps, but they will be able to switch between four maps, 11 ABS settings and adjust the suspension, anti-roll bars and rear wing – not that the last will make much, if any, difference.

The brakes are from AP Racing and Jaguar is leaving the regenerative braking in place, so once the battery level drops off full, you will be recharging – about 65 per cent harvested from the front, 35 rear. Chris Gradon, project development engineer for the eTrophy, tells me they’ve been running the torque split 50:50 until recently, but are now feeding a bit more to the back axle to help resist understeer. The diffs are open – no LSDs here, the tyres are from Michelin. Not slicks, but road legal Pilot Super Sports.

Really? On a racing car?

Yeah, I was sceptical too, but it actually drives pretty well on them. The races will be about 20-25 minutes long and I reckon after 10 minutes the tyres will start to overheat and go off, but that’ll just mean the I-Paces start to slide around and driving techniques will have to change to cope. Should be fun to drive and fun to watch.

Is it easy to operate?

Super simple. One forward gear, so once rolling you’re either accelerating or braking. It’s a big car, much wider and longer than its hatchback shape would suggest, and you’re aware of the echo chamber out back. Clean cabin, knobs on the steering wheel to adjust the ABS, engine maps and so on.

Electric racing cars are a challenge because you simply don’t get the sensations back from the car that you do with petrol. With that you get the noise, vibration, you know where you are in the revs, exactly what throttle response will be and what to do.

The I-Pace has no steering feel and throttle modulation is tricky because of the instant torque characteristics of the e-motors. But you get used to that. The thing I found most challenging was throttle modulation through long corners. It was hard to work out how much more you could give it. In the end I decided to give it too much and then use a bit of left-foot braking to trim it back into line. Sort of worked, but still a workaround solution.

Cornering itself is fun. A low centre of gravity and a front end with surprising bite (despite the lack of steering feel) mean it turns in well, and is nicely balanced too. It’s not a fan of trail braking, which unloads the rear wheels and causes them to slide. Better instead to get it slowed in a straight line and then carry momentum in. It’s got good grip, and holds a nice line on a neutral throttle.

Powering out will get you some understeer in slow corners, and as I said earlier, it’s tricky to pull it back into line because you don’t know precisely where you are with the throttle. Never mind, you can string a smooth lap together and it manages its weight well.

Stopping first. Whatever Jag has done to the brakes to incorporate regeneration smoothly has worked a treat. Once I had the confidence to attack the brakes I always knew exactly where I was with them and never noticed the regen interfering. The AP racing brakes – from an Aussie V8 Supercar – were mighty, too. And when the ABS interfered, I just turned it down another notch or two.

The acceleration is pretty plain though. I never understand people who get excited about Tesla acceleration, because it’s just a number. There’s this big shove in the back that gradually tails off and nothing else. Same here, with smaller numbers. The eTrophy is rapid-ish, but it’s only the torque push out of super-tight corners that’ll impress you on a circuit.

How much weight is it pushing along?

Interesting. If someone had asked me I’d have guessed around 1,600-1,700kg. I was wrong. The official weight is 1,965kg, and unofficially it’s the wrong side of two tonnes. Like I said, those tyres are having to work hard for their living.

And what about cost?

That’s a lot for a total of around 250 minutes of racing (over two grand a minute, in fact). I think Jaguar is reckoning that the rising prestige and popularity of Formula E will attract blue chip sponsors to the support race as well. That remains to be seen. The value in the racing here is not in the cars, but the advertising potential.