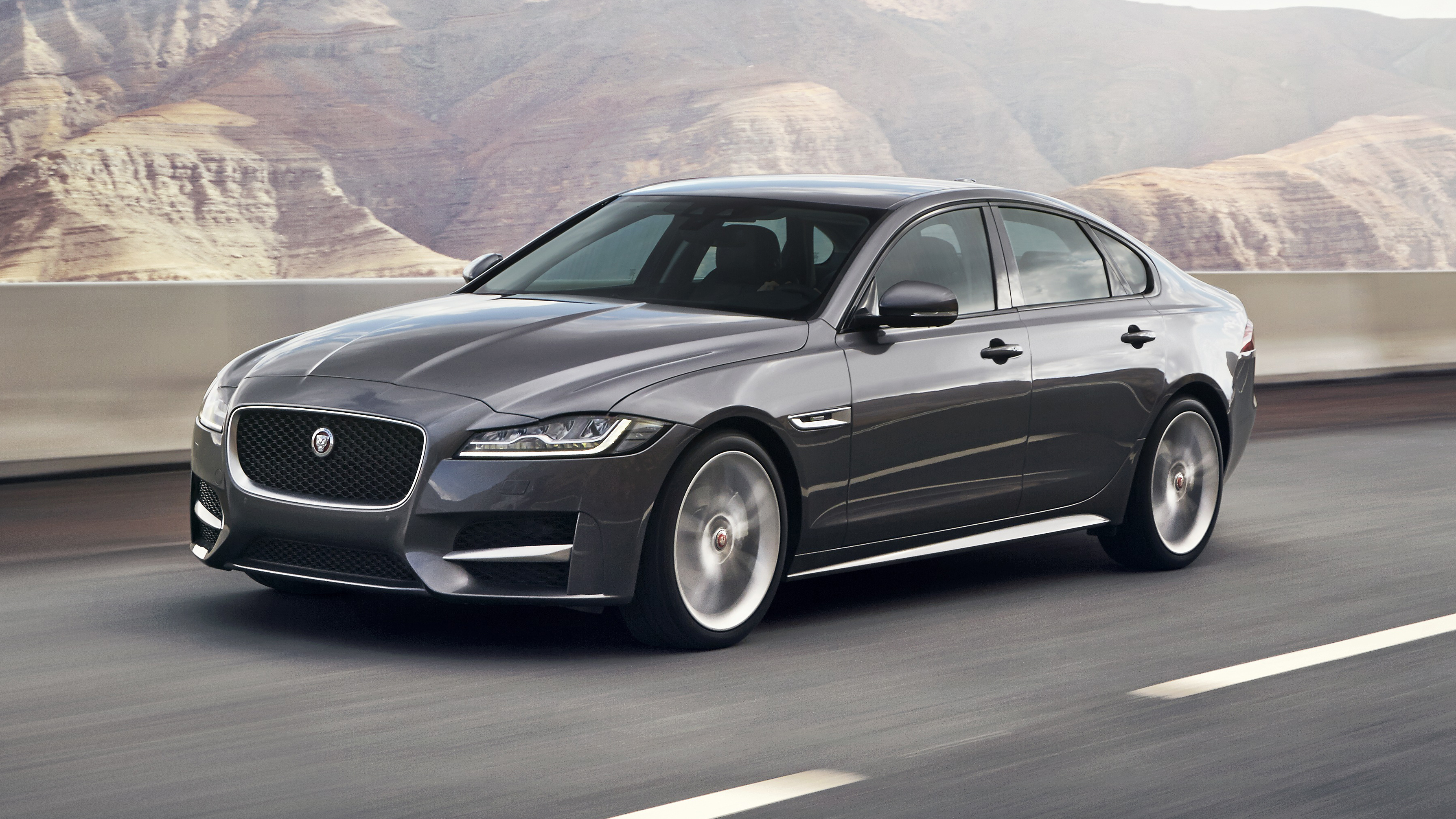 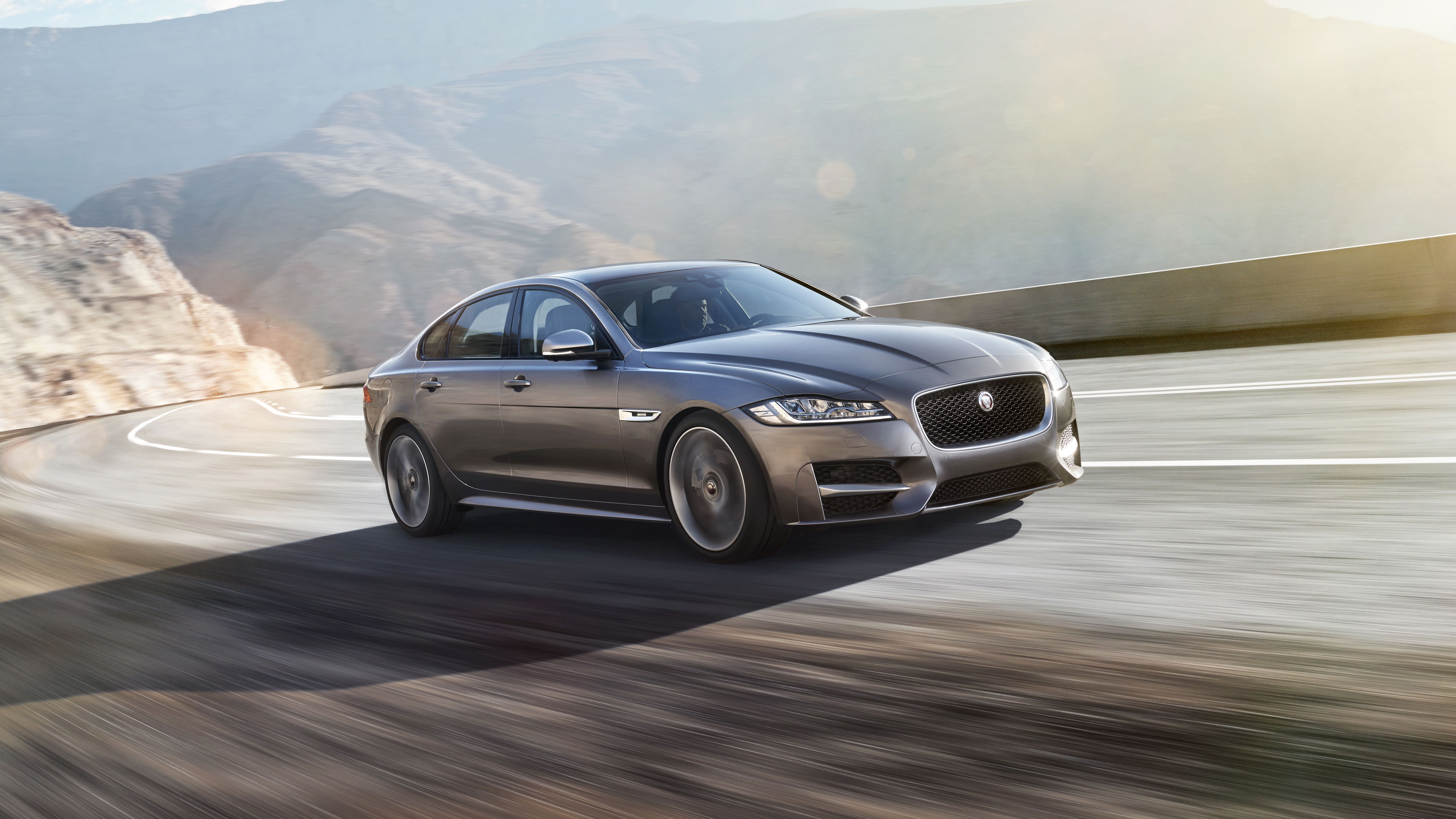 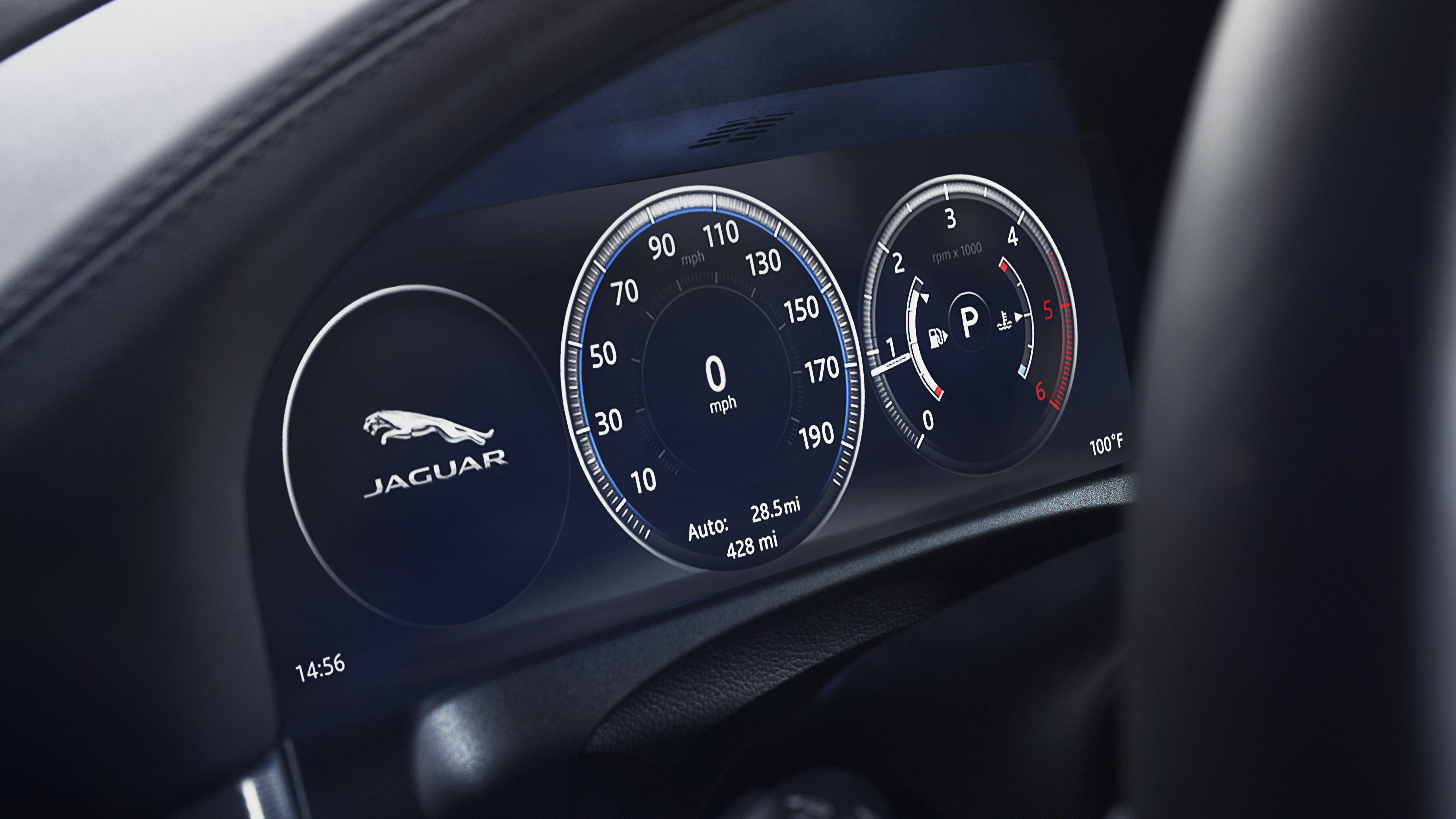 Wow. Jaguar isn’t hanging about. The XE is only just landing on British roads and now they’re wheeling out its big brother. To which it bears something of a distinct resemblance…

Yes, maybe there is a bit of the Russian doll about it. Surprisingly, this is the first Ian Callum-designed Jaguar to replace a Callum-designed car (the F-type effectively replaces the XK – remember that?) The old Jaguar XF’s shape managed to distract you from its reheated S-type underpinnings, but it was miles away from the class best in terms of its packaging. The new XF is much roomier while being shorter and lower overall. It has a tight front overhang, and the guys didn’t fall asleep by the time they got to the rear – it’s lovely, with a ‘sixth light’ rear window and a chiselled boot line. It’s slippery too – Callum says that the drive for efficiency is going to return aero to the top of the list of demands – which might account for its slightly generic looking silhouette. But in the right colour and wearing a decent set of alloys, it’s very handsome indeed.

Presumably it uses the same hard bits as the XE underneath.

Indeed, and they’re class leading in terms of engineering effort and investment. The XF is 75 per cent aluminium, the rest of it a mix of high strength steel in key structural areas, with some magnesium in there too. Its body-in-white weighs a mere 282kg, and it’s 28 per cent stiffer and 11 per cent lighter overall than the previous car (that’s it not lighter still underlines how tricky it is to cut the fat). It also has an equally well-engineered, all-aluminium suspension set-up. Double wishbones at the front are familiar enough, but the rear uses an evolved multi-link system that separates lateral and longitudinal forces. Passive dampers are standard – they’re frequency dependent to enhance low-speed ride – and Jaguar has reworked the algorithms that govern its optional continuously variable active damping.

How good is it to drive?

It isn’t just good, it’s a revelation. The XF really has located the sweet spot where compliance and handling agility overlap, a point initially confirmed by letting us loose on the Navarra circuit in northern Spain. Even a top-spec 375bhp supercharged XF isn’t really the sort of thing that should work around here – few standard road cars could hack this place – but it does.

The 296bhp diesel is better still. Our road test route mixed twiddly mountain terrain with lovely fast-flowing sweepers. All six-cylinder XFs get configurable dynamics, which remaps throttle response, improves steering feel, and quickens shift times on the ZF eight-speed auto, but even in regular mode this is a world-class drive. Having 516 torques obviously helps, and fourth and fifth are enough to do the job. It resists understeer in all about the tightest hairpins, and there’s barely a chirp from the tyres, no matter how hard you’re going. The electric power steering has surprisingly good feel and clean, linear responses. Jaguar also claims 51.4 mpg overall and just 144 CO2s. Cake and eat it time.

What about inside? Scaled-up XE or something smarter?

There’s no doubt that the challenge in this media-saturated age is to pare down the umpteen interfaces to the essentials, and the XF’s cabin manages this almost too well. Its InControl Touch system features an 8in touchscreen as standard, the optional Pro set-up increasing it to 10.2in. It has the swipe and pinch functionality of a smartphone, all the now expected but tricky-to-perfect audio/phone iOS/Android connectivity, there’s powerful in-car ethernet, and Intel quadcore microprocessors give it more firepower than you’d find on an Airbus A380. Jaguar’s guys have also been flip-flopping between Coventry and California in an effort to give the new XF a whole heap of Apps to keep you amused. Who knows, somebody might actually use them. Fundamentally, we’re not sure the XF’s interior is quite as special to look at or sit in as it should be, and the sat nav on one of our test cars suffered a total meltdown. Other than that, it ticks all the boxes, as well as others we didn’t even know existed.

Speaking of box ticking, how does the range roll out?

The XF hits the market in the expected guises, including SE, R-Sport, Portfolio and S equipment gradations, featuring Jaguar’s vaunted new InControl multi-media connectivity hard- and software, and powered by two versions of the new Ingenium 2.0-litre turbodiesel (161bhp or 177bhp), a 237bhp 2.0-litre petrol, 296bhp 3.0-litre twin turbodiesel (just the 516 torques from that bad boy), and two flavours of supercharged 3.0-litre petrol V6 (335bhp or 375bhp). You can also choose between rear- or all-wheel drive. A 550bhp-plus SVR will be along soon, but no word yet of a Sportbrake.

We think so, although as ever only a back-to-back comparison will clarify that. But as well as the ride/handling/looks heart stuff, Jaguar has gone to huge lengths to nail all the bean counter bits that really control the decision-making in this market sector. Its residual value after three years or 60,000 miles is predicted to comfortably outpoint the Audi A6, BMW 5 series and E-class Merc’s. It’s cheaper to insure than its rivals. And the two different five-year service plans – a 50,000 mile one costing £525 or a £750 75,000 mile package – see Jag putting its money where its mouth is in terms of its hard-won quality rep.