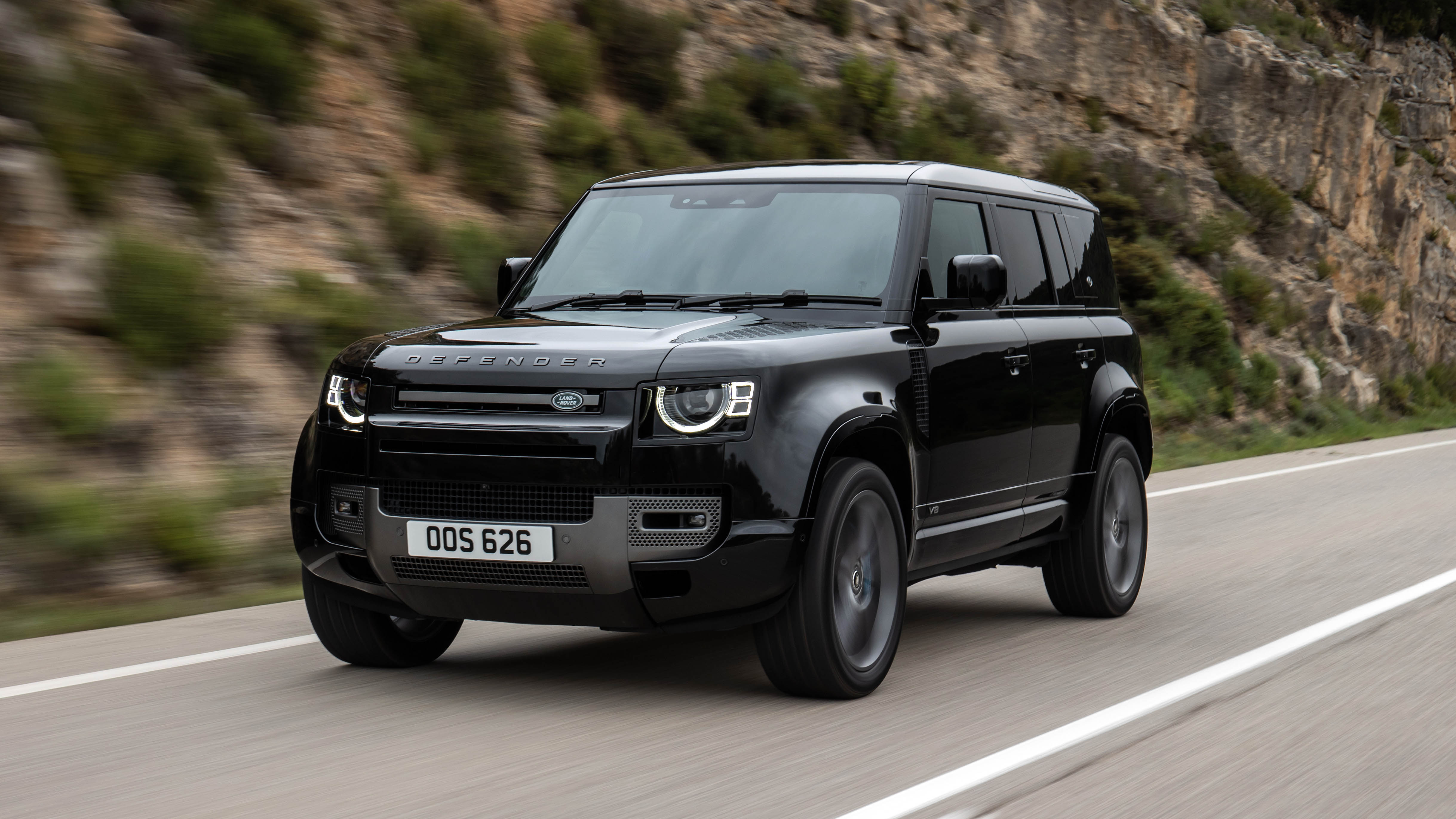 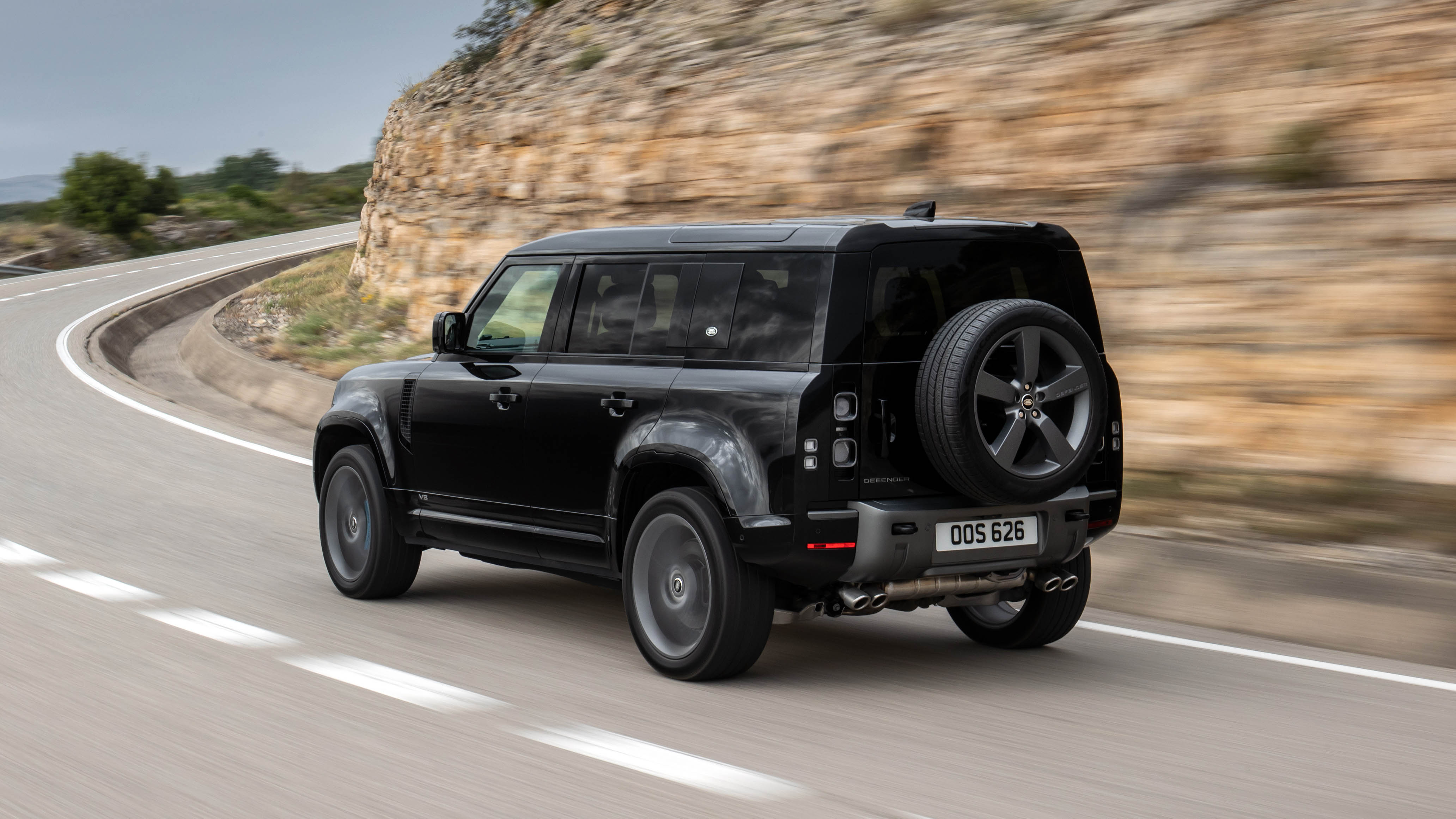 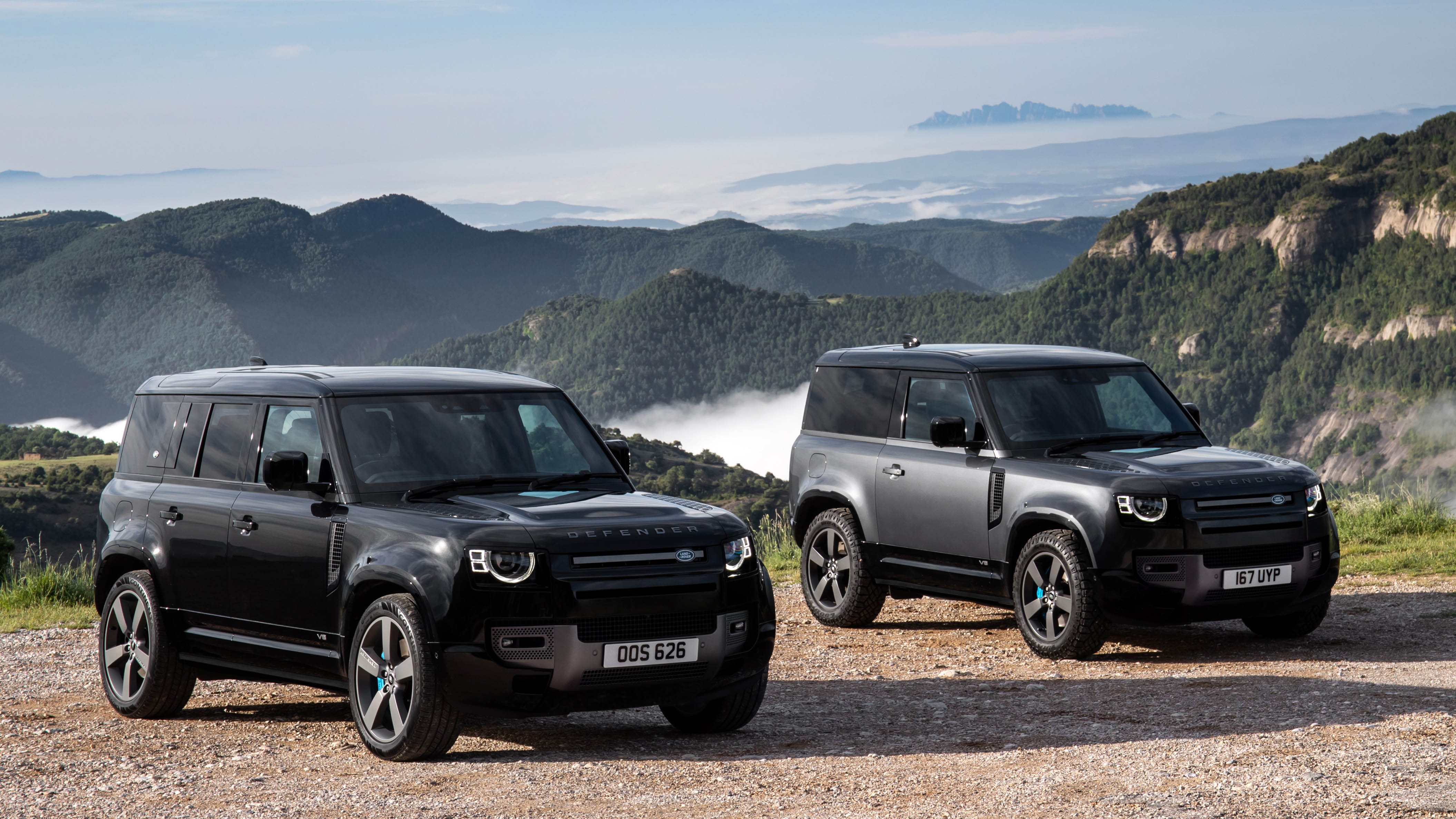 What’s all this about then?

Well, this wasn’t actually meant to happen, but we’re very glad it did.

The new Defender’s Programme Director Stuart Frith recently told TG that a V8 wasn’t even in the product plan when the project began eight years ago. The team with the unenviable (but at the same time impossibly exciting) task of reinventing Land Rover’s iconic 4x4 did build a couple of mules early on, though, and in the end it was just too good an opportunity to miss.

Officially this is badged the P525, and you’ll no doubt recognise the engine – it’s JLR’s familiar supercharged 5.0-litre unit that makes 518bhp and 461lb ft of torque in this instance. That power is sent to all four wheels (of course) and means the short wheelbase 90 can do 0-60mph in 4.9 seconds, whilst the larger 110 is just two tenths of a second slower. Not bad for something with the aerodynamic properties of a 1960s tower block.

Is it just a new engine, then?

Not quite. Land Rover has toughened up the Defender’s chassis and suspension to cope with the extra grunt – and weight – of the V8 (for reference, there’s 124bhp more than the six-cylinder P400). That means new larger diameter anti-roll bars, stiffer suspension bushes and bespoke spring and damper rates.

There’s also a new electronic active rear diff and a ‘Dynamic’ mode for the terrain response system that Land Rover says will unlock more performance on tarmac and loose surfaces. This is a good thing.

The smooth eight-speed ZF automatic gearbox is the same as you’ll find in all other Defenders, although here you get wheel-mounted paddles for manual up- and downshifts and it has been slightly tweaked for crisper changes.

So yeah.. it’s pretty much all about the engine?

Well yeah, fair enough. The P525 experience is dominated by that wondrous supercharged heart. There’s slightly less output here than in the newly-updated F-Pace SVR, but when an engine sounds as mighty as this you don’t miss an extra 30bhp or so. It’s plenty quick enough.

Plus, the Defender V8 isn’t actually one of JLR’s SVO products, so despite the extra suspension tuning it isn’t supposed to be stiff and hard riding. There’s plenty of heave and pitch under heavy acceleration and braking – all of which is part of the character that defines it.

Love it. If you can park the feeling that everyone else on the road – especially those in now miniscule-looking hatchbacks – thinks you’re a bit of a pillock, then it’s a fantastic thing to pilot.

We’ve only had the chance to drive a 110 on-road so far, and although it’s a giant thing (think just under two metres wide and just under 2.5 tonnes) with the option of seating five, six or seven, it really can shift. Dynamic mode – which will remain exclusive to the V8 –  sharpens the throttle response, weights up the steering and livens up what Land Rover calls the ‘Continuously Variable Damping’. The result isn’t exactly elegant and there’s still plenty of roll, but it turns in well, copes with quick cornering and then blunderbusses its way across any following straight section, punching holes through the air like the local hooligan looking for a scrap in the early hours of a Sunday morning, whilst the bonnet rises up and makes a break for the sky.

It’s clearly not as competent as something like a Porsche Cayenne Turbo/GTS, a Lamborghini Urus or an Aston Martin DBX. In fact, it’s far closer to the Mercedes-AMG G63, but that’s a fairly major complement given how much we like the latest generation G.

The Defender’s 20-inch brake discs help pull things to a stop remarkably well too, and if you want things to settle down you can happily stick it in comfort mode, tell the engine to pipe down for a while and ride on that wave of torque. It’ll manage the school run with no dramas.

It’s still a Defender, so does it work off-road too?

That’s exactly the reason why the Defender V8 is more like the G63 than any of the other modern-day super-SUVs – it actually works off-road. More than that – it’s hugely impressive off-road.

Anything in this department that you’d find on the other Defenders, you get on the V8. That means a huge amount of different terrain response modes, locking diffs, low-range gear ratios, adjustable ride height, impressive approach and departure angles and a 900mm wading depth. And don’t worry if that all sounds remarkably complicated – if you just need to get out of a tricky situation there’s an Auto mode in the terrain response system that tells the car to figure out which mode and diff settings it needs for each slight change in terrain or circumstance. 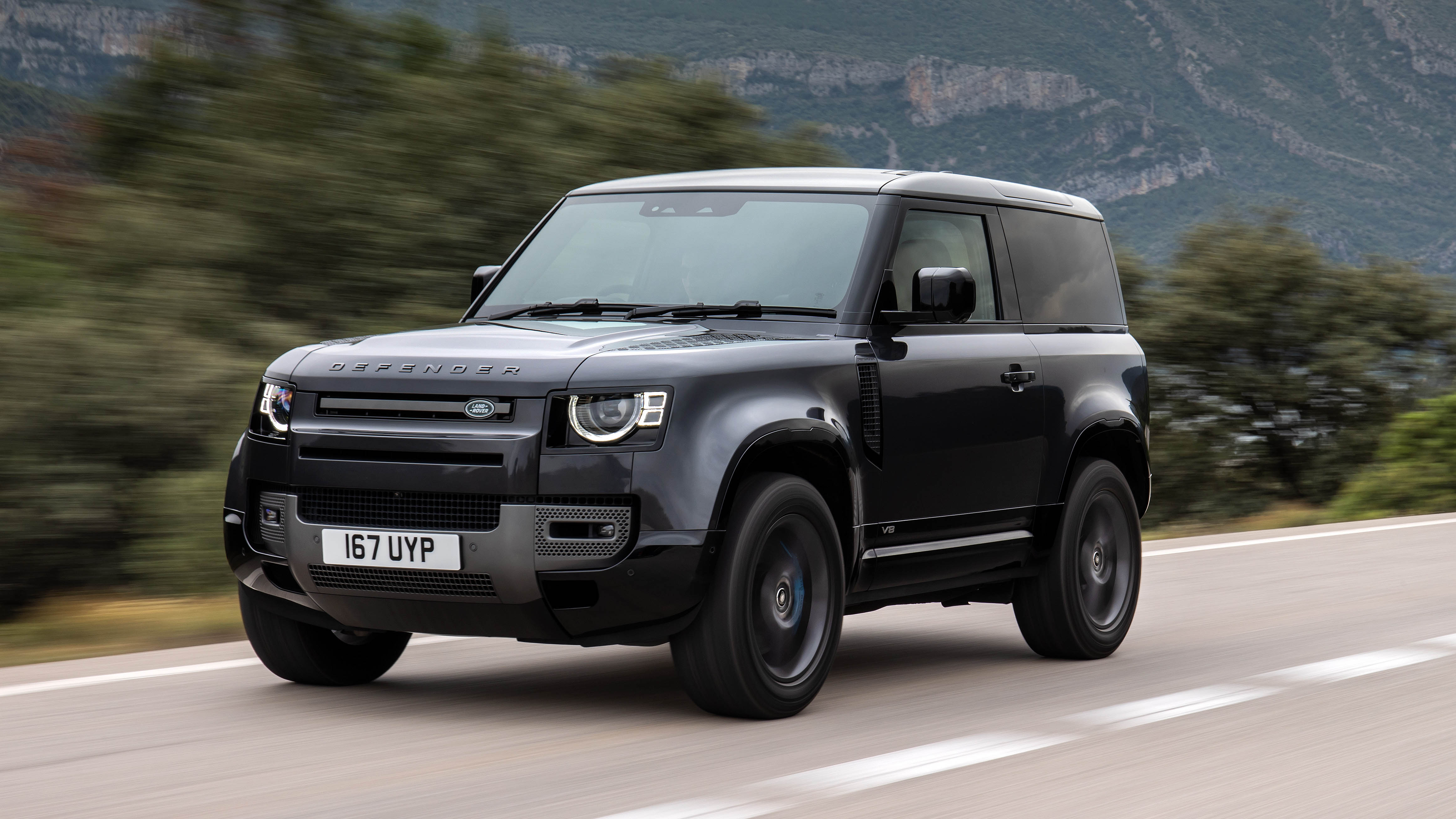 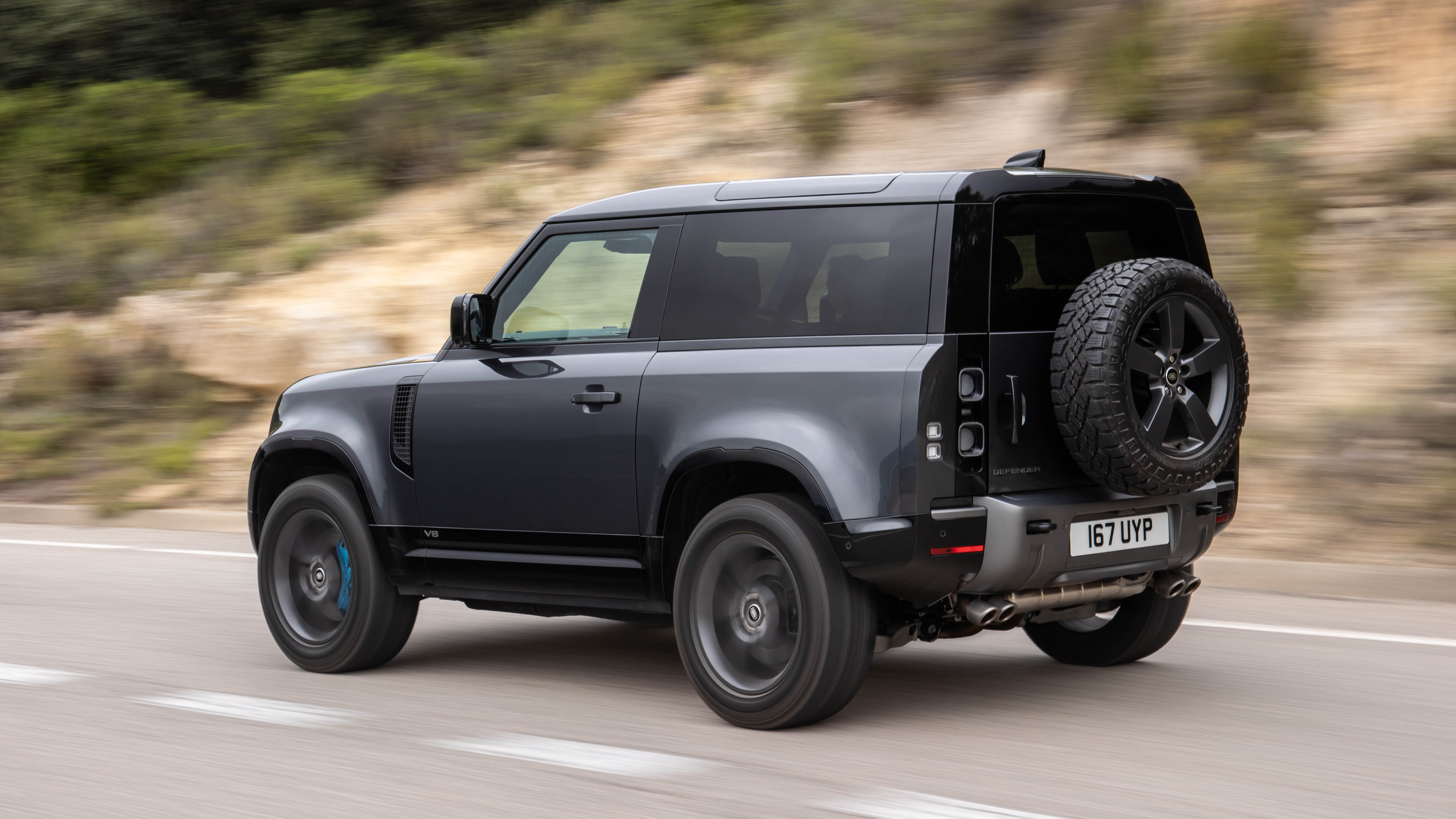 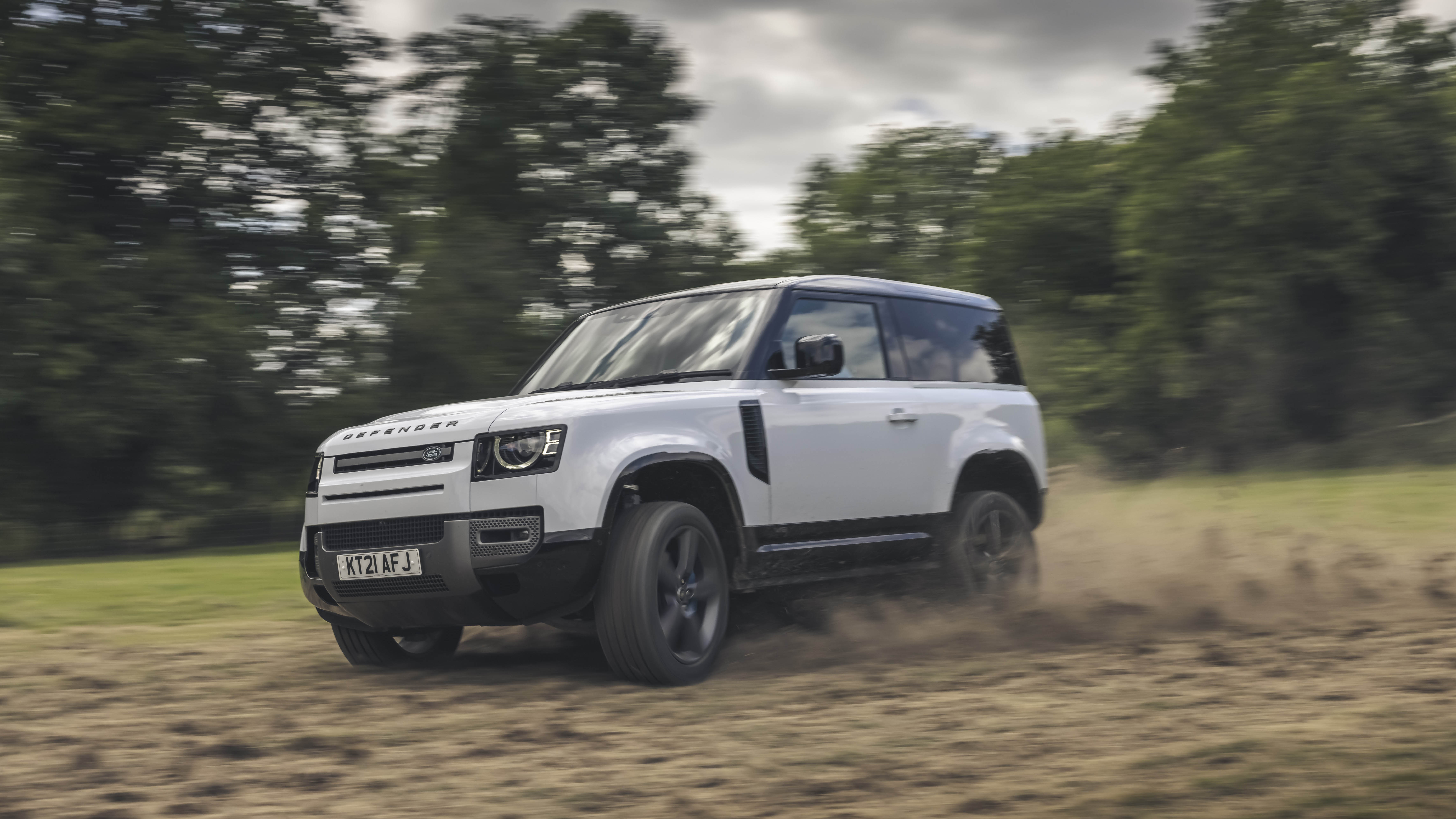 The V8’s interior is mostly the same as you’ll find in any other Defender. The only real differences are seats trimmed in black leather with extra suede, a full Alcantara steering wheel and V8 written on the illuminated treadplates – just in case anyone needed reminding you’d bought the LOUD one. Flick the gearbox into sport or manual mode and you’ll get a small digital rev counter in the head-up display, too.

Hah. Good one. JLR may be aiming for carbon neutrality by 2039, but the Defender V8 isn’t really a step on that particular path. There is a rather ironic ‘Eco Data’ section within the Pivi Pro-equipped central touchscreen (which can now be had as a curved glass 11.4-inch unit rather than the standard 10-inch screen) that displays your mpg and a driving score though.

Dare to look and you’ll likely see mid-teens in terms of miles per gallon, with Land Rover quoting ‘up to 19.5mpg’ and CO2 emissions from 327g/km. Ouch.

I want one. How much is it?

Of course you do. Rumour has it that pre-orders are exceptionally strong for V8-equipped Defenders, and it arrives just after the smaller engined versions pass 100,000 total sales.

For a 90 V8 prices start at £98,575 OTR, whilst the more practical 110 is £101,220 before you hit the extensive options list. Land Rover is also offering a top-level ‘Carpathian Edition’ though, which pairs Carpathian Grey paint with a Narvik Black contrast roof, bonnet and rear door.

Is there anything else I need to know?

Well, as you might have noticed, you can spot a V8 from the quad-exit exhaust, the 22-inch alloy wheels and those piercingly bright Xenon Blue brake calipers. You do only get a choice of three colours though – the aforementioned Carpathian Grey, as well as Yulong White or Santorini Black.