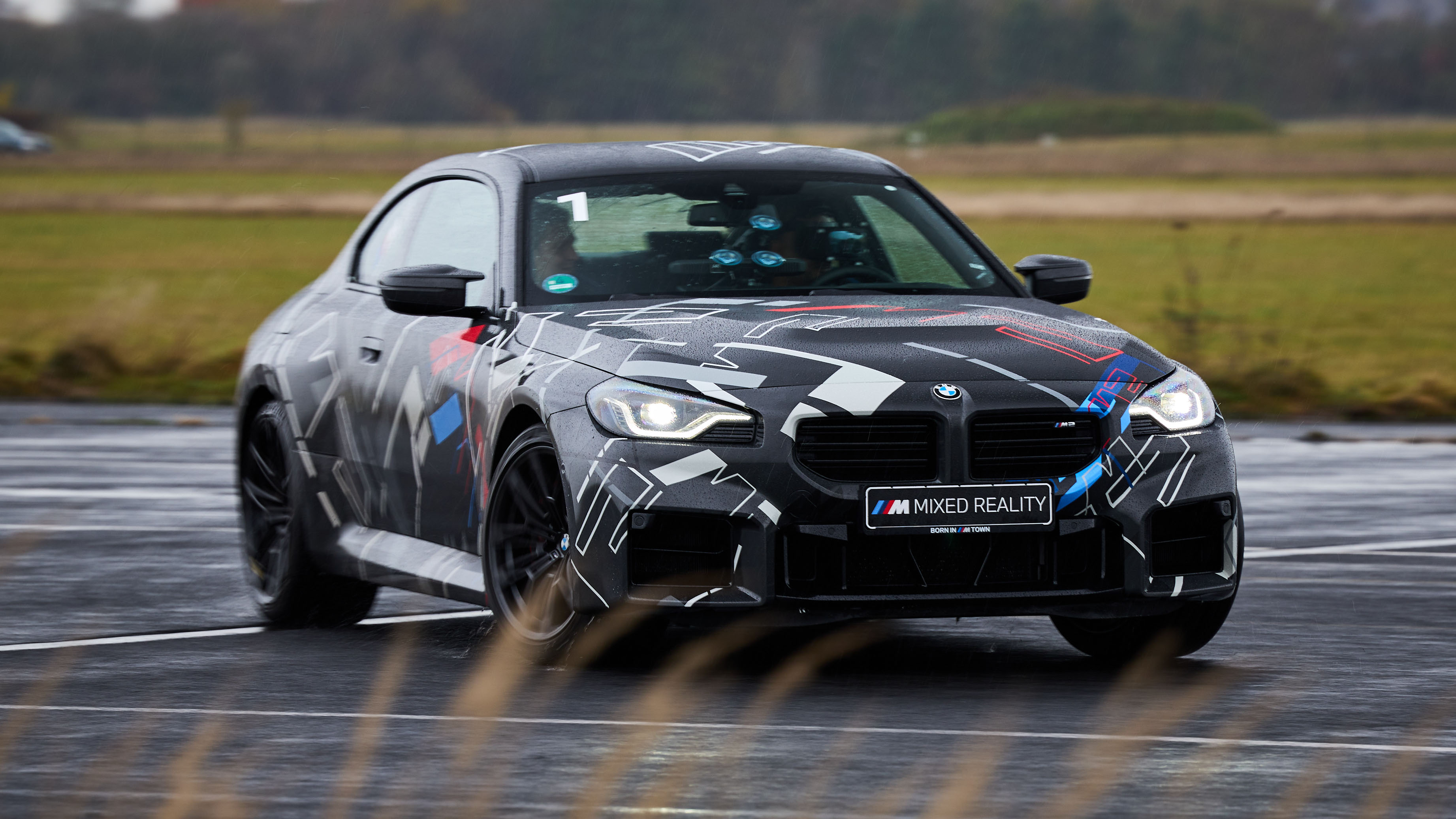 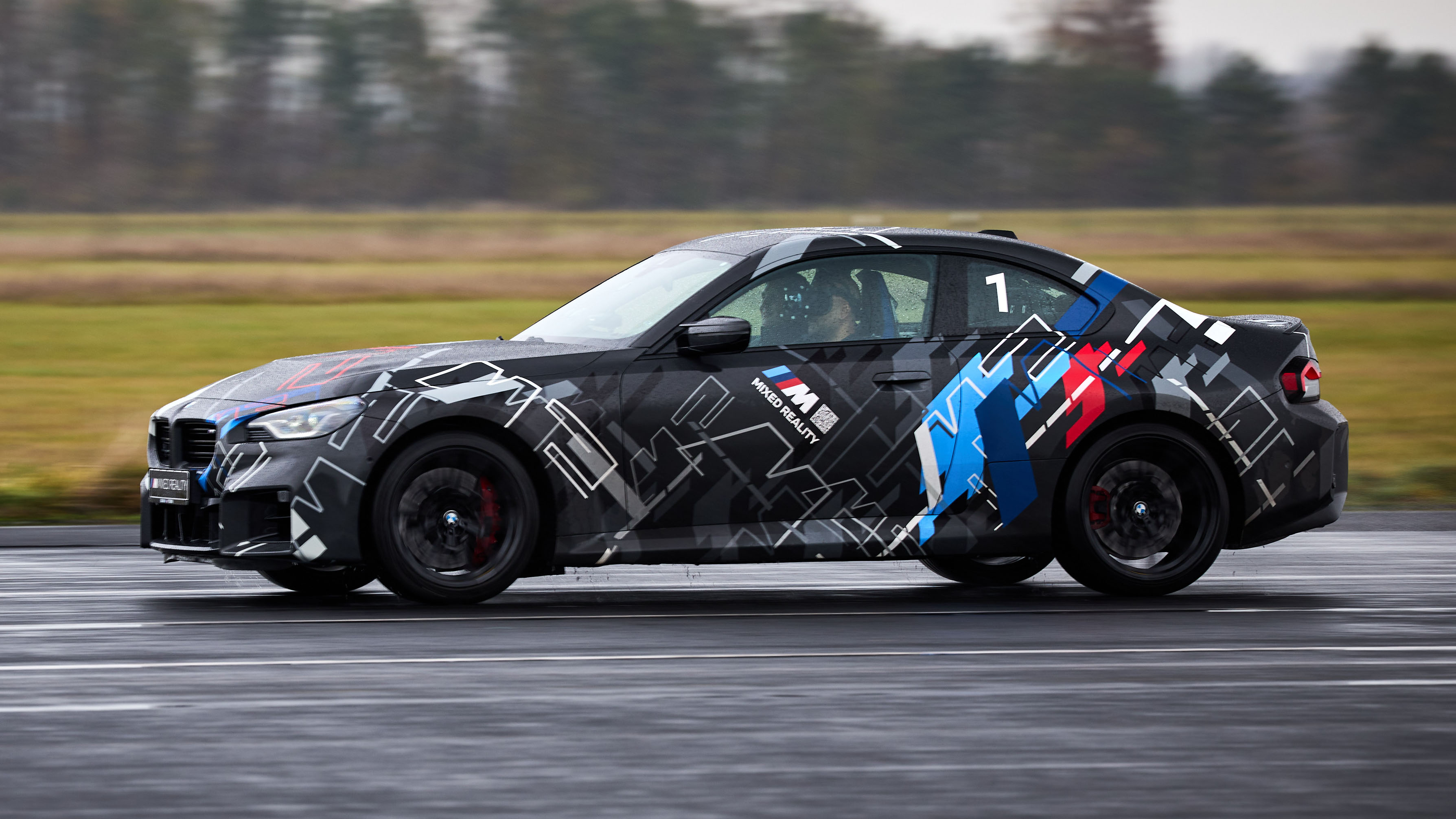 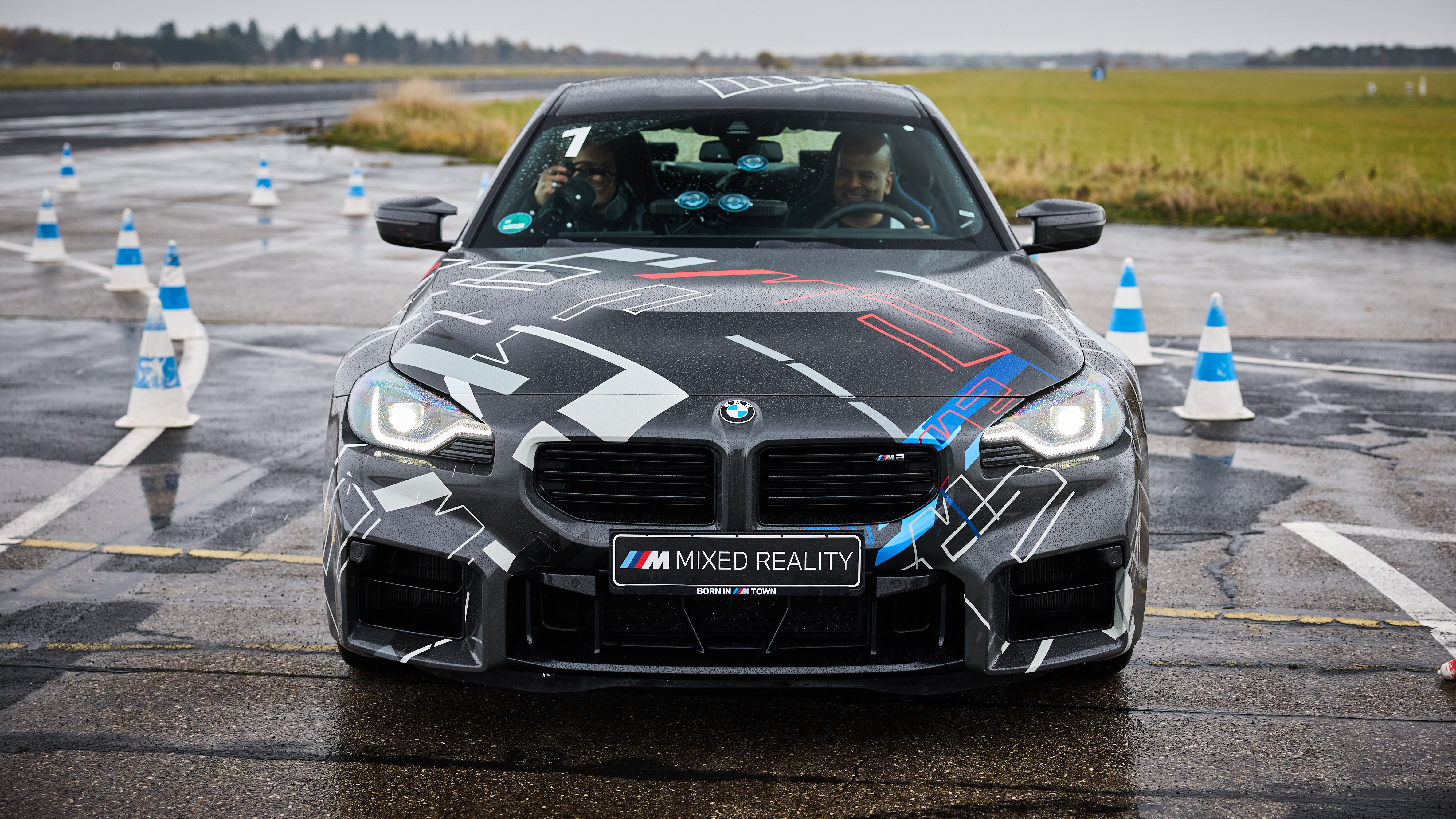 Is that headset to prevent you from looking at the new BMW M2’s face?

Indeed, on the surface there appears to be a plethora of easy targets to aim for with BMW’s ‘Mixed Reality’ idea, so perhaps some context would be constructive. At its heart, it is a very simple concept: there is an actual, real-life BMW M2 – revealed earlier this year – featuring a twin-turbocharged 3.0-litre straight-six, 454bhp and rear-wheel-drive.

‘M Town’ has been programmed to fit within the confines of a real-life area – for example, at a car park located, ooh, let’s say at the BMW Driving Experience in Munich.

Your mission, should you be brave enough to choose it, is to drive the real BMW M2 while wearing a headset that tells your brain you are inside a videogame.

I’ve got a lot to say about this idea.

So do we. A headset usually reserved for very expensive home gaming setups being used in something with very real responses? A virtual world named ‘M Town’ for goodness’ sake? The fact that you’re piloting a very fast, very powerful machine essentially blindfolded around a few cones set up in a damp, grey German car park?

TopGear.com was probably not alone in wondering why go to all the trouble of developing a really powerful coupe and then shielding what corporate types like to call ‘end users’ away from the reality of driving it.

A pertinent question, and one we put to BMW M’s Alex Kuttner, the engineer responsible for this seemingly conflicted idea. “Over the last few years we've had comments from our fans who said ‘we want to go to M Town, we want to be there,” he tells TopGear.com.

“So I had the idea that we bring you to M Town but we take our cars too.” 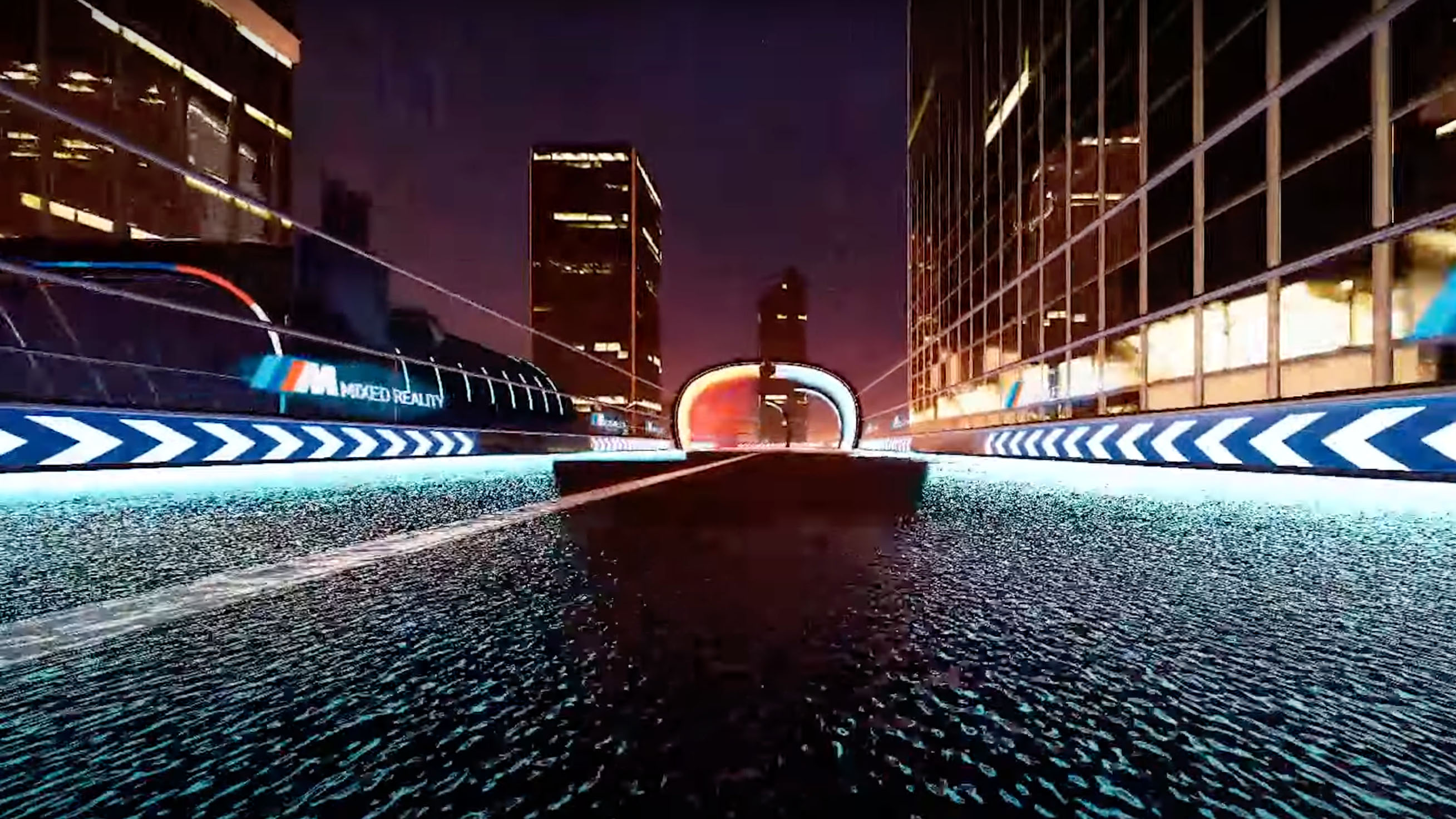 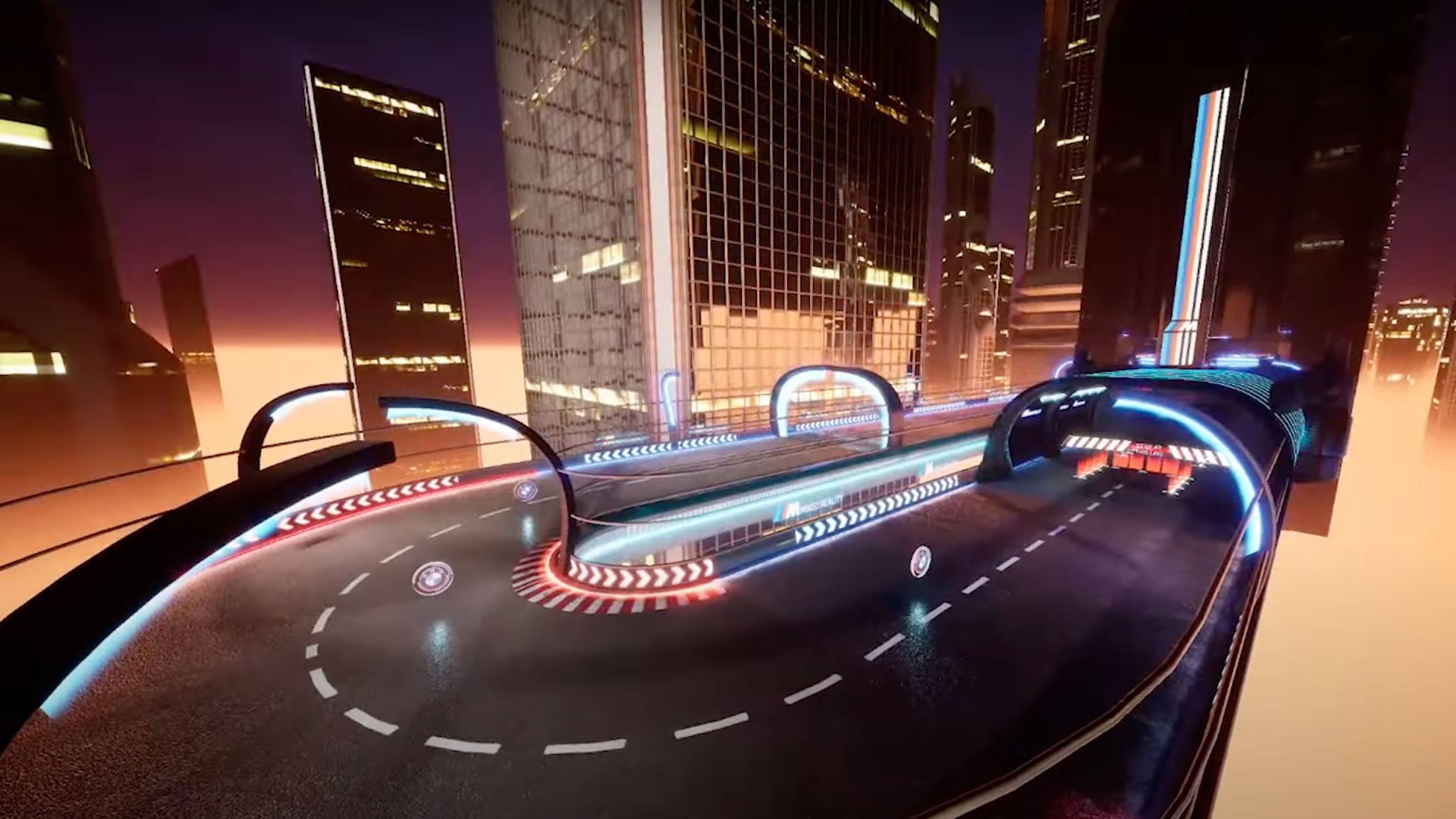 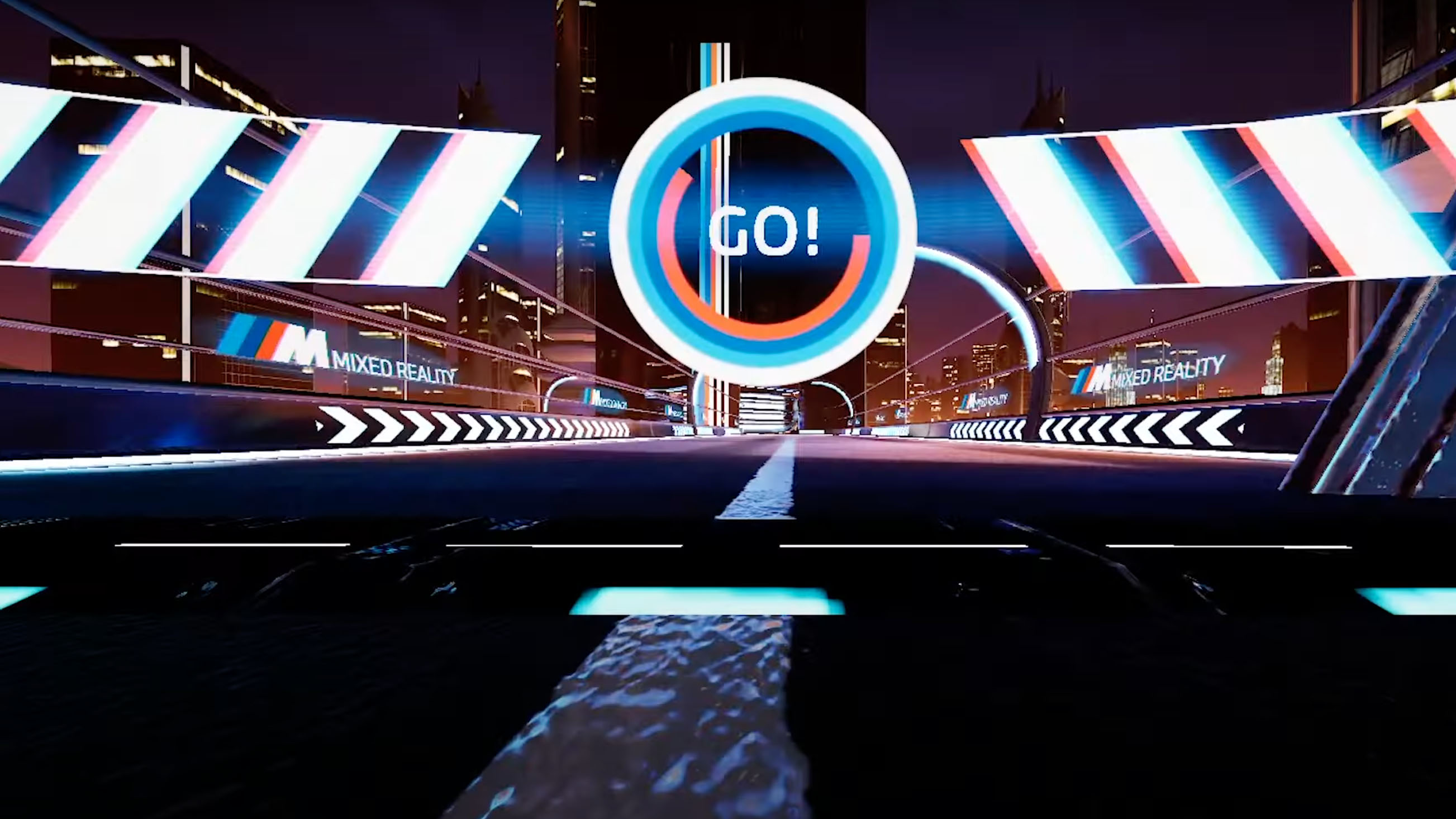 Does that… does that mean the virtual world… reflects a BMW M owner’s dream?

Again, we asked Alex how he created this digital utopia. “I’m not really sure!” he says with a chuckle. “It was the first picture I had in my mind when I thought about a futuristic city.”

With scepticism engaged to ‘Full’, we ventured tentatively into ‘M Town’ and sincerely hoped a) we’d never have to use that term again, and b) we wouldn’t spear off into hitherto unseen corners of the real world we’d be driving in.

So brief it barely qualifies as a drive, especially because we were being sent very confusing signals in our brains, so you'll have to wait a bit for the full TG.com review. But it was enough to experience the virtual reality concept.

Really. It took about a minute in the virtual world to see just what a fantastic concept this Mixed Reality really is. Videogames can be brilliant, and coders and developers spend hundreds of hours fine-tuning simulation rigs; the feel and response times, agonising over how realistic they can make the game.

This jumps clear of those hurdles in one fell swoop, because it’s a real car, spearing through a magical world of tokens and high-rise virtual buildings and rendered corners. Liken it to a turbocharged, 454bhp controller.

Like the best VR, there’s no lag in response time, but unlike VR, the real life M2 feeds accurate information through your fingertips, through the seat, through the engine note.

“You can train with it, you can race with it,” Alex tells us. But most importantly, you can just… play.

Did you feel scared that you were, as you say, about to spear off into an unseen corner of the car park?

Not once. Everything is telegraphed so naturally and it feels so fluid and well rendered, you just want to keep lapping the small section we were privy to.

Which is of course the only problem. Our time was very limited, but after just three short laps and a grand total of less than three minutes of actual drive time, we can declare: this is the best racing game ever created.