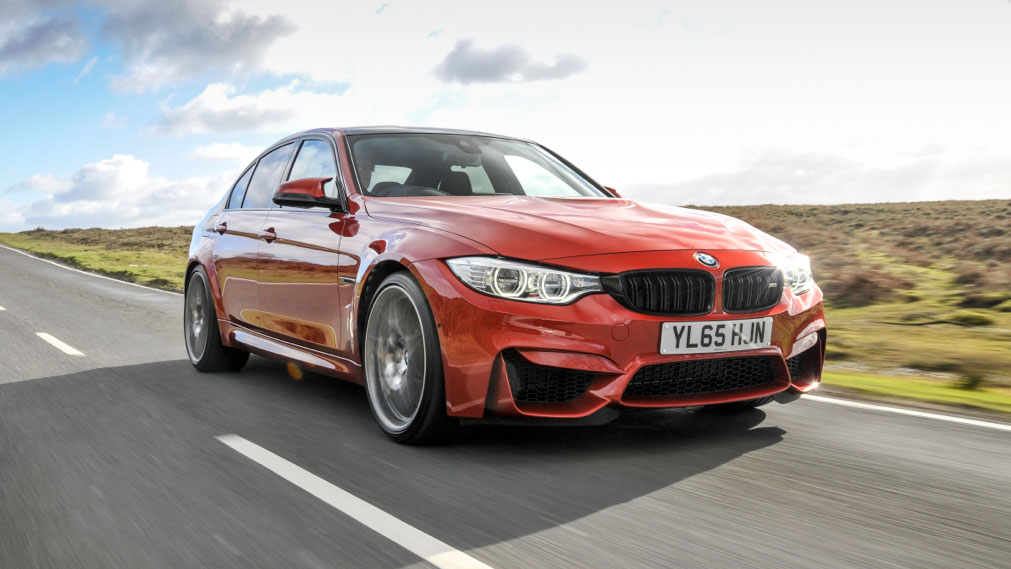 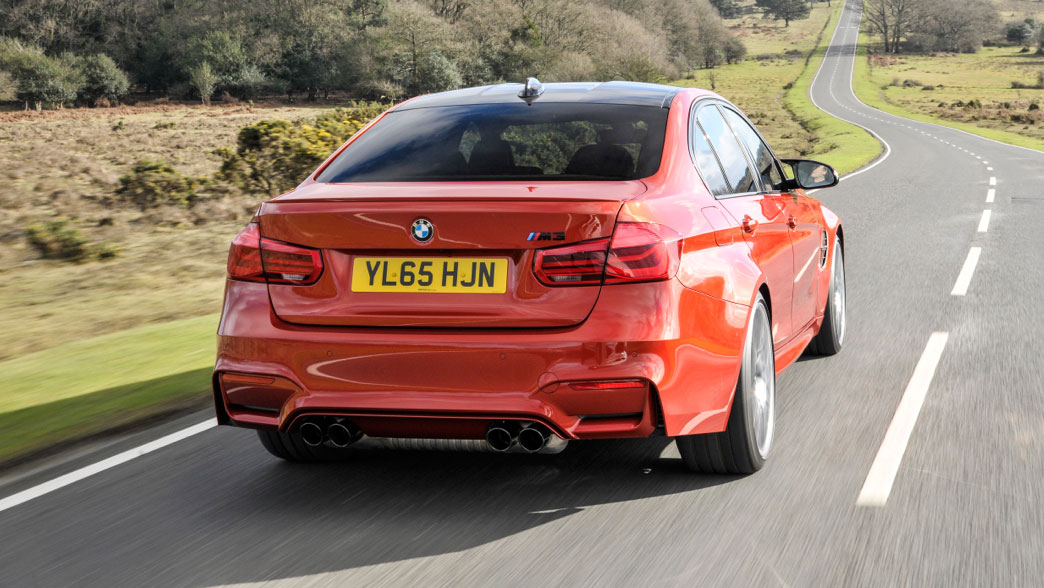 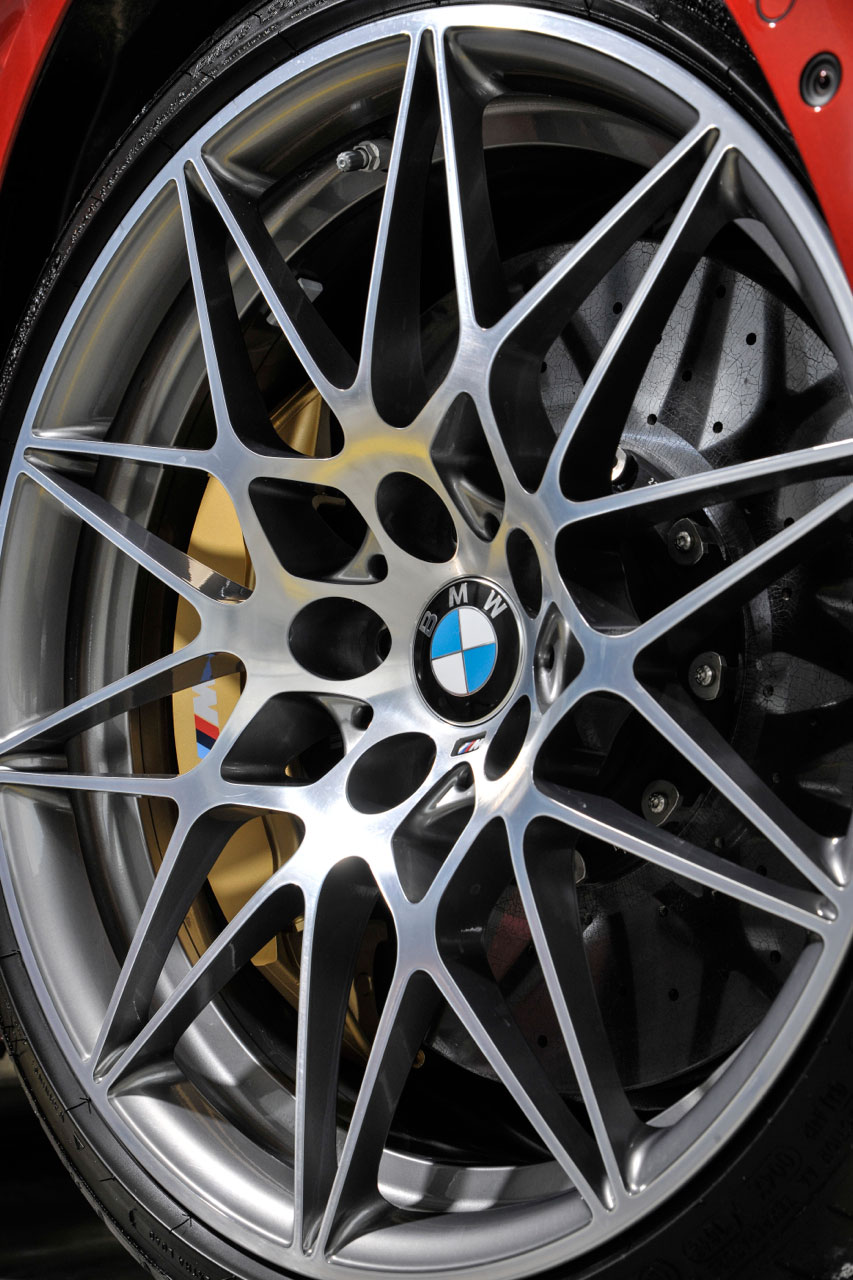 Clearly a BMW M3, less clearly a BMW M3 with the new Competition Pack fitted. But you don’t have to look too closely to spot the design tweaks: the exhaust tips are black, so are the grille, window surround, mirror caps and side gills, and even the badge. I like that last one – it looks stealthy and cool.

But this isn’t just a cosmetic makeover, is it?

Absolutely not. Although I am going to point out the new ‘lightweight’ seats inside. I’ve used inverted commas, because as far as I can make out, it’s just the same seats, but with cutouts where your kidneys are. Looks cool, but gives your kids far too much temptation to jab/tickle/poke. I do like the seatbelts with the M stripes woven in to them. Subtle and tasty.

Fine, now what about power?

Well, there is more. The twin turbo 3.0-litre straight six has been uprated from 425bhp to 444bhp and as a result the 0-60mph time has fallen by 0.1secs to four seconds exactly. Torque remains at 405lb ft, which is plenty.

The engine crank case cover has had to be uprated to cope, but nothing else has, and in terms of character and delivery not much has changed. The engine note is a fraction sharper and more guttural, but I couldn’t detect any difference to speak of in the response, pick-up or outright acceleration.

It’s still a very, very effective engine. Overtaking ability is outrageous, mid-range acceleration is colossal, there’s just so much shove. However, the criticisms we have of the standard car, the slightly artificial noise and lack of top end sparkle and fizz, remain. And the gearbox still lurches with every full blooded upshift.

There’s still not enough reason to hang on for high revs, when all the performance you’ll ever need/be able to use is available before 5,500rpm. Maybe the M4 GTS, when it arrives, will be different.

But this isn’t that car, the engine isn’t that different, so why bother?

Because of the changes made to the suspension, differential and stability systems. Now, the standard M3/M4 (the pack is available on both, plus the cabrio) is a slightly divisive car. I love it, but others in the office don’t. They find it a bit wild, just a touch too lairy, rear wheel traction notable for its absence.

And they’re right, it is; I just happen to like that. But I prefer the way this one drives, and I think everyone else will too. Even I will admit that the rear axle on my long-term M3 is a little clumsy, seeming to push sudden torque to the outside loaded wheel as soon as you brush the throttle coming out of a corner, causing the rear end to skip an inch or two laterally, and meaning that you can’t really get on the power until the car is absolutely straight. By which time the pesky 4wd estate or hot hatch or whatever has pulled out a crucial few yards advantage. That is a bit frustrating.

But not in the Competition Pack?

No. The rear differential is transformed. It’s much more subtle in its actions, more precise and much more confidence inspiring. Now, when you open the taps on the way out of a corner, it feels like both wheels are driving, trying to get traction and drive forwards, not trying a spot of sideways showboating. It’s still fun, and will slide and smoke as much as you want if you disengage the DSC, you loon, but for everyday driving, even on quick, tight, fun roads, it’s not only more effective, but more rewarding, with a nice wide neutral point that makes the chassis feel a lot more balanced.

Anything changed at the front?

The springs, dampers and anti-roll bars are all new both front and rear, and the driving modes on the adaptive suspension have therefore been reconfigured. Overall it’s a little firmer, but not aggressively so – in fact it’s more that roll has been reduced a little – the ride actually felt less jerky and stilted than normal in both Sport and Sport Plus modes.

To return to the front axle, it just seems a tad sharper and more eager to turn in, but there’s still not a whole bunch of natural steering feel – you rely on the tyres to keep you informed about grip levels.

What about the brakes?

This one, unlike my own car, featured carbon ceramic brakes. If you drive your car hard in the Alps or do track days, have them. Mine start to fade, smell and suffer soon, these ones don’t – the pedal eventually gets a little more travel, but the power and bite don’t suffer. At £6,250 they are an expensive option, mind you – twice the price of the whole Competition Pack.

So, acid test, would you have the Competition Pack?

Absolutely, every time. It’s only a £3,000 option on the M3 and M4, a mere £2,200 on the Convertible. Even if the changes only included the cosmetics, I think that looks good value. However, look at it from the other side and the question is why BMW isn’t changing the standard car, when it’s been criticised in some quarters for its (mis)behavior.

BMW expects take up of the Competition Pack to be around the 75 per cent mark. I’m not sure why you wouldn’t have it. The Competition Pack takes the slack out of standard car, and the waywardness, too. It’s purer and more focused, usefully sharper and no less refined to live with.

I reckon it’s borderline transformative, the car the M3 always should have been.