£21,500 when new
Sam Philip
Skip 4 photos in the image carousel and continue reading 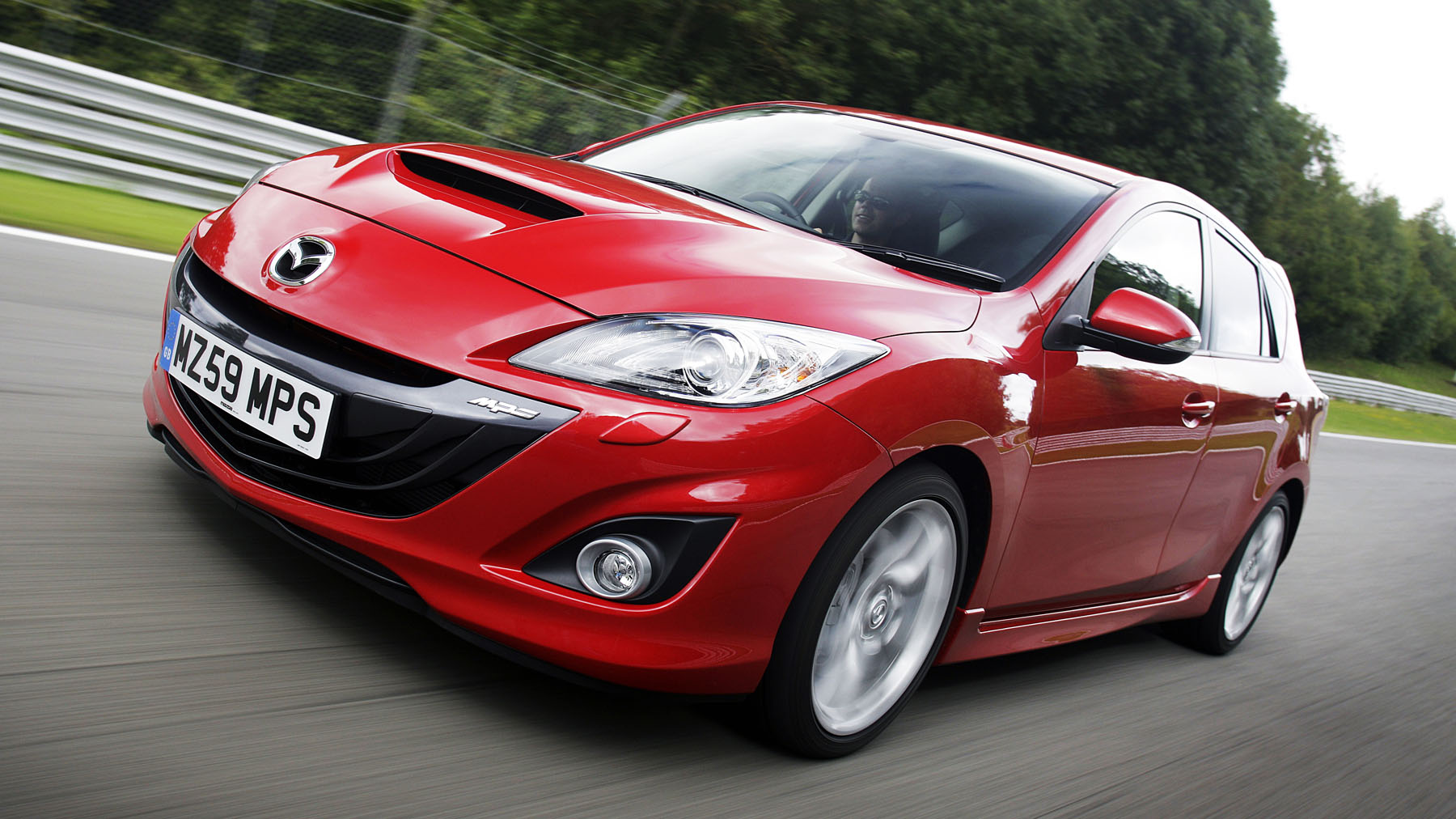 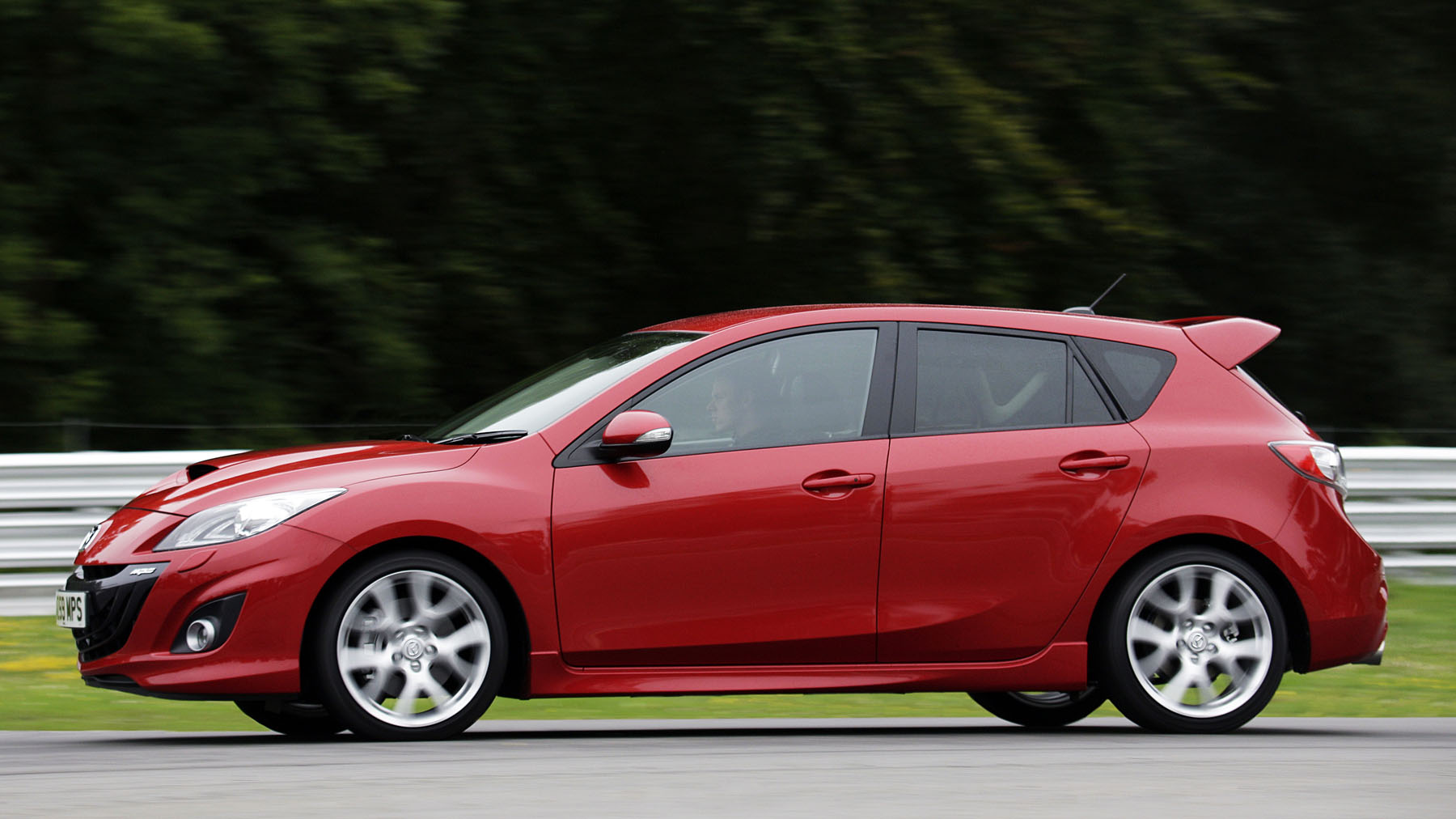 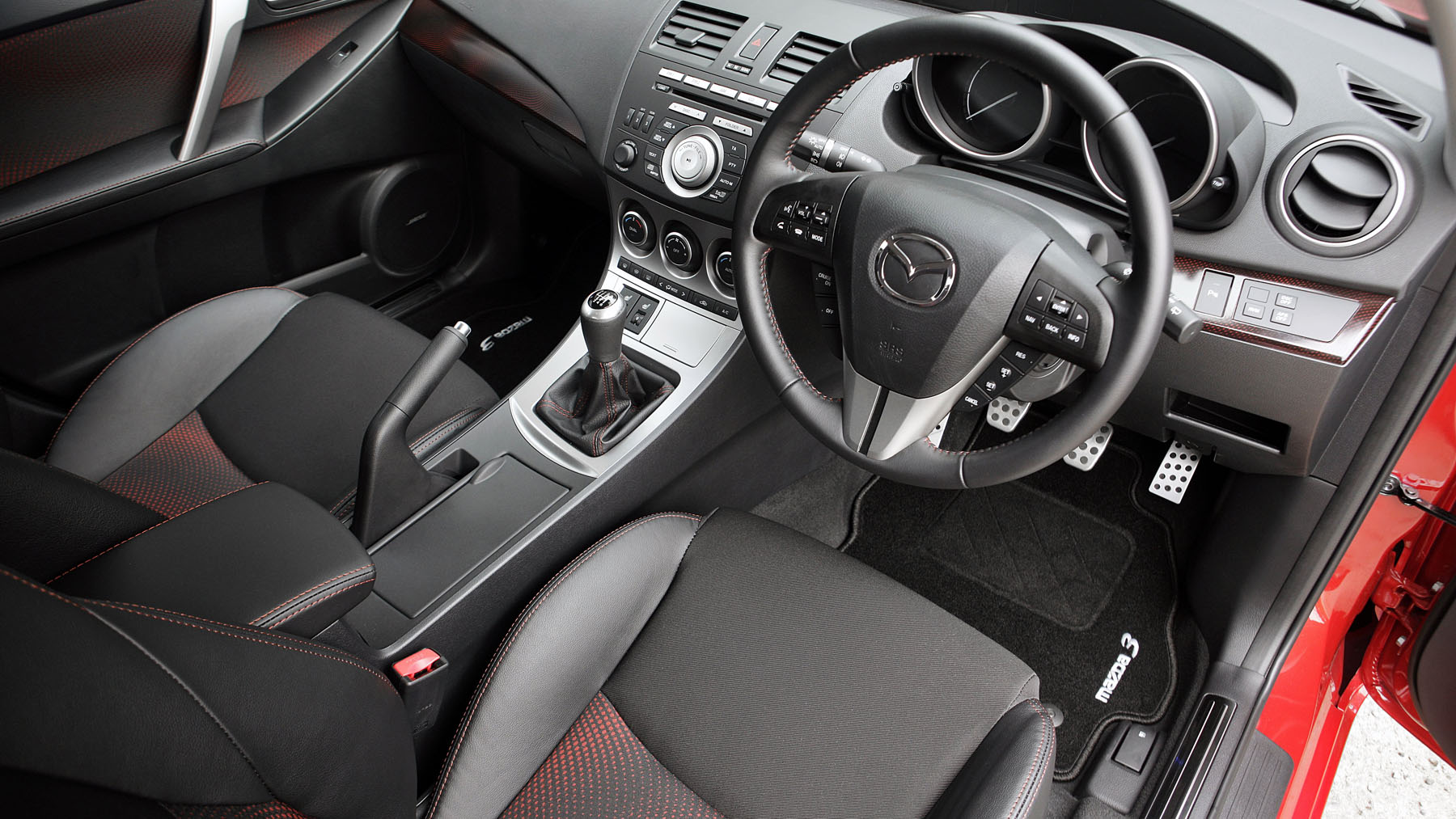 The original Mazda 3 MPS managed the intriguing feat of being very interesting on paper – a 256bhp hot hatch, the most powerful production front-drive car in the world – yet dull both to look at and, in comparison to its rivals, drive.

It was launched in a more innocent age, way back in 2007, when people still wore top hats and considered packing a front-drive hatch with over 250bhp to be way beyond the very limits of physics, like sending a man to the centre of the sun or getting Gordon Brown to smile without looking like he’s just killed a man.

But times have changed. The Focus RS has proved that, armed with sufficiently anatomical suspension, a front-drive hatch can (just about) tame 300bhp, and that we actually rather like cars peppered with massive holes and big lumps of angular metal.

Wisely, perhaps, Mazda has decided not to chase the power crown with this, the second-gen 3 MPS, and has instead concentrated on making its flagship hot hatch a bit more engaging. Engaging at all, in fact.

So the powertrain remains largely unchanged, the turbocharged 2.3-litre four-pot still developing 256bhp but gently reworked for a little more mid-range torque and, importantly, lower emissions and improved economy – CO2 output is down by 5g/km, and the engine now meets Euro 5 regulations. Leaving the power figure unchanged isn’t a problem: even now, 256bhp is right up there with the new RenaultSport Megane, Seat Leon Cupra and Vauxhall Astra VXR. 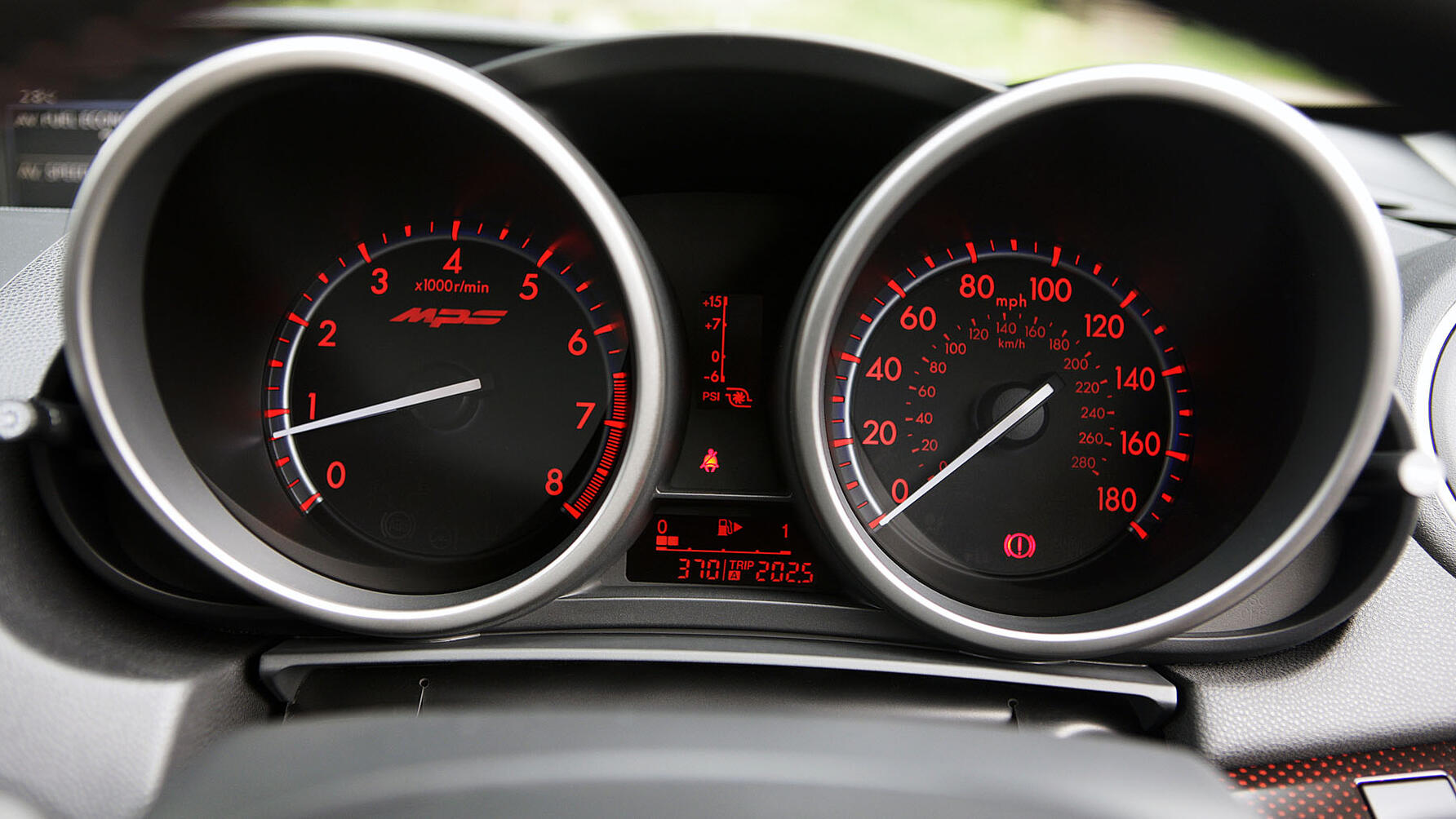 The big work here has gone into making the relationship between self, significant turbo power and road a little more engaging than its predecessor, and adding some much-needed visual, er, something.

Say hello, then, to the full hot-hatch smorgasbord of flared arches, bootlid spoiler, fat new front end with gurning mouth and, most strikingly, a whacking great hole in the bonnet which points to a long-term cocaine habit and poses significant danger to low-flying birds. If you’re thinking the whole package looks a little familiar, we’ll give you a clue: Subaru Impreza STI. Give the MPS gold wheels and a branded geek for a driver and it’d pass as a decent stunt double. Still, better to resemble a Japanese rally legend than a Malaysian rental car.

Under the newly-steroidal metal, Mazda has heavily revised the MPS’s bodyshell, improving torsional stiffness by 41 per cent. The chassis has been beefed up too, with much thicker anti-roll bars and stiffer shocks and springs. Weight is down by 50-odd kilos. All good stuff, but how is it out on the road?

Fast. Really, significantly fast. The new MPS will crack 62mph in just over six seconds, barely a tenth slower than the Focus RS. Though not quite as ballistic when it gets on turbo as the Ford, it’s still an indecently rapid thing, noticeably quicker than TG’s Slightly Sensible Hot Hatch of Choice, the Golf GTI. Find a straight piece of motorway, bury the throttle in third and feel the horizon hoover you in as the MPS gets on boost at around 2,500rpm and keeps pulling hard to 6,000rpm – it’s clear you’re in a serious bit of machinery.

Mazda has improved sound deadening in this new 3, which is great for motorway cruising but not so good for maintaining a squeaky-clean licence: it’s the sort of car where you can be happily pottering at 60-something in the inside lane, absentmindedly squeeze the throttle to pass a caravan and suddenly find you’re hauling triple figures and have mysteriously acquired a full police escort, a lengthy jail term and a new soap-wielding best friend called Chopper.

But, assuming you manage to hold onto your licence long enough, you’ll eventually encounter a corner, and that’s where things get interesting.

If you’re sensing the words ‘torque’ and ‘steer’ washing like a big inevitable tsunami in the direction of this paragraph, yes, you’re right. 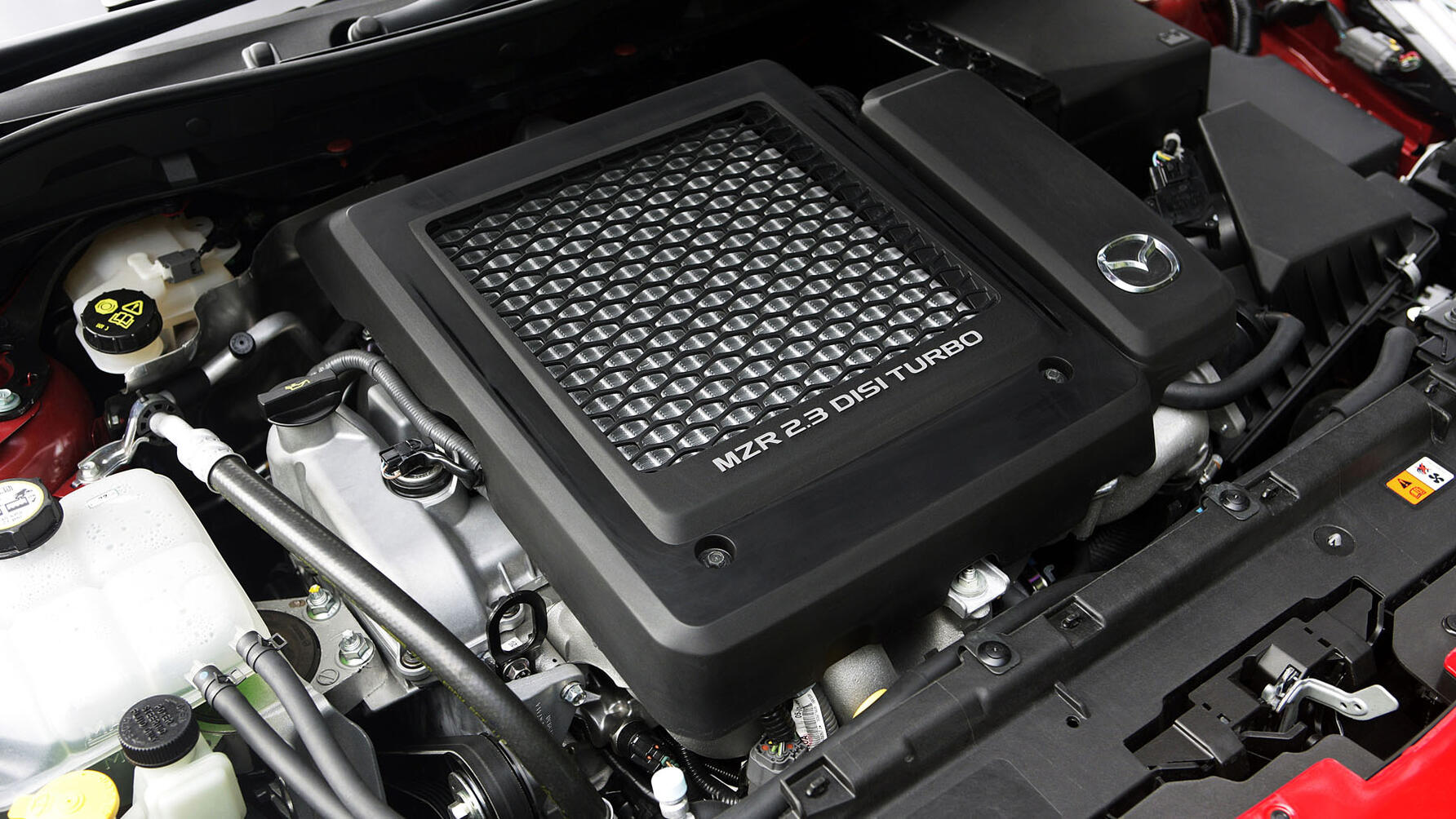 But not quite as much as you might expect: Mazda has fitted a torque limiter that prevents maximum twist reaching the wheels in first and second gear, or at extreme steering angles, and it does a fair – if artificial – job of reigning in the inevitable wheel-tugging. It’s still more noticeable than in the Golf GTI or Leon Cupra, but hardly worse than the Focus RS or Mini JCW.

But while torque steer is just about controlled, there’s a general fidgetiness to the MPS’s steering that makes it disarmingly tricky to thread together a series of corners. Though the rack is quick, the wheel seems determined to self-centre, making you fight against it to hold your line into a bend. Where the GTI or the Focus ST breathe and skim through corners, the MPS battles against them, nibbling after cambers and clawing onto changes in tarmac.

This impression of nervousness is magnified by the ride, which is tougher than a Kevlar-clad rhino. Chassis stiffness is great news when you’re on a smoother-than-single-malt racetrack, but hit a knobbly stretch of country lane and the MPS is so hard that it bounces across the bumps, giving the front end a distinctly tenuous relationship with bad roads.

Avoid the potholes, and there’s a pleasing mechanicity to the MPS.

The new front differential is a proper limited-slip affair – no prissy electronic interpretations here – and you can clearly feel it tucking the nose of the car into tight corners. So long as you don’t encounter a mid-bend divot, there’s masses of grip, and far more feedback through the wheel and chassis than on the old MPS.

So, despite its flaws, the new MPS isn’t without its charms. Think of it as a rival to the hardcore Megane R26.R or Honda Civic Type R, a car that trades cruisability for wiry reactions and tight-apex pointiness, and it makes some sense. But the real kicker, we fear, will be the MPS’s price tag. A single high-spec version will reach the UK, a throw-the-whole-options-list-at-it special costing £21,500. You get a lot of kit (satnav, leather, 10-speaker stereo, parking sensors), but none of it is hugely convincing. The satnav has a tiny screen and can only be controlled by a tiny set of buttons on the steering wheel, while the half-leather buckets could use a little more lateral support. Though there are some neat bits of design – the wraparound dash, for one – the overall finish is nowhere near VW standards.

A proper base-spec MPS, a car that undercuts the Focus ST, Golf GTI, Renault Megane et al while offering more pace and power would be a tempting prospect for the committed hatchist. But at this price it’s tough to see why you wouldn’t forgo a bit of kit and opt for the Golf, or save up for a few more months for that proper hot-hatch supercar, the Focus RS.

Unlike the last-gen 3 MPS, the new version manages to be as interesting on the road as it is on paper – in a good way, for the most part. But in a market packed with glitteringly brilliant hot hatches, it’ll remain a niche choice. Tough crowd.