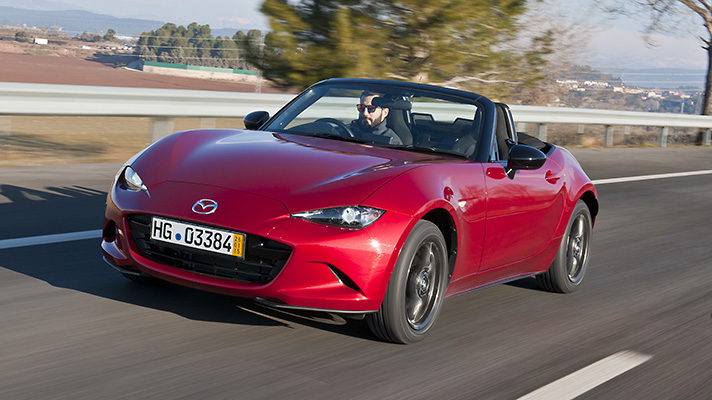 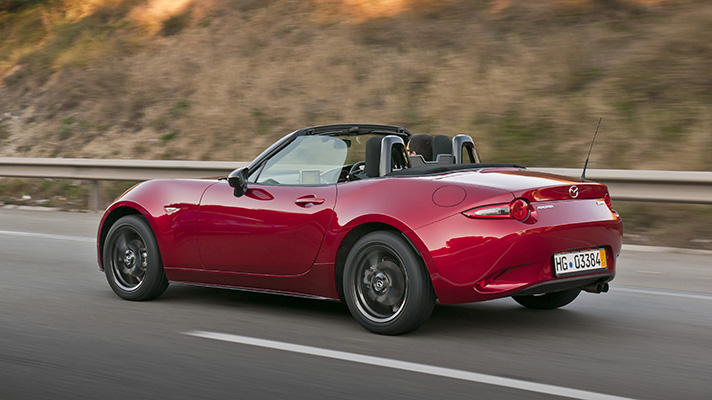 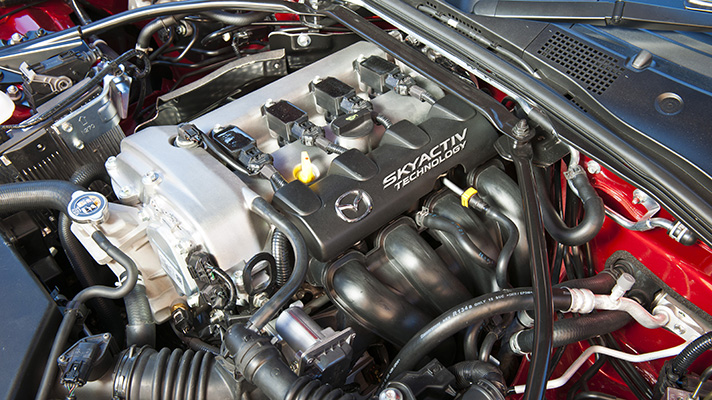 It's the all-new, fourth-generation Mazda MX-5, or Mazda MX-5 'Miata', if you're an American.

And by all-new, you mean ‘a bit different to the old one'?

No, all-new. Fresh from the ground up, and both lighter and smaller than the car it replaces. The MX-5 has lost 10 per cent of its body weight, over 100kg, and is now even shorter than the 1989 original. That's virtually unheard of.

It looks dinky in the flesh, but has real presence, and yet there's more cabin space. The MX-5 is a very, very clever piece of packaging, as you'll deduce if you open the bonnet and see that the whole of the engine sits behind the front axle line. That's good for weight distribution, and the only penalty is a lump in the footwell underneath your calf, where the gearbox is.

Moreover, the engine is mounted lower in the chassis, which means the bonnet is lower. Thanks to that, the driver's hip point has been dropped, too. So you sit nice and snug in it.

Doesn't it just? In fact, with its scowling eyes there's a newfound edge of aggression to the fourth-gen MX-5. Lightweight aggression, though. A bit of cheekiness. And the back end is very nicely sculpted indeed, even better than the front. There's a harmony to the design of the fourth-generation car that's been absent since the first one.

I'll tell you what's most impressive. You know how you can see where corners have been cut in cheap cars? In the MX-5 you can't, despite the fact prices are likely to start around £19,000.

I got in it for the first time at night and was immediately struck by how strong the headlights were, how simple the infotainment was to operate, that the stereo had good clarity, that the seats were brilliantly shaped (if a bit narrow across the shoulders), and how well assembled everything was.

It was even remarkably refined, too, with just a rustle of wind noise from the tops of the doors where glass meets roof. For a car that weighs less than a tonne, that's fantastic.

The boot's deep, there's somewhere to put your phone, and even a pair of USB slots. There's a lovely body-colour door cap that, when you sit in the car, makes a line that runs past the A-pillar, straight out along the front wing. The MX-5 melds interior and exterior design better than any car I can think of.

No, a simple manual with a single latch in the centre. Unclip that, throw it back and press down to click it in place. Simple. It takes about three seconds without moving from the driver's seat, and if you've got a bit of shoulder strength it's just as quick to throw it back up.

There's a feeling with the Mazda, before you even drive it, that there's real integrity to the design and engineering. They've kept it simple, but made sure they've done the simple stuff well.

How is it to drive?

It's just fun. Not wide-eyed fun like a Porsche GT3, or sweaty-palm fun like a muscle car. Just light, easy, peppy fun. The MX-5 moves really, really well, asking nothing of you but darting merrily along like it's having the time of its life. It seems to whistle cheerily to itself all the time.

The chassis is a peach, and because there's little weight involved, the skinny 195-section tyres grip better than you'd believe. Keep the power on and some squealing will eventually occur, but the front end doesn't give up on you.

Doesn't it have electric power steering? Is that a good thing?

Rarely, and if I'm honest it's the same here. There's not much feel, it's a bit light for my taste, and personally I'd like the nose to have a little more bite on the way into corners. But the MX-5 has been designed for your aunt as well as you, and aside from that, and the slight chassis shimmer over cats' eyes, there are few dynamic complaints.

The damping is great: gone is the weird initial lurch you got from early Mk3s when you turned into a corner. Well, most of it. It's capable of acting the grown-up on motorways, and is a proper hoot in towns: city car small, and with a responsive, perky engine.

According to the trip computer, our car did 50.5mpg on a 100-mile trawl northwards out of Barcelona. On that evidence, you could well decide this little 1.5 litre four pot is all about efficiency. After all, with only 129bhp it's hardly a ripsnorter, is it?

But if I hadn't been told otherwise, I'd have sworn blind this was the 2.0-litre. It may not be turbocharged, but the base-engined MX-5 has enough low-down pick-up, and enough mid-range to run with it. True, it's not fast-fast - though Mazda hasn't released official performance stats, you're probably looking around eight seconds to 60mph - but it's got enough punch to make exiting corners fun.

And, although not as charismatic as a Honda VTEC, the little four-pot has a certain amount of character and a cheeky exhaust note. I also love that it gives you 500rpm more than you need when you fire it up, a chest-puffing little flare of revs.

The best. A cracker of a six-speed manual, and the pedals are nicely positioned for a spot of heel-and-toe if you like that sort of thing. Which you will do in this, as it comes so naturally.

A good egg, then?

Completely. The MX-5 is a simple car, but the simple stuff has been done really well. It hasn't been overcomplicated with active-this and electronic-that. It's a great little mover, one that enjoys being thrashed and always has a spring in its step.

With many European cars you get the sense that the marketing men identified a niche, and the engineers had to build something to fit it. The new MX-5, however, does what it's always done, but does it better, I think, than ever. It's got the design, engine and handling chops that have been absent as a package for a couple of generations.

So why have other car makers abandoned the small roadster market?

Who knows? Maybe they don't think they can better the MX-5, a car which, let's not forget, has now sold almost a million examples.

More likely it doesn't fit their marketing strategy, and it would be too expensive to develop a compact rear-drive chassis. Shame.

I'm just glad the MX-5 exists. The world deserves a small roadster as good as this. It brightens things up, and we all need a bit of that in our lives.