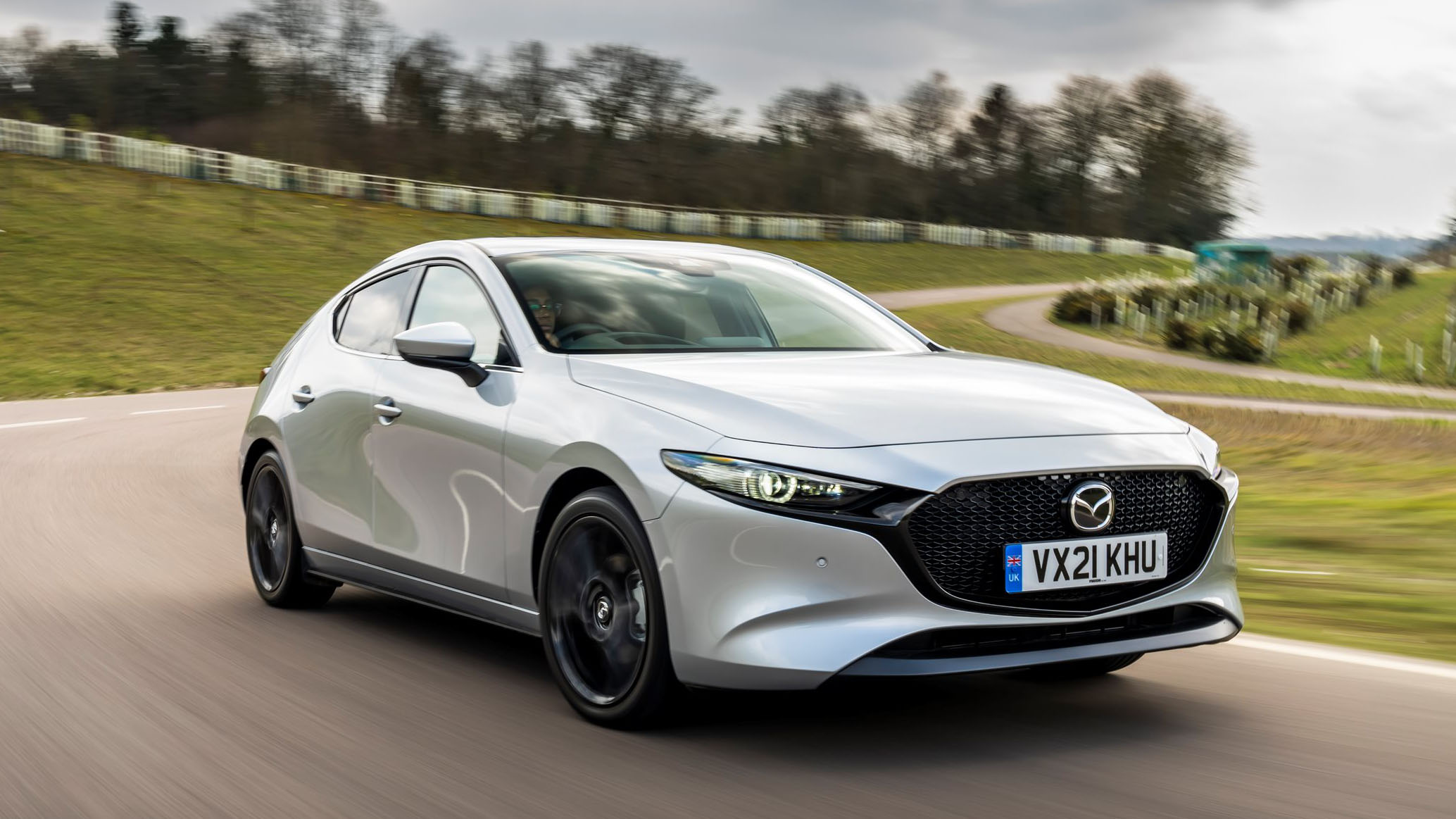 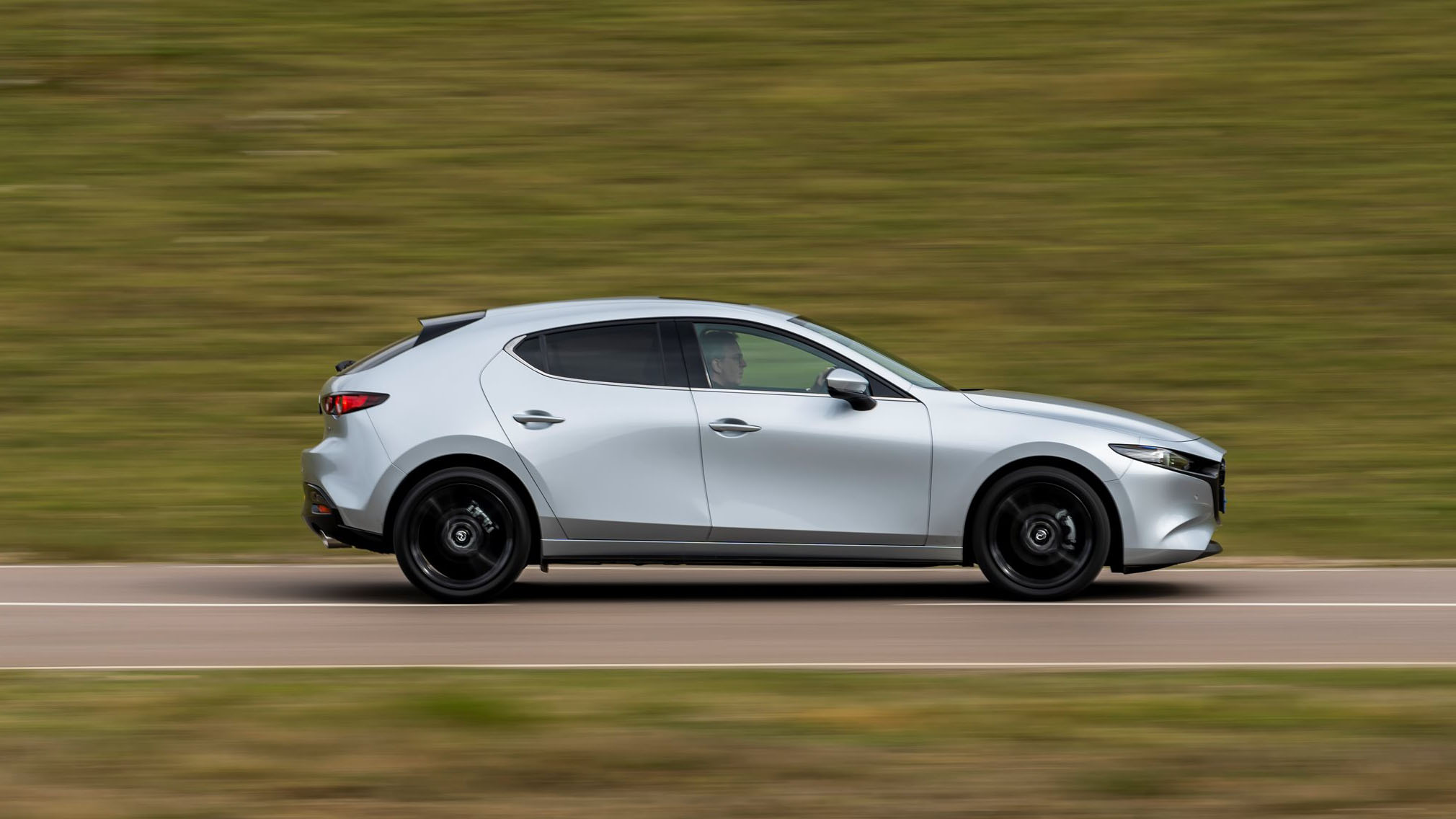 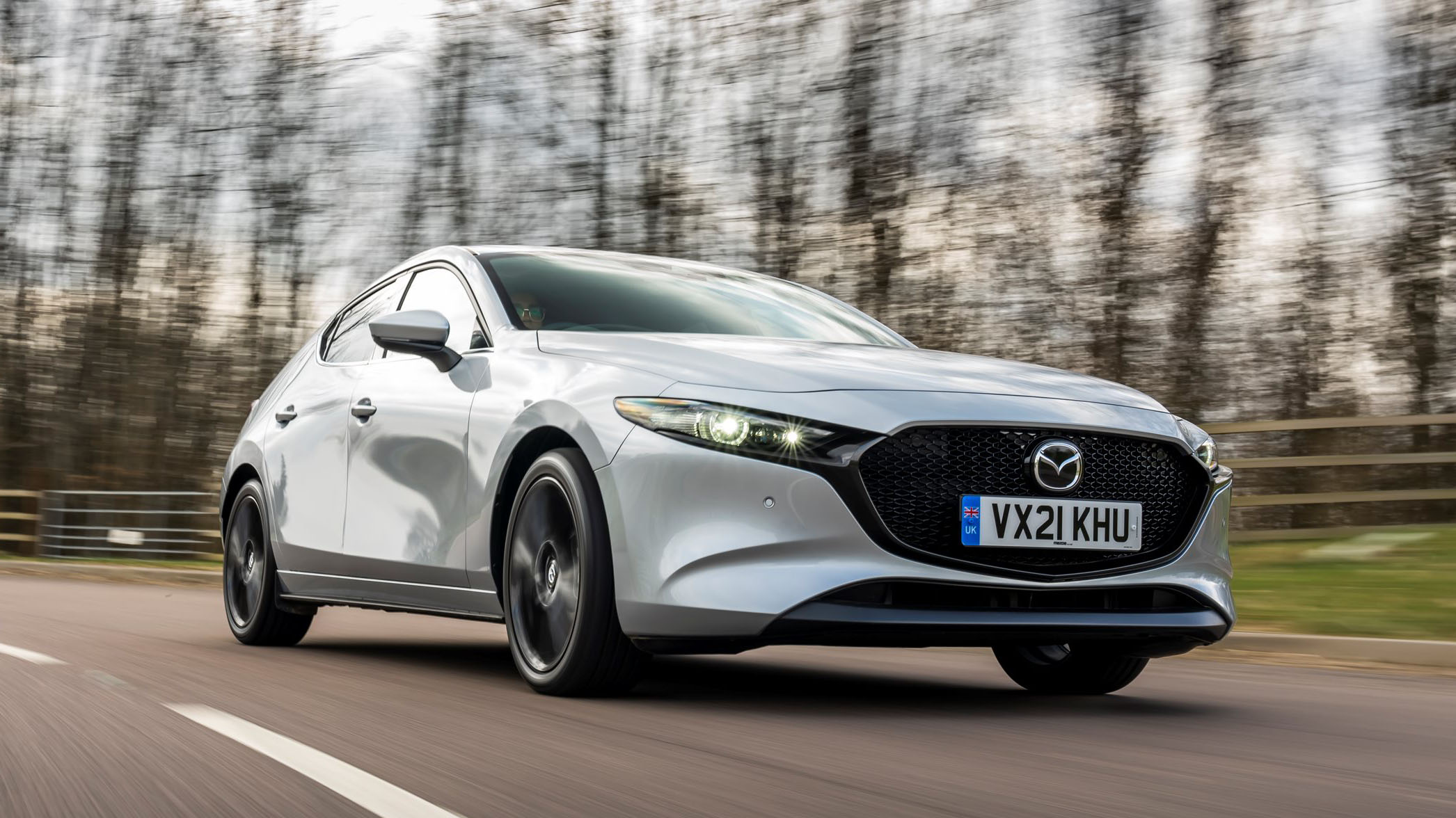 e-SkyActiv-X, eh? What a mess.

Not the most elegant badging ever applied to an engine, is it? Pity, because the car that’s wearing it – in this case the lightly revised Mazda 3 hatchback – is a very pretty bit of kit.

Only a very select few land on the ‘actually quite good-looking’ bullseye. Renault Megane perhaps… and this. With its long, imposing nose, neat taillights and pebble-bodied smoothness, the 3 manages to stand out without shouting.

Yep – if you’ve not been paying attention to Mazda’s heroic efforts to save the internal combustion engine, then long-story short: this is a petrol engine that thinks it’s a diesel.

The SkyActiv-X 2.0-litre engine contains four cylinders and doesn’t have a turbo. It actually uses a tiny supercharger to whack all that air into the cylinder. But that’s not half of the cleverness. See, as well as having conventional spark-plug ignition, this engine spends most of its time simply squeezing the fuel-air mixture until it gets so hot and bothered, it mostly explodes all on its own. The spark plug does the rest.

This has many benefits. Running a lean fuel-air mixture means a big bang from a tiny squirt of petrol. That saves you money on fuel, and lowers CO2 emissions. What’s more, NOx nasties are reduced because the burn is so instant and efficient.

Why isn’t everyone doing this?

Probably because they tried years ago and the tech wasn’t up to it. And these days, if you’re the boss of a car company and you’re in the boardroom deciding which pots to throw your R&D budget into, the bottomless hole marked ‘Electric Car Development’ is swallowing all of your pennies.

Mazda finally got this system into production in 2019. Engineers told us the theory had been perfected much sooner, but it had to wait on the drawing board for computer tech to catch up. It wasn’t until recently that processors could do the maths at the speed required to manage the engine’s ignition schizophrenia and prevent it detonating all over the inside of your garage.

Think of the million versions of Nissan GT-R. Think of the decade-long gestation of the mighty Lexus LFA. Think of Asimo, Honda’s humanoid robot. Japanese engineers simply don’t have ‘yeah, that’ll do’ in their vocabulary.

In short, Mazda’s been busy inside the engine. It’s emerged from the works with refreshed pistons, camshafts, and rebooted software. Even the coding for the 24-volt belt-driven starter-generator – which allows rapid stop-start in traffic and helps boost the engine’s torque – has been rewritten. 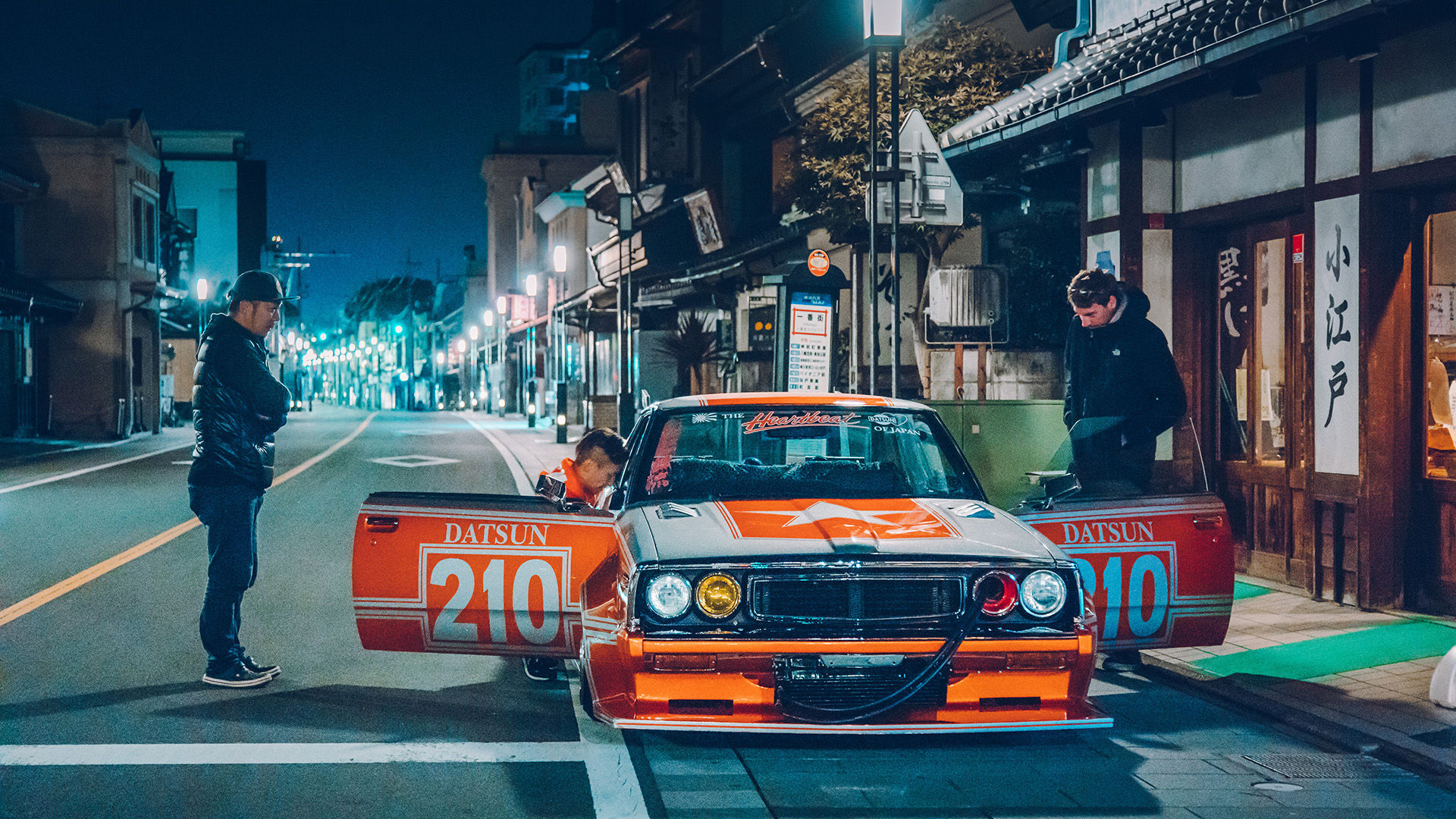 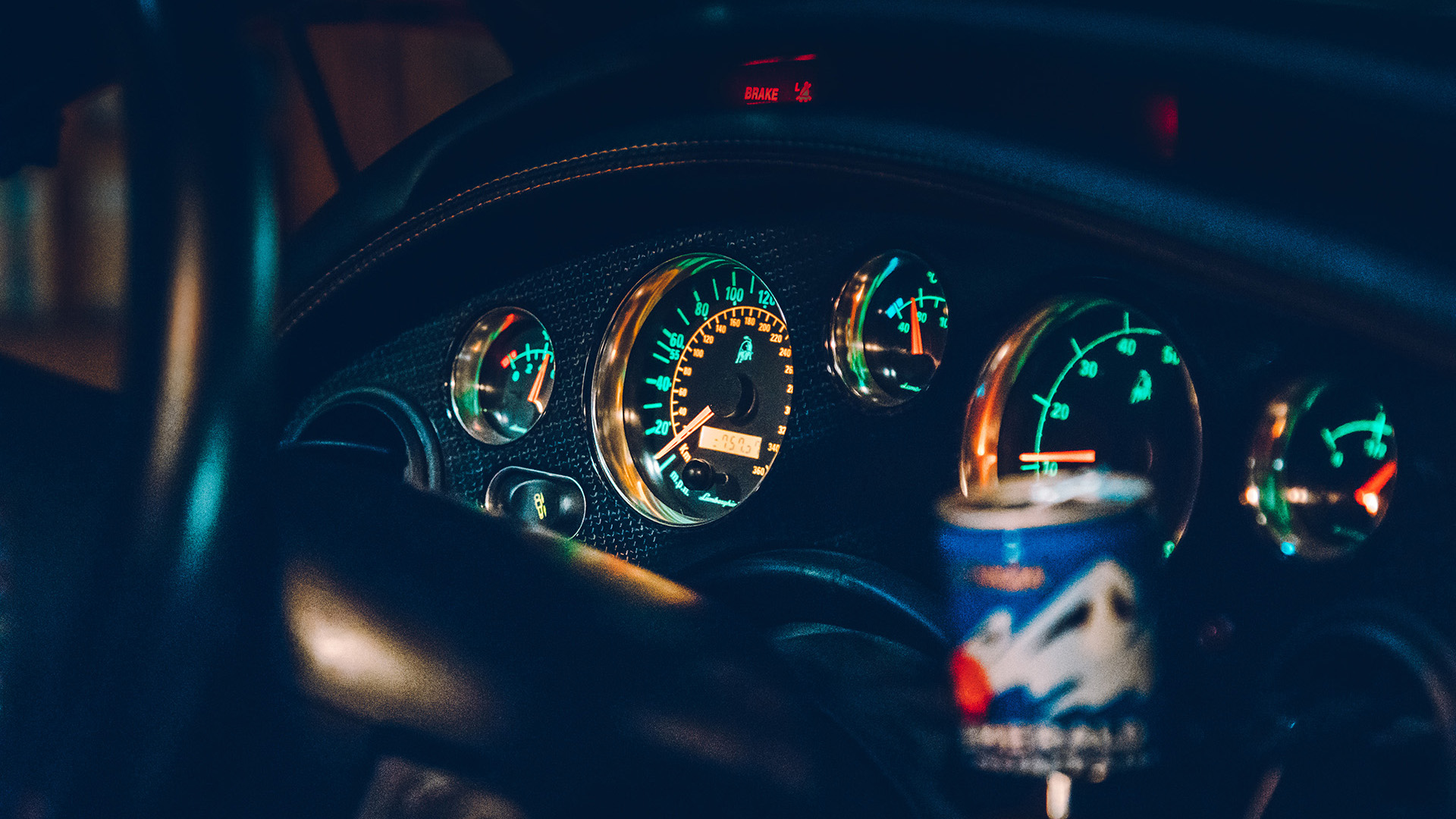 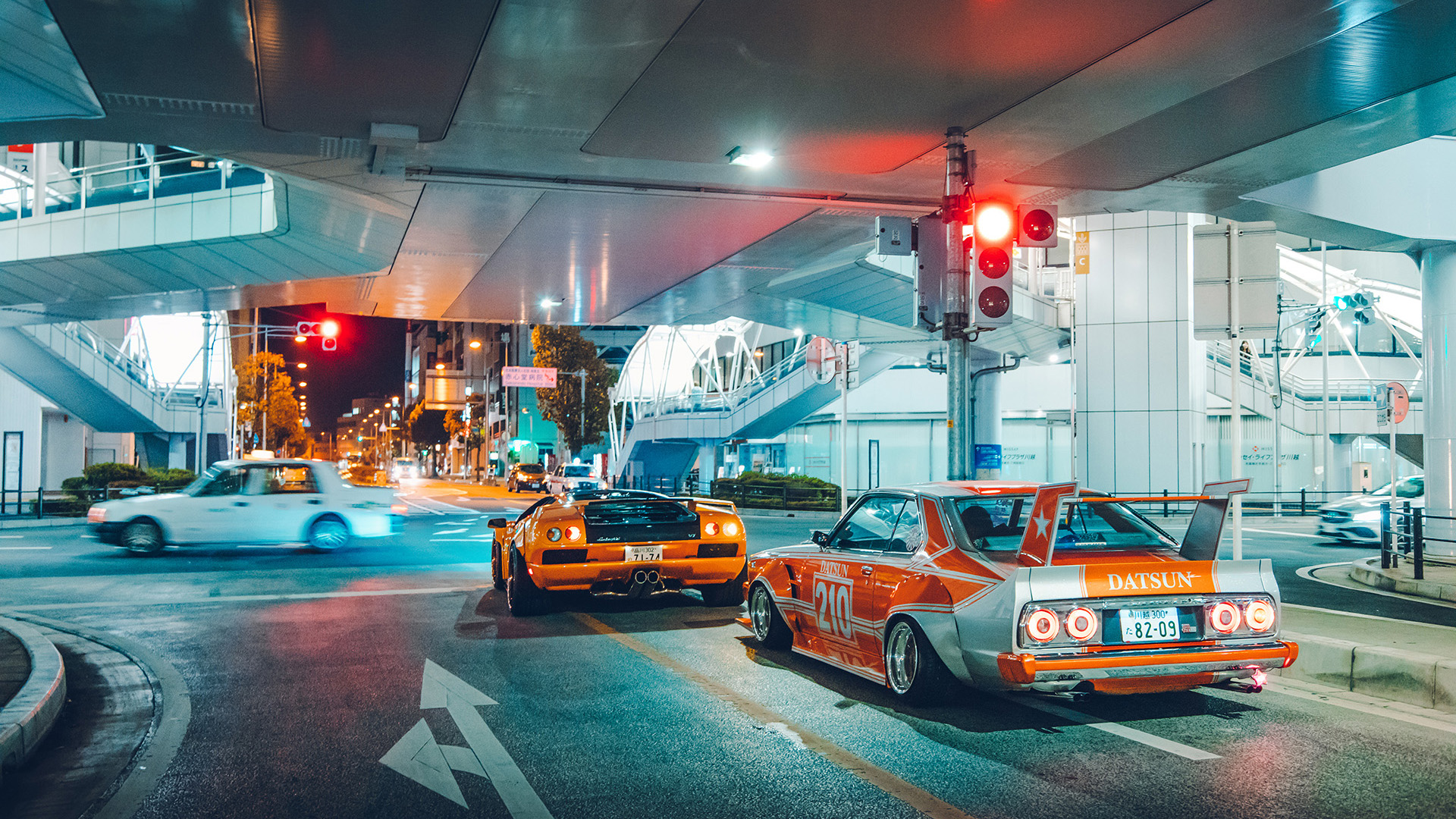 Are the results typically Japanese and nerdy?

Why yes, of course. All that budget which could’ve been spent on a crappy social media campaign or paying an influencer to daily an MX-5 has yielded an extra 6 horsepower and 11.8lb ft of torque. CO2 emissions fall by another few grammes. Nothing major, but all steps in the correct direction.

Better still. I first drove a prototype of this motor back in 2018, when it sounded like a canal boat and the throttle response was, erm, unfinished. The production cars were much better, and now Mazda’s raised the bar again. Cold-start in particular is less gruff, the engine revs cleanly, and the highest compliment I can pay the switchover between ignition strategies is that after a day, I simply forgot the car was performing engineering magic.

The killer question then: is it actually economical?

And the killer answer: yes, it’s spectacular. Lots of carmakers have claimed their new semi-hybrid petrol engines are ‘just as frugal as our old diesel, promise’, only to be proved wrong when they fall 20mpg short in The Real World.

I got 55mpg out of the 3 without much effort. Even when it’s really clogged (if you’ve been raised on a turbo-rich diet, rowing gears and using a revband will feel rather alien) it shook its head, folded its arms and stubbornly refused to do less than 50 to the gallon. It’s a bloody marvel.

So, it’s more refined, it’s green, and thanks to the slick, positive gearbox, it’s a pleasant powertrain to use. And then there’s the car it’s housed in.

Big claim time: the Mazda 3 has a more expensive, more user-friendly cabin than the current VW Golf, Audi A3 and Mercedes A-Class. The switchgear is simple, unfussy and solid-feeling. The dials are unconfusing, lacking in gimmicky animations or unreadable fonts.

Touch-sensitive sliders or haptic-feedback G-spots are wonderfully absent. There not a single piece of half-arsed Tesla copycatting in here. It’s a capsule of well-built common sense, with a cracking driving position, plenty of stowage and lots of equipment on this range-topping GT Sport version.

Steady on. It’s not perfect, I take it?

Nope, the 3 has its downfalls. That stupidly thick C-pillar erases rear visibility – funny how the only awkward bit of the design is also the most annoying – it’s just a smidge tight on headroom if you’re beyond six feet tall, and while the last couple of Mazda 3s had a Ford-like game-for-a-laugh chuckability about them, the new grown-up 3 isn’t quite as up and at you in the bends.

Besides the brake pedal, which is a bit mushy now the hybrid system is interfering, controls are well weighted and you’ve got to applaud Mazda’s honesty in just setting up the 3 to be comfy and easy-going, instead of lobbing in stiffer springs and overly twitchy steering (looking at you, Mercedes A-Class) and pretending something’s a sports-hatch when it really isn’t.

Go on then: money where your mouth is. This or a Golf?

The Volkswagen ain’t the benchmark do-it-all hatchback any more. Not with that risible button-free interior, lazy touchscreen and dumbed-down materials. Meanwhile, Mazda’s snuck in and played a good-looking blinder, even if it didn’t have an engine that ran on voodoo, I’d buy one over any other current family hatch.

With this e-SkyActiv-X engine and GT Sport trim, prices kick off at just under £29,000, which is a lot. On finance you’re going to be paying about £300 a month, which is more than the Germans want for their sub-200bhp shopping cars. It's worth it. This is the less complacent, better-resolved product.

If you want a car that feels like it’s been designed and built by thoughtful humans rather than a marketing PowerPoint presentation that’s come to life, get one of these.