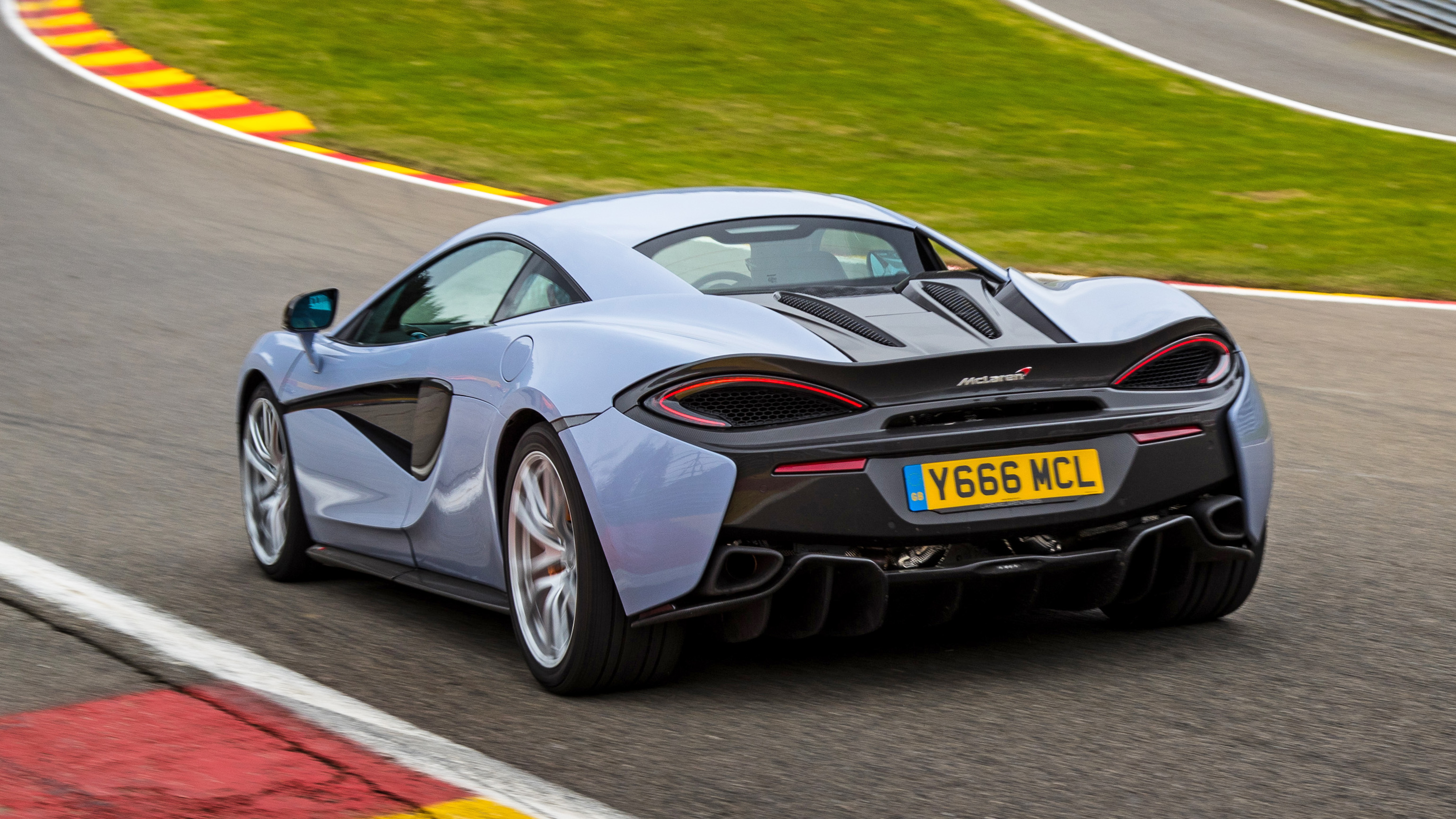 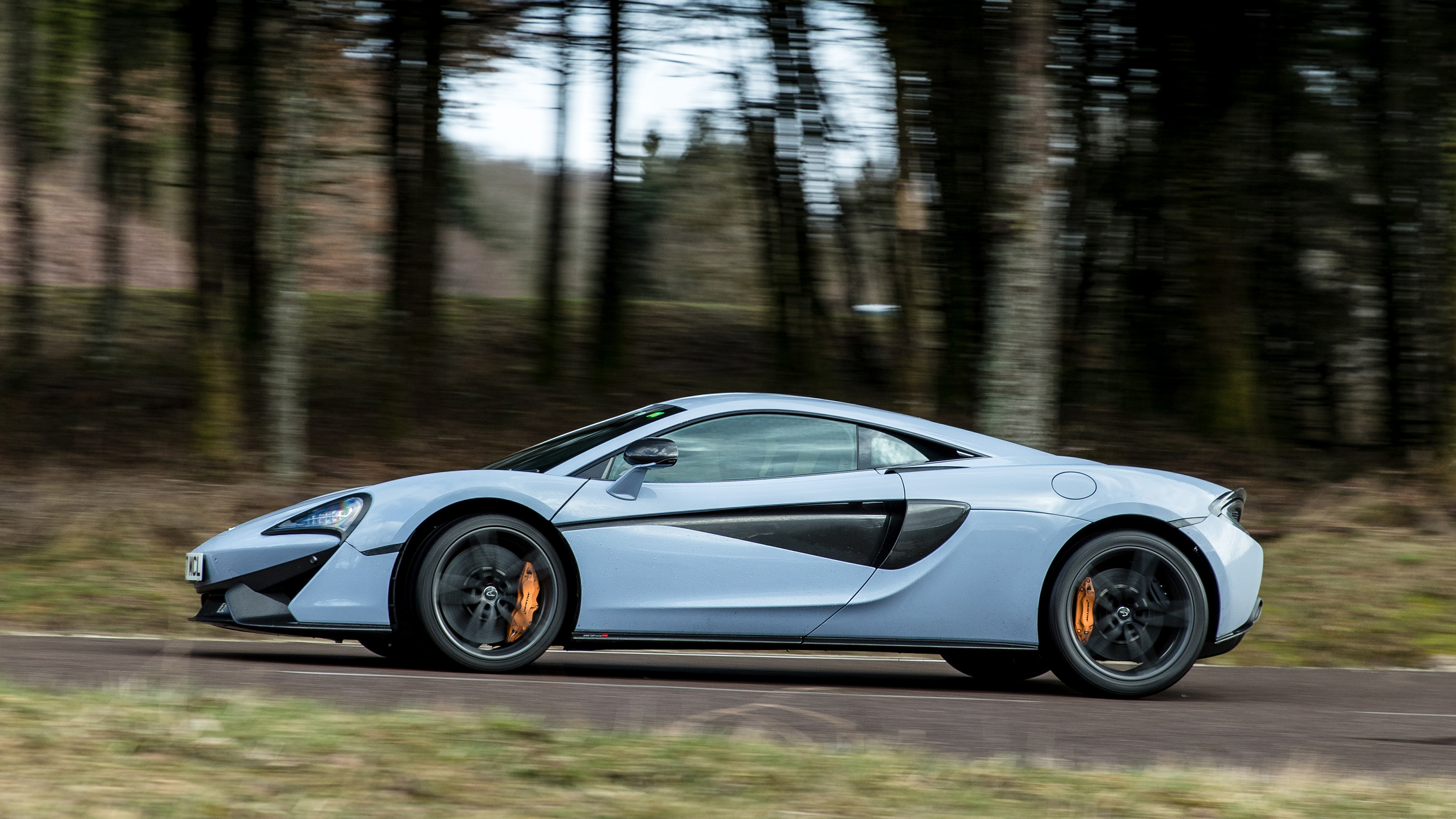 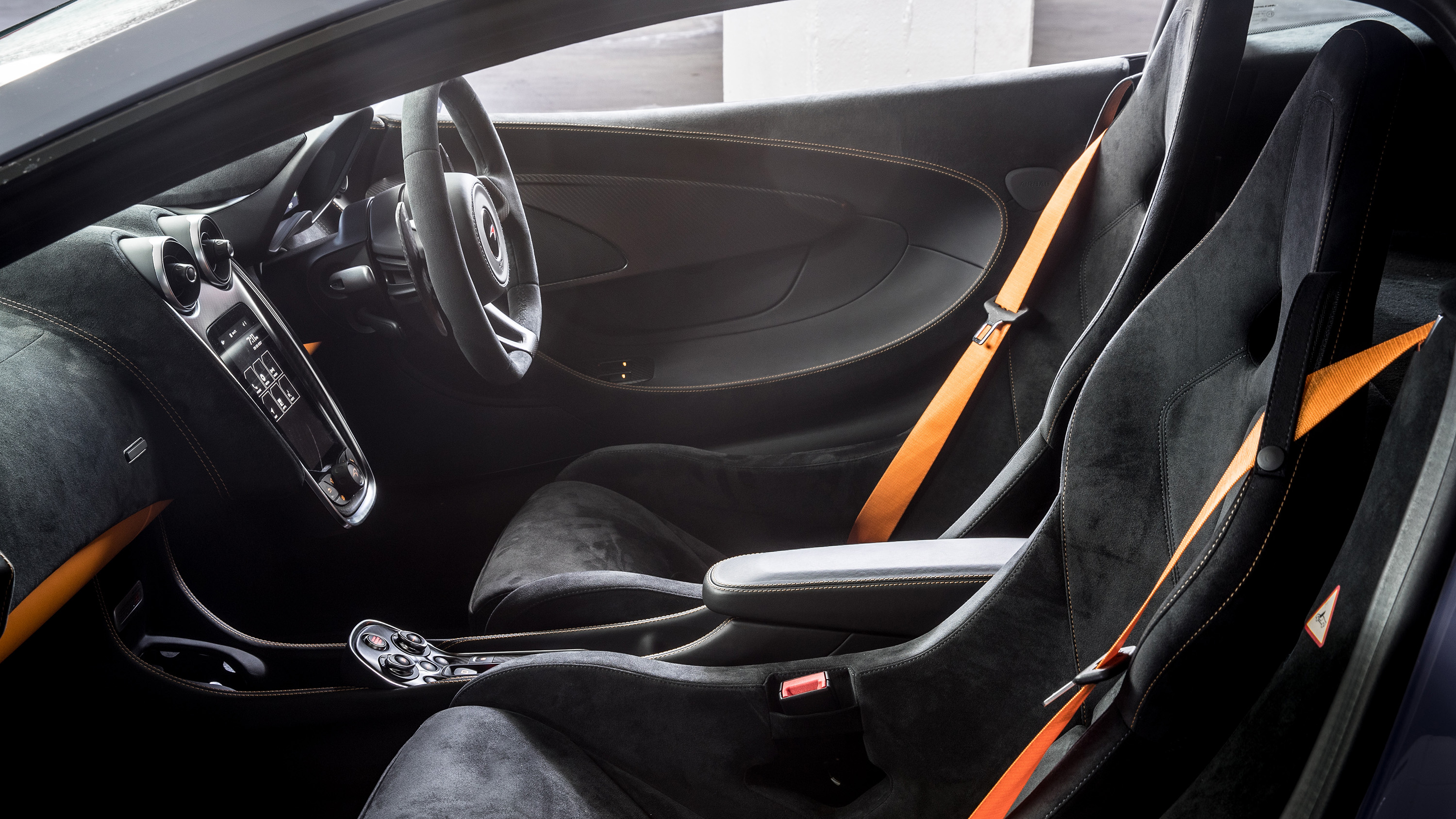 And while I’m letting you down, I ought to point out that it boasts no more power over the 562bhp 570S and no suspension changes, either.

Instead the Track Pack is chiefly about weight saving. It takes 25kg off the 570S’s 1313kg dry kerbweight. Or expressed another way, you pay £660 for each kilo saved.

Hmm, quite costly. Is it worth it?

In terms of weight saved, probably not – you just don’t notice. But in terms of the attitude the alterations lend the car, then quite possibly.

Outside you gain even lighter lightweight wheels, a matt sports exhaust, a Dark Palladium roof and a rear spoiler that is precisely 12mm taller and so delivers an extra 29kg of downforce at 150mph. So at high speeds, all those weight savings are cancelled out. Or something like that.

Inside, everything is swathed with Alcantara, there’s the Track Telemetry software from the 675LT and a pair of one-piece, fixed back carbon seats. More about those in a bit.

Do you get all the carbon with the Track Pack?

No, you don’t. You only get that if you tick the boxes marked ‘MSO Defined Carbon Fibre Exterior Pack’ and ‘Carbon Fibre Interior Upgrade’. The former is £9,900, the latter £5,400.

So, would you spend the extra?

Probably, yes, although I’d have a good look at the options list to see if I could get the ones I wanted for less.

This chiefly involves the Alcantara steering wheel. It’s utterly sublime. The rim diameter, the firmness, the tactility, the shaping, the positioning. I can’t think of another car I’ve climbed into, and laid hands on, that instantly felt so right.

This is the steering wheel only, though, not the seats, which are tight. There’s not much of me and my hips only just slotted down through the bolsters. Maybe McLaren is deliberately limiting weight by ensuring the, uh, bigger boned amongst us don’t fit.

Once in, these surprisingly reclined seats are the dog’s wotsits – barely any adjustment, but you never need any. There’s a low scuttle, zero dash reflections due to the Alcantara, and nothing else to concern you – until you need to get out. The extraction process is demanding.

I don’t want to get out, I want to drive.

The best thing I can say about the Track Pack is that it takes the 570S closer in feel and texture to the 675LT. I don’t think it feels any faster now, nor do I think the Pirellis grip any harder.

But whether it’s the steering wheel or simply just my imagination, the 570S has never felt more tactile, responsive, agile and intuitive than it does here.

And it’s so unflappable. You turn, you enjoy fabulous steering feel, and the car goes round the corner. Simple pleasures. You’d have to be going so fast to get it to move around that you’d need a track. Which I guess is kind of the point of a car named Track Pack.

At ‘regular’ speeds it’s just supremely flattering and utterly secure. And this despite the speeds it’s capable of hurling itself to.

In fact, the more senior 650S is no faster, nor the Ferrari 488 GTB. And this 570S’s launch control system is stunningly effective. I tried the same with an AMG GT R last week and it just wouldn’t learn the surface, it would scrabble and wheelspin. The 570S just takes off.

Okay, so its engine sounds a bit dreary when pottering around. And even at full chat, the best thing you can say about the noise is that it’s hard-edged and makes the car sound focused and intense. But the speed it dials up once the turbos are puffing post-3,000rpm is nuts.

Yet even this much speed doesn’t upset the Track Pack. Like I said, unflappable. So the 25kg weight saving is nothing in the grand scheme of things, what’s important is that McLaren has always had this weight saving focus – at 1,313kg dry (circa-1,420kg with fluids) the 570S was never heavy.

You could live with it every day easily enough, provided you obeyed two rules: a) you don’t carry a passenger too often, and b) you upgraded the stereo. The standard one is tonally a bit flimsy and on coarse surfaces conversation sort of takes a natural break.

But the ride? That’s exceptional. Either leave it to its own devices, or press the Active button that controls the handling and powertrain settings.

I left it in normal almost all the time. On the road, it’s perfect where sportier settings introduce a hint of jiggle. Point the powertrain switch to wherever you like as the throttle, engine and gearbox calibration are all bob-on.

Not too comfortable, though? It’s a track car!

To drive, this is my favourite car in what we should probably now call the entry-level supercar class. The Audi R8’s V10 engine is transcendental, the Porsche 911 Turbo is the all-weather, all-purpose master.

But the 570S, even though it’s turbocharged, is the best handling, most involving car to drive. The Track Pack simply adds a bit of polish and sharpness to what was already a stunning motor.