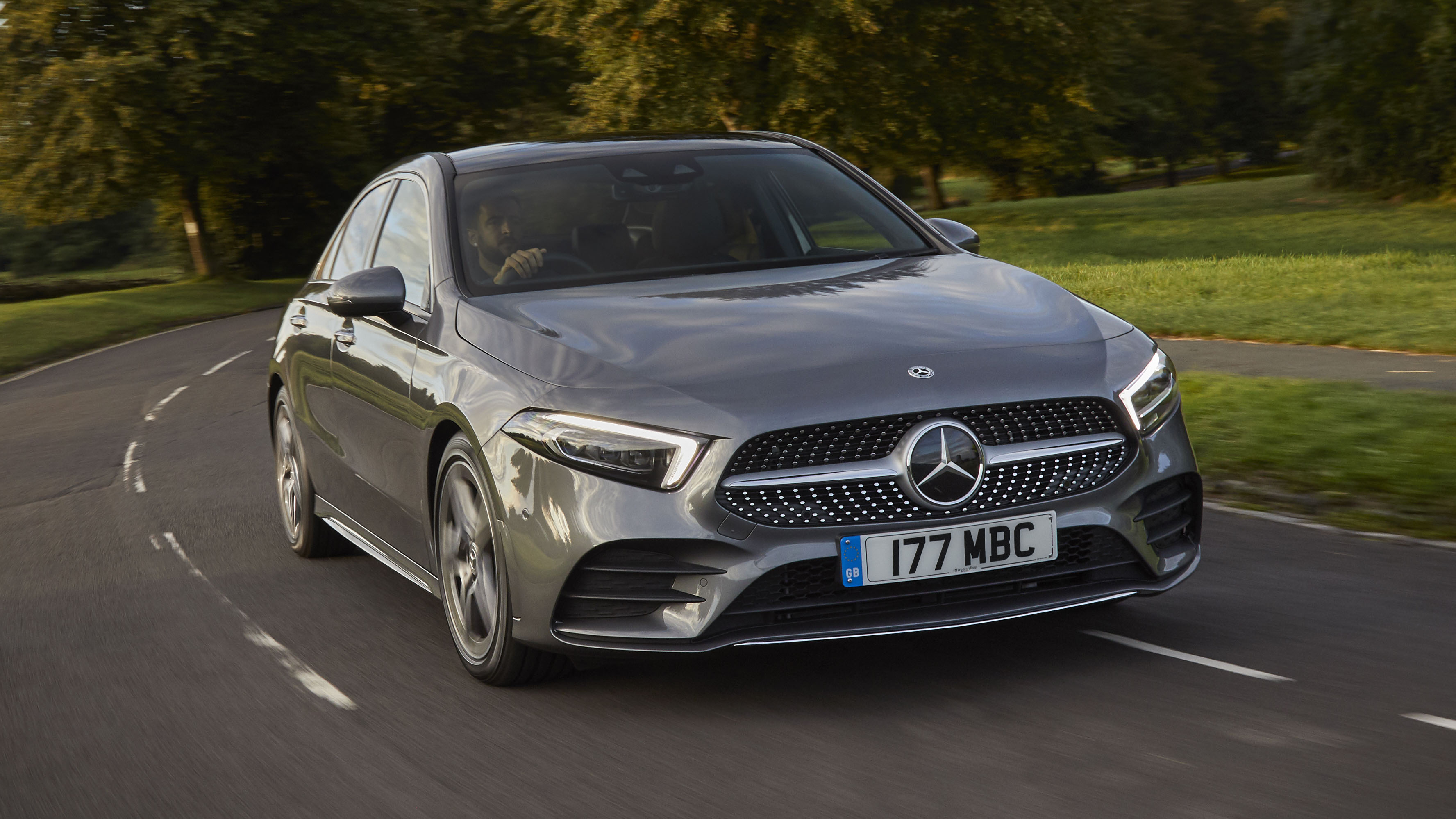 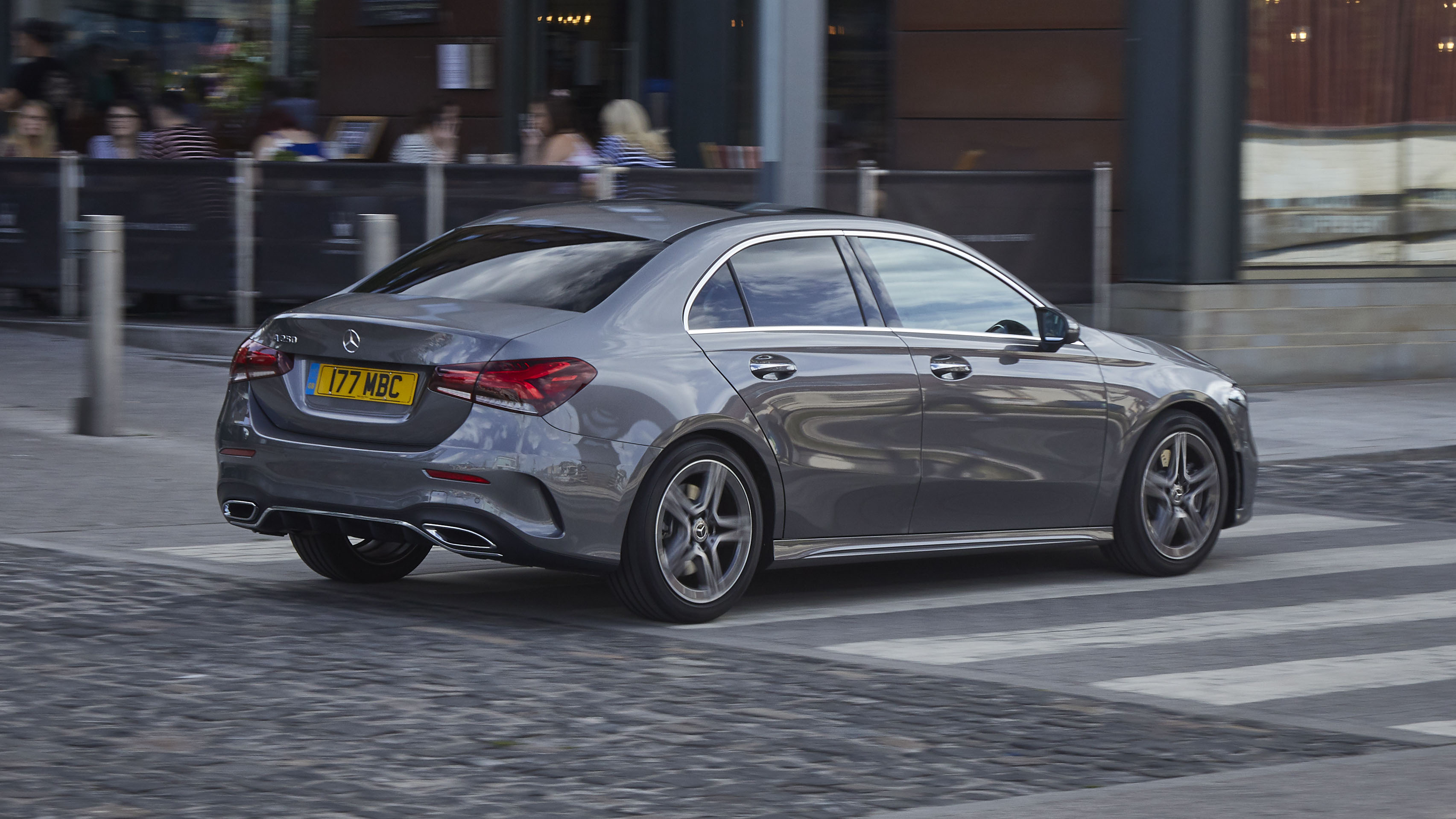 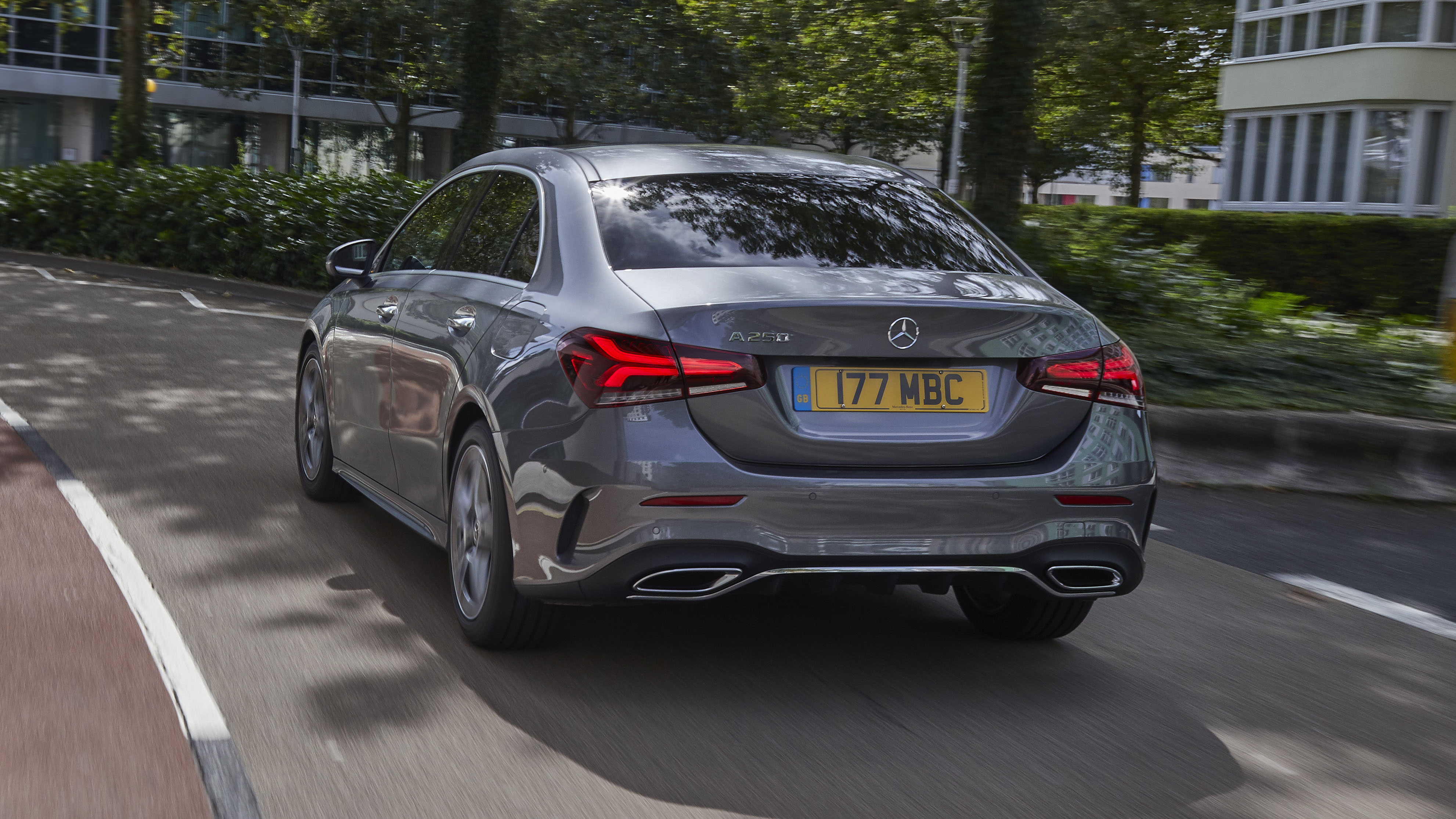 A saloon, eager young Padawan. These things were all the rage once upon a time, before the car industry went all ‘pumpkin spice latte’ and decided what the world needed was yet more crossover-coupe-SUVs and shooting-brakes-that-are-just-swoopy-estate cars.

Mercedes-Benz, no stranger to pumping out cars to fill ever decreasing gaps in the market, has given us something quite simple instead: a traditional four-door saloon version of its new A-Class hatchback.

Wait, isn’t the CLA a four-door version of the A-Class hatchback as well?

We did literally just say Mercedes-Benz is prone to filling in ever decreasing gaps in the market. But yes, the CLA is supposedly the ‘dynamic’ one. This is just… an A-Class saloon.

Handsome thing it is too, resplendent here in AMG Line trim. Good proportions, a nice stance, not too big and unwieldy, compact. A good size.

Does that mean it’s compact inside, too?

A little, yes. The rear leg- and knee-room is a little compromised if you’re sat behind two reasonably-sized adults, so it’s a better fit for smaller children, or shorter adults. The headroom’s not bad, mind.

Elsewhere inside it’s exactly the same as the new A-Class, which means SCREENS. AMG Line trims automatically upgrade the pair of 7in screens (presented seamlessly as a massive single screen) to 10.25in wide, which is what we’ve got here. They’re very pretty to look at.

As ever, the driver’s screen is operated via a wheel-mounted touchpad, while the centre one is operated via a trackpad or actually touching it. Though it’s a bit intimidating upon first introduction, you’ll no doubt quickly figure out what’s what, set it to how you like it and just crack on. Such is the way with these things. And anyway, it looks pretty.

Looks aren’t everything though.

What we tell ourselves every morning, friend. The implication is clear, mind: it has to drive like a Mercedes. The one we have here is the A250 petrol – which means a 2.0-litre turbocharged four-cylinder, 221bhp, 258lb ft of torque, front-wheel-drive, the fancier multi-link rear suspension setup (as opposed to lesser models’ torsion beam) and a seven-speed dual-clutch auto ‘box (with wheel-mounted paddles) imported from the last gen A.

How does it drive then?

Prosaically. It doesn’t dance through corners but gets through them effectively. The ride too, is comfortable enough, but not as well damped as a Mercedes should be. It gets a little ruffled too often across a range of road surfaces to be properly luggzurious. Our test car’s 18in AMG Line wheels probably didn’t help the cause, either.

The engine is decent too. It doesn’t make the most engaging noise, but it is rapid: Merc claims 0-62mph in 6.3s, and it runs into its 5,800rpm limiter quite quickly indeed. Progress isn’t an issue, and of the new A-Class’s engines, this one’s on the more desirable side of the spectrum.

The gearbox however, remains a bit of a bugbear: not quick-witted enough, a little lurchy in everyday traffic situations and not as responsive as you’d like when you’re clacking through the paddles in say, Sport mode. The steering too is effective – in that it literally turns the car where you want it – but doesn’t sing back to you about what the front wheels are doing. It's good enough, mind, and Sport mode gives it a welcome heft.

You see what we’re getting at here? It drives very... dependably. It’s just that a car with a reasonably powerful four-cylinder turbo engine with good pace that looks like this ought to excite us a little more.

Most buyers will care more about the interior cabin and refinement though, won’t they?

Exactly that. Merc has pitched this new A-Class firmly into that territory, and for the most part it succeeds. There’s a case to be made for this saloon – it’s rare, it’s pretty, the A250 is fast enough for your everyday needs and for a small family it’s practical enough (the boot’s fairly substantial for a car this size too, at 420 litres).