£143,305 when new
Read why you can trust our independent reviews 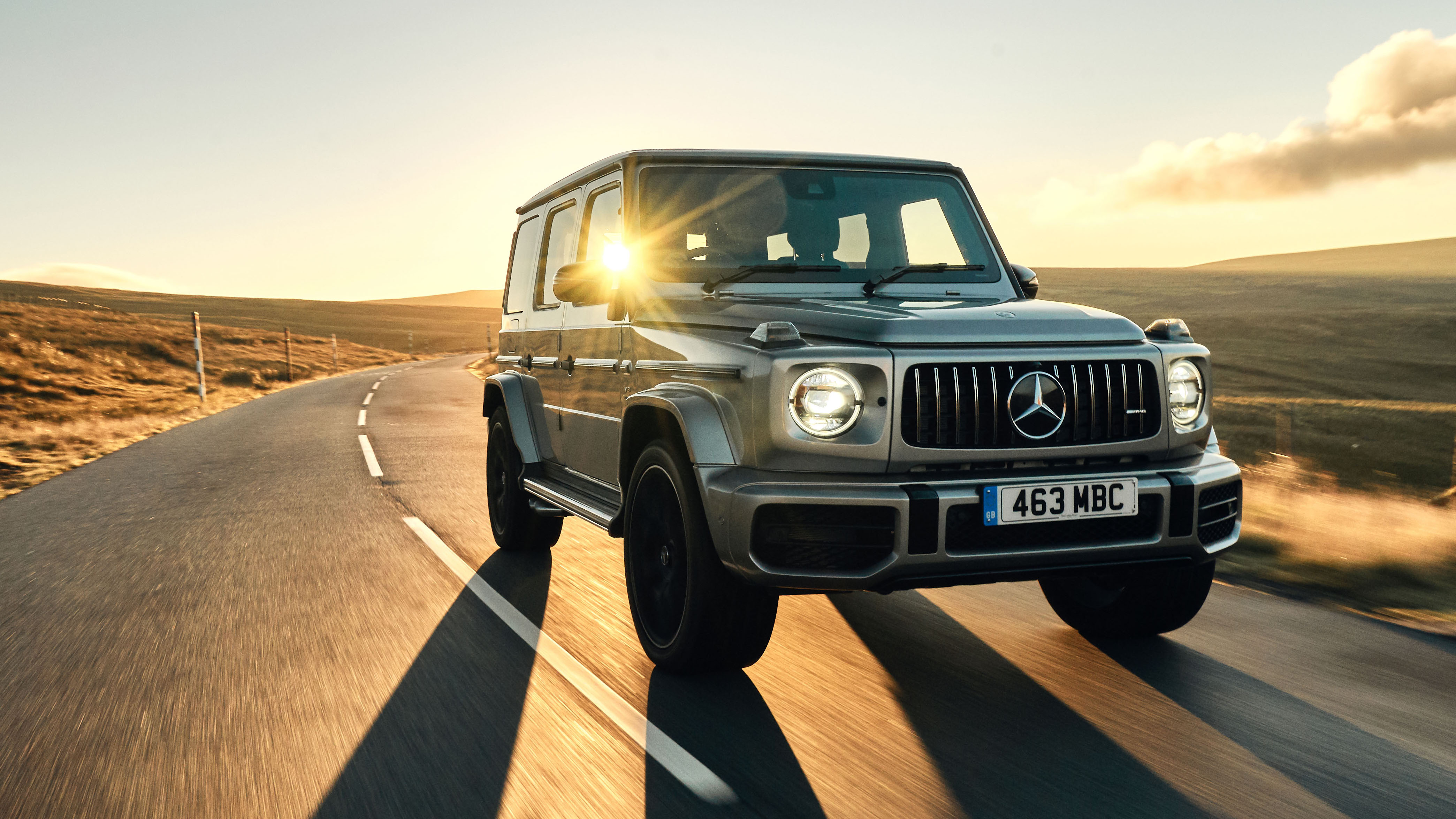 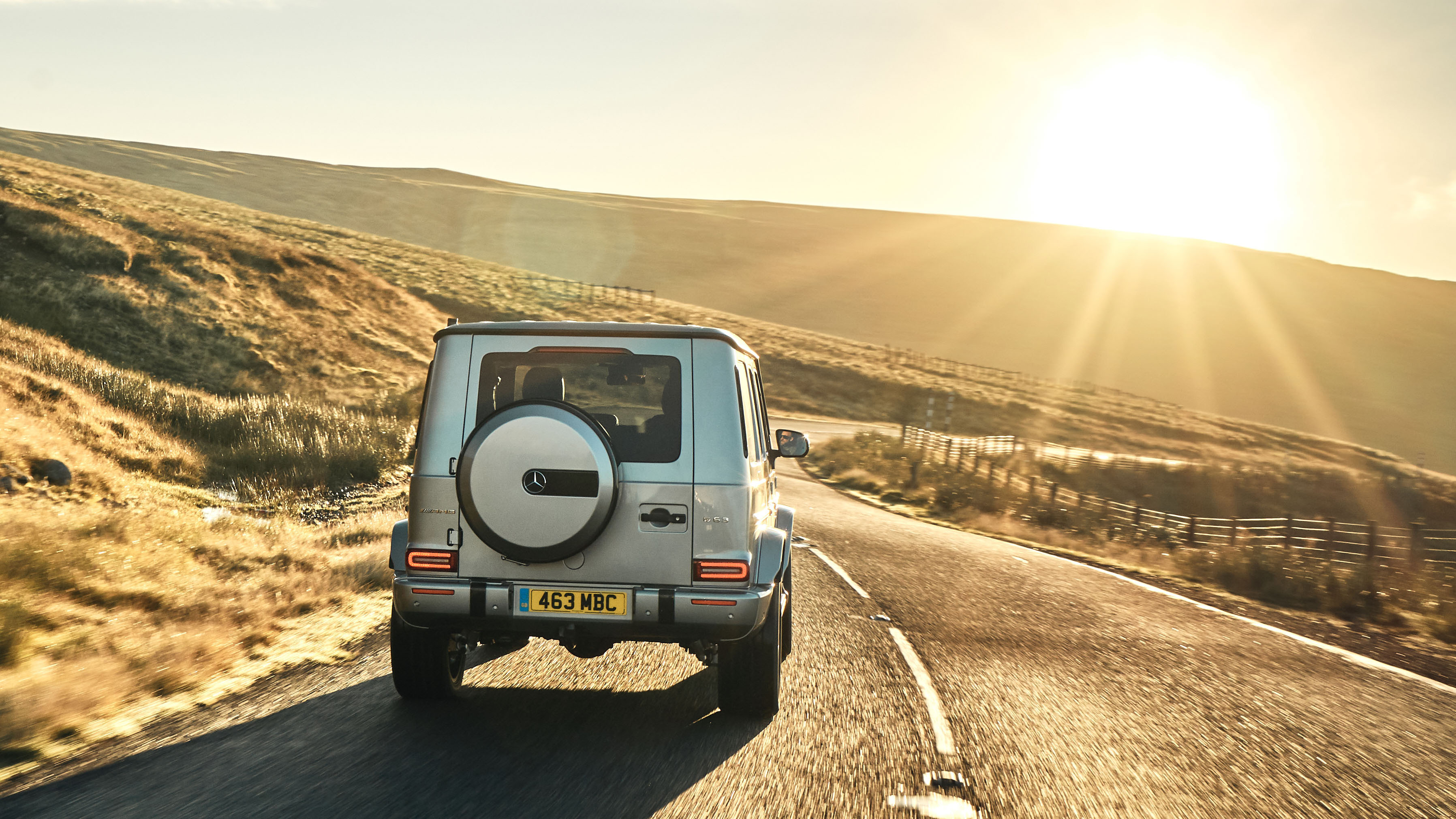 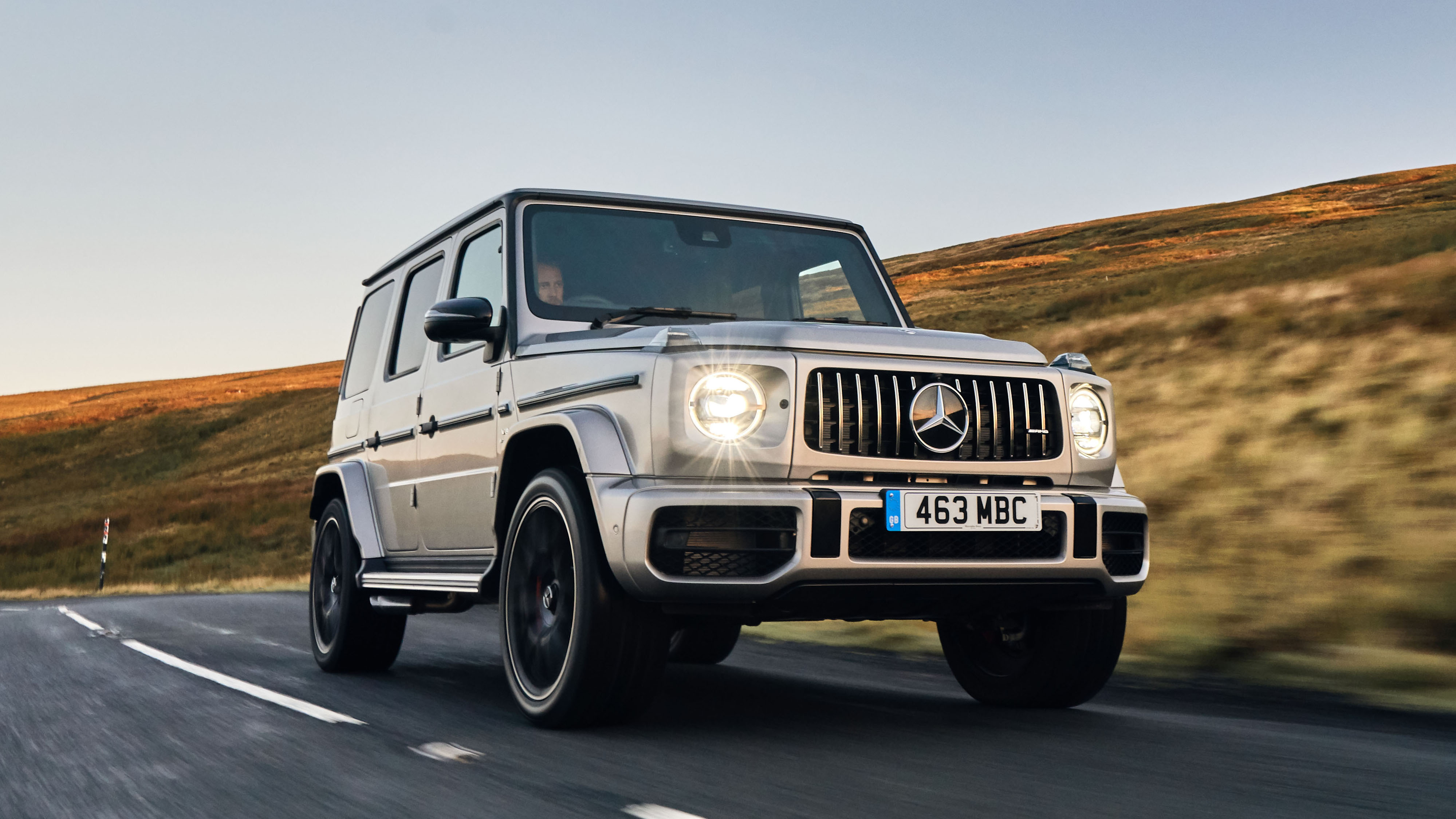 Who the heck is going to be seen dead driving an AMG G-Class in the UK?

Anyone who buys a G, for the time being. Mercedes is still hand-wringing about whether to offer the 447bhp G500 in Britain, and the sensible (hah!) straight-six diesel version isn’t on sale here either yet. So, the G-Class (as it’s officially called, though we’ll still default to the German, thanks) enjoys a unique distinction in the Mercedes range. Right now, it’s the only member of the main Benz family that’s only available as a hard-charging, hard-drinking AMG version.

So what the blazes does a G63 produce?

Thanks to the same 4.0-litre bi-turbo V8, albeit with the wick doused in napalm, you get 577bhp and 627lb ft of torque. The engine is effectively identical to the powerplant of AMG’s current flagship, the GT R. Note that this is a G63, too, not a G63 ‘S’. No hierarchy semantics here. Good.

That power output choice is significant, because it tells you just how thorough the new G’s architectural overhaul has been. The old Gs, magnificent though they were, always got detuned V8s because their archaic ladderframe chassis would’ve origami’d themselves if presented with a full-fat arsenal of AMG firepower. For the 2018 G63, you’re not shortchanged.

Even though there’s still a low-range crawler mode, and locking diffs selected by a trio of metal buttons in pride of place atop the dashboard, ultimate power is handled by a modern transmission. AMG’s nine-speed automatic, as proven in the GLC63 and E63, gets the nod.

Sounds a tad over the top.

Oh it’s much sillier than that. Mercedes could’ve stuck with, say, the C63’s tune and gone for 503bhp with no ill effects, but they’ve gone for it properly and the results are spectacular. And not just the raw urgency, which calls up 0-62mph in 4.5 seconds, despite a kerbweight on the wrong side of 2.5 tonnes. Nor is it the top speed, which despite fighting the aerodynamics of a multi-storey car park, is dangerously close to troubling a 155mph limiter.

The G63 has one of the most stupendous, drenched-in-theatre power deliveries of any modern car. It’s the incongruity of it – the razor sharp AMG hot-vee throttle response, the savage side-piped bellow, the almost hyperactively keen, short-geared nine-speed ‘box – matched to physics from the Industrial Revolution. Request full warp and there’s a moment of glorious alarm as the rear squats down so far you half expect to hear the spare wheel cover, held shut by a beautifully machined clasp that could’ve been designed to mimic Kendrick Lamar’s wristwatch buckle, graunching along the ground. Meanwhile, the indicator turrets – vital for spotting the offside wheelarch extremities – rear up to the heavens. I’m convinced Mercedes could’ve engineered some sort of air suspension compensation to counteract the squat-thrust wheelie the G63 wants to pull, but it didn’t. Probably because the test drivers couldn’t stop giggling.

The V8 doesn’t sound quite as crisp as it does in say, an E63, but the sensation of your ears detecting noise spewing from under your hips, rather than behind your head, makes up the shortfall. Take any distraction you can get from noticing the pin-sharp digi-dashboard is reporting your motorway economy of 16mpg has just dropped to, um, eleven. And decreasing. 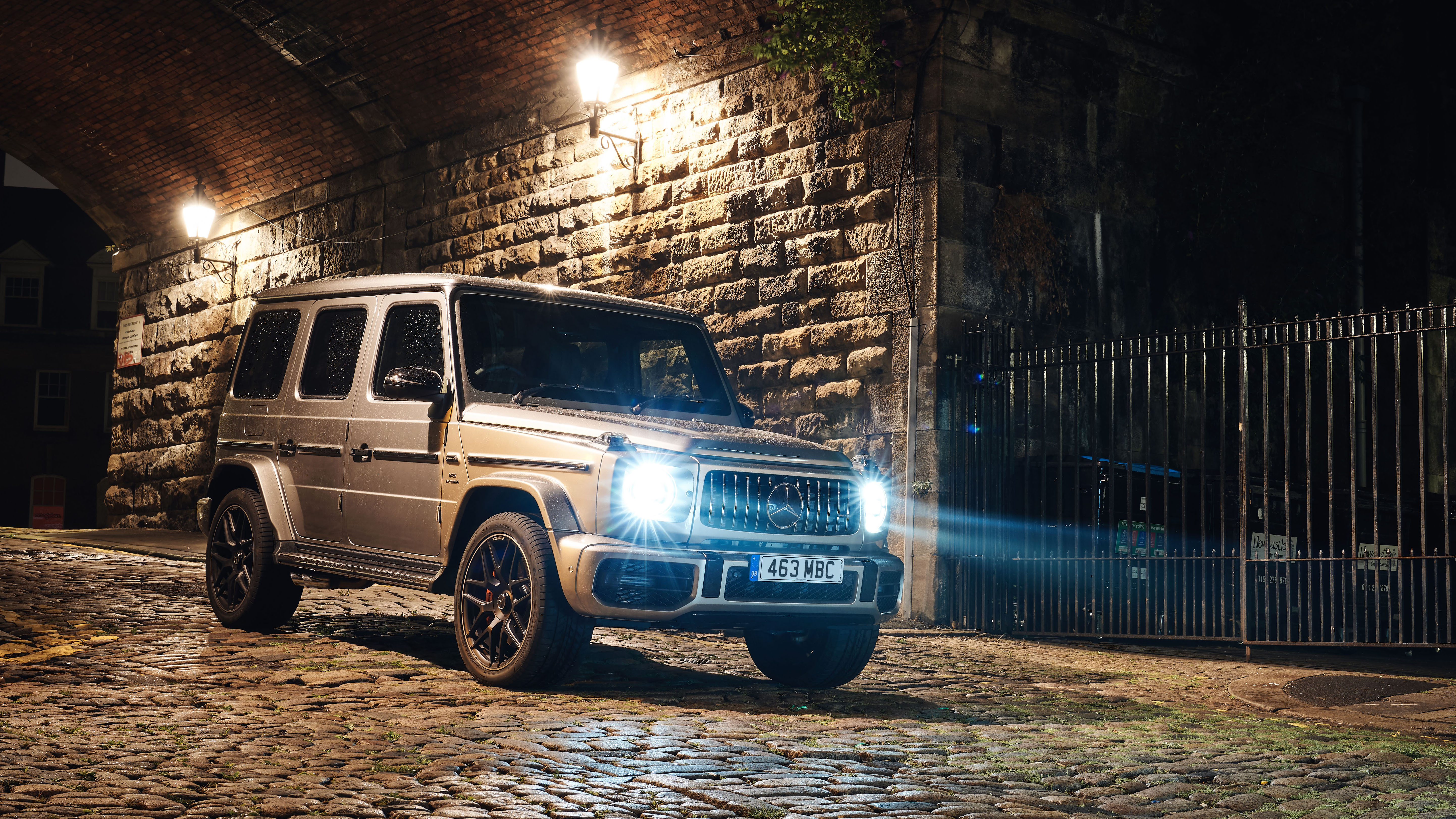 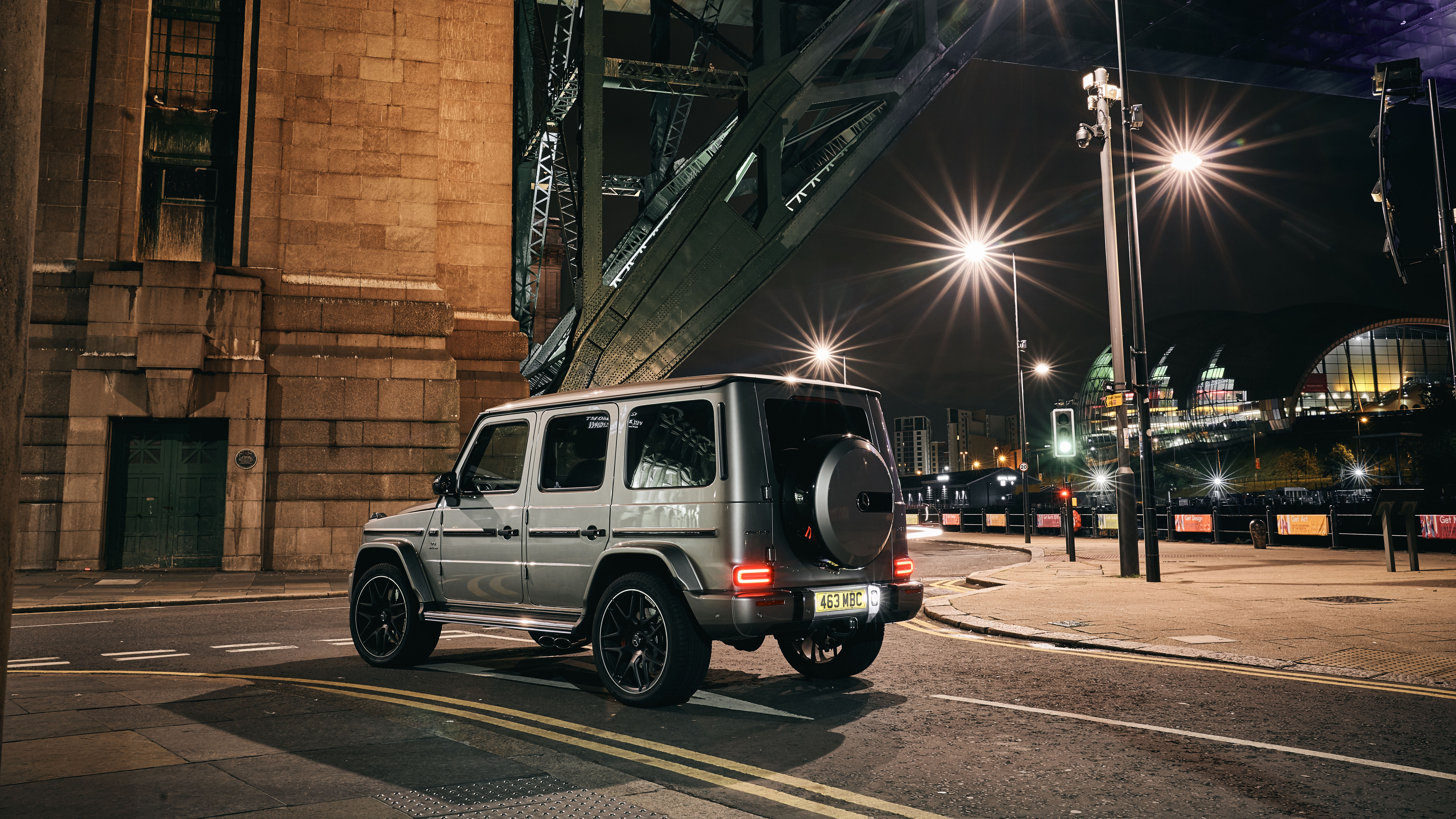 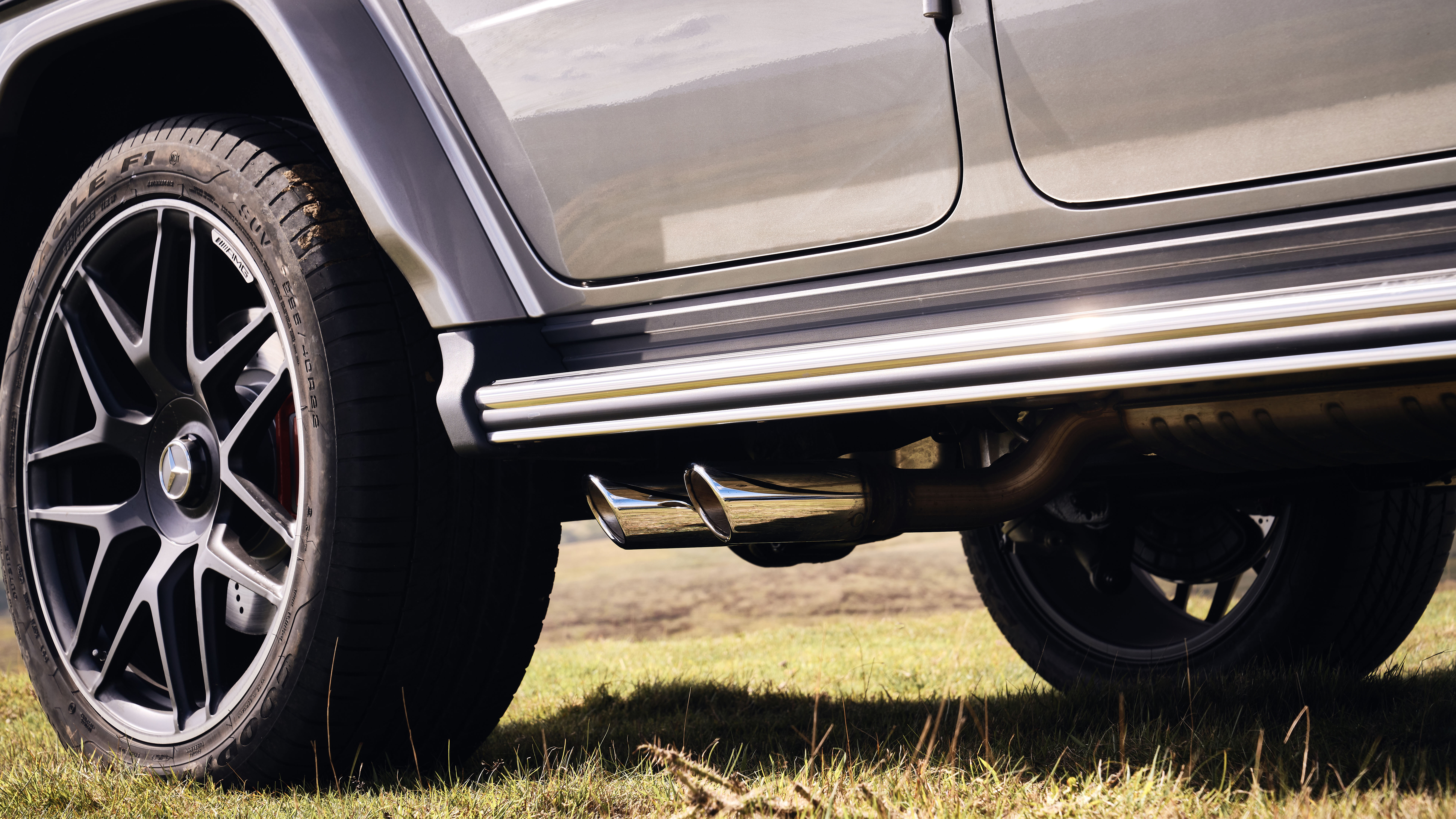 In Britain? Good luck with that.

A full tank of super-unleaded to sate the G’s appetite lightens your wallet by more than £100. The CO2 emissions are titanic. So I expected the reaction to the G63 to be the same as my assumptions – that this would be an overmuscled, subtalented, vacuous anachronism.

But just as the G63 was melting my frostiness, it set about winning over hearts and minds. Two passing snapback wearers reliably inform me that the vehicle is in fact ‘sick’. Couldn’t agree more. From my lofty vantage point, I clocked grown men cracking grins, and ladies pushing prams pointing the source of the thunder out to their young. The elderly are less impressed, mind.

How does it handle rubbish British road surfaces then?

If you’re stepping in from an old G-Wagen, very handsomely indeed. It's rid of ungainly axle tramp, the steering is more positive and obedient, and the motorway ride doesn’t thunk jolts through the cabin like the chassis is stubbing its toe.

Understeer and the humourless traction control intervene long before that body roll becomes an actual somersault.

However – and be honest, you knew this was coming – compared to a more rational (if such a thing exists) super-SUV like a Range Rover Sport SVR or Porsche Cayenne Turbo, it is not ‘surprisingly carlike’ or ‘uncannily chuckable’, or any of the other inappropriate phrases that modern suspension and electronics have blessed upon other ultra-tanks.

The G is still a galloping pantomime of a car, careering at the horizon with unstoppable momentum. The steering’s got a reassuring meatiness to it, disguising a generous dollop of play that makes no odds on your general heading. Every prod of the throttle or brakes pitches the G around on its springs like a fairground rodeo – though crucially, it never feels like it’s top-heavy. Understeer and the humourless traction control intervene long before that body roll becomes an actual somersault.

Unwieldy it may be, but the ride is a bit of a revelation for the new G. I discovered the other day that AMG set up the suspension and steering for all new G-Classes (obviously making this thing corner was a job for the maniacs who think a family estate car needs 600bhp and a drift mode, gawd love ‘em.) The adaptive dampers are best set to Sport, tightening up some of the more lollopy motion but without concreting the ride quality. Again, compared to a Cayenne or Urus, it’s kind of all over the place, but it’s a gigantic improvement on the old G, and there’s space for your elbows to live this time.

For raw performance, yes. For breadth of ability… no. It’s surely fabulous off road but there’s too much motorway drone and too little handling finesse to make this a truly all-occasion vehicle. And there’s not as much room inside the boxy cabin as you might expect, with the rear seats short on legroom.

But it’s a fabulously high-quality item, rich in tech, more livable than any G before it, and most of all, it’s a giant occasion of a car. You’d need a device with a mid-mounted engine, a roofline adjacent to your belly button and active aero to turn as many heads, or feel as special.

Even unlocking the G, and hearing those whipcrack locks slam open makes the hairs on your nape prickle. No-one else makes a car like this, so authentic and yet so silly. In a way, this heavy, thirsty, unnecessary machine distills everything we should hate about modern cars, but the G63 is pretty much everything that makes the automobile worth loving instead.