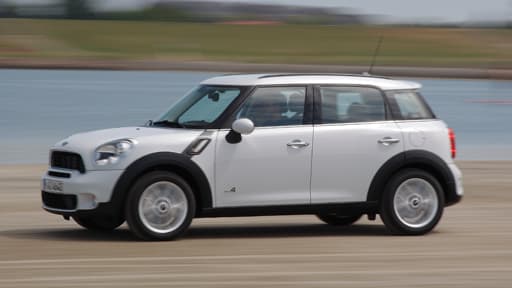 The Mini Countryman will split opinion. For some this is the quintessence of automotion, the answer to their every wish and whim. For others it's a cynical culmination of ideas, where pointless fancy and overt consumption collide.

The new Mini has always been small. Not on the outside, but inside, where intelligent design packaging took a backseat.

The Clubman first endeavoured to answer the problem, to make a more practical, family-oriented Mini, and failed spectacularly. In the style of an errant Olympic downhill skier perhaps: so dreadful to watch that you couldn't tear yourself away.

So now the turn of the Countryman, a Mini by name, but not by dimensions. Here, at long last for many, is the product they have been yearning for, a car that capitalises on Mini's distant heritage, maintains its current kudos and yet still offers a practicable solution to the challenges of modern life. Like breeding and grocery shopping and having legs. For the interior of the Countryman is massive, not just by Mini standards, but by standards set in segments for larger cars. Mini claims that the Countryman's boot is bigger than that of a Golf, and that its rear space is more generous than the BMW X1. Big achievements in big-ness.

The flipside of this ought to be that the Mini is no longer mini, and therefore shouldn't drive like a Mini is meant to. The Mini men clearly got very nervous about this and have spent a great deal of time trying to assure themselves, and us, that the Countryman is every inch a Mini in the dynamics department.  Does Mini protest too much?

On first inspection the Mini is, well, an opinion splitter again. Is it a bit ugly? From some angles it seems odd, and its unprecedented size and ride height play havoc with your Mini preconceptions. But it's probably one of those cars that will quickly start to look right on the road, in part due to its inevitable ubiquity, and in part thanks to that strong brand identity and some deft design touches. That odd downward kink at the rear of the roofline, for instance, enables the Countryman to maintain Mini's trademark floating roof without it looking uncomfortably long. And the overall effect is undeniably clever. Here is a car far larger than anything else from the Mini stable, but still possessed of that small car appeal, that cheekiness and vim that became its USP some 60 years ago.

Inside, Mini's maturation is all the more overt, and impressive. After years of ignoring the criticism, the designers have finally dispensed with the crappy silver plastic trim around the instruments and integrated them into a meatier, soft-touch dash material that looks and feels far more premium. And in the back, where every prospective Countryman buyer will be heading first, it's genuinely impressive. There's real head and legroom, and the rear seats can be adjusted back and forth to create more space in the boot as required.

Mini's first four-door will be offered as either a four-seater, with these two adjustable rears and masses of elbow room, or as a slightly more practical five seater - bit more of a squeeze, but spacious nonetheless. If you plump for the four-seater, however, you get a central rail that runs from front to rear of the cabin, onto which you can clip any number of functional aftermarket options like a storage box, armrest or iPod holder. Mini is also running a competition where punters are challenged to design an accessory to clip onto the centre rail, and the top three ideas will be put into series production. If you fancy a stab at this go to minispace.com for more details. We're currently patenting a clip-on Keira Knightley. Journeys will fly by.

A professional declaration needs to be made here. So early was TopGear's access to the Countryman that Mini HQ wouldn't let us drive it on the road. Our car, a top-spec 184bhp 1.6-litre Cooper S, was production standard, but for Our Eyes Only and as such we can't tell you with any certainty how well it will cope with stuff like motorway cruising or our crummy, crumbling B-roads. But the handling circuit on which we could drive the car divulged quite a lot, and all of it good. The Countryman does drive like a Mini should, with its transverse engine keeping the weight well behind the front wheels, making the nose lively and responsive to steering input. And despite a 10mm increase in ride height there is a conspicuous absence of body roll in tight, fast corners.

And a potential boon for the Cooper S, and Cooper D alongside it, is the option of Mini's ‘All4' four-wheel-drive system. The Countryman remains in essence a front-wheel-drive car, but with this £1,220 add-on it will send up to 100 per cent of drive to the rear wheels as and when traction is lost. The system works as both safety feature and performance tool, providing excellent levels of grip and go in conjunction with Mini's suitably non-invasive traction control.

A proper drive across a back road will be a better test of the company's claims that the Countryman is genuinely as capable as its excellent two-door offering, but until that time the signs look good.

The semi-SUV status of the Countryman seems a bit contrived, however. Marginally more ride height, a meatier kerbside presence and the option of a loose interpretation of four-wheel drive on the most expensive models does not add up to the basic assertion, one you can be sure will be made by many a proud owner, that this is ‘the 4x4 Mini'. It's not. And at £16,000 basic, rising to £22,030 for the all-singing Cooper S, it's not a cheap car either, however you choose to define it.

But as lifestyle statements go, the Countryman is an attractive package. It's genuinely practical, seems thus far to be a good drive, is a highly desirable product in what is arguably a rather indifferent segment of the market, and should hold onto its value better than many of its less exciting rivals. Image conscious suburbanites, ones with new families and cash to burn, are bound to flock to the Countryman. Expect to see hundreds parked outside gastro pubs for sunny Sunday lunches, the rear seats littered with boutique baby toys and old copies of Vogue. This is a car that embraces your middle age while at the same time keeping it at a comfortable distance. Irritating artifice to some, the definitive solution to others.