£ 99,950 when new
Oliver Marriage
Published: 30 May 2012
comments
Skip 1 photos in the image carousel and continue reading 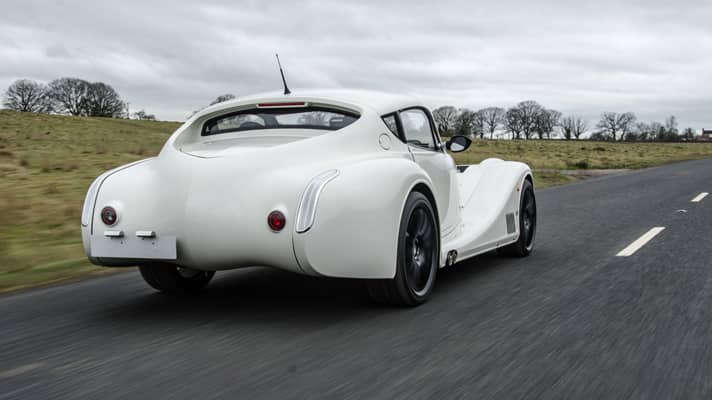 When did Morgans get so expensive? Since the demise of the £70,000 Aero 8 roadster last year, this new coupe is the cheapest of the Aero range. Well, I say range, but it's just this and the Aero Supersports. Anyway, that's not the point I'm trying to make here, which is that the base version, this Aero Coupe, costs £50 short of six figures.

Admittedly, this is £25,000 less than the Supersports convertible that it's based on. In fact, pretty much identical to, as the bodywork changes amount to nothing more than a solid roof. Matt Humphries, Morgan's chief designer, freely admits that the Aero Coupe wasn't his toughest job.

Still, it's a very dramatic thing to look at and that alone goes some way towards justifying the price. Underneath there's even less to separate the two. In common with the Plus 8, the Aero Coupe uses the increasingly familiar aluminium chassis mated to a BMW-sourced 4.8-litre V8 with a choice of either six-speed manual or auto 'boxes. This familiarity highlights just how far Morgan has come since the first Aero appeared over a decade ago.

Fit and finish have moved on massively, so you no longer have to make allowances for the Aero when comparing it to modern rivals. Well, not too many. Bulky steering wheel aside, the cabin is
a lovely, if quirky, place to spend time. It's small (unlike the massive boot), so you haven't got much room to stretch out, but it's beautifully trimmed and surprisingly free from noise. Yes, the column stalks are last-gen BMW, and I'm sure I've seen the air vents somewhere else, too, but the rest of it is just plain endearing. Especially the view forward over the long bonnet.

Mate this to the V8's relaxed, high torque delivery and the suspension's surprising suppleness and you have a car that laps up distance with nonchalant ease and makes you feel good while doing so. Yet it also charges at bends with gusto.

OK, so you wouldn't want to try keeping up with a 911, but you don't have to fling it around to have fun in the Aero. And since it weighs under 1,200kg and the V8 produces 390bhp (or 368bhp if you fail to tick the sports-exhaust option), it's not slow. But don't forget this is primarily a GT, and prefers to be driven and treated as such. Need guidance on that? Think Bentley, with a touch of caddishness.