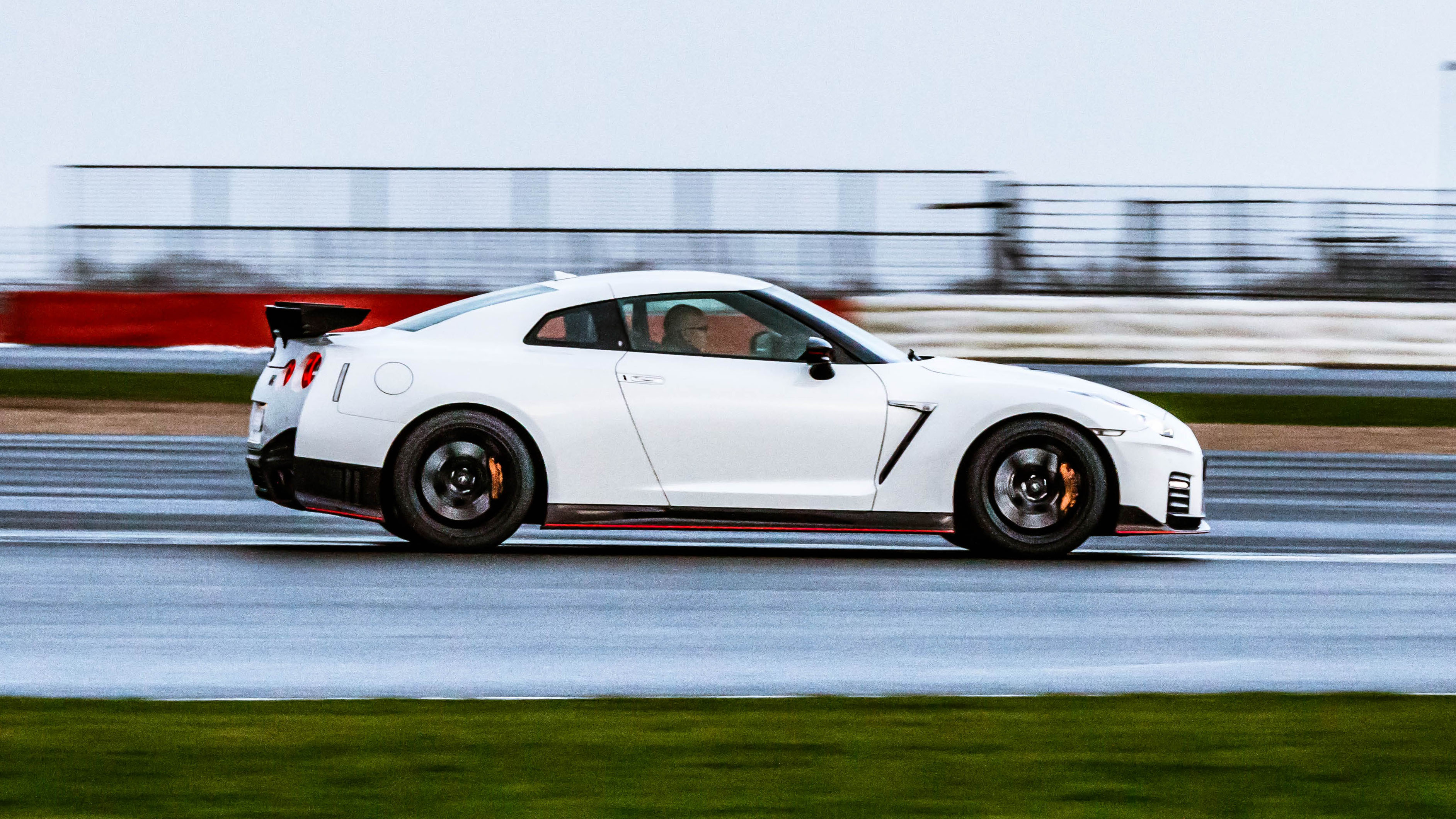 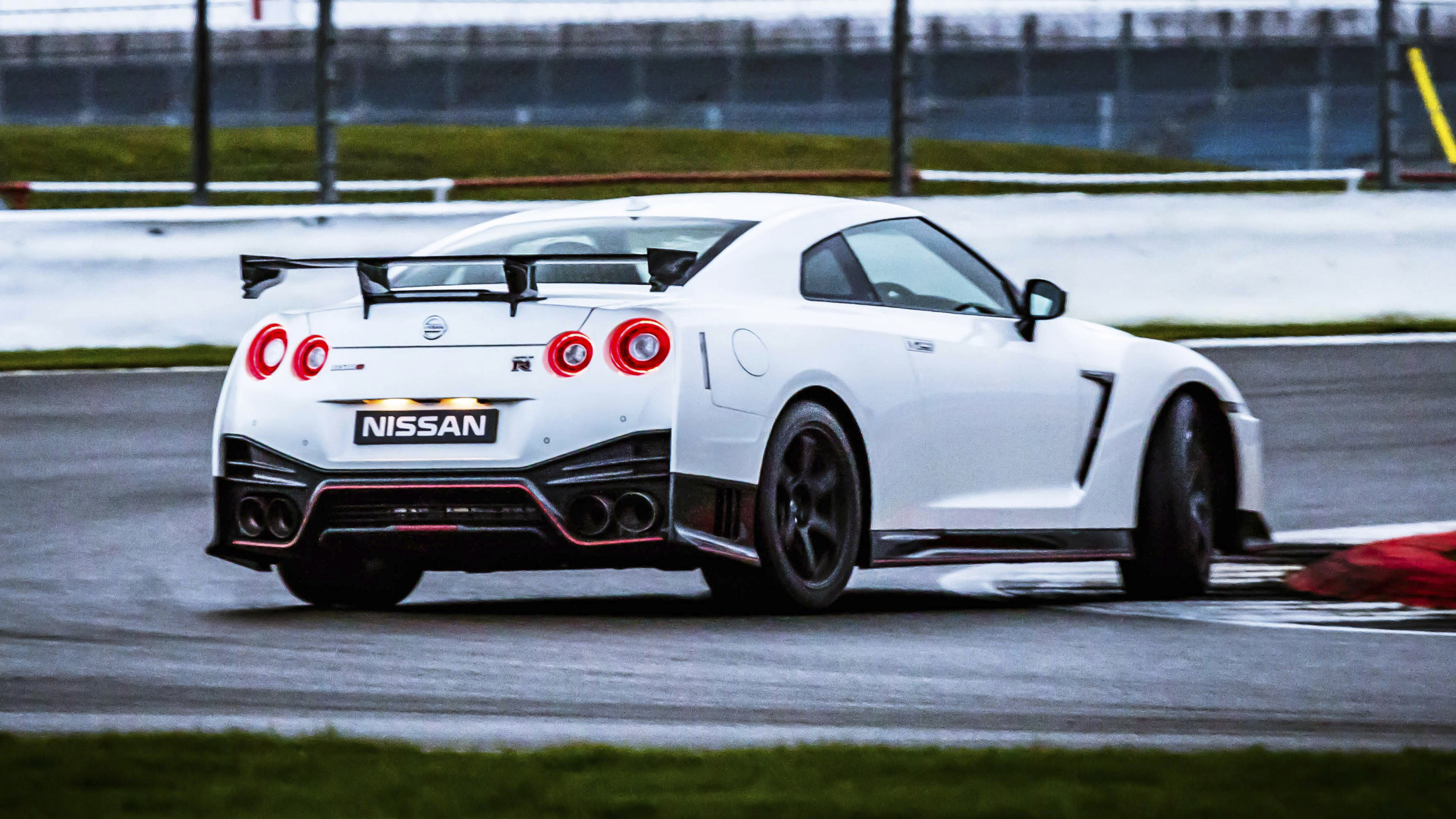 No. This one’s a Nismo, not a Nissan. A product of Nissan’s performance and racing department, not the mass market road car division. You’re the internet, therefore you understand this difference already, although I have to say I’m constantly surprised that any GT-R falls under the remit of the same bunch that’s also responsible for the Pulsar, X-Trail and Qashqai.

Correct. Founded in 1984, it’s the in-house outfit responsible for taking the GT-R GT racing, both domestically and internationally, and a couple of years back it had a stab at a full-house LMP1 car (the ill-fated, soon swept under the carpet GT-R LM). It does parts for the Juke. It does aftermarket bits, too. And it created this car. It’s not the first R35 Nismo GT-R, of course, merely a replacement for the existing model, but Nismo likes to keep itself busy.

Well, let’s start by giving you some idea of how Nissan goes about altering the GT-R. Most firms – including Nissan actually – have a seven or eight year model cycle for their cars with a good freshen up halfway through, but for the GT-R that goes out the window. Instead of one good refresh, we get lots of little ones – something new every year. A fractional tweak here, a gentle massage there, all of them conspiring to nudge the GT-R along and keep it fresh and modern.

The GT-R's project leaders are given autonomy, so as it’s aged and progressed through these facelifts, the R35 has sometimes been more sporting, sometimes more GT-ish. The latest version got an extra 20bhp, but also a smoother ride, more refined gearbox and much cleaner cabin design. It’s now a very acceptable daily road car, that also has a handy sideline in monstering tarmac and defying everything Professor Brian Cox holds dear.

Even at low speed there’s an energy to the Nismo, a sense that it wants to change direction

So the new Nismo goes to the other extreme?

Hold your horses, because there’s a halfway stage between Nissan GT-R and Nismo GT-R: the Track Edition. Still a Nissan, but here Nismo sprinkles it with a few trinkets, which this time round, included special body bonding, with adhesive as well as welds holding the metalwork together, increasing chassis stiffness by literally some per cent. And that, you’d think, might be that: £79,995 base car or £91,995 Track Edition. Seems like a fair mark up, and in the way they drive and the clientele they appeal to, there’s a fair gulf between them.

But within Nissan, Nismo enjoys an almost mythical position, and its whims are indulged. No-one pokes about and says “why do you need another hardcore track model?”.

So that’s what the Nismo GT-R is?

Correct. Over and above its siblings, the Nismo GT-R equips the VR38DETT 3.8-litre V6 with the turbos from the GT500 racer, giving a total of 592bhp, a 30bhp lift. It used to be 50bhp more, but the Nismo engine hasn’t changed this generation (the last one had 592bhp as well), while the Nissan engine has.

The suspension is the same as the Track Edition’s, but further toughened (a claimed two per cent faster through Nissan’s own slalom test), and then the whole thing is slathered in carbon. And not just the bits you can tell are carbon already. The entire front and rear bumpers are carbon (shortening the car by 20mm), as is the rear bootlid. Inside there’s lashings of alcantara and a cracking pair of Recaros. So welcome, then, to Nissan’s fastest, most focused, most fearsome road car. Only it isn’t. 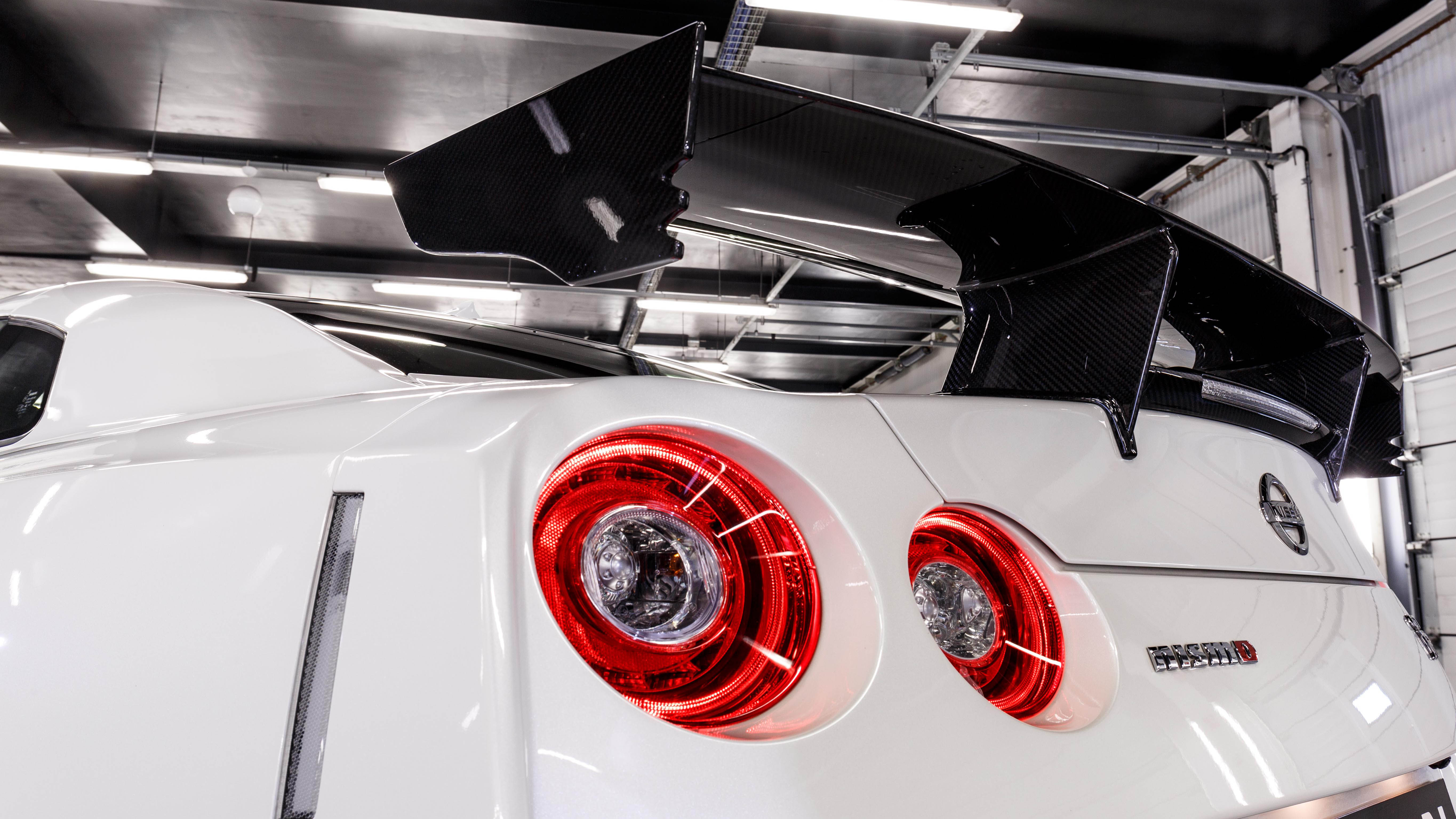 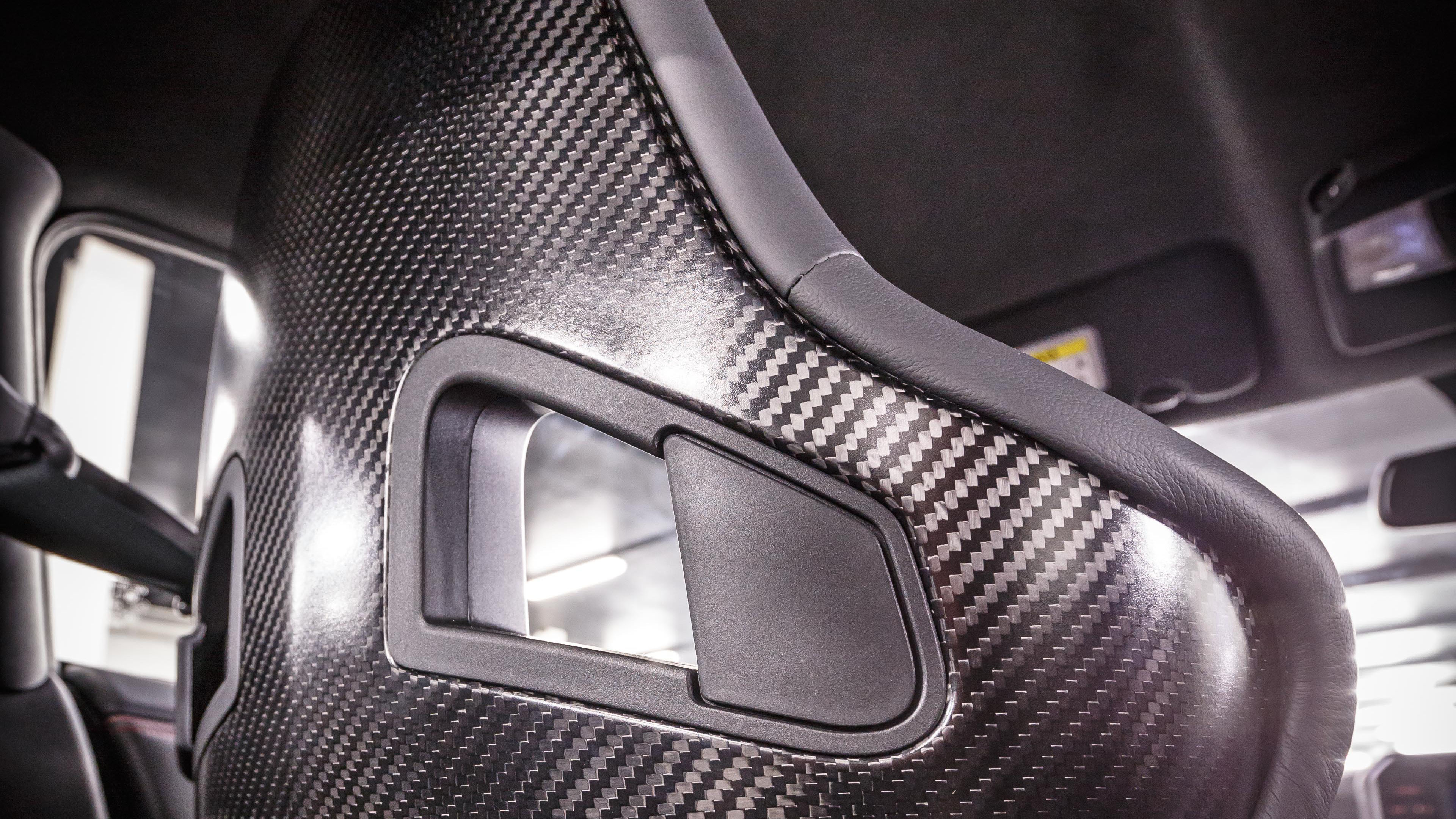 What do you mean? This is the car that set the 7min 8sec lap of the Nurburgring, isn’t it?

No. If you want that car, you have to add the N-Attack pack. That pushes the rear wing higher into the air on taller stanchions, replaces metal front wings and rear bulkhead with carbonfibre and adds a gurney flap to the bootlid. Overall downforce is three times the standard car and weight reduction strategy includes the loss of the rear seats. Then, and only then, have you reached maximum GT-R.

This one is just an ordinary Nismo GT-R and despite the carbon bumpers, lightweight wheels and so on, it’s only 27kg lighter than the softest version. But weight is something this car has always managed to defy – even at low speed there’s an energy to the Nismo, a sense that it wants to change direction. It doesn’t come from the engine, which is pretty lazy low down, but the steering and suspension, both of which are so positive and engaging.

Instantly different to the standard car then?

Instantly. In the bullishness of its damping and immediacy of the steering it does feel like a motorsports special. However, while we’re at a racetrack (Silverstone), the conditions aren’t ideal (it’s 3 degrees Celsius and the surface is wet), and what the Dunlop SP Sport 600s can’t do is find any grip. What. So. Ever. The relationship between polished surface and tyres is practically frictionless.

Initially the Nismo feels hilariously spiky, snapping broadside at every throttle prod as the jolt of torque hits the back wheels. It is very rear-biased in Race mode, which can be intimidating, but there’s a switch on the dash that helps control torque split. Slowing it down properly before corners isn’t an issue as the brakes – even though they’re not carbon ceramics – are mighty, but carry too much speed in and I either get massive oversteer or massive understeer. And once sliding, it takes time and distance to get back under control – it’s the only time you notice the weight working against you.

When you’re not over-driving it, you realise what sort of car the Nismo is – a beautifully tactile, feelsome sports car that’s more competent than you are

There are two methods of dealing with this: get busy with the controls or trust the car to sort it out in the first place. Go for option two. Option one just makes matters worse as you and the car both try to correct the initial issue and end up causing others. Instead calm down, keep the steering angle you want, feed the power in and let the diffs work the rest of it out. Suddenly, when you’re not over-driving it, you realise what sort of car the Nismo is – a beautifully tactile, feelsome sports car that’s more competent than you are and deals with speed and traction at a higher level of understanding.

It is deeply fast, but not as energetic as rivals weighing 200kg less and the engine, for all its might, isn’t the most lag-free or exotic sounding. It does pull healthily all the way to the far side, though – a nice crescendo delivery all the way to 7,000rpm.

But you’d still have it wouldn’t you?

Look, the GT-R occupies a much envied position for three reasons – ability, value and it’s anti-establishment image. But here’s one that’s costs more than a McLaren 570S, Audi R8 V10 Plus or the GT R built by AMG. You can read about that here, and you should, to see what a mere £31,750 price hoist over a GT S gets you on the AMG, and what it doesn’t get you here.

But none of them are rivals...

OK, this or a GT3 RS? That’s cheaper, too (although not second-hand). For me it’s a no-brainer. I do love the GT-R, its attitude, the constant honing and fettling, but at this price, for relatively modest upgrades, I’m not convinced. As time has gone on the Nismo has got more sense of its own value and status, and that’s undermining it’s giant-slayer reputation, the price a distraction from the car’s capability. Put simply, it feels like some cynicism has crept in. And that’s not what the GT-R is about.

Leaving price aside? It’s still a phenomenal car, the balance in the chassis is fabulous, it’s adjustable and confidence-inspiring and is intoxicating on a circuit for its focus and ferocity. Ignore anyone who says this is the supercar that does it all for you – in this day and age, where everything is pebble-polished, this is actually one of the most mechanical, communicative cars around.