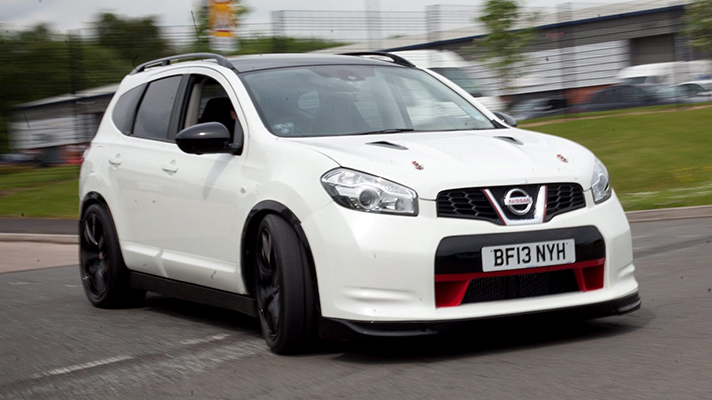 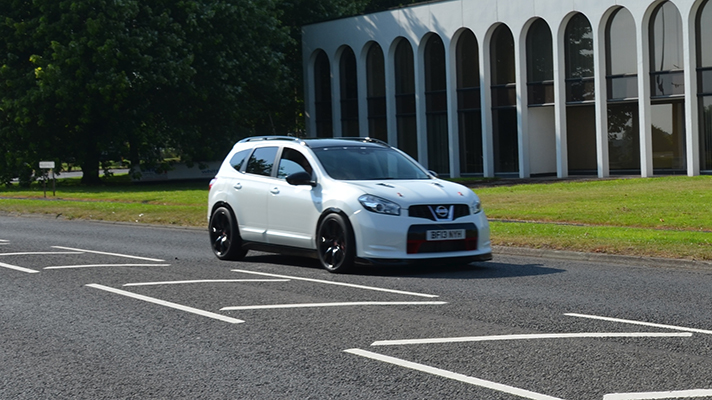 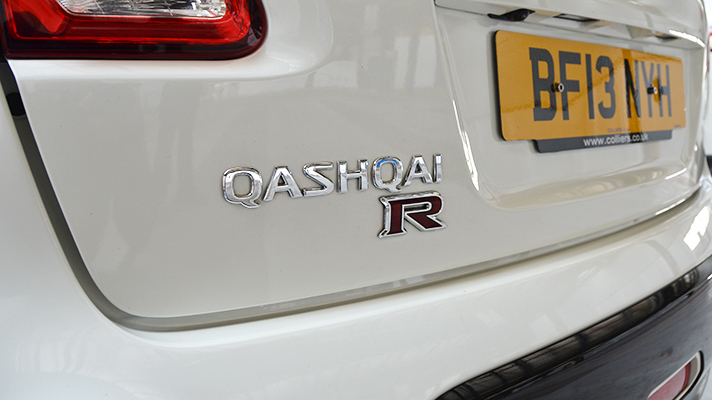 'That', is a Nissan Qashqai. Formerly one of the UK's best-selling cars, believe it or not. A humble Japanese SUV with good road comfort, an economical range of engines, great visibility over the...

OK. This was one of the UK's best-selling cars. It has since morphed into an agent of the apocalypse; a machine of destruction built to humiliate things many times more expensive.

It is, in short, a Nissan Qashqai with a tuned GT-R engine that produces 1100bhp and nearly as many torques. Let that sink in for a moment, and come back to us when you're ready.

It's the brainchild of Severn Valley Motorsport, a specialist R35 GT-R tuning company working out of a low-key industrial estate in Telford. SVM saw all the hype surrounding Nissan's very own GT-R-engined Frankenstein - the Juke-R - and wanted to do something similar... but on a slightly more ambitious scale.

Using a much more advanced version of Top Gear maths, the team discovered that the length of the old Qashqai and the GT-R was, give or take a few millimetres, near enough identical. A plan was formed: they would take a standard GT-R and a standard Qashqai, and the two would form a most unholy union of power and deception.

How did they do it?

The Qashqai+2 was mercilessly gutted to its bare shell, around which a jig was built to hold the body in place so nothing moved out of shape. This was then set to one side to marinade.

Step forward a standard MY12 GT-R. The team had no qualms about hacking ‘Godzilla' to pieces, ripping off the body but keeping the drivetrain and chassis - basically the entire floorpan - intact.

Then, after many inventive swear words, some bludgeoned fingers and herculean quantities of tea, the Qashqai R was birthed: the ‘Qai's shell was carefully lowered into position on top of the GT-R's floorpan, and the two were matched shut.

I'm guessing they didn't stop there.

So much more, in fact, that it produces a nice, round 1100bhp. Or perhaps even more.

The 3.8-litre V6 was bored out to 4.1-litres, forged pistons and rods capable of handling 1300bhp were fitted, the whole lot was balanced and treated to SVM cylinder heads, bigger SVM turbos with bigger compressor pipes, high-flow intake pipes, a cat-less stainless steel exhaust, better cooling, motorsport injectors with Veyron fuel pumps, a modified clutch and diff brace, carbon brakes with braided brake lines all round, KW coilover suspension with Eibach anti-roll bars front and rear, new electronics, 20in alloys, and the full interior from the R35 GT-R. Oh, and some Bose audio.

Nissan's own Juke R hits 0-62mph in 3.4 seconds and runs a quarter mile in 12, and we all thought that was quick. A McLaren P1 is only a tenth quicker on the quarter mile straight.

Scary. No, scratch that, terrifying. Not because you think it'll all fall to pieces - far from it actually. It feels thoroughly well put together and engineered, like a factory fit job. Everything has been bolted perfectly into place, and there are no squeaks or rattles about the cabin.

No, the terror comes from the acceleration. On a stretch of private land, we had a brief opportunity to experience this, and sweet mother of the almighty, it not only takes your breath away, but actually hurts. Feed the power in gently, and you're rewarded with one socking great surge of acceleration that just never wants to stop. Ever. Punt it from anywhere in the rev range and - giving the turbos a moment to draw breath - it kicks you in your kidneys, not so much launching you down the road as firing you into orbit.

SVM has also programmed a feature which holds the engine's revs while you're driving to build boost. Then, while flooring the accelerator, you press the button, the turbos are unleashed and the world rushes backwards in one fell swoop.

It's probably undriveable in town situations?

Hardly. Aside from the boomy exhaust and GT-R interior, this Qashqai is as docile as a sedated tiger. No transmission bumps, the ride isn't rock hard (it's firm, with a degree of suppleness), the steering is hefty but accurate and visibility is good. It's a Qashqai, after all. Though because it robs the GT-R's interior, there is only space for four, and even then it's not spacious in the back. But really, who cares? The very definition of a window-licking lunatic dressed in sheep's clothing. Or something.

And so you should. We don't normally do tuner cars here on TG, but this one is different. We're still a little scared of it, but Severn Valley Motorsport would be more than happy to do you one if you so desire. Price on application.