£65,784 when new
Read why you can trust our independent reviews 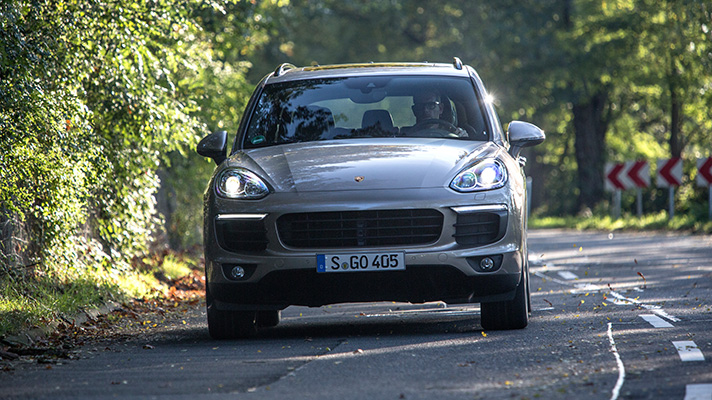 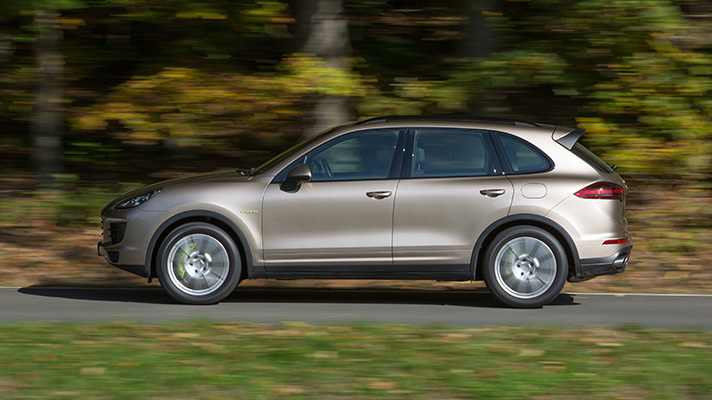 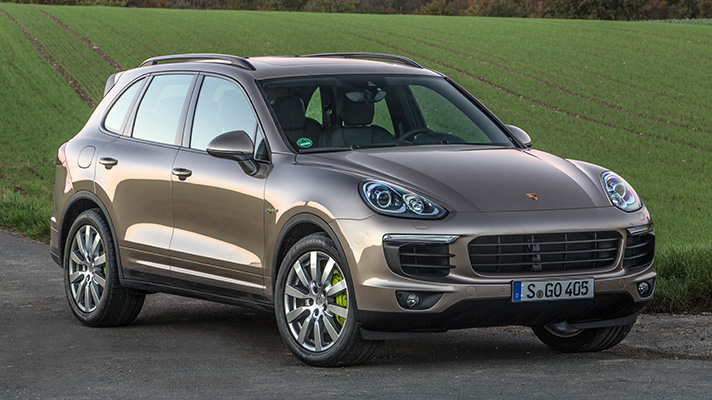 Oh yes. Porsche now has the largest range of plug-in hybrids of any car manufacturer. Imagine being told that at the turn of the century, when the only big decision in a Porsche showroom was whether your flat-six petrol engine sat in the middle or over the rear axle.

The Cayenne S E-Hybrid joins the identically suffixed Panamera and the 918 Spyder in Porsche's tax-free triumvirate of congestion charge-busters. There's been a hybrid Cayenne before it, but not one you could connect to the mains to extend its electric-only potential.

So what does that mean?

In Porsche's claimed figures, this is a car much greener than the one it supersedes. The old Cayenne Hybrid S gulped 34.4mpg of petrol while emitting a hot hatch-like 193g/km of CO2. This new S E-Hybrid, which is introduced as the Cayenne range gets a nip'n'tuck, comparatively sips fuel at 83mpg while its 79g/km emissions match a hybrid Yaris. Claimed figures, remember - in the real world you won't get close to that.

I'm guessing it's no lightweight?

Again correct. The E-Hybrid's battery, additional cooling and voltage lines add 270kg to a comparative Cayenne, snaring it a 2425kg kerb weight. It remains large and imposing in the metal, too.

Its combination of supercharged V6 petrol engine (the same 328bhp unit as the Audi S4) and electric motor results in a combined 410bhp and 435lb ft. While the old Cayenne Hybrid S used a similar box of bits, this new car ups power by 30bhp and consequently chops the 0-62mph time, which is just a tenth behind the Boxster, at 5.9 seconds.

It's the same drivetrain as the hybrid Panamera, albeit driving all four wheels rather than just the rears, while the battery has been pumped up a little too, helping counteract the Cayenne's bigger size and weight.

So what's new under the skin?

The lithium-ion battery is much more potent than the old hybrid Cayenne's, uprated from 1.7 to 10.8kWh. That enables electric-only driving for up to 22 miles. The electric motor has more than doubled in power, too, now producing 94bhp.

The battery sits under the boot floor, robbing you of the chance to spec a spare wheel, but helping distribute all that weight and keep it as low as feasibly possible. A full charge at a regular mains socket takes around four hours (it'll be much quicker at a fast-charging point), but if the petrol engine kicks into life, chances are you'll keep the battery topped up on the move anyway.

There are plenty of variations of drive mode, the key ones being E-Power (electric only), hybrid (where both powertrains work in harmony) and E-Charge, where surplus power is harvested to feed the battery. A Sport mode (and an accompanying stonk of your right foot) brings everything together for maximum power.

The most interesting stuff takes place in town. Turn the key and it's easy to think you've not clicked the ignition all the way, as you're greeted by silence. Shift the eight-speed Tiptronic auto into Drive (still no super-snappy double-clutch PDK on the Cayenne) and the hush continues.

The lack of aural drama is somewhat incongruous to the bulky proportions, but the Cayenne easily maintains electric-only propulsion through town and is brisk enough as it does so. In cities, where it's easy to envisage a lot of these ending up, the appeal of swishing silently through traffic - and to the priority parking often afforded to plug-in vehicles - is obvious.

The electric-only top speed is 78mph, and there's a pressure point halfway through the throttle's travel that, when pushed, brings the petrol engine into life a little uncouthly. It's a great engine, and it doesn't sound too shabby, but the sudden arrival of high-revs drama can be unsubtle at times.

Enough of the town stuff. It's a Porsche. It must be sporty?

In the Macan and Cayenne, Porsche sells the best handling SUVs by a good stretch. This S E-Hybrid, though, doesn't quite earn the same badge of honour. While the Cayenne GTS shrugs off its bulk and handles uncannily like a fat hot hatch, its more parsimonious sibling can't replicate that.

You feels its extra weight as you brake into and negotiate tight turns and it's best to abandon ideas of really hustling the thing and settle on a smooth flow through corners. The steering isn't as nice as that on other Cayennes, being an electric setup (the only way for the steering system to still function in E-mode), while the Tiptronic gearbox can't help but feel a little tardy in its manual paddle-shifts compared to the fancy twin-clutch PDK that populates most other Porsches now. The energy recuperation under braking is very handy for keeping the battery topped up on the move, but it also robs the driver of natural brake feel.

Its composed and comfortable, though, and good enough to justify itself if you really want a hybrid. But it's not good enough to outdo any of its relations. It's a Porsche for those who don't prioritise driving satisfaction.

With an 11 per cent BIK rate, there ought to be big appeal for company car drivers. And anyone who can regularly plug their Cayenne into the wall - while rarely heading on journeys well beyond its electric range - will utilise its technology best.

At £61,474, this Cayenne is nearly £30,000 cheaper than the Panamera S E-Hybrid, which makes it look stonking value. But it also costs exactly the same as the Cayenne S Diesel. In real-world driving, the diesel's mpg won't be much behind the E-Hybrid (in which we averaged 34mpg), and with 627lb ft of torque on tap, it's a Cayenne that's still ballistic to drive, and therefore our pick of the two.