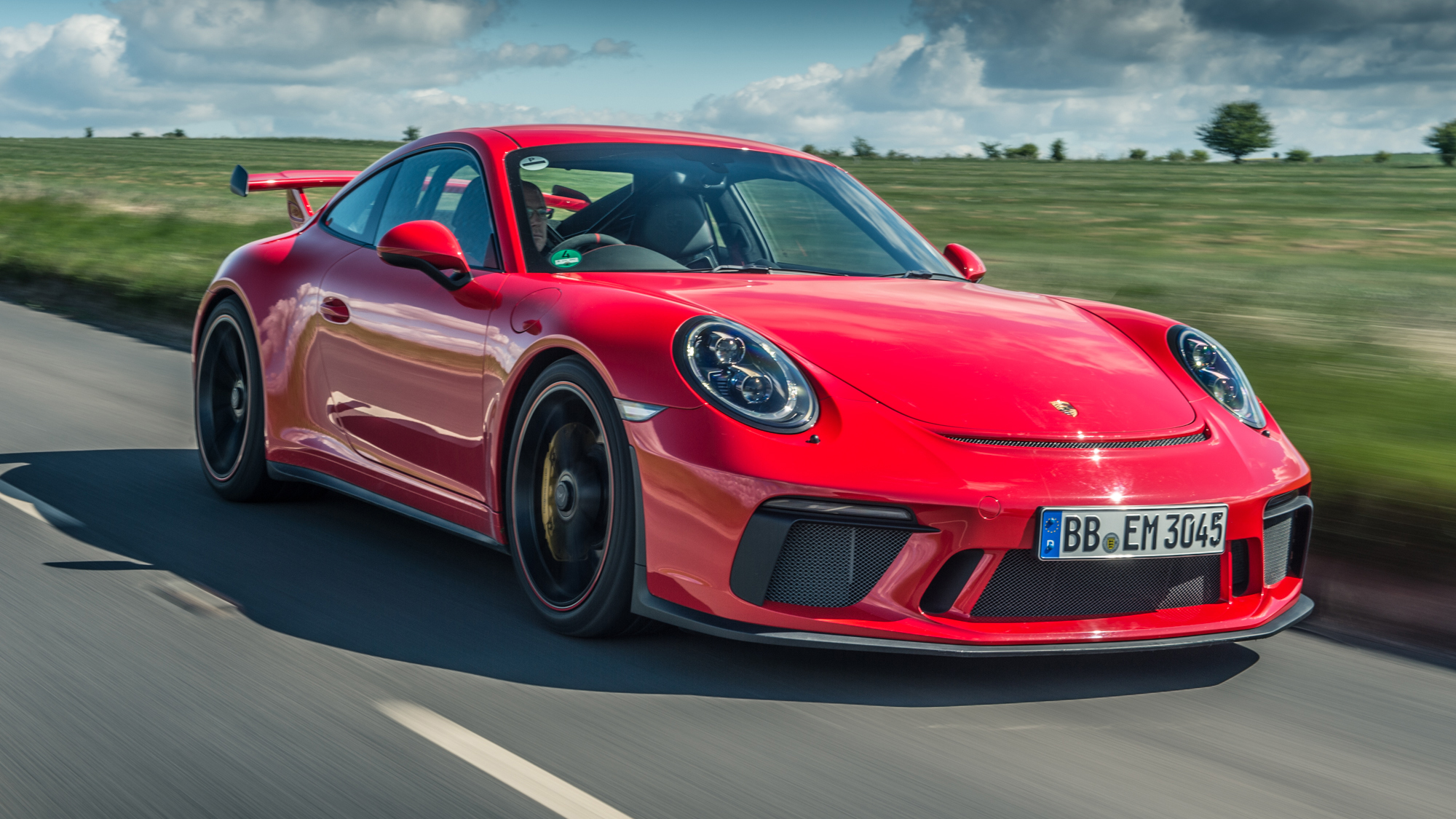 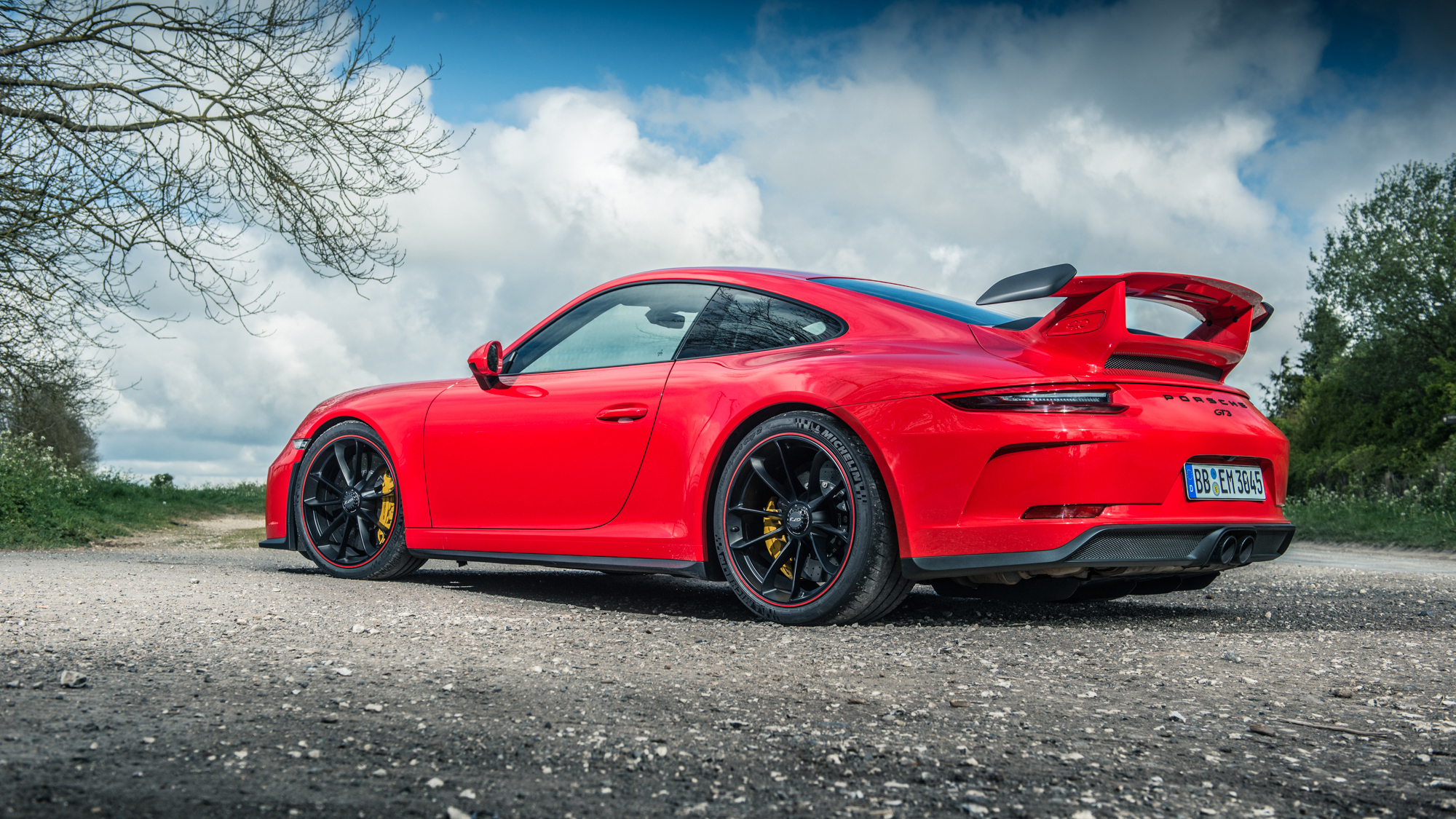 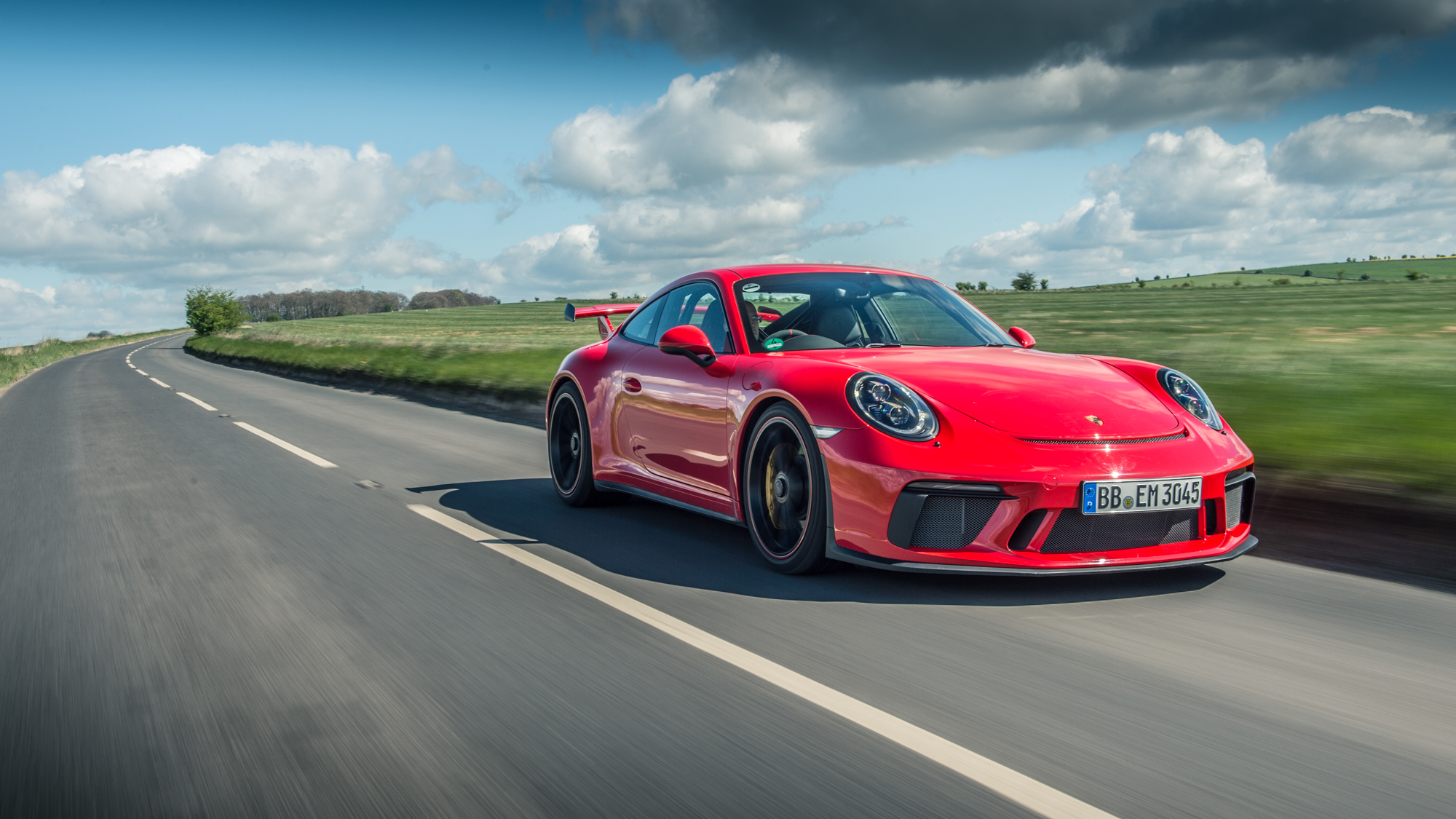 Besides the famous reintroduction of the manual gearbox? Well, you’re potentially asking the wrong question. A better one would be: how does this differ from the GT3 RS? Because what we have here is a 911 GT3 that’s replaced its 3.8-litre flat six with a 4.0-litre and gained rear-wheel steering. OK, it does without the magnesium roof, the wider turbo body and vents over the front wheels to improve downforce, but it’s only 10kg heavier and has the same 493bhp and 339lb ft outputs.

It’s the same engine as the GT3 RS, then?

What is true is that like the gen 1 991 GT3, this one revs to 9,000rpm, 200rpm beyond the RS. So the internals are new, lowering friction and operating temperatures, and enabling that lofty rev peak.

OK, but what about the manual gearbox?

Can’t tell you. This one’s a PDK. I know, I know, we were as frustrated by that as you are, but this was the first right hand drive car Porsche could get to the UK, so we had no choice.

However, I already know the six-speed manual from the 911R. So I can tell you it’s got a short, sweet shift and that even though I haven’t driven it yet, if I was buying a GT3, I’d have mine with the manual and be happy that I’d made the wrong choice.

Look, I’m delighted that Porsche has had the guts to back down and give purists what they want. But I also know just how good PDK has become and just how well it works with this engine. I’d have the manual not because, in time, it might be the more collectable one, but because of the extra interactivity it offers. The fact it slows you down and makes you concentrate more.

And despite being 17kg lighter, it is slower. Spec the manual and the 0-62mph rises from 3.4secs to 3.9 (although the top speed actually climbs 1mph to 199mph).

And how is it with the PDK?

Stunning. I think this might now be the very best of all the twin clutch boxes. Pull a paddle and it's zero-shift, instant response. So getting the best out of this engine is simple. And that shouldn’t be overlooked, because a GT3 caught off guard and out of its operating rev band isn’t that responsive.

No turbos remember? But if you’re caught in a high gear at low revs, just pull and hold the left paddle and it’ll select the lowest gear for your road speed that it can. In the manual it’ll take much longer to dig yourself out of trouble.

But either way, oh-my-God-the-engine. You forget what it’s like when a feral flat six goes stratospheric, soars past 7,000rpm and enters a world beyond the realm of turbos. It’s tremendous. 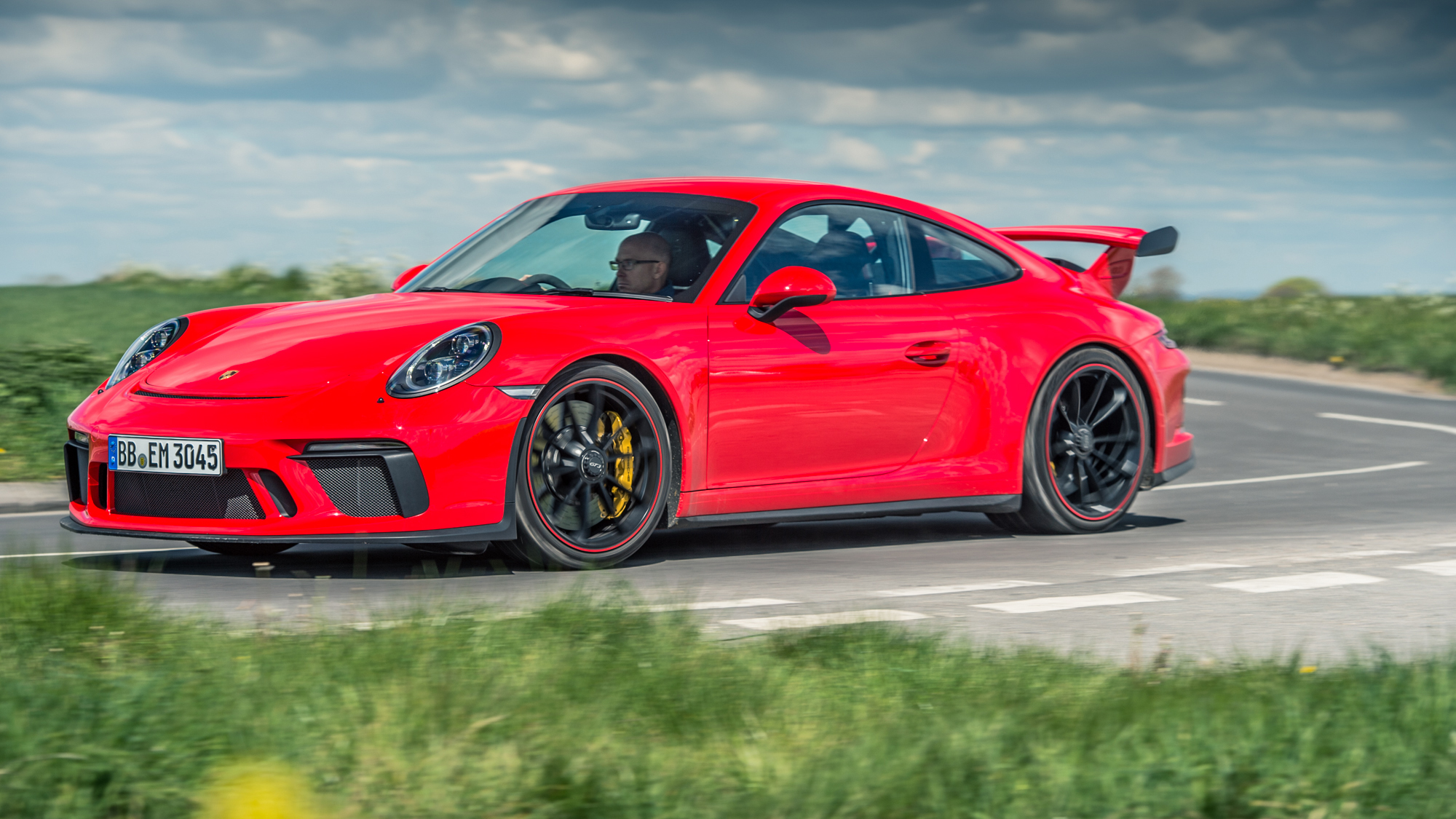 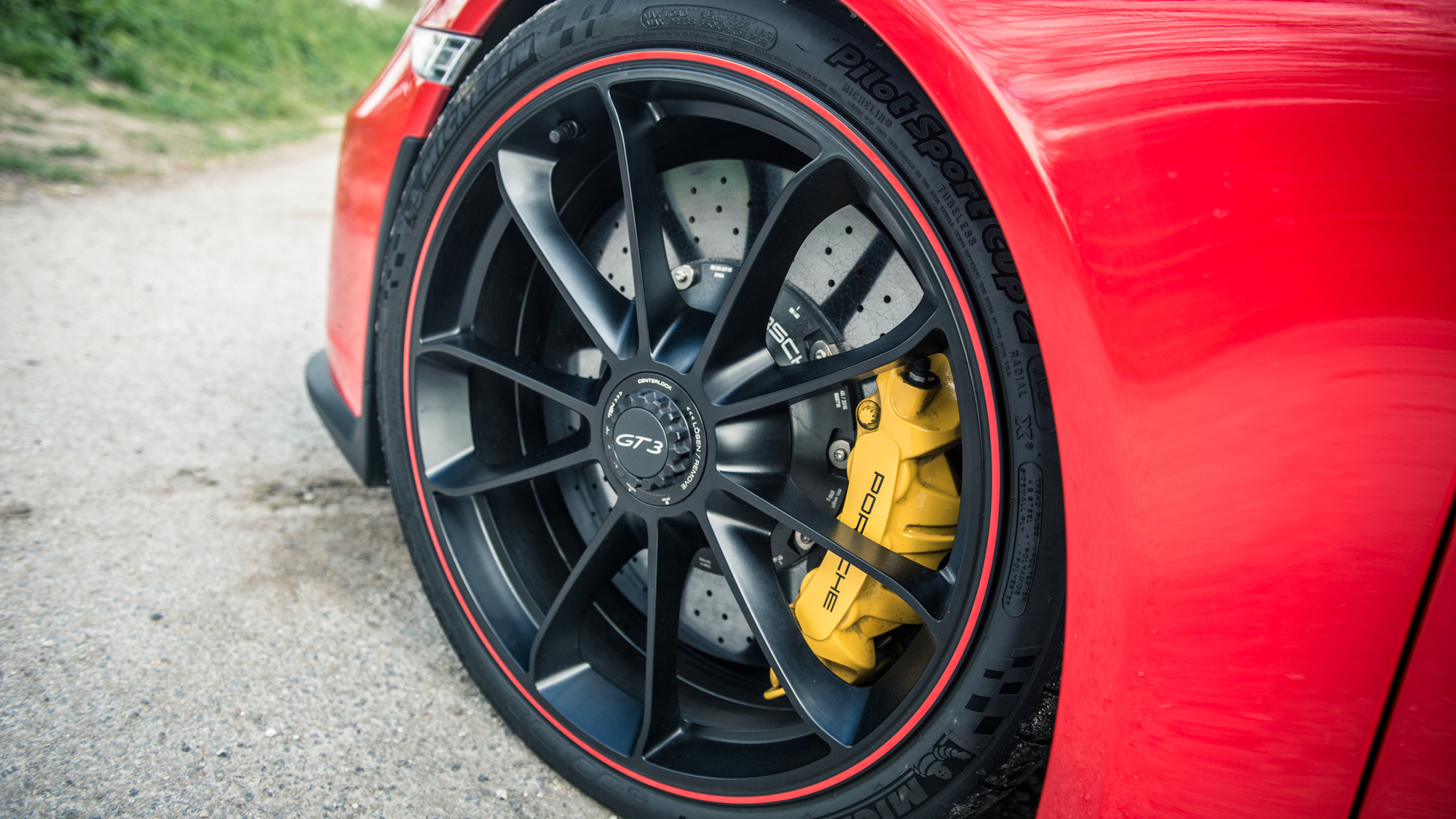 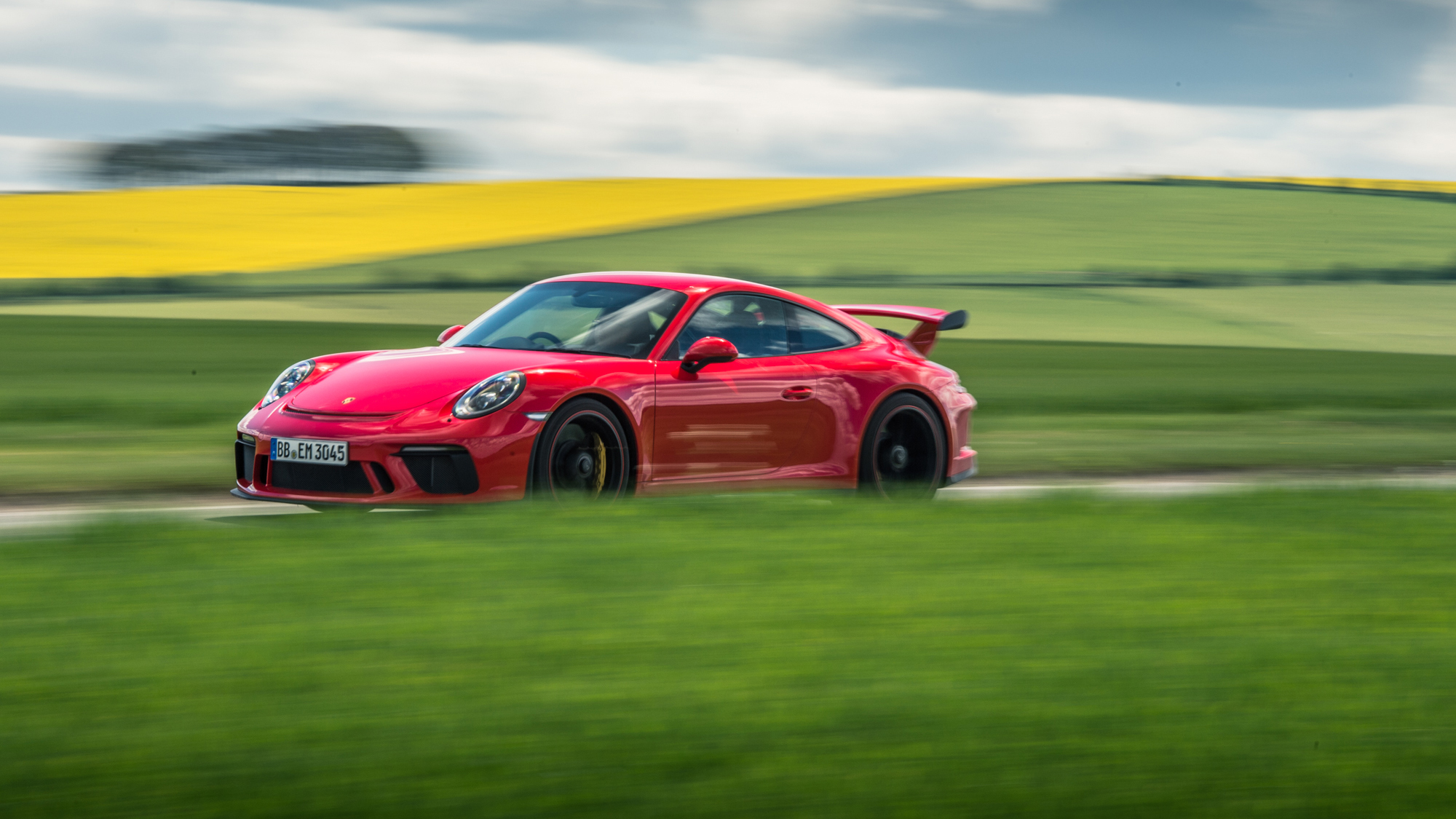 Thickly muscular low down, then strident through the mid-range, which develops into this yelping, screaming top end. The first time I accelerated hard in the new GT3 it actually shocked me with how hard it hit. The noise is penetrating – it makes little difference whether you enable the sports exhaust or not – and there’s this fabulous way the engine note brightens and hardens as the acceleration builds to a punishing crescendo. It’s transcendental, taking on a life of its own.

When the 991 GT3 first appeared four years ago I remember writing that it was so special, yet usable, that I’d happily have it as my daily 911. As the rest of the range has moved to turbocharging, that’s even more the case now. Maybe I would want the PDK then – the more I think about it, the tougher the gearbox choice becomes. Either way, the GT3 is now more distanced from the rest of the 911 range.

It’s outstanding. The damping is firm but so polished and communicative, the steering doesn’t wriggle and writhe quite as communicatively as of old, but by modern standards it’s stunning, and provides stability and information and confidence in abundance. So much so that you notice the front end just misses a fraction of turn-in bite at road speeds. I know that’ll be there on track, where you’ll have higher tyre temperatures and be able to trail brake to the apex, keeping weight on the nose – just what a rear-engined 911 loves.

The rear axle is mega. The drive is so prompt that it feels like there’s a rigid link from right foot to rubber and the behaviour as the speeds build is immaculate. Corners get zapped, the engine howls, the suspension dances – it’s all good. And it rides with such dexterity that, while you wouldn’t call it comfortable, you can say that you always move in sync with the car, so you’re not jiggled about inside, but instead move in time with it. Yep, you really could run one of these as your daily motor and not suffer.

Driving position perfection, if that isn’t too strong. This one came with the one-piece carbon bucket seats (£3,324) that hug hard, locking you in position. You’re sat low, your hands fall on to a perfect proportioned steering wheel (now the smaller diameter rim from the 918 Spyder). Everything feels so right.

And it’s so nice to look down at the centre console and have so few choices to make. Dampers on/off. Exhaust on/off. Gearbox sport mode on/off. That’s it. It means you have a natural, unadulterated car here, the one the engineers want you to drive, not the one the marketing department insists you have.

Sport dampers interfere with the ride more than help it, launch control – as you can see in the video below – is ridiculous. The £6,498 carbon ceramic brakes don’t fall into the trap of being over-servoed at the top of their travel, but are so good when you get some pressure into them.

What’s the conclusion then?

It feels small and light and narrow and hard and fast. You drive it and on a British B-road, wonder why almost everyone else gets it so wrong. You don’t need more speed than this and I’m not sure there are many cars that deliver more sensation. Certainly none at this money. For the ability and engineering on offer here, £111,802 is a bargain.