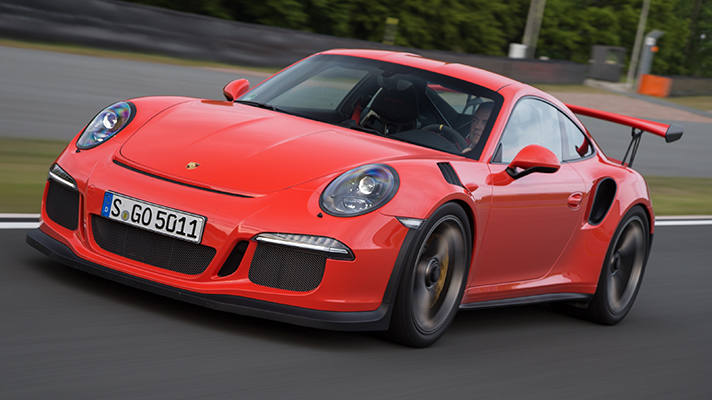 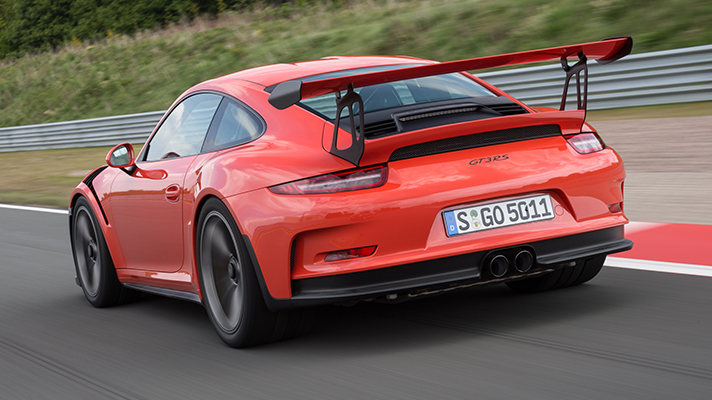 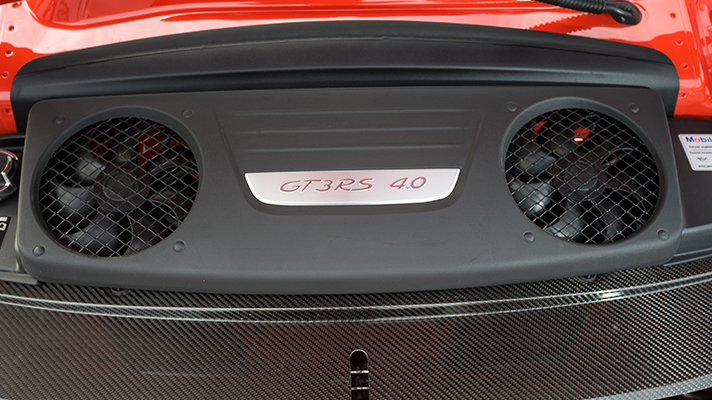 Well, if you're hoping to transport six people to the seaside or follow a mountain goat up an Alp, then yes, the GT3 RS is genuinely rubbish. But if you care about driving, however...

Come on, out with it

...it's properly full on. Senior. Major league stuff. But then you look at what's been done to the GT3 RS and it's hardly surprising. It has 80 per cent of the downforce of a GT3 Cup racing car, carbon body panels, placky windows, a magnesium roof (just to save 1.1kg high up on the car).

The GT3 RS has the wheels and tyres from the 918 Spyder, the same seats, steering wheel and brakes, too. It's adopted the Turbo body which yields two major benefits - wider tracks to aid grip and side air intakes which cause less turbulence and have more ram-air effect into the engine.

Gains, but not huge ones - and the engine actually revs 200rpm less. You don't notice. It's utterly spine-tingling right at the top end, not massively torquey low down, but above 5,000rpm it piles on speed, ripping round the last chunk of the dial.

Wind the window down and the induction noise from the rear arch intake is awesome. There are titanium conrods and the crankshaft is made from V361, a super-high purity steel that's remelted multiple times in a vacuum to remove impurities. It's also used in the 919 LMP1 car.

The whole car looks pretty wild. I've never seen a car with closer tyre clearances or wheels that pack out the arches in such a Hulk-like manner. Those tyres are 265s at the front and 325s at the rear - apparently getting them to fit was one of the project's biggest challenges.

The GT3 R looks utterly intent, dedicated to nothing other than dismantling treacherous racetracks with total focus and peerless disdain. And it now produces more downforce at 125mph than the last gen GT3 RS did at 186mph.

See those slats above the front the front wheels? They vent the high pressure air that builds up in the wheelarch, increasing front downforce and allowing the engineers to then give the rear wing more angle to balance things out.

I assume it feels pretty glued down, then?

It does. Match downforce with those fat front tyres and you've got a steely-eyed car with astonishing turn-in grip. It feels more locked on line than any other 911 I've driven. Any.

How is it on the road?

To start, you just have to accept that you will never, not in a month of Sundays, get close to the GT3 RS's limit on public roads. Never.

That's a slight disappointment - you always know that you're only scratching the surface of what it can do, but that's just encouragement to take it to a track to find out what happens beyond...

No, the real surprise is how little compromise the GT3 RS requires over the standard GT3. Maybe the polycarbonate rear windows let more noise through and the wider Turbo body does make it feel broad on narrow roads, but it rides tolerably, the engine is perfectly well mannered and the PDK gearbox happily hacks about.

For me, this makes the standard GT3 near perfect - it's the first Porsche Motorsport car that you really could happily use every day and indulge some of the GT magic on special occasions.

But, and I don't think this is just me, with the old GT3 RS I really enjoyed the compromises it forced on you. Yes, it had a manual gearbox, and that's a big part of it (pulling a paddle is only ever going to be charmless in comparison), but the fabled Mezger engine was chuntery and guttural and lumpy at low speed. It needed to warm itself thoroughly. It had charisma to spare. It felt like a proper racing car.

The new one? The sophisticated new drivetrain means it's lost a bit of that. Mechanical rawness has given way to a more controlled release of energy.

Such is the modern way, right?

It is, so I shouldn't bemoan what was never going to happen. And measured against modern standards the engine is stellar: instantly responsive, purposefully tuneful, gains volume and hardness and momentum as the revs rise. Just lacks the last degree of passion.

So let's move on to the track, because that's where the GT3 RS belongs. I totally don't object to this car having a PDK gearbox. It feels so well matched to the engine and the shifts are mesmerically good - 95 milliseconds, apparently - on the button every time, no lag.

And when a car is as fast as this, can pulverize corners so efficiently, it's better not to have to worry about third pedals and dog-leg shifts.

Remind me how fast it goes round the Nurburgring?

Under 7.20. ‘Under' because that time, set by Timo Glock on only his third lap out, was on a partially wet (not just damp, apparently) track.

I drove it at Bilster Burg. It's like a mini-Nurburgring, the sort of place that you struggle to believe people are allowed to design and build in this day and age. There are flying crests, massive compressions, tortuous cambers, tightening radii, flick-flacks, one blind faith cresting right hander that still had me swallowing my teeth on lap ten.

It's a sadistic place to launch a car. The GT3 RS was better around there than I was. Much better. So fast, so composed, so shockingly stable at high speed and utterly, totally wonderous under braking. It dismantled Bilsterburg, and in the process reminded me that a GT3 RS is a very serious driving device indeed.

You need to have your game face on if you want to go fast in it. You absolutely have to be confident, you can't show it any weakness.

Back out of the throttle mid-corner and the GT3 RS will move around, will punish your indecision with a slow exit and your heart in your mouth. Instead you need to trust it, trust the amazing front end grip, keep turning, stay on the throttle - then you have perfect balance and the RS fires out the far side, squatting heavily on that back axle, afterburners in full effect. I'm not sure much could stay with it.

Grip is colossal, and you can, once you get brave, play with the balance - small, carefully measured adjustments only though, please. It takes time to fully appreciate, but like all good cars, it's one that communicates brilliantly, and leaves you wanting more, makes you want to learn and improve. Doesn't suffer fools, though.

Are there any electronics involved in the chassis?

There's torque vectoring across the rear axle, PASM (Porsche Active Suspension Management) and four-wheel steering. It's the way these are so deftly integrated into the driving experience that's a real achievement.

The car moves so naturally, so predictably, and even though the steering doesn't have a tremendous amount of natural feel (only because I'm comparing it to the old 997-gen car), it's so good in other areas that you don't notice. You feel the forces come back from the front axle and those fat tyres, the weighting is spot-on, the gearing and even the smaller diameter of the 918-sourced steering wheel.

And the chassis never stops letting you know exactly what's going on. I don't think there's another company out there that spends more time or effort honing its dynamics to the last nth of a degree. It really does feel like all those little tiny changes - everything from the sticker-for-a-badge to the titanium conrods - have added up to a very, very complete package.

Is it fun then?

Hmm, tricky one. The Cayman GT4, well that's pure fun, but this one's so full-on, so grown up that it's a bit beyond easy-going entertainment. Massively rewarding, quite draining, with limits that are off the charts. Too much, maybe. After my first stint around Bilster Burg I got out of the car and had to have a stern word with myself. It's that sort of car.

I don't know where Porsche can take the GT3 RS from here - this feels like about the limit for a road car. And yes, I know a 918 is faster still, but it has a broader remit; it's a hybrid, a convertible, a piece of street theatre. The same applies to the drama and stridency of the 458 Speciale. But a GT3 RS - even one as visually striking as this one now is - has no fallback position. It's all about the driving.

And yes, the driving is very impressive - the 991 GT3 RS is undoubtedly the most secure, tied down, outrageously fast and agile 911 I've ever driven, but I can't help but think it's a bit of a shame you have to be going so fast to get your kicks. Hell of a thing, though. Properly full-on.