£160,610 when new
Read why you can trust our independent reviews 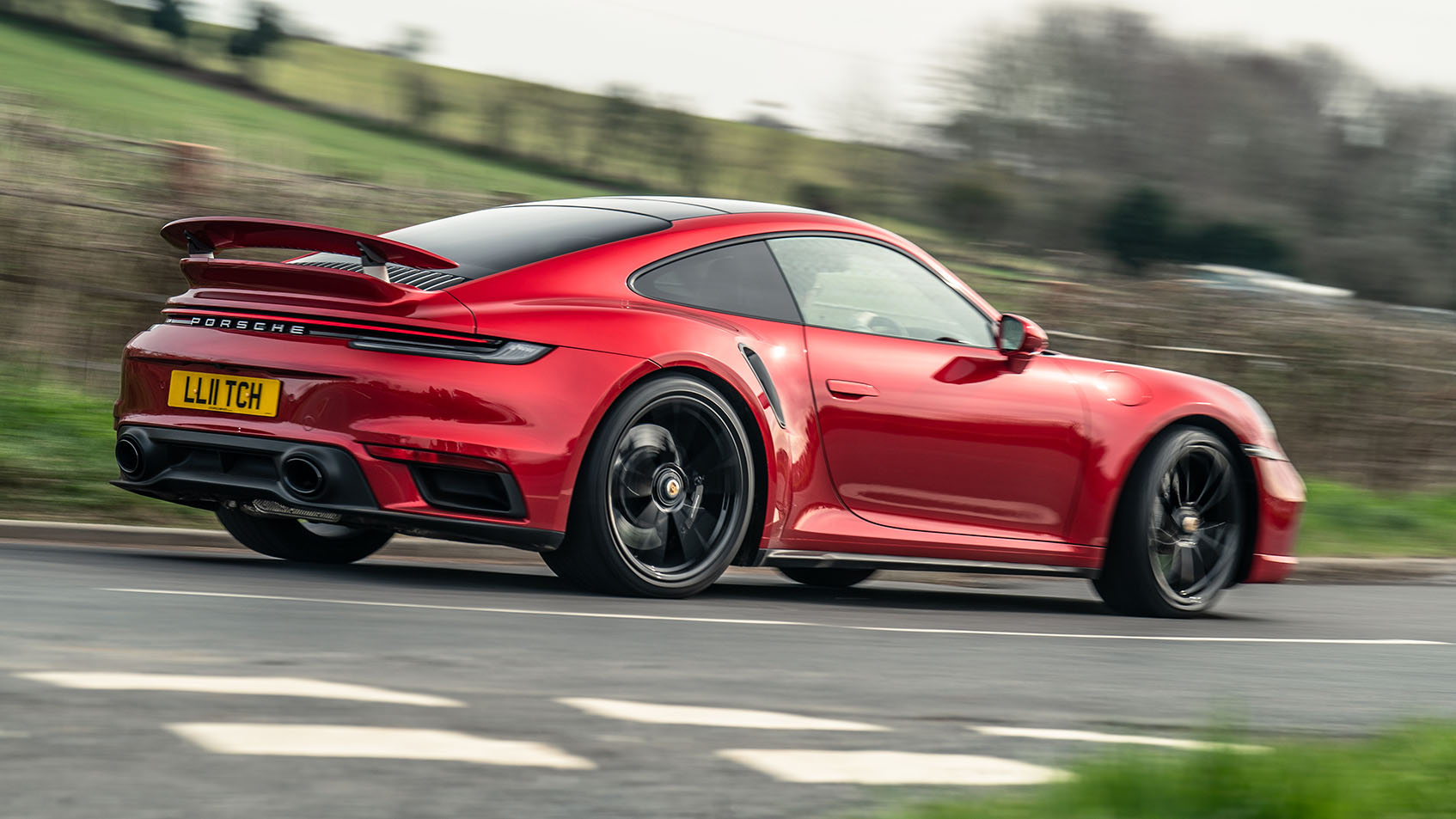 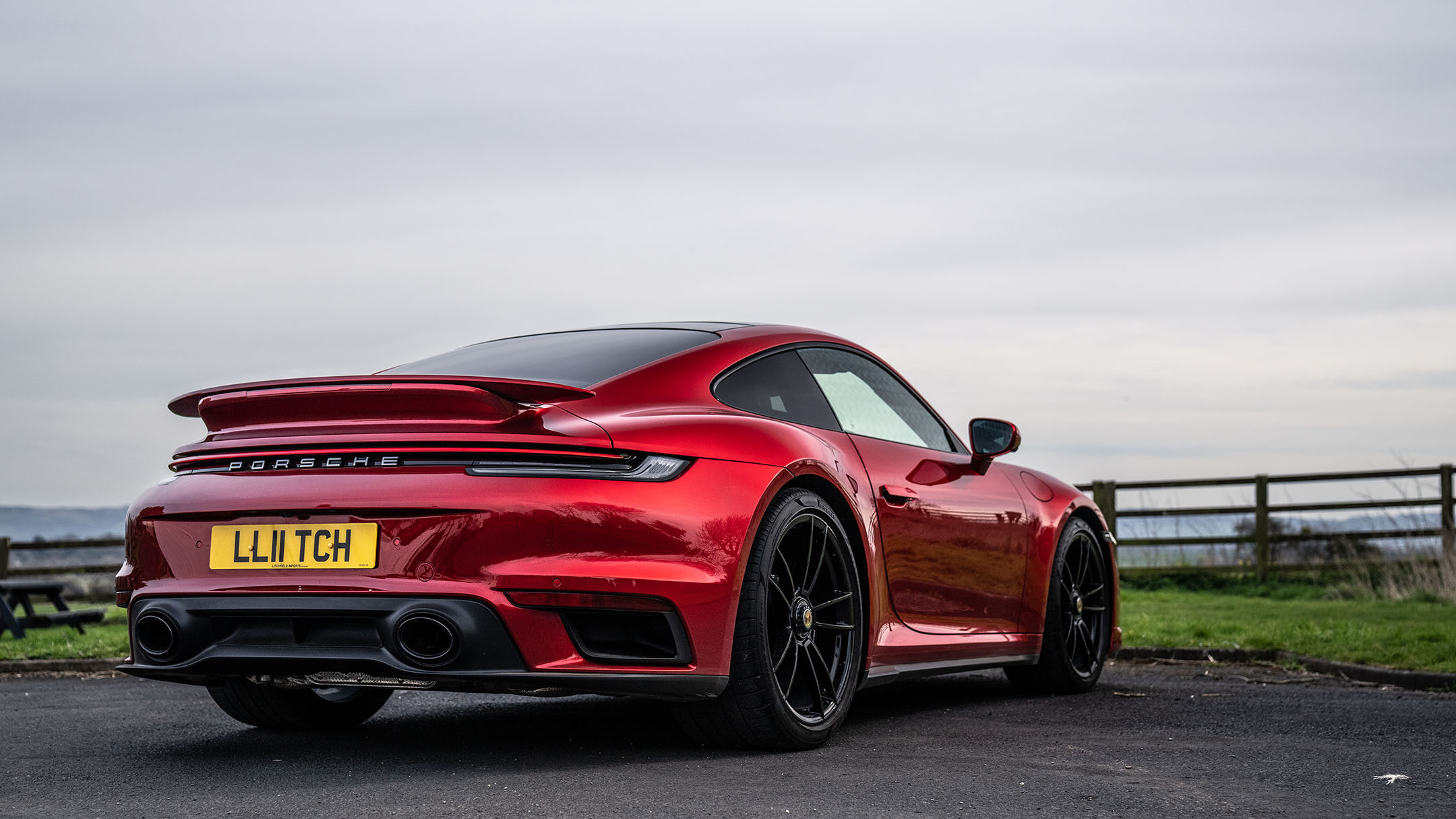 Great question. Top fuel dragster drivers? Astronauts perhaps? The spectacular Turbo S leaves the factory with 641bhp, 590lb ft and is capable of scorching from 0-62mph in under 2.7 seconds. You don’t drive it. You hang on for dear life.

It is, by any standards, a phenomenally fast car – delivering true hypercar performance in a machine that’s comfy on the motorway, can seat a family of four and won’t dislocate the owner’s hip like a cork from a bottle every time they lower themselves into it.

And yet… here we are with a tuned one.

Let’s try not to get too bogged down in ‘who exactly needs a faster 911’ because the fact is all supercars defy logic if you scrutinise them long enough, and quite a lot of human achievement can be put down to a ‘what if…’ attitude. ‘What if we went to the moon?’ ‘What if diseases could be cured?’

This car answers the question ‘what if a 911 Turbo had nearly eight hundred horsepower?’

How did it come to brandish so much booooooooooost?

Thanks to a visit to one of Britain’s premier brake-horsepower boot-camps: Litchfield Motors in Gloucestershire. Iain Litchfield’s namesake company is most closely associated with nutty Nissan GT-Rs, but these days it also does a serious line in uprated BMW M cars (punchy M2s litter the customer car park on the day we visited) and Iain loves working on Porsches, because of the quality of the components and how over-engineered they are. Bodes well for turning up the wick.

He’s been biffing about in this 992 Turbo S for a few months, tweaking, fiddling and finessing. It was bought by the company specifically to investigate how they should go about making a Turbo even faster. Meanwhile, his wife daily-drives a 992 Carrera, which has been poked with Litchfield’s stick until it develops over 500 horsepower. Obviously. 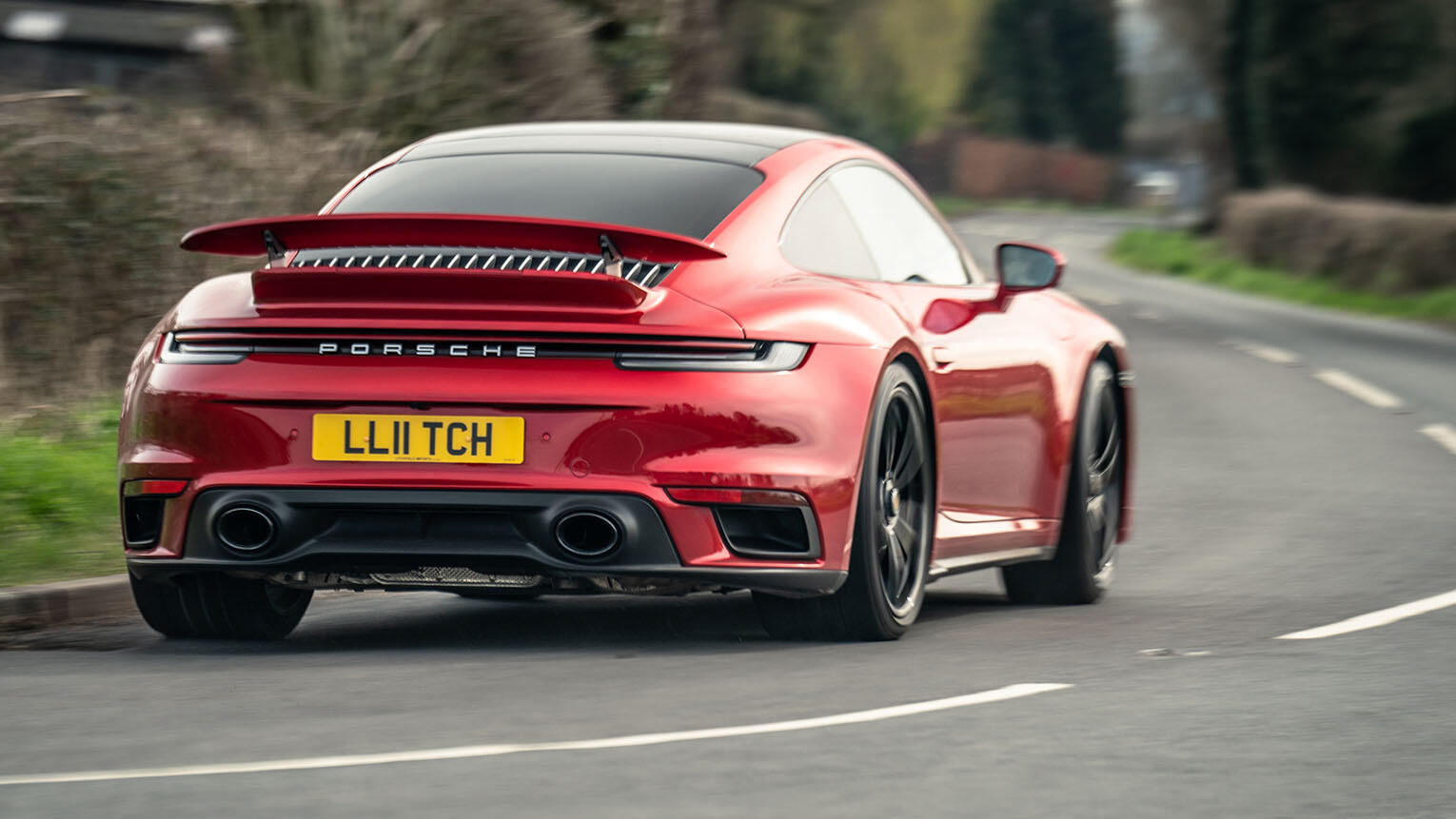 I presume there’s a menu of mechanical mayhem?

Correct. Litchfield will ease you in nice and gently with a simple ECU reflash that instantly lifts the completely standard engine to a dizzy 730bhp.

That’s crackers, right? A different sequence of zeroes and ones unlocks more poke than a McLaren 720S from Porsche’s totally stock 3.0-litre bi-turbo flat-six. And the transmission can take it. Obviously your Porsche dealer warranty goes out the window, but Litchfield’s packages are covered by three years of peace of mind.

Then step up to the Stage 2 package, with a freer-flowing exhaust and performance air filters. Now you’re talking 770bhp. Torque also climbs to 660lb ft.

This particular 992 Turbo has actually been detuned a tad from originally boasting 820bhp, thanks to new F1-grade Inconel exhaust manifolds that also save 8kg. When Iain himself went to figure the car to find out exactly how fast it would go, the 911 was wheelspinning through first and second gear, and still ran a 9.7-second quarter mile on standard tyres. No sticky drag-spec rubber here.

So there are various combinations of tuning to choose from?

That’s right. If you’d just like a throatier noise from your 911 and a mere 25bhp boost, you can just have the titanium exhaust for about £3,594. Add on the Stage 2 kit as per this particular car and it’s about £4,800 worth of work. You now have a car that’ll demolish a McLaren 765LT for less than half the price.

Docile. Normal. Standard. When you’re not going quickly. And I promise you, that’s the most impressive part of this mod. How you simply forget about the volcano jammed up its bottom when you’re just pottering through town, or parking, or creeping along in stop-start traffic.

Left in Normal mode the exhaust isn’t boomy, the throttle response is perfectly manageable and there’s no sense whatsoever you’re in a car that could out accelerate a fighter jet off an aircraft carrier.

Plenty of people can make cars go really fast. But there’s an art to making really fast cars also behave when going slowly. Litchfield has pulled it off so professionally, you find yourself questioning if Porsche is in fact being a bit wimpy. Why doesn’t the 992 get 770bhp from the factory?

I suppose because a 911 Turbo is supposed to be the polite, easy-going face of supercars. Owners might find it a bit shocking to experience wheelspin from their all-wheel-drive business jet. I certainly did.

Even though torque is (sensibly) reined in through first and second gear the Litchfield Turbo S scrabbles and snatches for grip on a dry road. In third, it gives you the full berries and ruthlessly devours the road whole. I’d love to tell you how the digital speedo reels off numbers in chunks and how the rev needle presumably goes into fast-forward above 4,000rpm, but I don’t think I dared look down at the clocks once. The tacho might as well be replaced with a screen that just says ‘BRAKE!’

You’ve got your eyes trained on bends and bumps half a mile away, wondering how much of a lift – or brake – they’ll need. Because they’re coming up very, very quickly, like one of those time-lapse montages from a dash-cam. It’s sensational. You laugh out loud – but only after you’ve lifted off and the blood runs back to your head.

Is it a more entertaining way to go really fast than an EV?

I don’t doubt a Taycan Turbo S delivers an even more sickening gut punch of urgency. But I love that the Litcho Turbo can still catch you out. Though they’ve worked hard on drivability, the 992 Turbo’s latent lag is still here, and something to be enjoyed – it ramps up the anticipation for when the boost hits.

If you’re in the wrong gear, or don’t completely flatten the gas, you won’t get the whole hit. So it still requires a bit of concentration – and bravery – from the driver. EVs don’t.

And you get some interesting noises. More whoops and fizzes from the gulping twin turbos, and a more earnest flat-six crackle from the titanium exhaust. It’s not a nape-prickling noise, but it celebrates turbocharging. You can hear what you’re paying for. 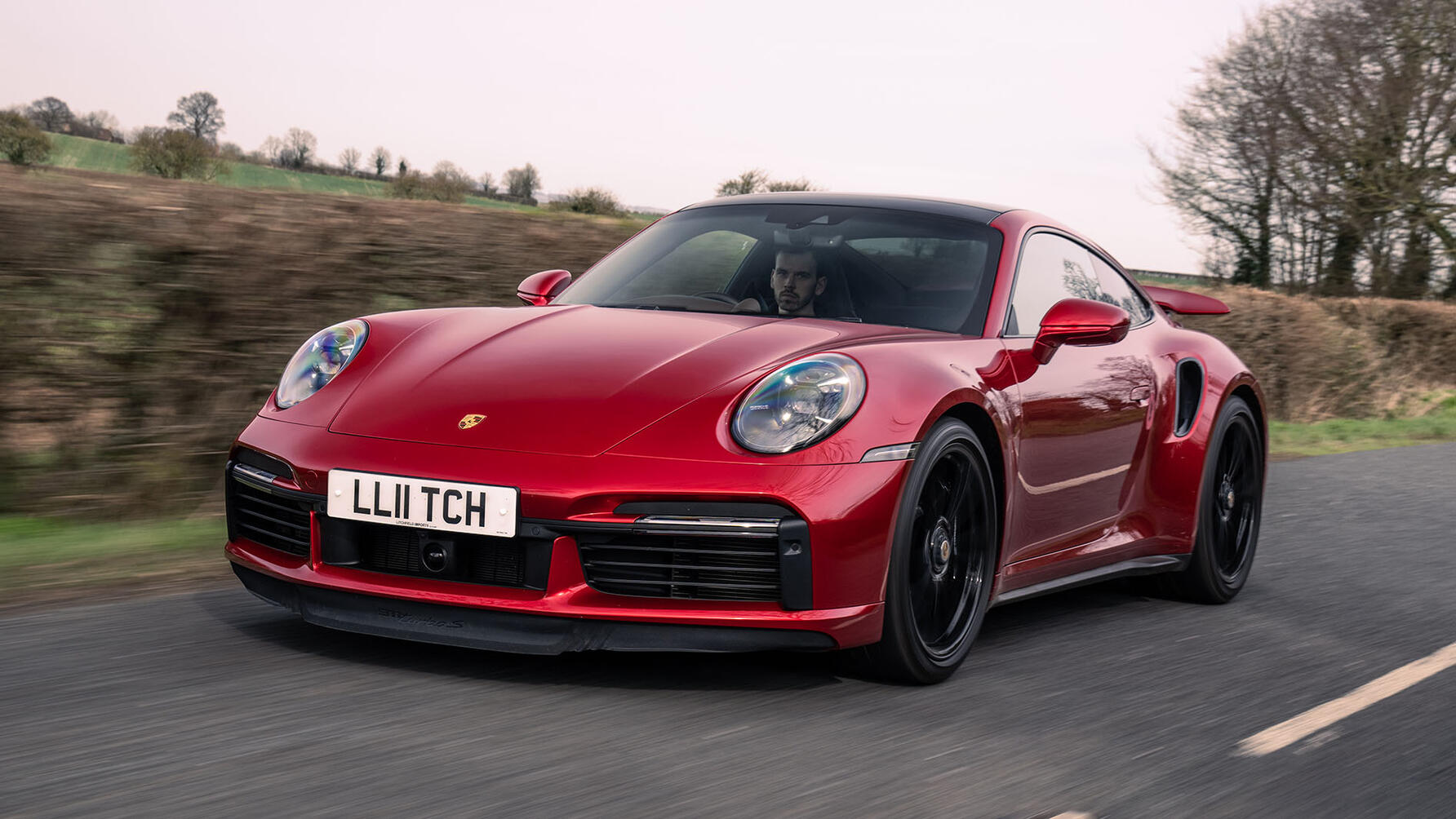 Does the package totally transform the car though?

No – it leaves everything we like about the current Turbo S intact and just makes it stupidly quick. Hypercar quick. The carbon-ceramic brakes remain up to the job of slowing the whole runaway train down. On corner-exit it has a more rear-driven agility than older 911 Turbos – it’s a bit more alive beneath you.

To take these photos, we had to do lots of three-point turns. Accelerate, drive past the camera, brake, turn, go back again. Not friendly mileage to a highly-strung transmission or a fragile drivetrain. But the 911 never grumbled or stuttered.

Settle into a cruise and it’s perfectly normal. I’ve used coffee machines that were more intimidating and tricky. But third gear in this will wake you up more than inkiest-black espresso you can imagine.

I also love that it looks totally standard. No tasteless aftermarket wheels, extra winglets or crude cooling. It's got absolutely nothing to prove.

One last thing: why is it red with brown leather and blue stitching?

Because beneath a very clever spray on-‘wrap’ that can be peeled off when you’re bored of it, this is actually a black 911 Turbo S. And if it’s not to your taste, worry not – it’s already sold. Someone heard about Litchfield’s ultra-Turbo, rang him up, and bought it off him straight away. Doubt he’ll be the last.